Cuba’s food scene is on fire. Exploring the <i> paladares, </i> cantinas and <i>fincas </i> of Havana and beyond 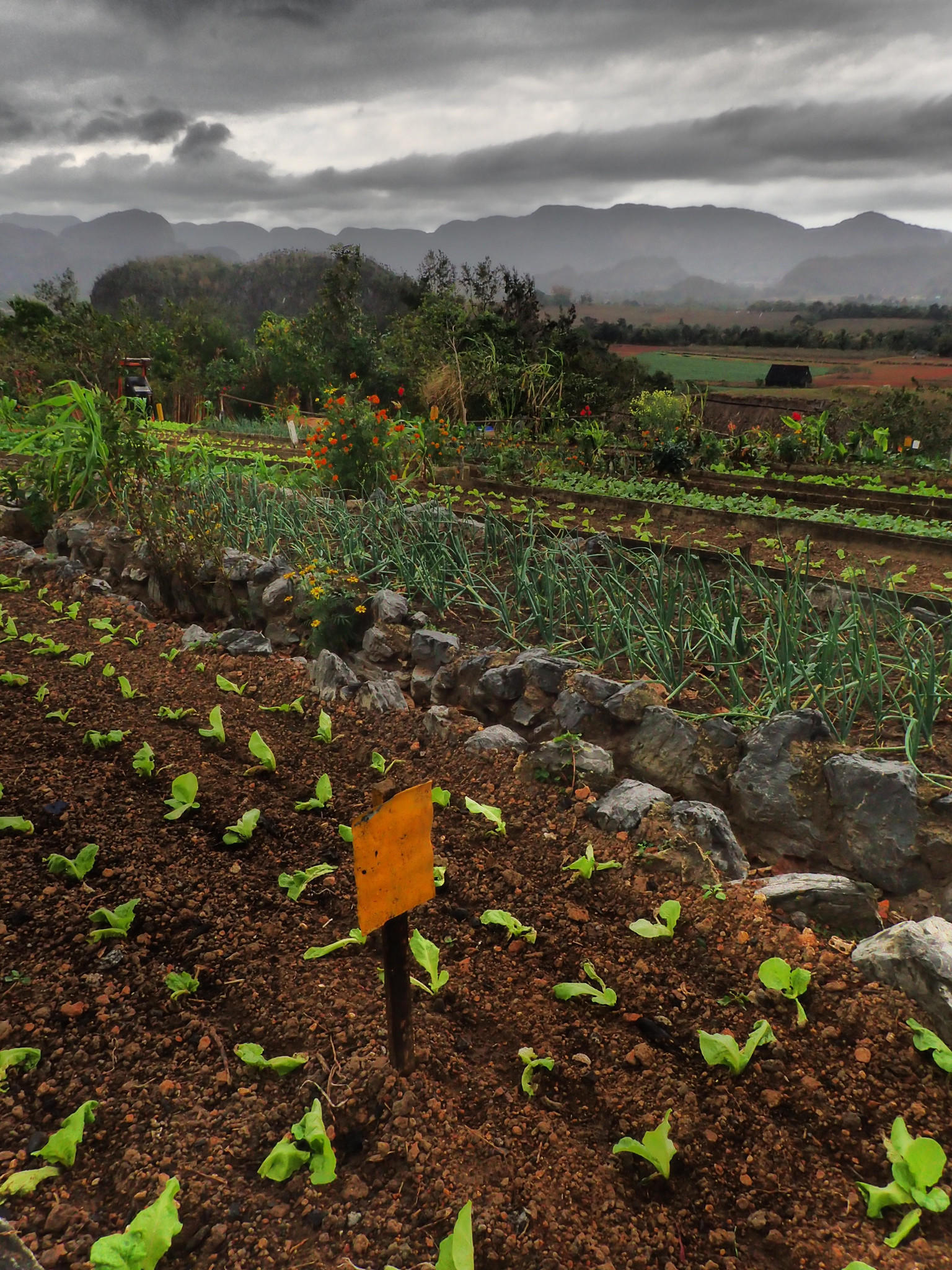 In the tobacco-growing region of Vinales, about three hours west of Havana, there is a vibrant agricultural scene, including this Finca Agroecologica El Paraiso that surrounds the Ecologica restaurant. (Matt Kettmann)

Earlier this year, I started wondering about how Cuba stacked up when it came to one of the primary attractions for the modern globetrotter — cuisine — so I called some folks in the know.

“The food sucks, bro,” said Douglas Rodriguez, a Miami-based chef who first visited the Communist country in 2013 and has returned 15 times. “Everybody says the three worst things in Cuba are breakfast, lunch and dinner. They’re not lying. The most consistent things about Cuba are inconsistencies.”

His sentiments were echoed by Howard Smukler, a Los Angeles attorney who first visited three years ago and now spends much of his free time there. “It’s not really a food country,” he said. “I brought an ice cream maker there a few years ago, and they didn’t have any sugar. I couldn’t believe it.”

And yet both men extolled the virtues of everything cubano, and both are heavily invested in the country’s food culture. Smukler co-owns a vibrant coffee and cocktail bar called Café Arcángel in the heart of Havana, and Rodriguez, the son of Cuban immigrants who is known as the “Godfather of Nuevo Latino Cuisine,” has run Cuban restaurants in America for nearly 30 years. In 2016, he organized a chef exchange program between Miami and Havana, and now leads culinary tours through the country.

So, which was it: horrible or happening?

To find out, I purchased a ticket to visit Havana for five days in late January and then enlisted two friends uniquely qualified for the mission: Chef Dirty, who runs a restaurant in Santa Barbara, and Big G, an avocado farmer who consults from Carpinteria to Salinas.

With a bit more online investigating and the guidance of Rodriguez — “I have some places that I frequent that I trust and are consistent,” he divulged before sharing his valuable tip sheet — I made reservations at some of Havana’s hot spots, rented a centrally located Airbnb apartment and arranged for a couple of day tours to get outside the city.

A number of inventive and often delicious meals later, we found that Havana’s restaurant scene is on the verge of exploding, with some bars and restaurants packed primarily with tourists craving the creative convergence of Cuban culture and global cuisine.

Outside the city, we realized that farm-to-table eating is so ingrained in the island’s rich agricultural heritage that they don’t even realize it’s a thing.

Despite a befuddling array of bureaucratic, economic and political hurdles, Cuba’s culinary scene is progressing at light-speed. (For information on recent changes to U.S. policy concerning travel to Cuba, visit the U.S. Department of Treasury site.)

Cuba’s real restaurant scene started at a snail’s pace in the mid-1990s, when then-leader Fidel Castro allowed private citizens to open businesses in their homes.

But this paladar model — a reference to one’s palate — remained heavily regulated until 2010, when additional reforms by Cuban President Raúl Castro led to exponential growth of such establishments.

An hour after we stepped off of our plane from Miami, my friends and I were hunting for lunch at one such paladar called Chef Ivan Justo. Inside, in what was once a living room, colorful tablecloths and antique bar carts surrounded an extensive menu written on a chalkboard. We opted for a stacked tomato-lobster salad, lime-laced duck ceviche, tuna empanadas and succulent roasted pork, which would accompany almost every meal we would have.

Dessert was the most memorable: cuatro leches custard served in a tiny tin pot. When we told the waitress it was like Mexico’s tres leches, she laughed and said Cubans always have to one-up everybody.

Then we got a quick hello from Ivan Justo himself, who is more of an elder statesman than the tattooed hipster chef usually found in California’s cutting-edge kitchens. We didn’t know it at the time, but Ivan Justo would qualify as our top paladar experience in Havana.

After cigars, rum, live Buena Vista Social Club covers and a nap, we found the address of La Guarida, Havana’s most famous paladar, thanks to its role in the film “Strawberry & Chocolate.”

The downstairs stairwell was ominously empty, but we ascended through the cavernous space to find a bustling restaurant where every seat was filled. This place didn’t look at all like someone’s old house.

Our dinner started with mojitos on the roof. We were then ushered through the labyrinth-like layout to a smaller dining room where the portrait of a saint watched over us. We sipped Spanish wine while feasting on papaya lasagna, octopus carpaccio, tuna tiradita with sweet roe, a classic ropa vieja and, yes, roasted pork with an orange reduction sauce, sliced so that each bite included the moist meat, fluffy fat and crispy skin.

Food-savvy visitors also flock to Casa Miglis, where Swedish film director and music producer Michel Miglis started serving Scandinavian cuisine with a Latin kick in 2012. We jostled past a game of dominoes to get inside and discovered quirky décor: random items such as wrenches and telephones framed and hung as high art, and chairs affixed to the wall of the bar so that they appeared to levitate above the ground.

The highlight of the meal was my gazpacho, which bested many versions I’ve had in Spain, Portugal and California. My Swedish meatballs shone only because of the lingonberry sauce, and the Mexican lamb guajillo stew and beef stroganoff entrees were fine. The Cuban chicken nuggets, about which some rave, weren’t good, and the gloppy aioli offered no salvation.

We finished that evening at Sloppy Joe’s, an American-themed bar staffed by indifferent servers. As we sipped Cristal beers and aged rums, “Our Man in Havana” played on the televisions, including scenes where Alec Guinness, portraying a spy, sat on our very same bar stools, which, like much of Cuba, haven’t changed much at all in 50 years.

To expand my understanding of Cuba’s food culture, I joined a dozen American visitors from Seattle, Washington, D.C., Boston, Chicago and Wisconsin, who were on Access Trip’s eight-day culinary tour. Guided by Yen, we started at a government store in the Vedado district, where Cubans use their ration cards and lower-valued currency to buy staple goods. “This is the saddest part of being Cuban,” she said.

Next door was a farmers market, overflowing with fresh fruits and vegetables both familiar and exotic, such as the orange-fleshed mamey sapote. “We have a lot of food, but we have no way to pay for it,” Yen said when I remarked on the surprising bounty. On the far side, one man chopped meat while smoking a stubby cigar as his neighboring butcher smiled while tossing scraps to a pregnant cat.

After a brief stop at the “mall,” where Miller Lite, from Panama importers, and pressure cookers are hot sellers, we drove west past horse-drawn carts and large tourist buses toward Artemisa. That’s where agricultural economist-turned-organic farmer Fernando Funes runs Finca Marta, which is inspiring a back-to-the-land movement across the Caribbean island.

After working in academics for 20 years, Funes decided to put his money where his mouth was and became a farmer five years ago. He’s since built terraces for various crops, hand-dug a well, started keeping bees and even developed a bio-gas unit that turns livestock manure into power.

“That’s why I started this project, to understand it all,” said Funes, who is writing a book about his farm. “Now this is my research field.”

His tour culminated in a leisurely lunch of vegetables (amazing okra), fresh salad with zesty herb dressing and, yep, roasted pork. For dessert, we enjoyed squash flan with morning glory flowers before Funes sliced off gooey hunks of honeycomb for each of us while we sipped on strong Cuban coffee.

Our next out-of-Havana excursion was to the UNESCO-protected tobacco-growing region of Viñales, about three hours west of Havana. I expected the region’s landscape of mogotes (mountainous limestone plugs full of caves), red-tile roofs and colorful facades to be beautiful and the cigar demos to be informative.

But I had clue that we’d find culinary awesomeness as well in the form of Ecológica (also known as Finca Agroecológica El Paraíso), where brightly colored terraced gardens of fruit, vegetables and herbs descend from all sides of the open-aired, wood-framed restaurant.

In fact, the lunch at Ecológica was the culinary apex of our trip, from the rum-spiked “anti-stress” cocktail of pineapple, coconut milk, cinnamon, lemongrass and mint to the rich-in-flavor yet light-in-body vegetable soup.

Add cassava papadums, plantain chips, a variety of vegetable and fruit preparations, spicy fish, grilled chicken, chunky ropa vieja (instead of the usual stringy variety) and, of course, the roasted pig laid out and chopped before our eyes, and it was hard to disagree with Big G, who muttered, “Whoa, this is gluttonous.”

After dessert, Chef Dirty asked to see how the pig was roasted. We walked through the garden, where moringa and annatto trees shaded taro root and ginger plants, to reach a modest shack. Inside, heat battled smoke for attention, and a man wearing a straw hat and a Pink Floyd tour T-shirt from 1973 showed us how he cooked pig after pig for the busloads of visitors that arrived every day.

We’d yet to hop in one of the classic American cars that rumble around Havana. So one afternoon, we hired a white convertible to take us to Cojímar, a seaside suburb about 15 minutes east of Havana where Ernest Hemingway used to launch his fishing boat, the Pilar. We started with cocktails at La Terraza, Hemingway’s favorite lunch spot — the author’s likeness is displayed everywhere — and were serenaded by a trio that played “Hotel California” as we enjoyed escabeche, a tangy and refreshing pickled fish dish.

We then walked past tourist shops (way cheaper than in Havana) along the rocky seashore, and by young skateboarders bombing the town’s steepest hill. Near the crest was Café Ajiaco, which chef Rodriguez believes is “rescuing classic Cuban dishes.”

The menu features an extensive explanation of the establishment’s mission, including that it opened on Aug. 15, 2011, to celebrate the anniversary of the founding of Baracoa, the hometown of the owners.

Our meal started with the house mojito, its mint, soda and rum enhanced by honey and a tiny pepper, and an appetizer spread with crispy fish croquettes, beef-filled plantain cups and ceviche-topped chips.

But amid all of Café Ajiaco’s wonders — and its engaging servers, who included a former sports journalist who makes more money waiting tables — was my favorite dish of the trip: the malanga, or taro root, soup, topped with a swirl of cilantro oil and fried, crouton-like garlic chunks.

It was creamy without being milky, savory while zesty, and unique to my palate but universally satisfying. Best of all, it incorporated modern techniques yet was proudly traditional, the exact combination I’d come to Cuba to find.

THE BEST WAY TO HAVANA

Taxi service from the airport to central Havana costs about $30 and can often be arranged through your accommodations. Much ado is made of the visa process, but it’s easy. Buy one for $85 from Cuba Visa Services. Just fill it out carefully, or you’ll need to buy a new and more expensive one at the airport. For information, visit the Department of State site.

To call the numbers below from the U.S., dial 011 (the international dialing code), 53 (the country code for Cuba) and the local number.

Frugal or adventurous travelers should search out casas particulares, which are rooms or entire homes. Many are listed on Airbnb.com, and they range widely in price. Our four-night stay at the two-bedroom Casayami was just $83 a night and came with homemade breakfast each morning.

WHERE TO EAT AND DRINK

Culinary-focused tours include those offered by Access Trips and D-Rod Culinary Adventures, with chef Douglas Rodriguez.