In this ‘weird, lost corner of America,’ the beach of your dreams awaits in the most remote national park 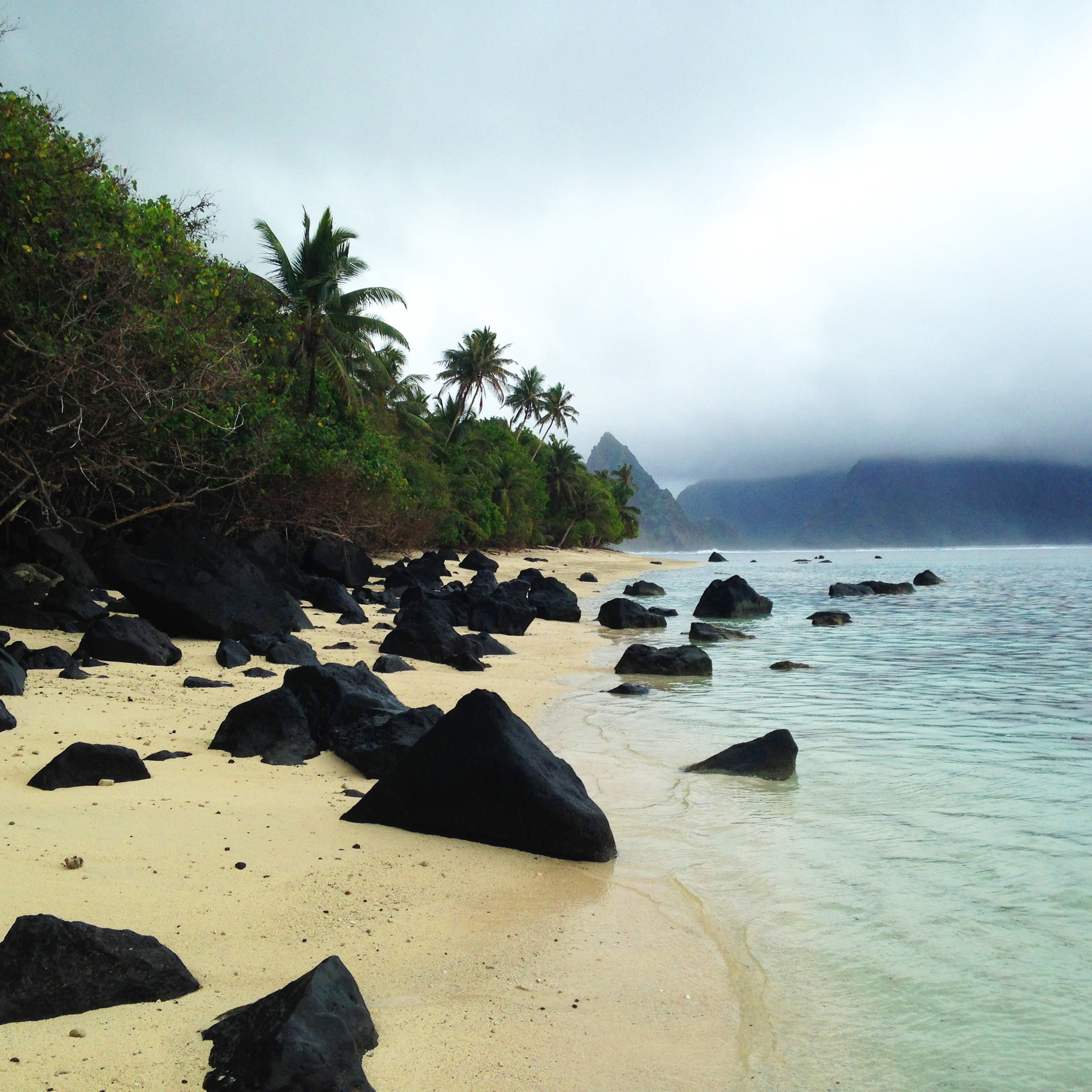 Ofu Lagoon, on Ofu Island, is perhaps the most scenic spot in the National Park of American Samoa. (Christopher Reynolds / Los Angeles Times)

Even for a Saturday in the South Pacific, this was a sleepy morning.

On American Samoa’s main island of Tutuila and its neighbor, Ofu, villages were still, beaches empty.

On the west coast of nearby Ta’u, a battered little fishing boat sidled up to the wharf, and a pale stranger stepped off, looking half-queasy and half-euphoric, a bagged octopus in his left hand.

That was me on Day 6 at America’s most far-flung national park.

National Park of American Samoa, 2,600 miles southwest of Hawaii, is spread over parts of Tutuila, Ta’u and Ofu. It attracted 13,892 visitors last year, about what Yosemite gets in a summer day.

Probably fewer than 300 of them found their way to the park’s greatest asset, a beach on Ofu with creamy sands, volcanic boulders, serrated mountain ridges and turquoise shallows — but I’m getting ahead of myself.

This park gets so few visitors for many reasons, including the 11 hours of flying time from California, the exasperating transportation links among the islands, the territory’s scant infrastructure and its mosquitoes, some of which transmit dengue fever and Zika virus.

Although the park does have rangers, trails and a few miles of road, there are no campgrounds or lodgings, no snack bar, no shuttle buses, no entrance gate, no admission fee — few of the conventions that Americans imagine when they hear the words “national park.”

“It’s probably the most remote culture you can visit that’s still in the U.S.,” park superintendent Scott Burch told me on my visit in October 2015. “It’s the only paleotropical rain forest in the U.S.

“My first couple of hikes around here — it was just a wonderland of things I’d never seen.”

I found Burch at the park service’s modest visitor center in downtown Pago Pago, the center of commerce on Tutuila, population about 55,000.

Once he briefed me about the park’s 9,000 or so acres of rain forest and about 4,000 acres of coral reefs, he moved on to the flying foxes (a.k.a. fruit bats) that steal bananas and papayas from his patio; the crown-of-thorns starfish that gobble coral and wear a fearsome exoskeleton of venomous spikes; and the giant coconut crab, which climbs trees, weighs as much as 9 pounds, looks like “the world’s largest bug” and is prized as a delicacy.

I was eager to meet them all, especially after it became clear that Pago Pago (pronounced Pango Pango) isn’t nearly as pretty as its name.

Although Tutuila gets regular flights from Honolulu and Apia (the capital of independent Samoa, its own country about 75 miles northwest) and one or two cruise ships a month, tourism peaked decades ago.

As you scan the roadside while you rumble along the main drag in a bus, it’s tough to know which buildings were scarred by the tsunami of 2009 and which have been fading for decades.

The churches stay busy, and the rain forest is full of breadfruit, taro, bananas, coconuts, mangoes and papayas so nobody goes hungry. But private-sector jobs are rare, and incomes are about $24,000 per household, less than half the U.S. average.

There are fuel shortages, water-quality questions, Internet outages, many stray dogs and few hotels or restaurants.

The scent of tuna hangs in the air. (Or it did. In mid-December, one of the island’s two tuna-processing plants closed indefinitely.)

But once you’re on country roads, hearing the flying foxes shriek in the treetops, things get better.

Outside the park at Tisa’s Barefoot Bar on the southern coast of Tutuila, proprietors Tisa Fa’amuli and Candyman joined me on the deck for a drink and snack while stray coconuts tumbled in the tide.

Inside the park on the island’s northern coast, ranger Pua Tuaua took me hiking on the Lower Sauma Ridge Trail, grabbed a coconut, split it and reminded me that plants and animals aren’t the only reason there’s a national park on these islands: Fa’asamoa — the Samoan way— may be the oldest culture in Polynesia.

Despite the many changes brought by English missionaries in the 19th century and U.S. government in the 20th, fa’asamoa remains remarkably strong.

And Samoan discipline and physical toughness might be why the islands send so many recruits to the U.S. Army and the NFL.

The Samoan way has definitely made life more interesting for the park service. Because Samoan custom forbids real-estate sales to outsiders, the only way the NPS could set up shop here in 1993, five years after Congress authorized creation of the park, was to negotiate 50-year leases with several local villages.

The deal gives villagers $600,000 a year in revenue, which makes this the only full-fledged national park that’s basically a rental. In all, the NPS spends about $2 million a year to run the park.

On the next leg of my trip, a 60-mile hop to the island of Ofu on Polynesian Airlines, I saw why the park service had been eager to gain a toehold here.

As our Twin Otter swooped, I could see coral gardens lining the beach and a 1,000-foot-high ridge of solid rain forest looming above. The airstrip was wedged in between.

“It’s this weird lost corner of America,” Terry Skaggs told me on the phone from his home in Rock Island, Ill.

Skaggs has visited Ofu more than 20 times since 1999 and does pro bono website work for the Vaoto Lodge. I called him before my visit to get advice. He had warned me about Pago Pago and the general state of transportation and communication.

But when it came to Ofu, he said, “The minute I stepped off that plane I knew I was in love.”

Fifty paces from the landing strip stood the eight-room, cinder-block Vaoto Lodge, my home for the next two nights, and innkeeper Deborah Malae, whose family built the place.

Malae had saved my trip by snagging me a seat on the flight to Ofu. (Polynesian Airlines’ phone number and email address were no help.) Now she showed me my room ($80 a night) and pointed me toward the beach, a 10-minute walk.

Ofu looked like a movie set abandoned by its cast. There are a couple of villages with a combined population of about 200, a handful of vehicles, a few miles of road, no scuba facilities and probably more abandoned homes than occupied ones. Black boulders pepper the shoreline.

And Ofu Beach — well, this was the reason I flew 5,000 miles. It’s the beach at the end of the world — the loneliest, most evocative, tantalizing stretch of shoreline I’ve ever seen.

“I can go there and be on the reef all day and never see another human being,” Skaggs had told me. “Ofu’s reef has ruined snorkeling for me.”

I would love to tell you I saw Ofu Beach under perfect blue skies, but the truth is that I caught it under two days of almost solid cloud cover with intermittent rain. I hardly minded.

I spent just about every minute I could in that warm, gentle water with a snorkel and mask, chasing after Blue Devils and Neon Damselfish.

I didn’t recognize any crown-of-thorns starfish, but when I spotted the angular silhouettes of a few frigate birds gliding overhead as if dinosaur days had never ended, I figured the next arrival might be a stegosaurus stomping out of the jungle.

I walked the length of the beach and back, about two miles. Sure enough, nobody but me.

“When I was small, I wanted to get off-island. Then I went,” park ranger John Sua told me later that day.

After a little while in Hawaii, he decided that “this is all going too fast.” He came back and got a job with with the park service.

Now he maintains trails, works at the Ofu Ranger Station near the airstrip and occasionally takes visitors across the one-lane bridge to the adjacent island of Olosega.

We did the trip across the bridge, then hiked to Oge Beach, watched a plucky band of crabs fend off repeated attacks by a moray eel and spotted a 4-foot-long blacktip reef shark lurking in the shallows.

I could easily have filled another day or two exploring Ofu, but the island of Ta’u and my itinerary were calling.

The next morning, Malae handed me a gift for her cousin Moki — an octopus for an upcoming feast day. Then she sent me to meet two fishermen who would carry me to the last leg of my adventure.

It’s a famous place, if you’re an anthropologist.

Ta’u is where Margaret Mead did her controversial research on adolescent island girls for her 1928 book “Coming of Age in Samoa.”

The population nowadays is probably south of 200. Many abandoned homes. No bank. No hospital. No hotels despite the six flights weekly between the island’s Fiti’uta Airport and Pago Pago.

If a visitor should want to come, the park service keeps a list of residents willing to host homestays.

I was happy to see the wharf at Ta’u after 90 minutes at sea, clinging to the slick deck of the 18-foot vessel.

Sure enough, there was Moki Malae, grinning kindly with a few of her relatives. They greeted me, took custody of the squishy cargo and drove me to the other end of the island, where Eseta Kese, a homestay hostess, set me up in a spare bedroom.

She took me walking into national park territory on the Si’u Point Trail near Saua, said to be the birthplace of Polynesian culture 3,000 years ago, also said by many Samoans to be haunted.

A mile or two from where we walked, Lata Mountain rises 3,170 feet. When there’s enough water, the mountainside’s Laufuti Falls sends down a 1,000-foot shower.

But this week there was too much water — I couldn’t see the cliffs and the ground was so muddy, I gave up on hiking to the waterfall.

Still, those two days I spent on sleepy little Ta’u were plenty busy.

Meli Ali’itaeao, the shopkeeper, made me breakfast.

Ted Leiato, a supervisor for the American Samoa Power Authority, showed me a solar installation and taught me how to taste cacao fruit off the tree.

Moki Malae saved a seat for me at church, where I saw and heard dozens of children, all clad in white, sing a tune that sounded like “Down by the Riverside” in Samoan.

We ate with Leiato and a few other utility workers. It was an epic meal, yielding a vast pile of shattered crab shells. Then we watched NFL football on a big-screen TV.

In the Pacific and beyond, many islands are parks

Among the full-fledged parks on islands:

American Samoa National Park. Added in 1988. Acreage: about 9,500 acres on Tutuila and neighboring islands, plus about 4,000 acres of coral reefs.

Virgin Islands National Park, U.S. Virgin Islands. Added in 1956. Acreage: 14,948. Caribbean island with plantation history. Includes most of the island of St. John and almost all of neighboring Hassel Island.

Some other far-flung NPS units:

THE BEST WAY TO AMERICAN SAMOA

For travel between Ofu and Ta’u, hiring a fishing boat is often the only option.

Before traveling to American Samoa, visitors should study up on logistics and customs. While here, travelers are advised to dress modestly and seek permission before taking photographs.

Best time to visit: There’s less rain from May through October. Year-round, daytime highs are usually in the 80s, overnight lows in the 70s.

Where to sleep: On Tutuila, the Tradewinds Hotel is a mostly business lodging with restaurant near the airport. Doubles $156, more for suites.

I heard good things about the Moana O Sina Lodge in Fogagogo Village, but didn’t get there.

To encourage homestays with families on Tutuila, Ofu or Ta’u, park rangers maintain a list of about a dozen host households.

Born and raised in California, Christopher Reynolds has written about travel, the outdoors, arts and culture for the Los Angeles Times since 1990.