L.A. Auto Show: Favorite cars, craziest concepts and everything you need to see

The media-only days of the Los Angeles Auto Show have come to a close and the show is now open to the public. Catch up on our preview of what show-goers will find below and read even more, including more analysis (will we even own cars in the future?), on our Autos page.

Highlights from the show:

"Alfa was one of the greatest car brands in the world and it completely lost track when it was integrated into Fiat in the 1970s," Wester explains.

Fiat was looking for industrial synergies and took the spirit out of Alfa Romeo by using the same parts and components and approach it took with pedestrian Fiats.

Alfa still made cars that looked good, but they drove like Fiats, and that's not a compliment, Wester says.

Look for the range of Alfa Romeos coming to the U.S. market over the next four years to be stand alone models that will compete with the BMW 3-Series, the Mercedes-Benz C class and more expensive vehicles.

He's also going to be sure that Maserati, which is making a big sales resurgence in the U.S., also has models that won't overlap with Alfa Romeo. It will be the top brand in the Fiat Chrysler Automobiles portfolio. The cost behind self-driving cars

Amid all the buzz about self-driving cars, it's easy to forget the extra costs that might come with them.

All the software and mapping services needed to run autonomous cars will need to be updated regularly. But will those updates be free, bundled into the cost of the car or an annual fee tacked on after a few years of free service?

"The business models are going to be changing," Ogi Redzic, vice president of Nokia HERE's connected driving unit, said in an interview at the auto show Thursday. "Cars will go from a depreciating assest to an ongoing service."

That's why automakers are watching all the emerging ways of doing business closely. Redzic said he's especially a fan of the idea of subscribing to his favorite automaker for a monthly fee to use the company's car whenever he wants but not having to own it, store it or care for it.

Redzic, part of a group developing software to power services in self-driving cars, also expects the technology to user changes in auto insurance (making it based on where you drive rather than where you live) and display technology in vehicles (virtual overlays as you stare out at the world).

A test drive in the Audi Prologue concept car

Sooo I just drove this #Audi #Prologue #concept (future #A9) from the #laautoshow. Story soon.

Mitsubishi, you have fans among the critics

Fun things to do besides look at cars 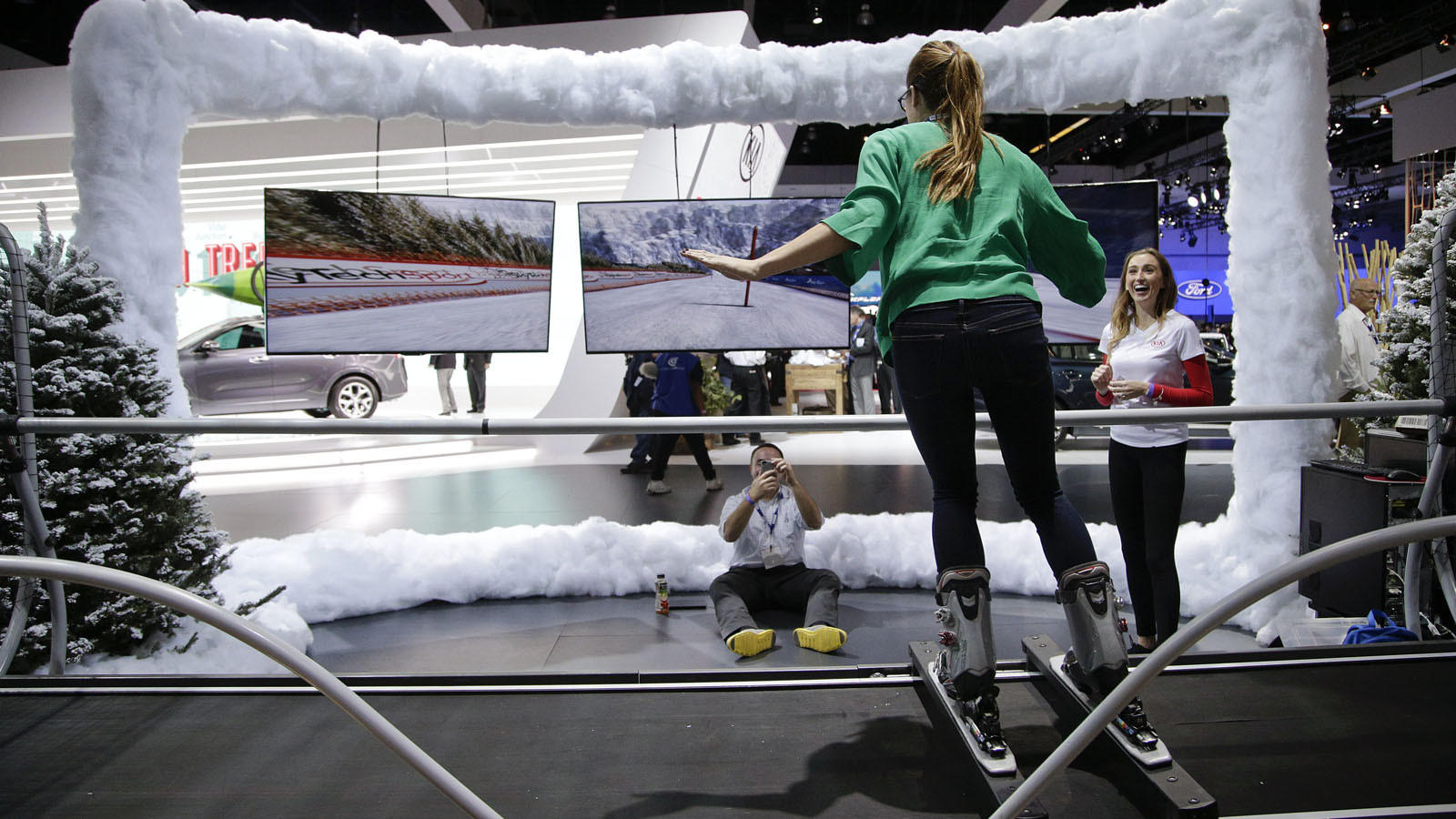 Dodge is featuring a driving simulator that allows two drivers -- one in a Dodge Charger, one in a Dodge Challenger -- to go head to head sitting in the actual vehicles, which rise, tilt and roar their way down a simulated track. Those who've tried it say it's harder than it looks, and harder than real driving. Several drivers in a row could not keep the cars from crashing, in fact, and would have destroyed actual vehicles.

Less high-tech, and less difficult, is a similar driving simulation at Hyundai. Drivers there were having less difficulty keeping on the track, but also looked a little bored.

Over at Toyota, you can make your own paper airplane and try to throw it into a target on the bed of a Tundra pickup -- because, see, it was a Tundra that pulled the space shuttle Challenger through the streets of Los Angeles. Get it?

Google, Apple compete for your dashboard

The tech giants have partnered with automakers to bring technology into vehicles that’s familiar and intuitive. Both sides are hoping to solve a problem that has been vexing drivers for years: The inability to easily and safely access smartphone apps and functions in the car.

So these days, in-dash infotainment systems are essentially extensions of your phone.

It’s a big change in approach for the car industry. The first wave of in-dash systems were typically developed in-house by automakers and flopped because they were balky, confusing and relied on technology that quickly became outdated.

'I don't get it': AutoNation CEO on dealer fight with Tesla

Tesla’s direct-to-customer sales in the U.S. are almost immeasurable — just 15,500 cars while dealers have sold 13.7-million cars so far this year.

Nonetheless, the National Auto Dealers Assn. has launched a major marketing campaign to shore up its turf. It defends dealers as an important source for price competition for consumers and also as valuable economic and community pillars.

The "militant" efforts by dealers is a bad tactic, said Mike Jackson, chief executive of AutoNation, the biggest operator of car showrooms in the U.S.

You have dealers, entrepreneurial, free-enterprise guys, arguing for government protection,” Jackson said while visiting the Los Angeles Auto Show on Wednesday. “I don’t get it.”

Nissan trotted out USC Hall of Famer, Heisman Trophy winner and former NFL star Marcus Allen to showcase how Juke buyers will be able to personalize the car's colors.

On stage, Allen said an orange-and-silver-themed Juke wasn't really for him. So Nissan unveiled a Juke painted cardinal red and gold and decorated with USC logos.

"That’s more like it," Allen said before being surrounded by phototakers. 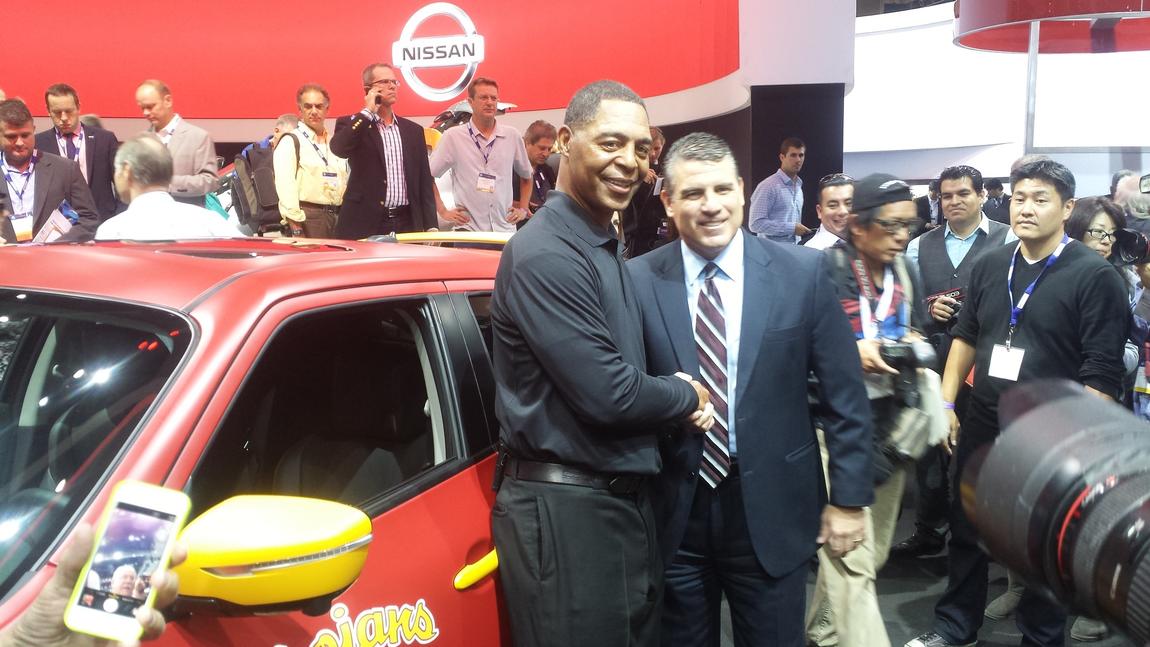 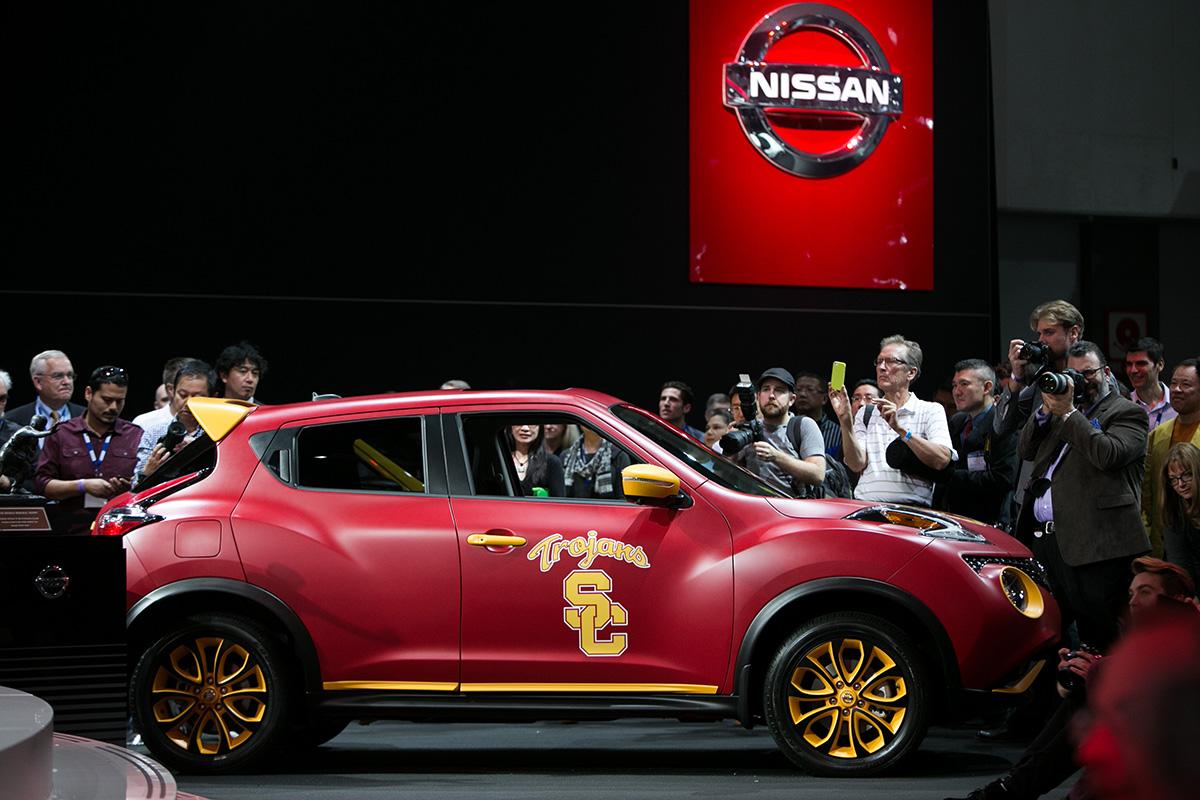 The thinking behind Mazda's CX-3

An app that connects to your fuel tank

An app that can read a vehicle's fuel level and recommend the best time and place to fill up on gas won Ford's contest to develop in-car apps, the automaker announced at the auto show Wednesday.

FuelSignal beat out nine other competitors, including apps built by teams from Kelley Blue Book, IBM and Concur.

Ford didn't say when FuelSignal might start appearing inside its cars, but the start-up will get to show of its creation alongside Ford at the Consumer Electronics Show in January.

The app also lets people pay for the gas through a mobile wallet. FuelSignal's existing app for Android and Apple devices has many of the same features, but of course, lacks the ability to monitor a car's fuel tank. It should be fast enough.
Henrik Fisker on the 725-horsepower Galpin-Fisker Rocker

BMW's i3: A sports car with a conscience 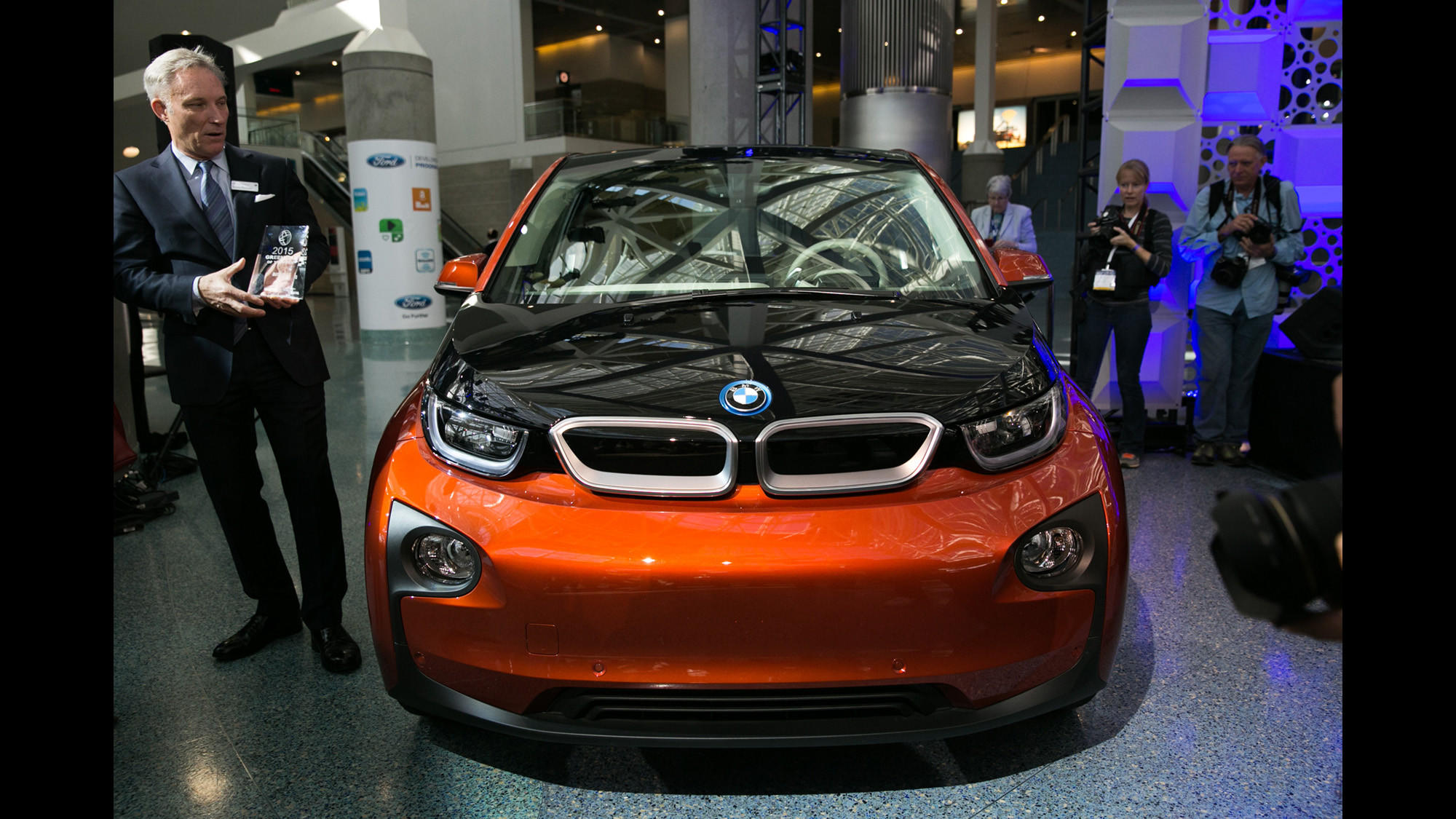 The all-electric plug-in vehicle is a high-performance sports car with a conscience.

The $42,275 German runabout, which has an electric motor capable of producing the equivalent of 170 horsepower and 184 pound-feet of torque, has a range of 80 to 100 miles.

Accepting the award, company spokesman Thomas Plucinsky said: "The i3 began as an idea in 2007. We had to build for plants on two continents to make it happen, and now we are here. Our friends back in Munich will be very happy." 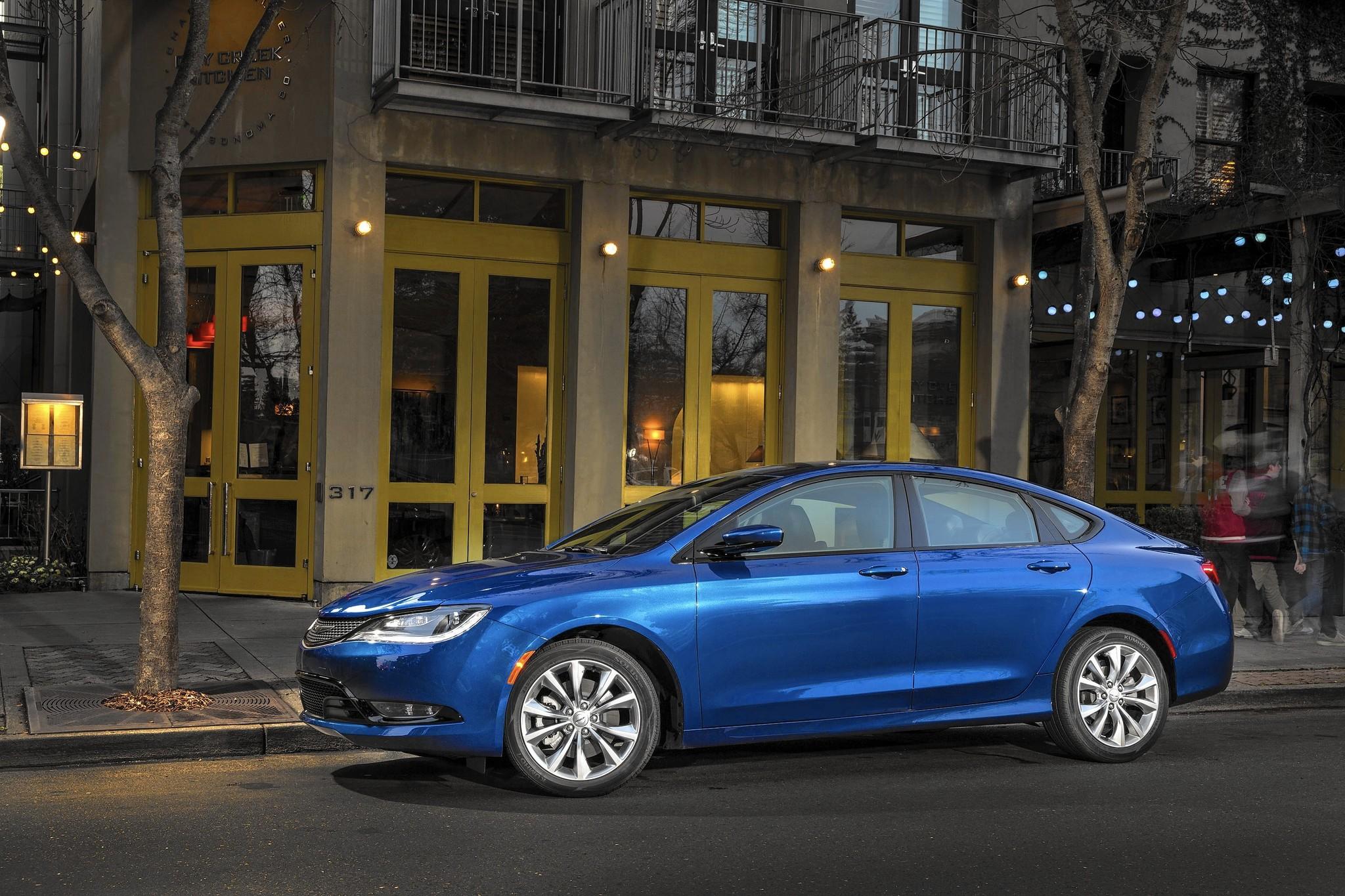 Many vehicles now come standard with features that will monitor blind spots, warn a driver against drifting out of a lane, or emit beeps or seat vibrations if an object is too close for safety.

Others have adaptive cruise control, a technology that can read traffic conditions and automatically direct the car to slow down or speed up. More advanced systems, using combinations of radar, sonar and GPS, can detect an impending wreck and take emergency action, such as slamming on the brakes.

Some automakers are developing advanced parking systems as a precursor to self-driving. Audi, for instance, is developing a technology that enables a driver to leave the vehicle while it parks itself.

That isn't on the market yet, but Audi, Lexus and other companies already offer vehicles that have varying degrees of "Look Ma, no hands" parking capability. The 2015 Chrysler 200 and Jeep Cherokees will parallel park a car with the driver controlling only the gas and brake.

Lexus' yellow paint is the only concept here 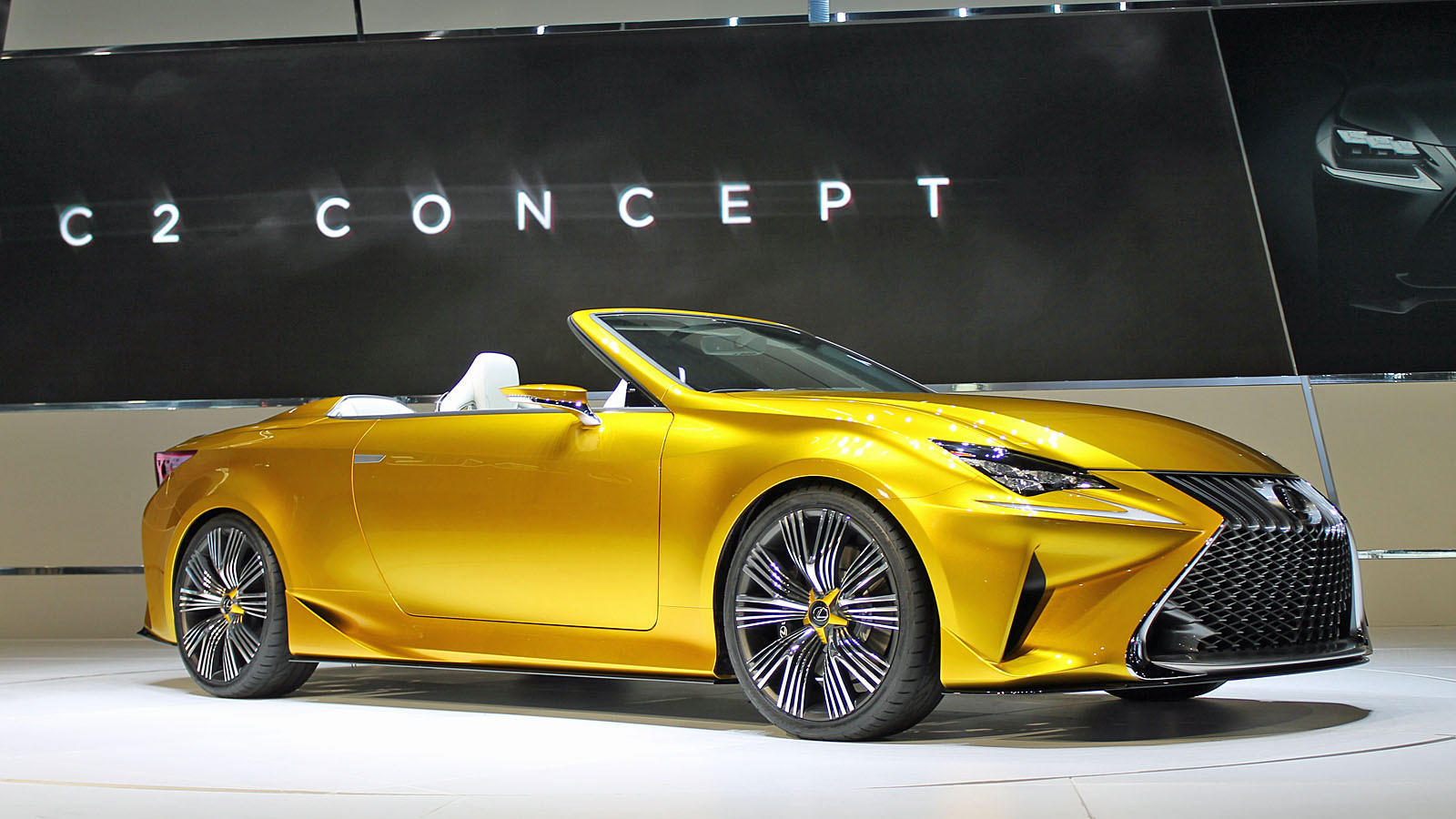 Rotating on a stand at the Lexus booth this year is a metallic yellow concept convertible called the LF-C2. But don't pay attention to that name. This is a thinly-veiled look at a forthcoming convertible version of the Lexus RC coupe that recently went on sale. Lexus hasn't officially confirmed a convertible variant, but bet on it. The RC Coupe is a direct competitor to BMW's 4-Series and Audi's A5, both of which have topless versions. And Lexus doesn't have a convertible anywhere in its lineup right now, unless you count the older version of the IS it still sells in small numbers. The yellow paint, however, may stay in concept form only.

A Fiat for Americans: the 500x

The Fiat 500x is a new crossover vehicle that the Italian automaker says is its answer to the American market. Four years after its debut, the Nissan Juke is back with a refreshed look, a torquier and more efficient engine, and a pair of performance models going under the name Nismo.

The car show as pick-up scene

#Spotted: #Tindering at the #LAAutoShow // Cant blame 'em. Quite the dapper crowd.

Corvette Z06, supercharged within an inch of its life 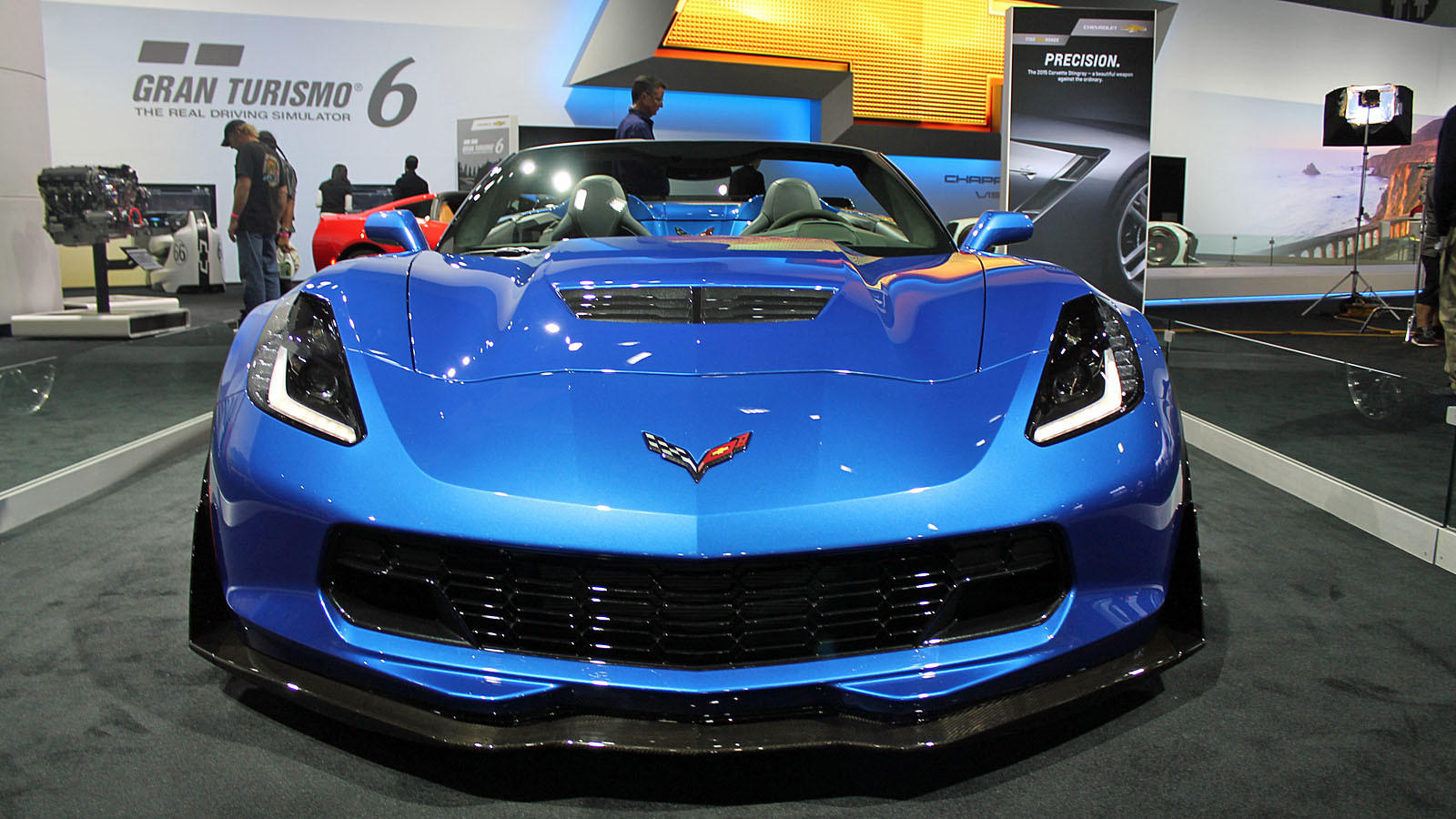 Volvo gets it right with touchscreen 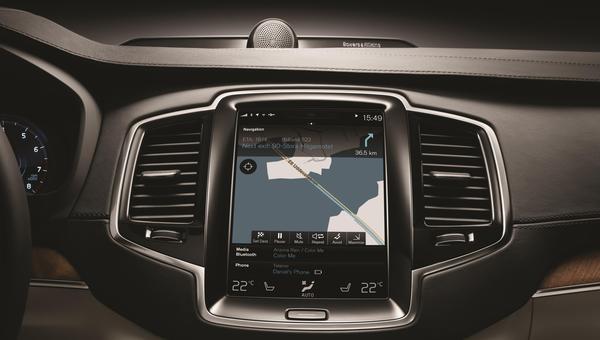 Just spend a couple of minutes poking the new touchscreen infotainment system of the Volvo XC90 SUV that's going on sale in the middle of 2015. They got it right. Real buttons where they should be, and a screen that not only responds to your touches, but is well-organized, intuitive, and has a display and graphics that aren't overly styled. Clearly they were paying attention to the massive screen inside the Tesla Model S. -- David Undercoffler

The top five cars of the show

Once the stepchild of the auto show circuit, the Los Angeles Auto Show is now among the premier shows in the world. Times editors sorted through the show's 30 world debuts and 30 North American debuts to select five standouts. Some might surprise you. -- Times auto staff

Catering to California's need for speed A gas tank between your legs. What could go wrong?

Bad idea No. 1. Who wants to drive with gas tank between their legs? Seen @laautoshow pic.twitter.com/AdxsoY35fl

BMW i3: Green car of the year

Inside peek of the BMW i3, 2015 green car of the year. #LAAutoShow pic.twitter.com/WcL2BX3Eqq

Volvo's V60, go camping or go to a movie 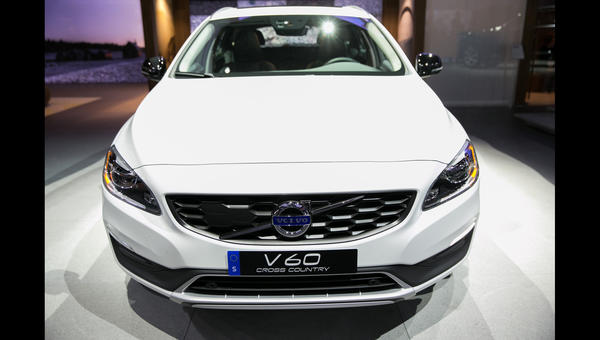 When Volvo uses “cross country” in the name of the V60, it means it. The all-wheel-drive wagon features increased ground clearance, front and rear skid plates and rear, side scuff plates and fender extenders. This is a family hauler designed for a dirt trek to a remote camping site or dinner and theater in the city.

The V60, for example, comes standard with “Hill Descent Control,” which manages the wagon's speed automatically when heading down steep inclines, allowing the driver to focus on steering and looking for hazards.

Jaguar Land Rover took over the Pacific Design Center in West Hollywood and built an obstacle course to show off the Sport and other Land Rovers, like the LR4.

They even offered demonstration rides, putting potential owners in the driver's seat as the Land Rovers crept over a creaky "third world bridge," bogged down in deep sand, forded a river, threaded through simulated boulders, climbed a steep ridge and then splashed down through a water crossing.

So, naturally, we thought: Wouldn't it be even better to try it on a motorcycle? -- Charles Fleming

Waiting for the 2015 green car of the year to be announced. #suspense #LAAutoshow pic.twitter.com/nicZEAGu7g

Several minivans – including the Nissan Quest, the Chrysler Town & Country and its twin, the Dodge Grand Caravan -- don’t do a good job of protecting occupants in crashes and failed recent Insurance Institute for Highway Safety tests.

The Honda Odyssey was the only van among those tested to get a “good” rating and Toyota’s Sienna tested at the “acceptable” level, the insurance group reported Thursday.