Newsletter: Hot Property: Just when you thought things couldn’t get any crazier

Now we have officially seen it all. The Bel-Air mansion that hit the market mid-week at $250 million is the most expensive home for sale in the U.S.

Where to begin? Well, at the top of the four-level, 12-bedroom house there’s a deck displaying a decommissioned helicopter as art. The chopper was brought in by crane — because owner/developer Bruce Makowsky wanted it there. And, just for grins, the interior of the ornamental bird has all-new high-end upholstery.

Talk about a home full of ultimate amenities.

Our tour of the $250-million megamansion in Bel-Air was conducted by Makowsky himself.

The home builder for billionaires made his fortune in handbags. So we found it interesting that he collected ours at the beginning of the tour — no photos, selfies or videos allowed.

To follow him through the 38,000 square feet of interiors is to get a glimpse into what makes him happy — there’s a four-lane bowling alley, a wall of candy bins and a movie theater with a sound system to rival any other. Art and leather are everywhere as are automobiles and nautical accessories, all included in the purchase price.

Of indiscriminate middle-age, Makowsky is a man who appears comfortable in his fashion choices. On the day of our tour he was clad in a blue jacket, blue jeans and striking blue shoes. The overall effect was casual yet uncommon, which brings us back to the house. If a windowed contemporary palace can be warm and comfortable for its occupants, he has made it so. 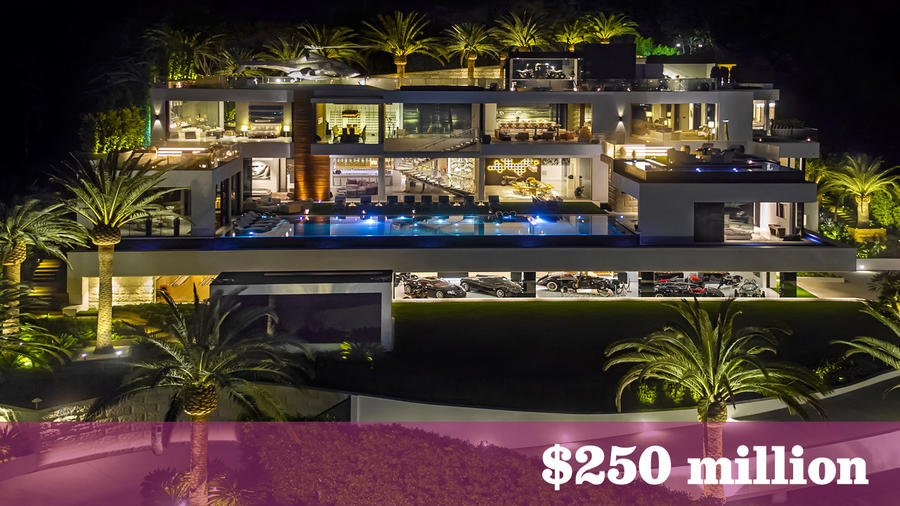 The spec house in Bel-Air is for sale at $250 million. (Bruce Makowsky / BAM Luxury Development)

Or for a fraction of the cost

Though it has been shopped as a whisper listing since October, the home of musicians Gwen Stefani and Gavin Rossdale now appears in the Multiple Listing Service with a price tag of $35 million.

Set in a gated community north of Beverly Hills, the renovated contemporary has an eye-catching kitchen with black-and-white striped cabinetry. The 11,845 square feet of interiors include a theater room, a gym and two offices. Including the guesthouse, there are seven bedrooms and 10 bathrooms.

An infinity-edge swimming pool, a lighted tennis court, a playground and a chicken coop complete the two acres of grounds.

The property was once owned by singer-actress Jennifer Lopez.

The Grammy winning Stefani, 47, gained fame as co-founder and lead vocalist for the band No Doubt. Rossdale, 51, is the frontman and guitarist for the rock band Bush. They are divorced. 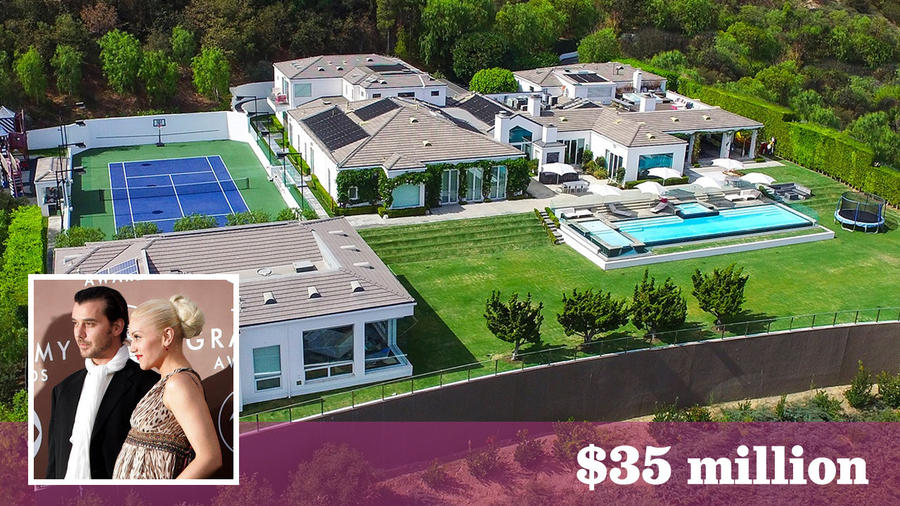 The L.A.-area home of Stefani and Rossdale has publicly listed for sale at $35 million. (Redfin.com)

The wooded hideaway was designed by De La Hoya, who sold to Ortiz in 2007 for $2.1 million.

Surrounded by pines and encompassing more than an acre, the compound includes a pair of log-cabin-style homes with a total of five bedrooms and 5.5 bathrooms in nearly 7,200 square feet. Both feature knotty pine paneling, stone fireplaces and antler chandeliers.

A detached garage once used as a gym has parking for four cars. There’s also a putting green and a footbridge that crosses a stream. 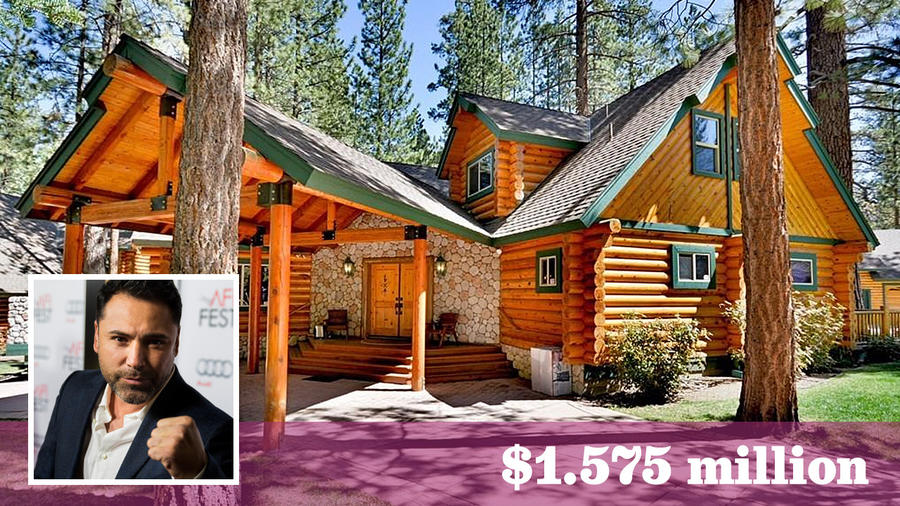 He completes his lap

Ian Thorpe, the Olympic freestyle champion known as the “Thorpedo,” didn’t set a record for a speedy sale but he did sell his home in the Laurel Canyon area of Hollywood Hills for its asking price of $950,000.

The rustic post-and-beam home, which sold in 55 days, has 960 square feet of living space — yes, it could easily fit in an Olympic size swimming pool. An updated kitchen with white subway tile, an open living room, a wood-paneled office, two bedrooms and two bathrooms are within the tidy space. No pool! 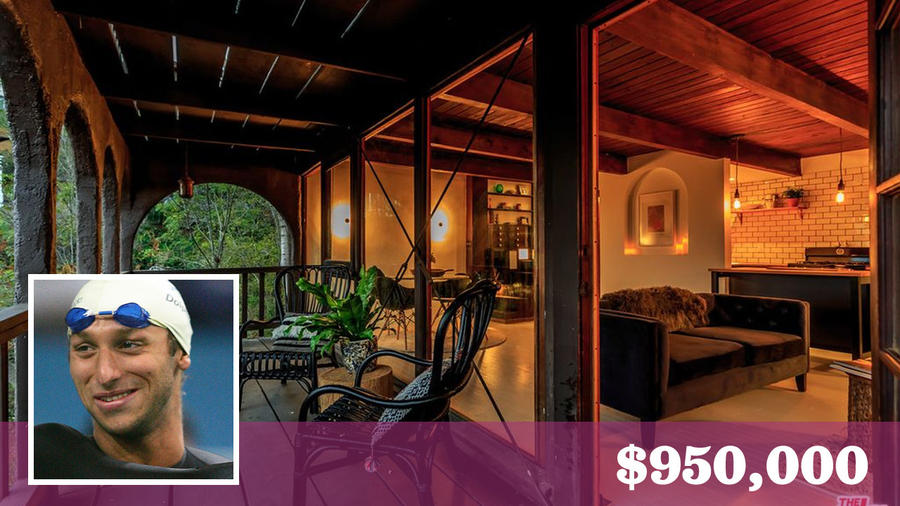 Thorpe sold his scenic retreat in Laurel Canyon for the asking price of $950,000. (Realtor.com | Associated Press)

The five-time all-star bought a home in Newport Coast for $7 million in late summer and sold it last month for $8.35 million, records show.

Set behind gates in Crystal Cove, the estate combines Spanish and Mission design details such as arched openings, wooden beams and a tile roof. Beyond the stone motor court are 6,800 square feet of interiors with four bedrooms and six bathrooms.

The 31-year-old power forward spent nine seasons with the Portland Trail Blazers. He signed an $80-million contract with the Spurs in 2015. 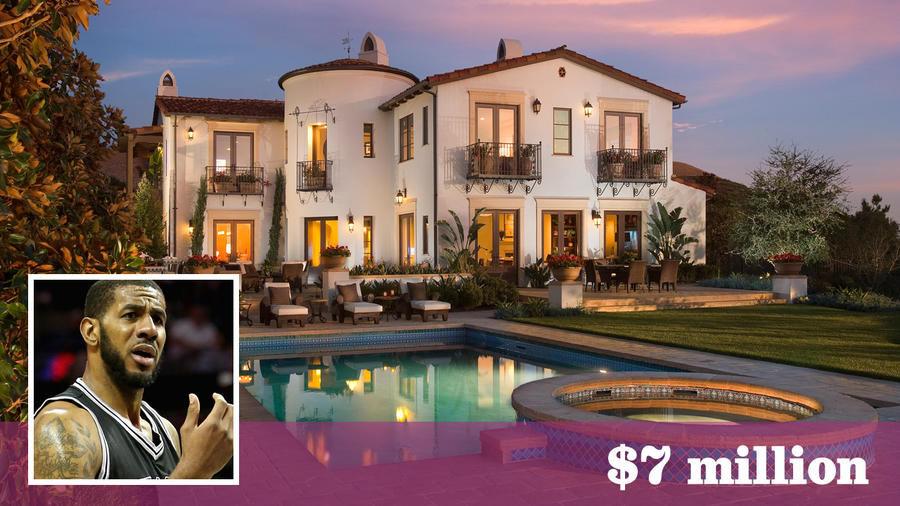 Dijon McFarlane, the record producer and beat maker better known as DJ Mustard, has bought a home behind gates in Chatsworth for $2.36 million.

Sitting on nearly three acres of grounds, the English-style estate includes a swimming pool and spa, a lighted tennis court and a six-car garage. Lion statues flank the steps leading up to the front door.

The sprawling house features a two-story foyer with a sweeping staircase, a library/den with a curved wet bar and six bedrooms within its 7,400 square feet of living space.

McFarlane, 26, has worked with such artists as YG, Tyga, Young Jeezy and Ludacris. 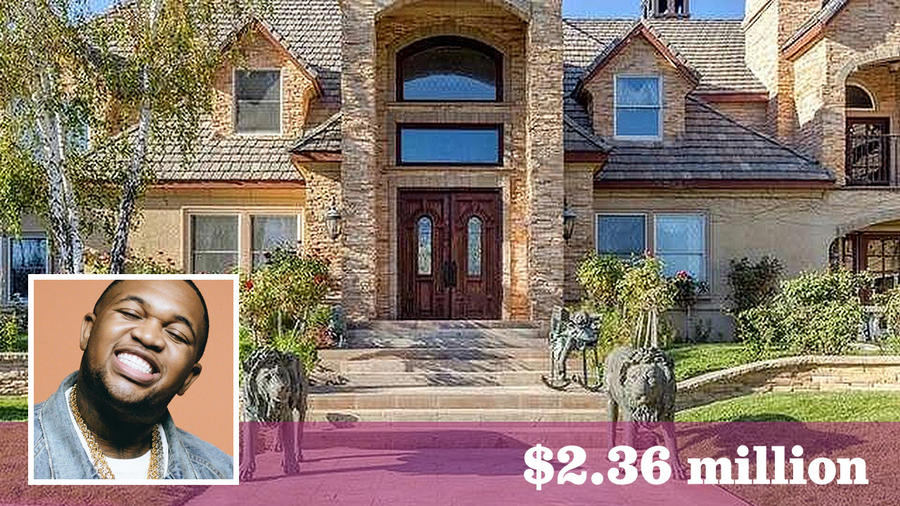 McFarlane paid $2.36 million for the estate on about three acres in Chatsworth. (Juwan Li | Courtesy of 10 Summers Records)

Ten years ago, Heisman Trophy winner Reggie Bush bought a Hollywood Hills home for close to $5 million. The former USC tailback was with the New Orleans Saints at the time. We got a smile out of the headline: “A place to run back to in L.A.” He intended to use the house in the off-season.

Twenty years ago, comedian Carol Burnett exchanged her Century City house for a Wilshire condo in what was described as “an even trade.” Each home was valued at about $3 million.

Thirty years ago, singer Luther Vandross moved from New York and purchased a home in Beverly Hills for close to $6 million. The rhythm-and-blues vocalist bought a two-story gated estate with an elevator, a projection room and a lavish master bedroom with spa and sauna for just under $6 million.

— Not sure how to tell a Georgian from a Greek Revival? Lifehacker has come up with a nifty online chart to help home buyers (and others) identify different housing styles.

— Bisnow tracked down housing projects around the globe that serve underrepresented groups by targeting very specific residents, such as homeless veterans and adults with autism.

— Although our focus is on Southern California, Hot Property still loves to look at architecture elsewhere. This soaring midcentury modern was designed by the architect of Oregon’s Eugene Airport. We’re digging the wing-like entry and the asking price: $480,000.