Classic Hollywood: A brief history of Academy Awards controversies (no, #OscarsSoWhite is not the first)

The #OscarsSoWhite uproar over the lack of diversity in the Academy Award nominations the last two years and the subsequent call by some for a boycott of the ceremony played a role in the Academy of Motion Picture Arts and Sciences changing the rules regarding the organization's membership.

But boycotts are nothing new in academy history. The first boycott took place 80 years ago, and there have been numerous controversies at the , including winners snubbing the awards, protests and presenters and recipients using the ceremony as a bully pulpit for their political beliefs.

Here's a look at some of the most notable moments of discord in Oscar history.

Time does not heal all wounds 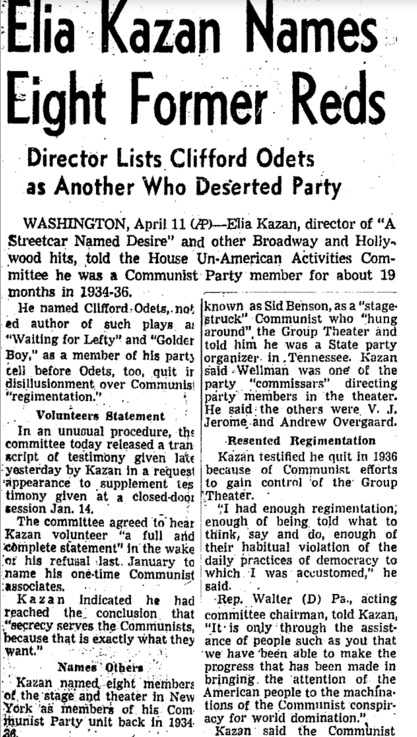 One of the most controversial choices for the honorary Oscar was Elia Kazan in 1999. Then a frail 89, Kazan was one of the most influential directors in movies and theater. He directed such Broadway classics as "A Streetcar Named Desire" and "Death of a Salesman." He won Oscars for directing 1947's "Gentleman's Agreement" and 1954's "On the Waterfront." Kazan also directed such memorable pictures as 1951's "A Streetcar Named Desire," 1955's "East of Eden," 1957's "A Face in the Crowd" and 1963's "America America."

But in 1952, Kazan testified before the House Un-American Activities Committee and named names of several friends who had been members with him in the Communist Party. He never apologized for what he did.

Blacklisted screenwriter Robert Lees told The Times in 1999: "Kazan crawled through the mud for a big [money contract] at . He should apologize."

In an interview with The Times in 2003, writer Christopher Trumbo, the son of blacklisted writer Dalton Trumbo, noted that his father had held Kazan in contempt. "It has nothing to do with Kazan's ability to direct a motion picture," he said. "Those who obviously stood firm and didn't testify and who in fact defied the committee held a moral ground. My father considered it a patriotic act, an act that is in defense of the Constitution."

The announcement of Kazan's award in January 1999 immediately caused a storm of protest led by former blacklisted screenwriter Bernard Gordon as well as blacklisted scribes Norma Barzman and Walter Bernstein.

"His lifetime achievement was the destruction of lives," said Barzman.

Some 500 protesters began gathering the afternoon before the Oscars on March 21, 1999, at the Dorothy Chandler Pavilion carrying signs saying "Elia Kazan: Nominated for the Benedict Arnold Award," "Don't Whitewash the Blacklist" and "Kazan-the Linda Tripp of the 50s." There were also about 60 pro-Kazan supporters. 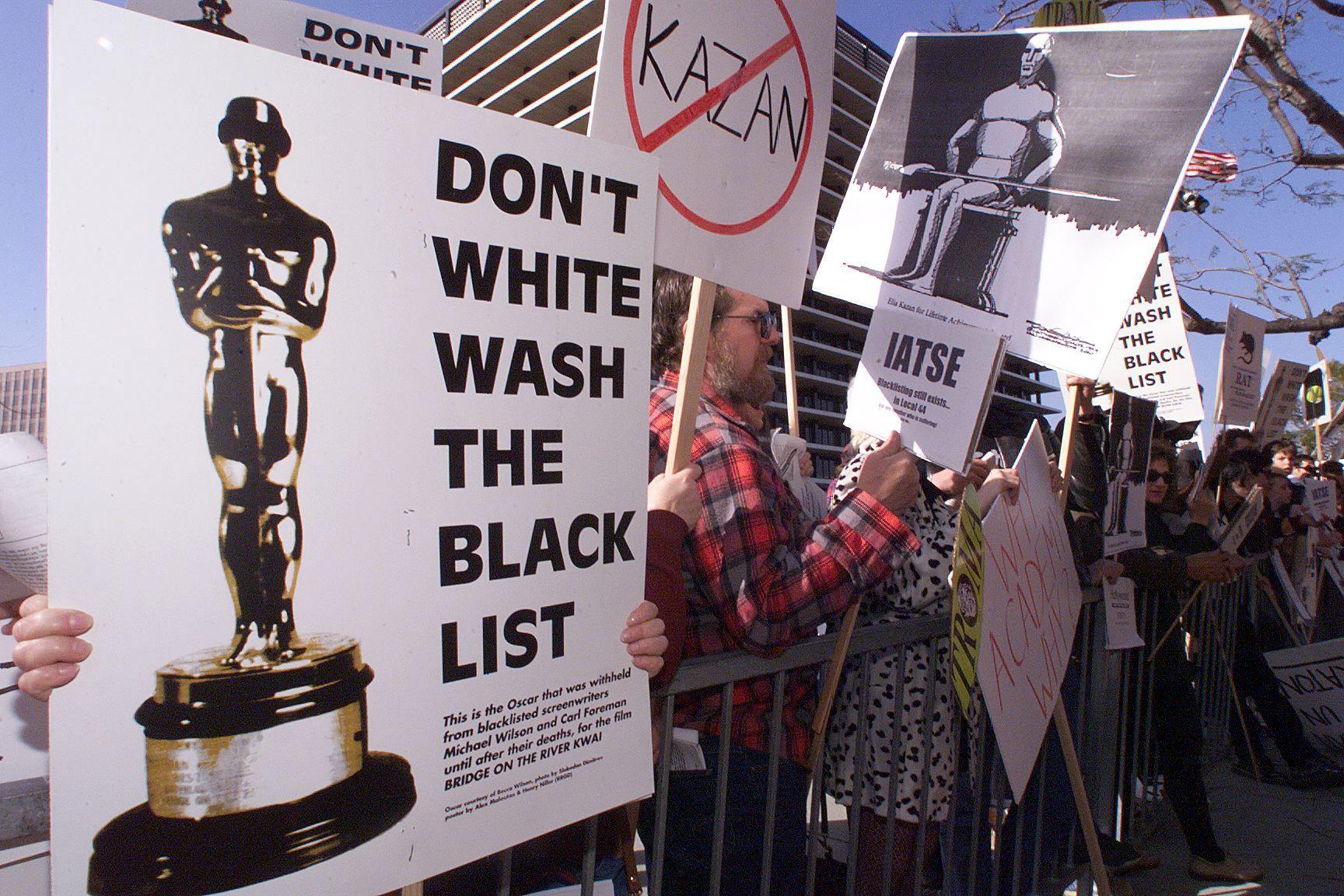 The atmosphere inside the Chandler was slightly more cordial. After being introduced by Martin Scorsese and Robert De Niro, Kazan walked slowly on stage with the help of his wife. Several actors including Warren Beatty, Helen Hunt and Meryl Streep gave him a standing ovation. Steven Spielberg applauded but remained seated, while Nick Nolte, Ed Harris and Amy Madigan stayed seated and did not applaud.

"I want to thank the academy for its courage and generosity," Kazan said, adding "Thank you all very much. I think I can just slip away now."

Just being a good union man 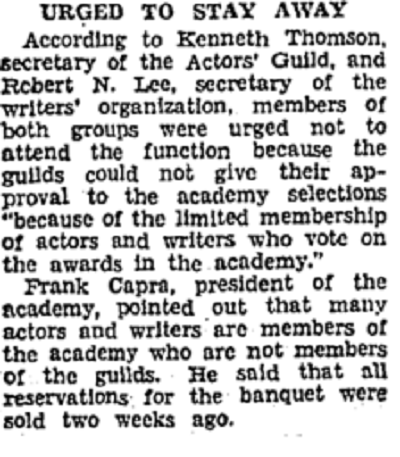 From The Times coverage of the 1936 Academy Awards.

Many academy members boycotted the Academy Awards on March 5, 1936, at the Biltmore Hotel because of issues involving the actor, writer and directors guilds, who were trying to form unions independent of the studios and the academy. "The Informer" screenwriter Dudley Nichols took a strong pro-union stance and not only boycotted the ceremony but refused his Oscar for the film for which John Ford earned his first Oscar. (Ford also didn't attend the ceremony.)

Nichols even sent back the Oscar to the academy's then president, director Frank Capra. Two years, later, he finally accepted the Oscar after the National Labor Relations Board certified the Screen Writers Guild as the bargaining representative for screenwriters.

An Oscar Brando had to refuse

Marlon Brando heartily accepted his first lead actor Oscar for 1954's "On the Waterfront" even posing for silly pictures with host Bob Hope. But that wasn't the case when he earned his second for 1972's "The Godfather." When his name was called at the ceremony on March 27, 1973, at the Dorothy Chandler Pavilion, it wasn't Brando who came on stage but actress-activist Sacheen Littlefeather — her real name was Marie Cruz — in Native American dress. She told the shocked crowd that Brando couldn't accept the Oscar because "the reasons for this being the treatment of American Indians today by the film industry — excuse me — and on television, in movie reruns and also with recent happenings at Wounded Knee."

Though there was a scattering of applause, the speech was met with loud boos.

Vanessa Redgrave versus the JDL

Political activist and actress Vanessa Redgrave had raised the ire of the Jewish Defense League and other Jewish groups because of her pro-Palestinian 1977 documentary "The Palestinian." And their disapproval increased when she was nominated for supporting actress for 1977's "Julia" as a woman who risked her life to fight the Nazis. The JDL even asked 20th Century Fox, which released the film, to never hire her again. Fox and the Screen Actors Guild refused. So at the 50th Academy Awards on April 3, 1978, JDL members were picketing outside the Dorothy Chandler Pavilion as were some PLO supporters.

When Redgrave won the award, she told the audience:

"I think you should be very proud that in the last few weeks you've stood firm and you have refused to be intimidated by the threats of a small bunch of Zionist hoodlums whose behavior is an insult to the stature of Jews all over the world and to their great and heroic record of struggle against fascism and oppression."

"Redgrave's "Zionist hoodlum" remark was met by gasps, loud boos and a smattering of applause.

A reading from Hanoi Bert 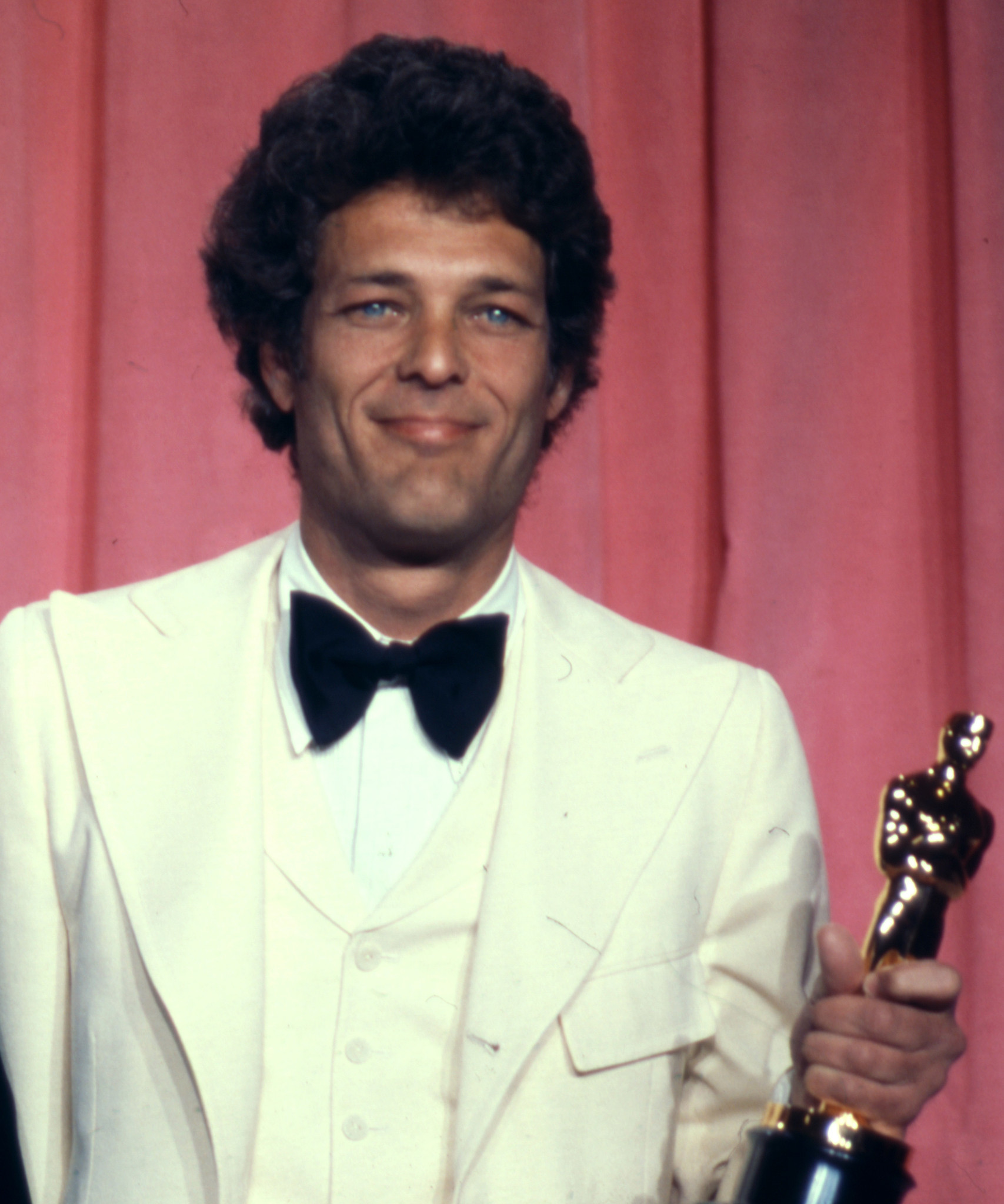 In his speech, Schneider read a wire sent by Ambassador Dinh Ba Thi, the chief of the Provisional Revolutionary Government's delegation to peace talks in Paris.

"Please transmit to all our friends in America our recognition of all that they have done on behalf of peace and for the application of the Paris Accords on Vietnam. These actions serve the legitimate interest of the American people and the Vietnamese people. Greetings of friendship to all the American people."

The speech was generally met with disapproval from the audience. And Frank Sinatra, one of the ceremony's hosts, said later in the show: "The academy is not responsible for any political references on this program, and we are sorry that they had to take place this evening."


The political speeches of presenters Susan Sarandon, Tim Robbins and Richard Gere during the 65th Academy Awards on March 29, 1993, so upset show producer Gil Cates that he told The Times: "I wouldn't invite them to my home, and I wouldn't invite them to a future show. [For] someone who I invited to present an award to use that time to postulate a personal political belief I think is not only outrageous, it's distasteful and dishonest."

Sarandon and Robbins had talked about 250 Haitians being quarantined in Cuba. "Their crime, testing positive for the HIV virus," said Robbins. Sarandon encouraged officials to allow them to come to the U.S. And "free Tibet" activist and Buddhist Gere brought up human rights abuse in China.