In "Dawn of the Planet of the Apes," the hyper-intelligent apes launched a brutal assault on the remnants of humanity in the streets of downtown San Francisco. In reality, the action was in a desolate part of downtown New Orleans, where filmmakers re-created the City by the Bay with computers. Visual effects supervisor Dan Lemmon explains the process of making things go from bad to worse for the humans holing up on California Street. 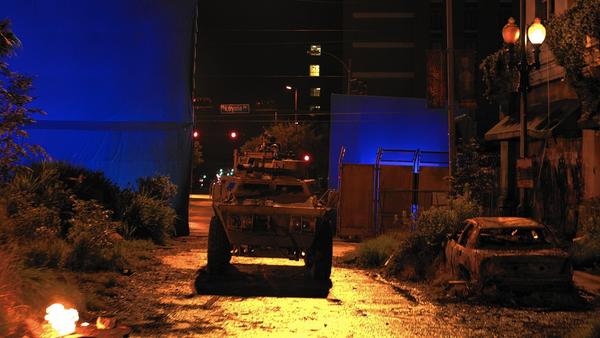 1. "We took over the intersection of Rampart Street and Common Street in New Orleans for four or five months," Lemmon said. "Most of the buildings in that area were abandoned. We re-dressed that small area to play different parts of San Francisco." Just a handful of shots were actually created in San Francisco, but so much digital manipulation was done to age the buildings that there was very little left of the original photography. 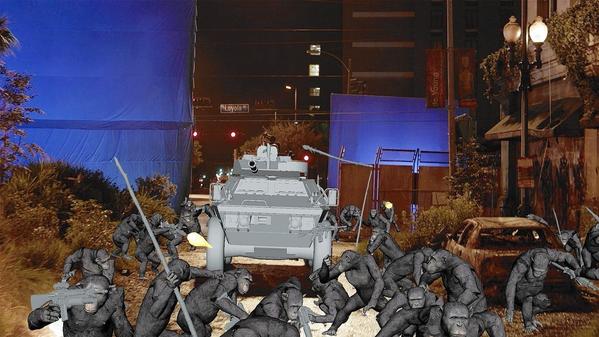 2. Performance-captured apes were digitally added to the shot, but other elements that actually existed, such as the tank, also had to be re-created digitally in a technique called match moving. "We create a digital version of the camera that lines up to the physical camera," Lemmon said. "So when we add the apes, everything sticks. If you don't do it correctly, everything will slide around and they won't look like they live in the same world." The apes are the work of dozens of actors and even some of the animators themselves, putting on motion-capture suits to act out the apes' movements. 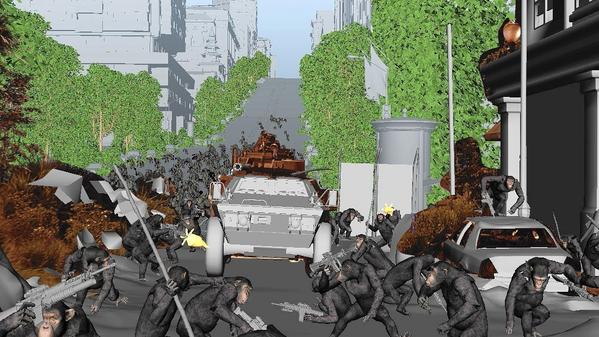 3. The small physical set was extended with a digital version of California Street in San Francisco using a process called lidar scanning. "It works like a radar, but it's laser based," Lemmon said. "It sweeps a laser beam in a circle and you get a cloud of three-dimensional points, and you use that to build a geometry of the location." A visual effects artist traveled up and down California Street for three days to map every conture of the architecture. 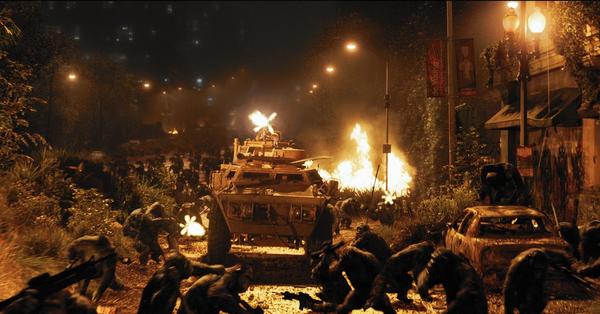 4. For the final layer, digital smoke and fire was added on top of the actual fire on set to disguise the natural gas flame bars. Despite the detail given to the background, it was dimmed to the point of near invisiblity because the story called for a city without electricity. "The temptation is to add enough light to see all the detail, but, in service to the story, we ended up taking it back," Lemmon said. Additional muzzle flashes were also added to accentuate the real flashes from the guns shooting blanks.

Patrick Kevin Day previously wrote about television for the Los Angeles Times. As a producer on the L.A. Times website, he helped launch the Envelope, the Times’ awards-centric site, in 2006. He grew up in Indiana and attended the University of Southern California.