“Star Wars: The Force Awakens” just teased out a big fat spoiler for a character we’ve long suspected would be engaging in a little saber-on-saber battle action. The new “Episode VII” clip shows actor John Boyega lighting up the traditional weapon of a Jedi, the lightsaber. Warning: Wild spoilery speculation to follow!

“Star Wars” debuted the little teaser via its official Instagram. The clip once again showcases the now confirmed voiceover stylings of actor Andy Serkis growling, “There’s been an awakening. Have you felt it?”

There has been an awakening... #StarWars #TheForceAwakens


Playing Supreme Leader Snoke, Serkis’ character has yet to be officially revealed, however Lucasfilm did offer a few snaps of the actor in full-performance gray pajamas, surrounded by cameras. So it’s pretty safe to guess that while the actor’s voice may be recognizable, his face most likely will not. However, thanks to a recent Empire Magazine article, we now know what side of the force Snoke resides in: the dark one. Director J.J. Abrams confirmed to Empire that character Kylo Ren (played by Adam Driver), who has long been suspected to be a Sith, is, in fact, not a Sith. However, Ren, “works under Supreme Leader Snoke, who is a powerful figure on the Dark Side of the Force.”

The next thing we see in this teeny-tiny clip is shots of the New Order (the new name for the Empire), Daisy Ridley, who plays Rey, and her droid, BB-8, a snowy scene with Ren once again switching on his crossguard lightsaber, and then something entirely new. Boyega (playing the character Finn) appears in what could be seen as the same scene as Ren, in the snow holding his own blue lightsaber.

This isn’t the first time we’ve seen Finn wield the lightsaber, but it is the first time we’re seeing him do it in actual “Star Wars: Episode VII” footage. Finn premiered his lightsaber stance in the new Drew Struzan poster that debuted at D23. The new collector’s item was passed out to fans attending the “Star Wars” panel in Anaheim. 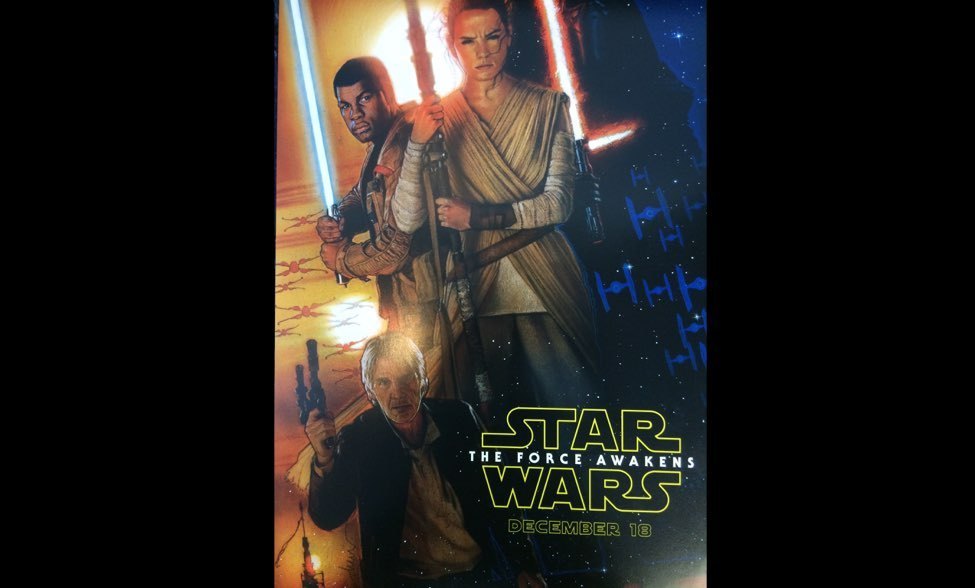 Does this mean that new character Finn is “force sensitive?” Possibly. But even more interesting is the fan theory that the lightsaber seen here, in the poster, and in the previous trailer being passed around from various character’s hands, is not a new saber, but Luke Skywalker’s long-lost lightsaber from the battle on Cloud City.

We spoke to Boyega on the press line at D23 in hopes of finding out more about his relationship with The Force, and his response was a bit vague. “Finn is very, very interesting, and his mentality will almost reveal the whole movie,” Boyega said. “There’s a lot of responsibility entrusted in this character. And to almost tell you how he feels about the Death Star would be giving away the story of ‘Force Awakens.’ Why would you want that? So we’re gonna wait until Dec. 18. we’ll check it out, and you’ll see exactly where Finn stands with that.”

Could the line about being entrusted with a lot of responsibility mean Luke’s lightsaber? When lost in the mystery box that is a J.J. Abrams production, it’s always best not to put too much stock in any hunches or suspicions. That being said, it’s great to see a new character get all riled up while holding an elegant weapon for a more civilized age.

J.J. Abrams explains why anyone would still want to join the new Empire in 'Star Wars'

Is this the brand-new remodeled 'Star Wars: Episode VII' AT-AT?