Fans in need of a "Rick and Morty" fix are in luck. While they might still have a bit of a wait until they can see how the Season 2 cliffhanger is resolved, the pair’s adventures are still going strong in the comic book series from Oni Press.  And now the comic book series is getting a new writer.

Kyle Starks will be taking over writing duties starting with "Rick and Morty" No. 16, which will see Morty, Rick and Summer venture to an alien planet to harvest some "space medicine" before things get complicated.

Starks is best known for his graphic novel "Sexcastle," about a former first-class assassin who is pulled back into the world of killing, which he describes as "an homage to ’80s action movies full of kicking and joking and violence and one-liners."

"I like to think that my oeuvre is 'dumb smart,' " Starks explained. "It’s dumb, but I make it a little bit more than just a butt gag, basically. It’s a butt gag that is also some sort of play on, like, John Locke’s philosophy.

"I’m super lucky because I feel like 'Rick and Morty' is kind of right in line with what I’ve done to date," he said.

His resume also includes the D-Man story for Marvel’s "Secret Wars, Too" anthology and an issue of "Invader Zim," also from Oni Press. 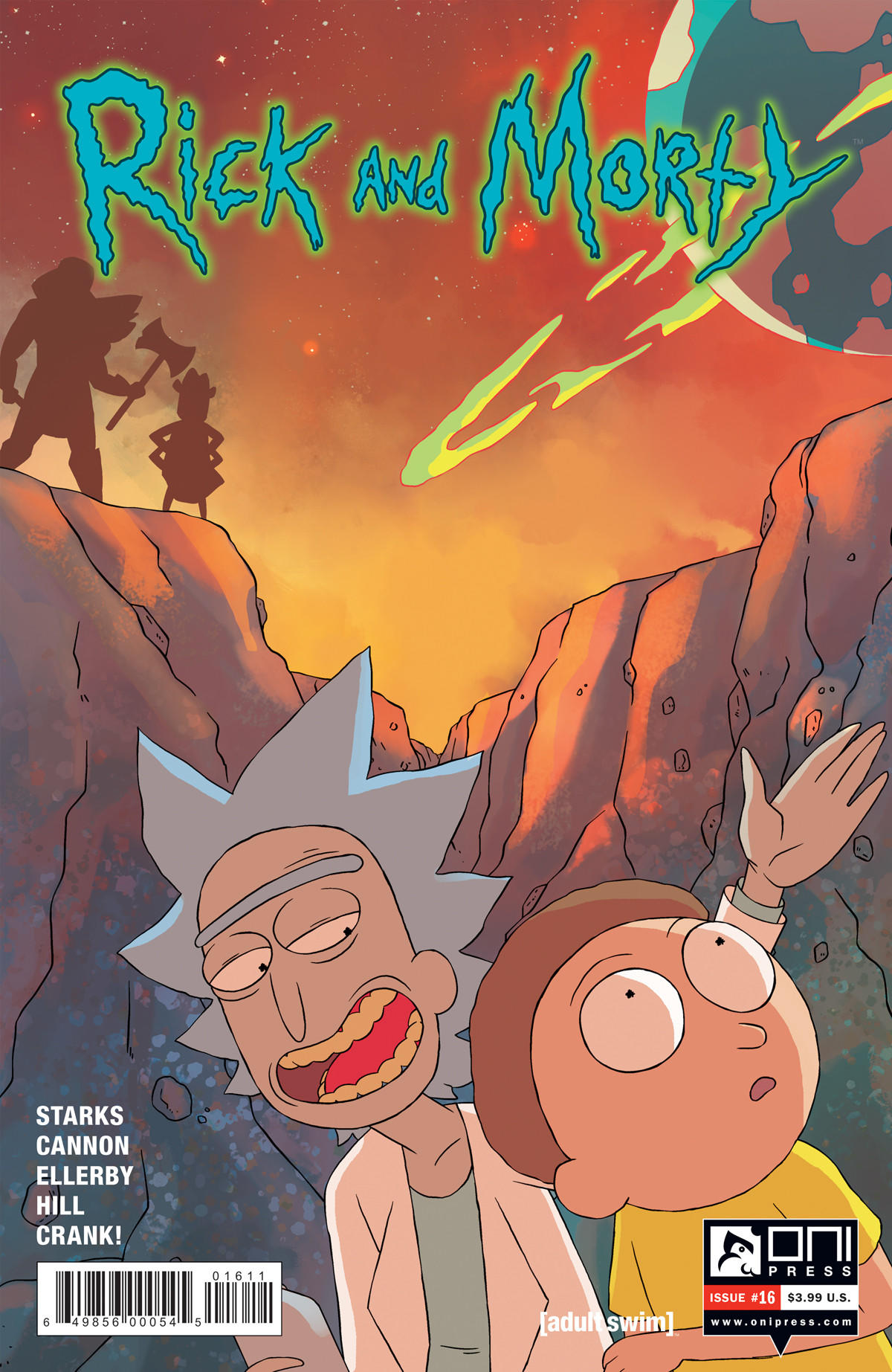 The cover for "Rick and Morty" No. 16 by CJ Cannon and Ryan Hill. (Oni Press)

Starks discussed his upcoming "Rick and Morty" run via telephone (a warning to those not caught up with the show that some Season 2 plot details are mentioned).

What do you think it is about "Rick and Morty" that appeals to people?

It seems like hyperbole, but "Rick and Morty" I think legitimately has something for everybody.

There’s the family dynamic. There’s a character, I think, for everybody. Hopefully there are not very many people that go, "Man, I sure do relate to that Jerry." But presumably somebody out there relates to Jerry. Don’t marry that person. That’s my advice.

Is it intimidating at all to work on a series like "Rick and Morty," where fans might make comparisons to the show?

Yes. The comic can’t be the show. You have 18 pages, and you can’t do in 18 pages what you can do in 25 minutes or whatever. There’s just no way. On the show, you can have an A and B story; there’s no space for an A and B story [in the comics].

In the pilot episode, there’s a bit where Rick and Morty are running through the sort of dimensional airport and there’s an alien spit and the spit starts running next to them and it goes through all the cycles of life, and Rick just says to Morty, "Don’t think about it." You can’t do that in the comic. You can’t do that gag. That gag is six pages in the comic book. So you’re limited.

What I tried to do is I tried to capture the fun. I tried to put as much as I could, a little bit of spin on it to make it more than just goofy fun.

Because ultimately you want the comic to be fun and have momentum. There’s action and there’s a compelling enough storyline, but I think it’s not "Rick and Morty" unless you try to do that one little thing. I’d like to do more. If I had like 40 pages of book, I could maybe pull it off.

Also, the TV show has Dan Harmon and God knows how many writers. I just have me. And I’m sure ["Rick and Morty" comic book writers] Zac Gorman and Tom Fowler felt the same way.

What do you think you can do in the comics that the show can’t do?

I feel like there’s certain answers for comics, like "this is what you can do in comics that you can’t do in other genres." But in "Rick and Morty," they did that episode where they had 400 characters for "Total Rickall," and they’re frequently going into these big set pieces.

Are there any plot points or worlds they’ve visited in the show that you’re excited to revisit in your run?

I don’t want to give anything away. I’m doing five issues, and three of them are ongoing, and I think the payoff for the third issue includes a character that I want to use that I think almost anyone who would write "Rick and Morty" would want to use because I think they’re kind of everyone’s favorite besides Rick and Morty.

I wanted to show that Rick is both a villain and not a villain, and I felt like at the time when I was thinking about it, the closest equivalent was like "Breaking Bad." I wanted to show Rick become this, Rick be who he is, which is universally terrible. But at the same time it comes back around again that it’s just Rick being Rick; it’s neither good nor bad, it’s just him being him, which I think is one of the great things about Rick.

Of course Morty is always trying to get him to do the opposite of that because Morty is ultimately good. So I’m excited about that.

They have such a great lineup [of characters], but you also don’t want to be like using Zeep in every single one. I’d love to use Zeep over and over and over, but you also want to respect the show and bring something new as much as possible. 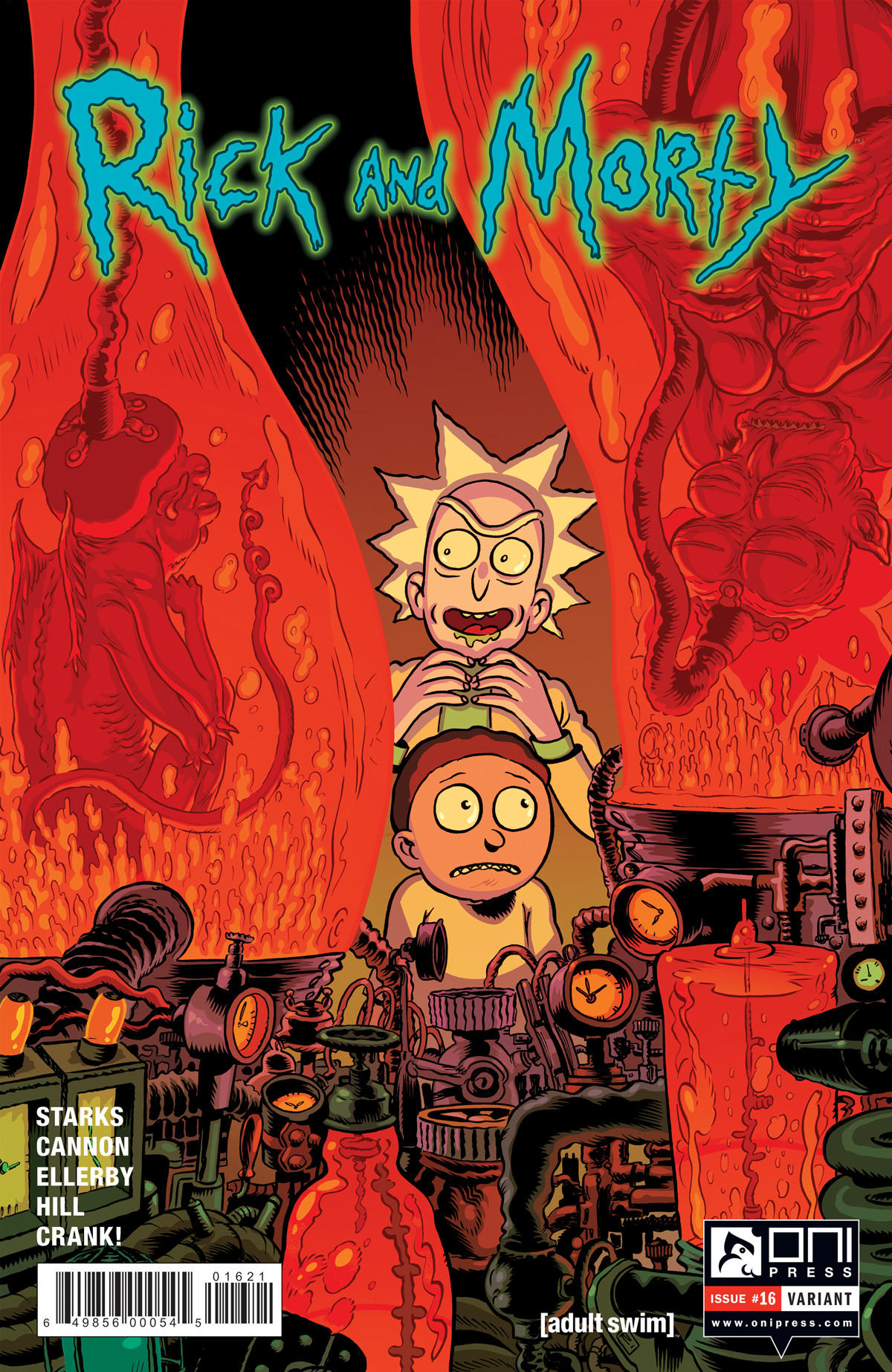 The variant cover for "Rick and Morty" No. 16 by Troy Nixey and Dave McCaig. (Oni Press)

Is there a specific time frame the comics take place, with respect to the show?

I think it has to be timeless. I mean, obviously at the end of Season 2, Rick goes to space prison. We’re not dealing with that. I don’t know what happens to Rick when he comes out of space prison. I have to wait a year like everybody else. So everything happens between Season 1 and Season 2.

It’s sort of timeless, but the entire run would have to be before he goes to space prison until we know otherwise.

No one changes. Jerry never changes. Rick never changes. Morty never changes. Well, at the end of Season 2, Rick definitely changed. But I think when that story comes back, it’s just going to be another example of "Rick’s the worst, but he’s not; he’s the best."

So I don’t think it affects anything unless they, like, suddenly bring in an uncle for Season 3. And then we’ll be like, "All right, it was before the uncle, obviously."

How are you going to balance the sort of family dynamics moments of "Rick and Morty" with the sci-fi tropes in your run?

I wish I had more pages so I could do more stuff with the family dynamic. Because as a father — I’m married and have two children — that’s part of the show that really interests me. Seeing how Jerry and his wife interact and how they interact with adult children. I have baby children, so it’s not the same.

I’m doing a lot of stuff with Summer because I feel like Summer is a great character. And I’m doing as much stuff as I can with the parents. Summer is sort of like my B story through my three ongoing issues. Even though I said you can’t do that — but when you have three issues, you can; it’s just really hard.

Summer is a great character. She’s a great female representation. She doesn’t take any crap. She has some shortcomings, but I think mostly Summer’s tough and I think that’s a good thing to have and I think it’s good for her to be that character in comics.

The show definitely has its darker moments. There’s the violence. How do you temper that for the comics?

Well, I’m not allowed to be super-violent because Cartoon Network is publishing the book. So I don’t get to be crazy super-violent, which, I would love to be. But I’m glad to make the book better because it’s not. Because more people would enjoy it.

All the stuff that’s really dark and violent really isn’t in the comic book. That’s sort of the primary difference between the cartoon and the comic. It’s less dark. Still disturbing though.

Starks' first "Rick and Morty" issue will be released July 27. CJ Cannon and Ryan Hill will continue handling the art for the comic series. Issue 16 also will feature a backup comic written and drawn by Marc Ellerby. The full synopsis for "Rick and Morty" No. 16 from Oni Press is below:

"Morty is sick and tired of Rick always being a big selfish jerk, so he convinces Rick to go harvest some 'space medicine' on an alien planet. They even bring Summer, even though she won’t stop crying about having her heart broken or whatever. But while on the planet, they get interrupted by robobros and some heavy-cologne-wearing dude named Peacock Jones, so Morty might have to resort to some truly unspeakable tactics in order to get the medicine and get home safely. Plus: backup comics written and drawn by Marc Ellerby!"