SXSW 2015: How the Austin music fest regained its edge

We’re at South by Southwest, the annual interactive, music and film festival going on in Austin, Texas, until March 22. Keep up with our ongoing coverage here and follow our reporters @AmyKinLA , @IndieFocus , @mikaelwood and @Toddmartens on Twitter.

The gaming world tries to get inside our heads

Having attended SXSW now for 12 years, I can safely say that excitement happens on the fringes, far from whatever brand is hoping for a slight edge in attracting the attention of more than 30,000 attendees.

The gaming portion of SXSW is entirely on the fringes.

SXSW regains edge, with emphasis back on emerging talent 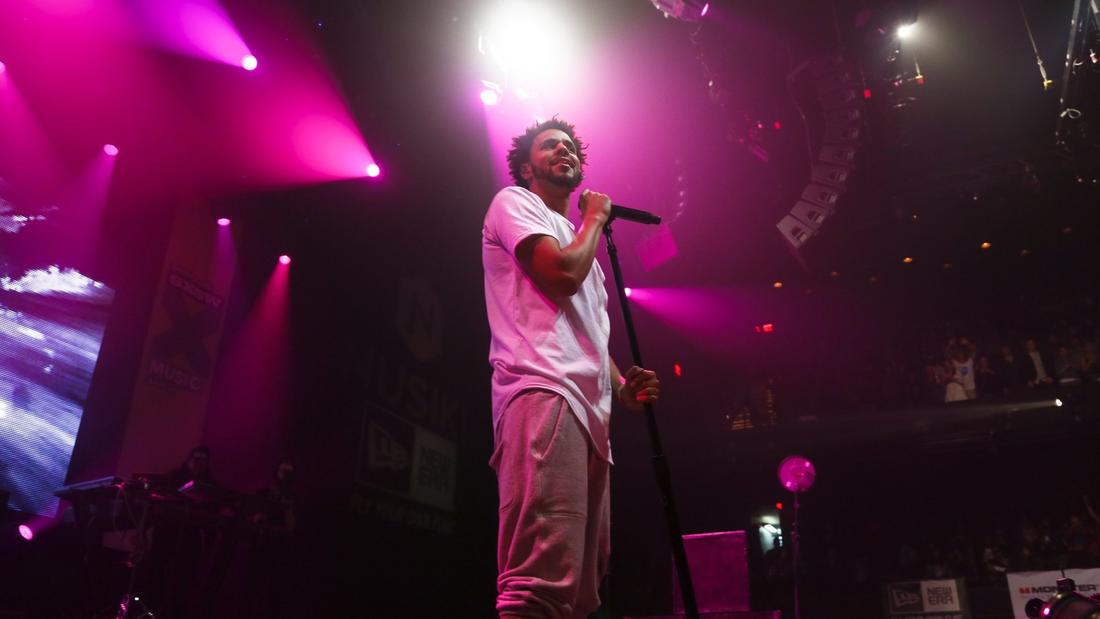 At this year’s SXSW music festival, fewer corporate brands led to fewer boldface names -- with the notable exception of Snoop Dogg, who delivered the festival’s keynote address -- and that cleared the way for a reemphasis on emerging talent. 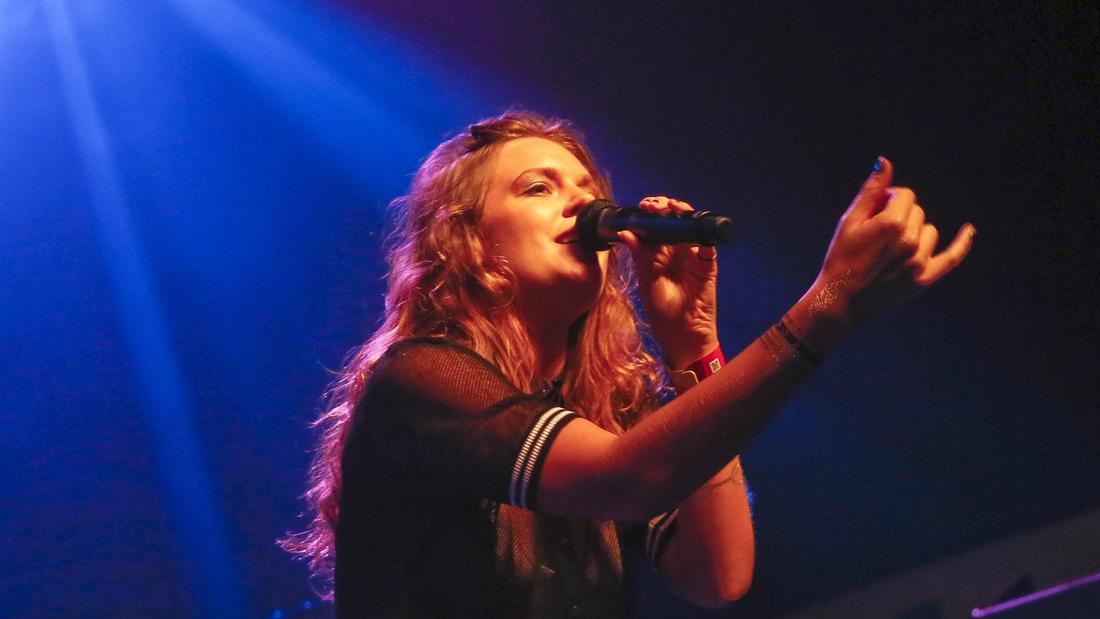 Tove Lo at Perez Hilton’s One Night in Austin Party 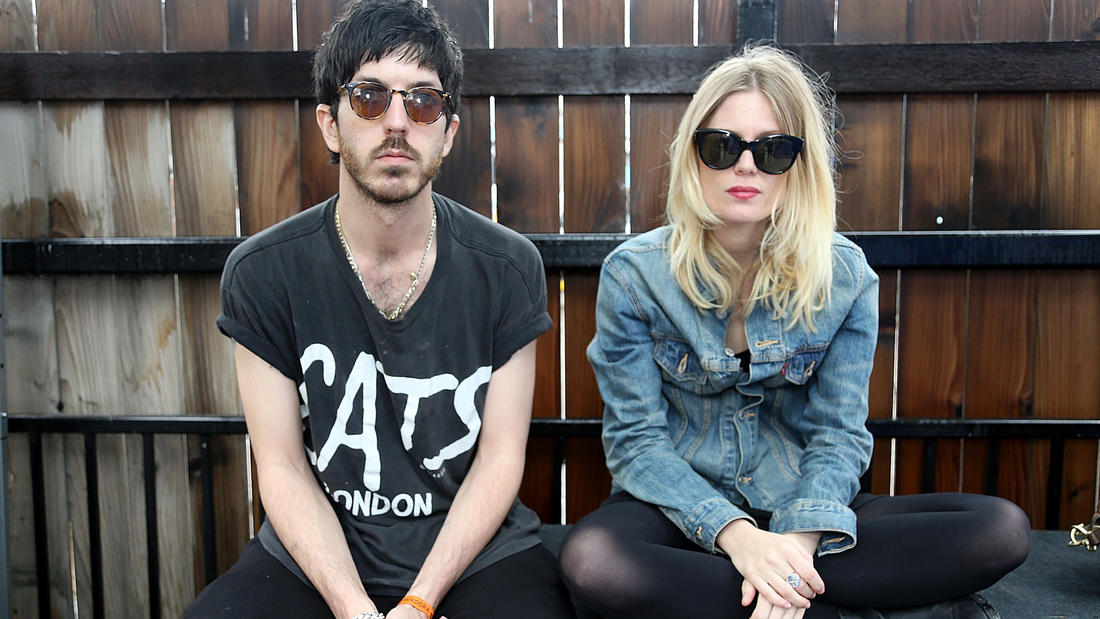 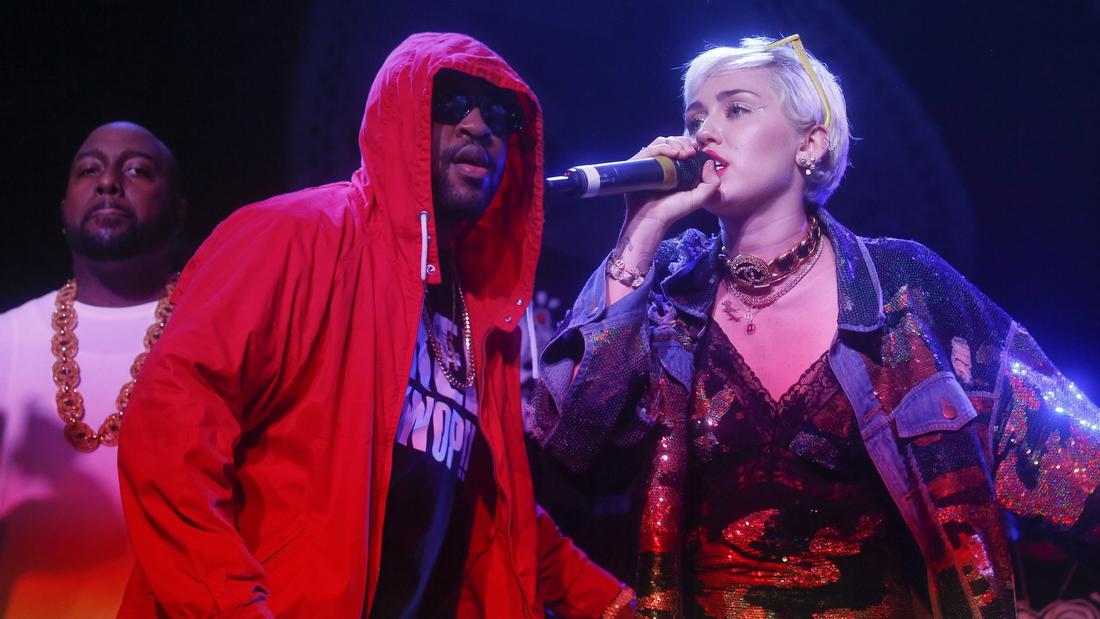 Miley Cyrus, right, joins Mike Will Made It Ghostface Killah of the Wu-Tang Clan Killer Mike, left, and El-P of Run the Jewels 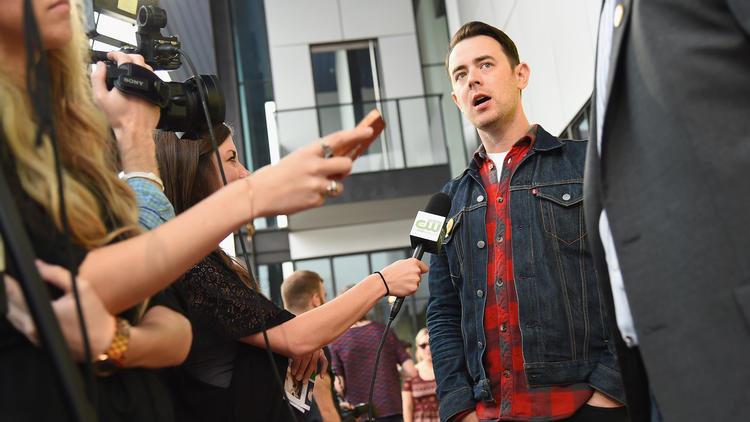 “All Things Must Pass” recounts the rise and fall of Tower Records, the once-powerful music retailer that went out of business in 2006, nearly half a century after it was founded by Russ Solomon in Colin Hanks’ hometown of Sacramento. The documentary also takes a broader -- and unexpectedly touching -- look at the rapid change that’s beset the entire music industry over the last 15 years.

Soak . ‘I pray for you and you know I don’t like Jesus.’ Fragile, sharp, humorous confessionals.

Lowell .'You live in a man’s world. I live in my own world.’ Dance pop with a welcome socially conscious edge.

Shamir . A funky take on dance music that shimmied through hip-hop and ‘80s-era warehouse raves.

Torres . Tension-building rock ‘n’ roll full of guilt and a lifetime of anxiety.

Vic Mensa . You probably already know, but he’s going to be Chicago’s next big hip-hop star.

Amason . Amanda Bergman was dressed sorta like like Jessie from ‘Toy Story,’ just part of this Swedish band’s charm.

Sweet Spirit . Exuberant indie-pop, even when in a laundromat.

Little Simz . “Try and catch what I’m saying. It’s going to be really fast.” It’s worth the effort.

The fifth time’s a charm for Tobias Jesso Jr. 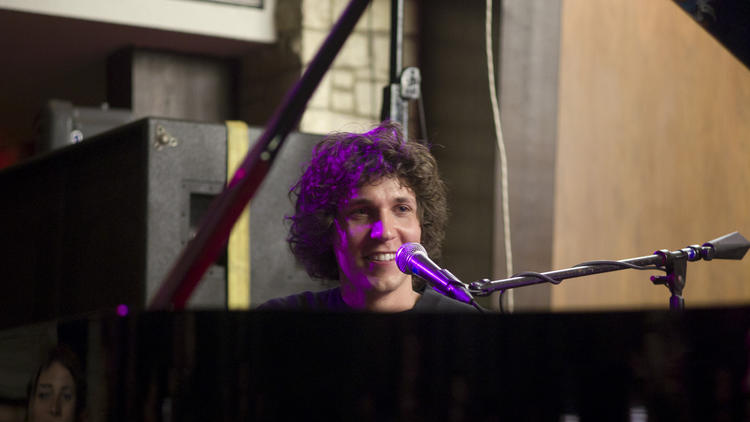 (Iggy Rahav / For The Times)

If I was at this show I’d want my money back.
Tobias Jesso Jr., musician

Jesso took five tries to get through his song “True Love,” the fifth a success only because someone in the audience handed him a phone displaying the song’s lyrics.

Jimmy Kimmel’s trip pays off in barbecue and viewership 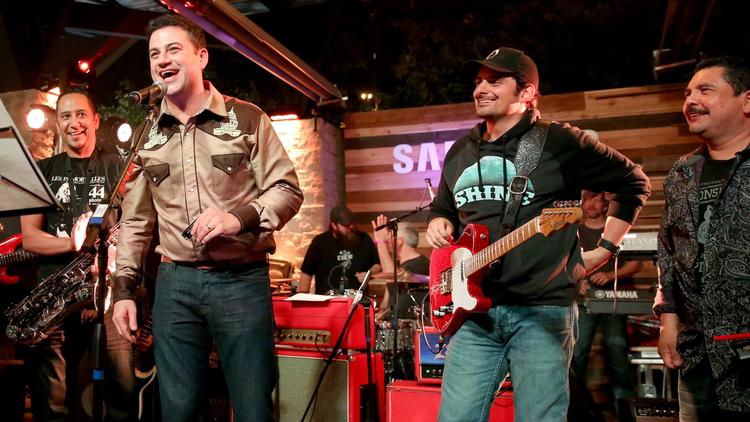 No. 1, it’s really for the viewers. People are interested to see when you travel to a town -- and you get a big boost in the local markets. And a plate of barbecue has just been delivered to my desk. That’s reason No. 2.
Jimmy Kimmel, TV host 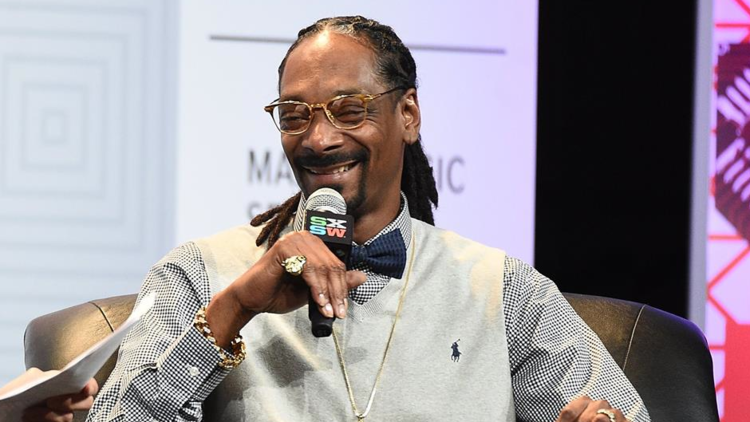 The first thing to know about Snoop Dogg’s keynote address Friday morning at the South by Southwest music conference: His interlocutor was his manager, Ted Chung.

This was image-crafting in its purest form, from the bit of showbiz news he and Chung unveiled to Snoop’s anecdote about getting high and sharing a bucket of Kentucky Fried Chicken with Willie Nelson in Amsterdam.

Known to American fans for her top 5 electro-pop hit “Habits (Stay High),” Tove Lo first found success writing tunes for acts such as Girls Aloud and Icona Pop. Appearing at the Belmont as part of an Island Records showcase, the singer was gleefully unabashed from the get-go. Also among Thursday’s highlights was L.A.'s Best Coast, which played one of its nine scheduled SXSW at the Palm Door. 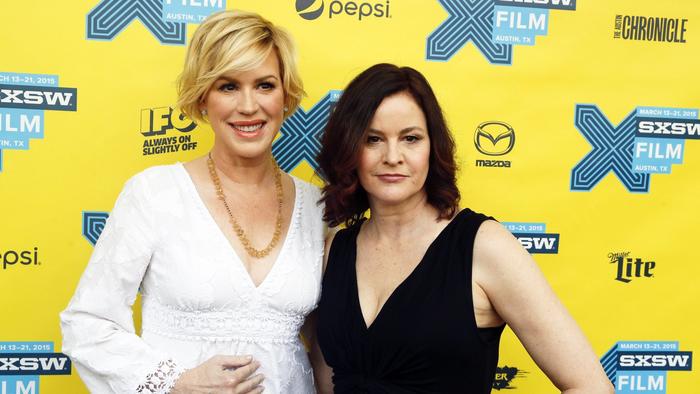 Before a screening to celebrate the 30th anniversary of “The Breakfast Club,” a choir of local Texas students marched on stage and began singing the movie’s theme song.

Three decades after the John Hughes film debuted, the questions posed in Simple Minds’ “Don’t You Forget About Me” still perfectly summarize teenage angst: “Won’t you come see about me?” “Will you stand above me?” “Will you recognize me?”

“We all feel alone, right?” said one of the film’s stars, Molly Ringwald, to the South by Southwest film festival audience after the performance had concluded. “And that message [from the movie] is very powerful, no matter what technology comes along.”

The Fairfield Four, the McCrary Sisters and Brandi Carlile take the SXSW crowd to church There are far too many musicians at South by Southwest to keep them confined to the bars, clubs and theaters of downtown Austin. So all kinds of alternate venues get pressed into temporary service while the festival goes on, including restaurants, street corners and the two churches where I caught performances Wednesday night.

Neither, though, could be described as a make-do-with-what-you’ve-got affair: First, I saw a pair of interconnected Nashville gospel groups -- the Fairfield Four and the McCrary Sisters -- singing at the sanctuary of St. David’s Episcopal Church. Then I wandered around the corner to Central Presbyterian Church for an unamplified gig by the Seattle-based singer-songwriter Brandi Carlile.

As [Carlile’s] voice rang out, bouncing off the church’s high ceiling, you understood what she was after: a moment unimaginable amid the clamor of Austin’s 6th Street.
Mikael Wood 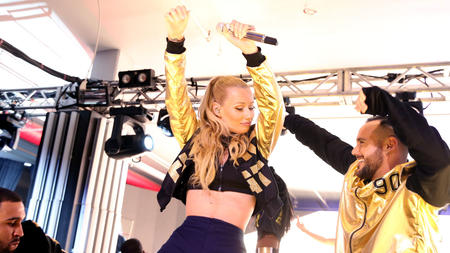 Even in the days before Iggy Azalea’s performance at SXSW, the Internet pounced on a video showing her rapping incoherently -- a small crime for some but a damning one for a white MC many have criticized for appropriating a black style with little regard for its meaning.

So with its high visibility and its audience happily susceptible to spin, SXSW offered Azalea a chance to reclaim her damaged narrative, to brush off the haters and show us why she’s still worth paying attention to. 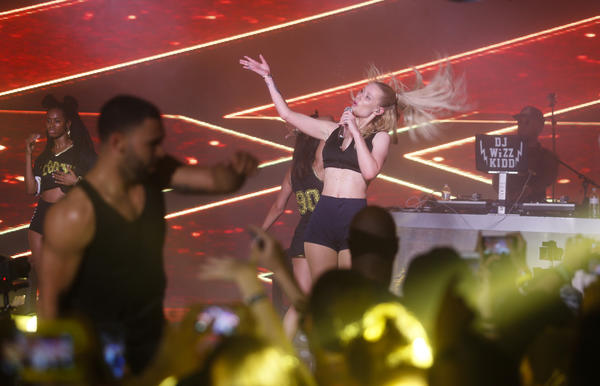 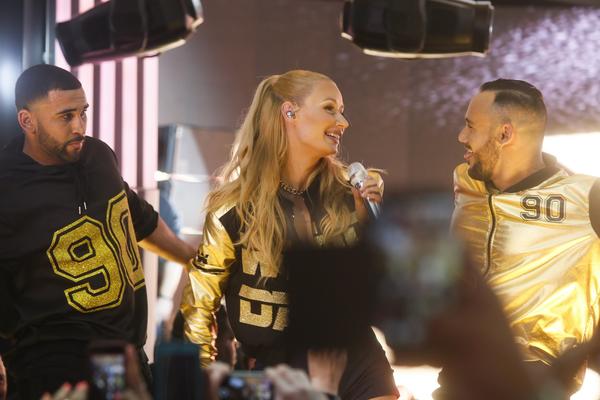 Natalie Prass has already outgrown the tiny space she performed in, which meant getting a glimpse of the stage was mostly impossible. It wasn’t until Prass introduced her band that anyone except those in the first row had any idea that there were four people on stage.

Still, going by sound alone, Prass was in fine form. This is a compliment, but if Cinderella left the Disney films to start a band, it may sound something like Prass’ mix of pop classicism and lush, yet restrained arrangements. Hints of jazz and varying shades of warmth appear throughout as Prass’ tales of love gone wrong unfold, leaving ample space for an orchestra within them.

As a line of more than 200 so-called VIPs snaked around the side of a club Tuesday night in an attempt to see Austin-bred rock band Spoon, an already exasperated SXSW volunteer struggled to maintain control.

Please stay on the sidewalk. We’d like to minimize deaths.
SXSW volunteer

Torres is all taut energy at SXSW

Not every artist will shine in a setting like SXSW. It takes a certain mix of confidence and perseverance to survive this week, and with 20 minutes or less to set up a stage, any sense of perfectionism is better left at home. Tuesday night’s highlight, Torres (real name: Mackenzie Scott), didn’t waste any time getting on stage five minutes early and then packing high drama into taut, guitar-driven songs. ...

There’s a sense with Torres’ songs that a whole life has been lived within them. “Sprinter” views the world as a predatory one, and “Strange Hellos,” the lead single off her forthcoming sophomore album, simmers with tension-building guilt. Songs start out as ballads, and then become something louder, more brute, as Torres lets every chord change creak like a rusty door hinge.

SXSW Film Festival gives out its awards: And the winners are... 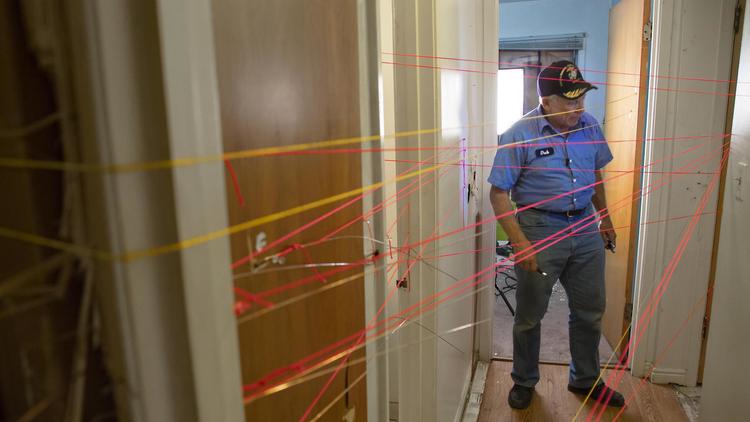 Working off that Texas barbecue 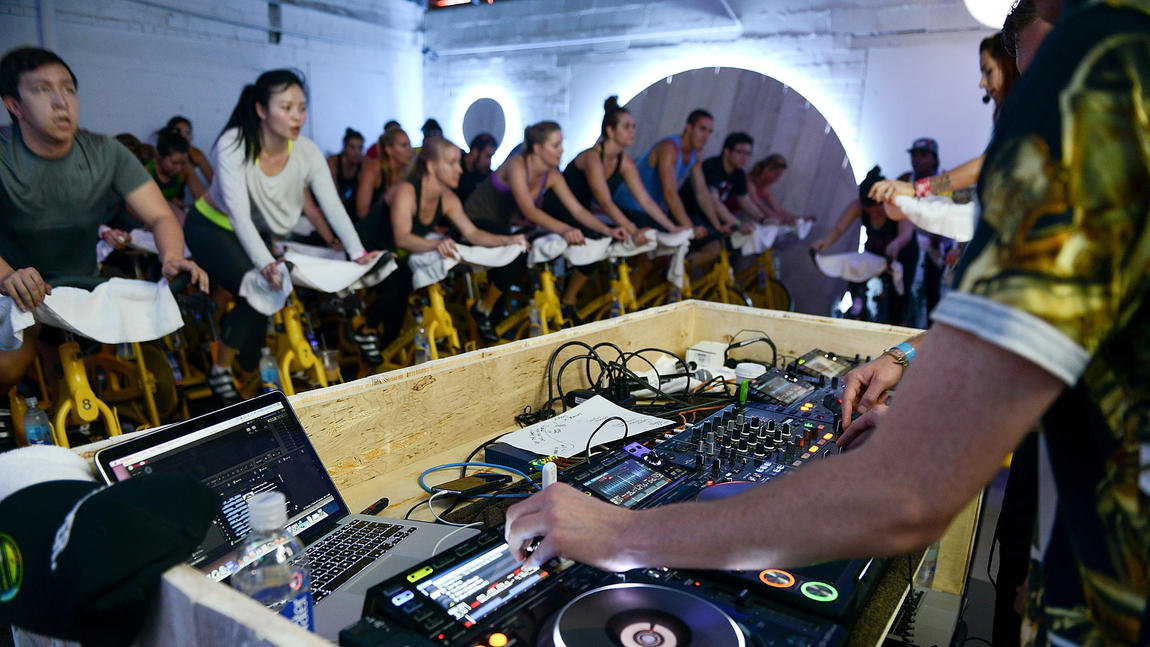 Gorgon City performs at a SoulCycle class at the Spotify House. Check out the latest photos from SXSW.

Game Oven has a touching swan song in ‘Jelly Reef’

“Jelly Reef” looks adorable. At the start, players will have a school of jellyfish -- all of them wide-eyed and smiling. Then, in a matter of moments, they will all be dead.

It was easy to spot “Smooth Operator” on the show floor, as brightly animated tongues twisted and turned and slid around the screen like reptiles protruding from human mouths. It’s a slightly silly, somewhat tricky game of hand-eye coordination, but don’t worry if things go bad. There’s no messy saliva to stress over.

Though it’s simple in conceit, where “Smooth Operator” shines is in its character portraits. There are hippy-looking men, green-haired women, tattooed tough girls and bearded old men. It’s a range of diversity rarely found in far more complex games.

I have to say I felt a lot of emotions, memories.
George Miller, director It was a mix of the old and the new Monday night as SXSW held a screening of the 1981 film “The Road Warrior” with director George Miller in attendance. His upcoming “Mad Max: Fury Road,” the fourth in the series and the first in 30 years, opens May 15, and Miller treated the enthusiastic crowd to two brief selections of footage from the new movie.

From ‘The Road Warrior’ screening

Were you nervous -- and/or how nervous were you -- presenting this in front of a live audience being completely, absolutely and unapologetically ... racist and hysterical at the same time?
Questioner at the Q&A; following the “Get Hard” screening