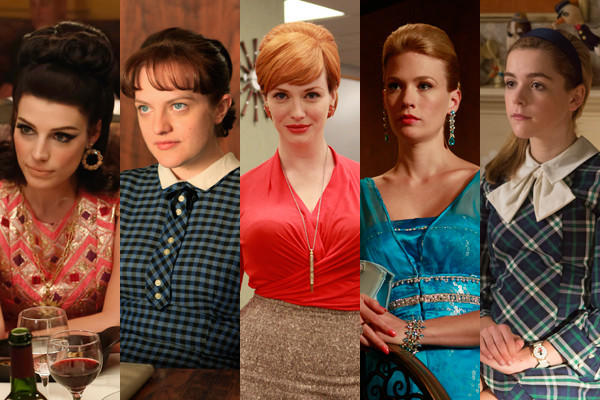 Is “Mad Men” the most feminist show on TV? Despite taking place in the 1960s at a male-dominated Manhattan ad agency, where the men drink, fool around and flaunt their egos with reckless abandon, the show’s most prolific women climb their way out of their fates as unappreciated secretaries to become pivotal players during an era when it was rare to see women break through the glass ceiling or chart their own paths.

Objectifying women, or comparing them to dogs 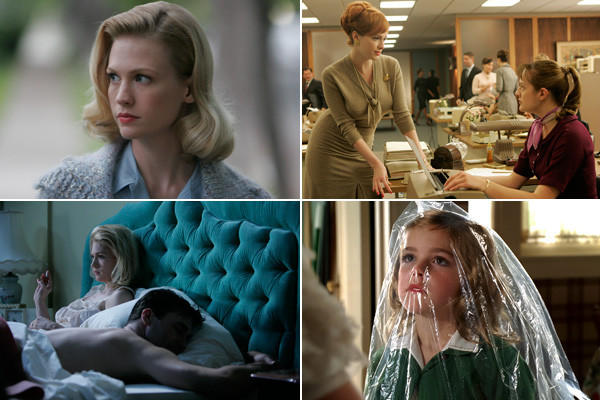 In the pilot episode, office manager Joan gives newbie secretary Peggy a tour of the ad agency. The year is 1960 and Joan’s cringe-worthy advice has nothing to do with the job: “Take a paper bag, cut eye holes out of it, put it over your head, get undressed then look at yourself in the mirror.”

Video: Watch the scene in this retrospective.

Joan is a savvy woman, keenly aware of the effect she has on men, and she uses her appearance to wield power. But Peggy takes another approach, as we see later in the season. When asked how she, a woman, might pitch an ad campaign for Belle Jolie lipstick, Peggy comes up with a “basket of kisses,” referring to a trashcan full of blotted tissues. The male copywriter is so impressed with her idea, he says, “It was like watching a dog play the piano.”

By the end of the season, the agency’s creative director Don Draper promotes Peggy from secretary to junior copywriter. But Don is hardly a good guy when it comes to women. Just ask his embittered, chain-smoking wife, Betty, who he cheats on constantly while she’s stuck in the suburbs with two children she doesn’t seem to have wanted.

Recalling the first season, actress Kiernan Shipka, who plays daughter Sally, says, “It’s hysterical that Betty is more worried about her clothing being on the floor than her daughter having a plastic bag over her head.” 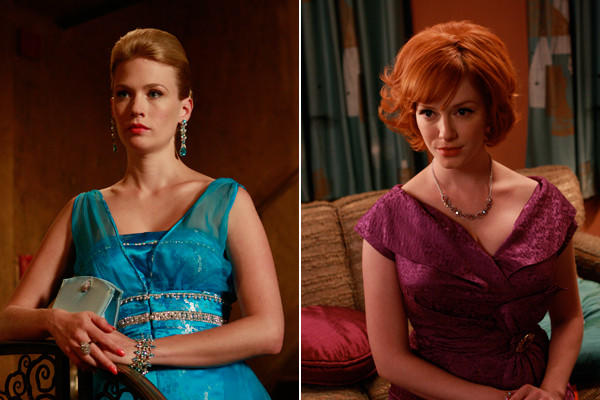 It’s now 1962, the year of the Cuban Missile Crisis. Joan, rather than bonding with Peggy so that they can rise together at the agency, sticks the Xerox machine in Peggy’s office to insult her, remind her of her place. But that Xerox machine comes back to bite Joan when a male colleague uses it to photocopy her ID, revealing her age: 30. Subtext: She’s in old maid territory.

It gets worse for Joan later in the season. Despite holding her own and running a tight ship at the office, she struggles in her personal life. Not only is her fiance threatened by her sexual experience, he punishes her for it by raping her, an event she keeps hidden.

Peggy, too, has a secret. That is, that she had colleague Pete’s baby and gave it up. When she fesses up to Pete, she says she “wanted other things.”

And speaking of babies and wanting other things, when Betty becomes pregnant with her third baby with Don, she wonders whether she should get an abortion. Instead, she copes by having a one-nighter with a stranger at a bar before telling her cheating husband that she’s pregnant. 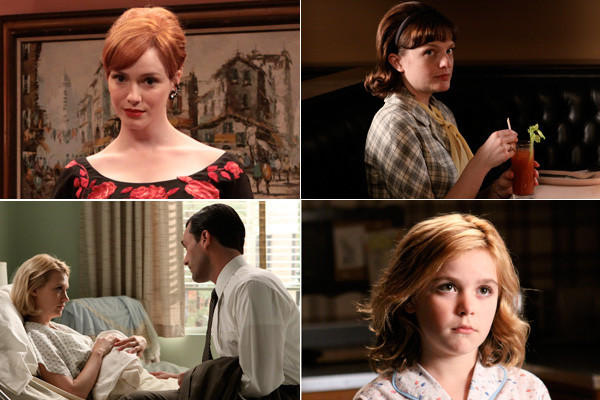 It’s 1963, the year of President Kennedy’s assassination. Peggy has decided to move out of her family home and into an apartment in Manhattan, horrifying her mother, who thinks women should aspire to marriage and motherhood. Alas, Peggy is a modern woman.

Joan on the other hand, does care about getting married. If only her fiance amounted to more and didn’t humiliate her.

It’s Betty’s story line this season that’s the real heartbreaker, though, as she desperately, and sometimes helplessly, navigates her world. When her father, Gene, tries to talk to her about his will, for example, Betty asks him to keep it to himself: “I’m your little girl,” she pleads. And don’t forget, this is the season she buys a Victorian fainting couch. The real kicker is that she finally decides to leave her cheating husband, regardless of the fact that they just had a baby—but she just finds another man to take care of her, which to Don makes her a whore. And while new guy Henry Francis, a man with political ambitions, seems nice, they don’t really know each other very well. Is it love or desperation?

One uplifting moment from the Draper house front: When Grandpa Gene bonds with Sally and encourages her to become anything she wants.

As the women rise, the men fall apart 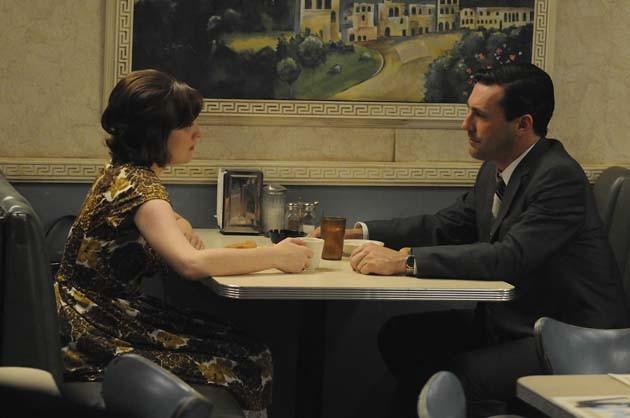 The year is 1964 and Peggy has just turned 26. What does she do to celebrate? She flakes on her date and stays at the office to work on an ad campaign. True, she does give Don a hard time, saying “You never say thank you,” to which he responds, “That’s what the money is for!” It’s a particularly harsh thing to say to someone who goes so above and beyond in her job that she’s willing to miss her birthday dinner. Still, when Don takes her to a diner, she says, “I know what I’m supposed to want, but it just never feels right, or as important as anything in that office.”

Peggy’s budding feminism is complicated, though. “You get the sense that Peggy’s feminism is, at least in part, a defensive stance. She doesn’t want to believe that she’s supporting racism, so she counters with the specious argument that hey, she’s a victim, too,” writes The Times’ Meredith Blake. (Peggy’s particularly lamentable later in the series.)

Meanwhile, as the women at the agency rise, the men come apart. “It’s no coincidence that the female ascendancy has coincided with utter disarray among their male colleagues—most notably, with Don’s descent into alcoholism. This episode—called ‘The Beautiful Girls’ — showed us just how gross this disparity has become,” Blake writes.

This season, we also see Sally’s streak of independence when she takes the train to come visit her father in the city—only to have her wings clipped by what turns out to be a humiliating experience. Enter Megan Calvet, Don’s secretary, and the only person we’ve seen be truly compassionate to Sally. 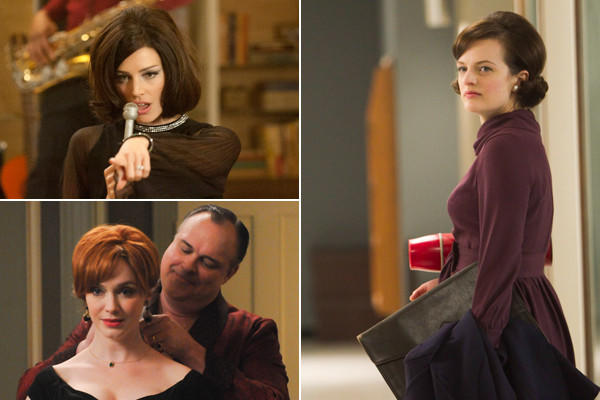 It’s 1966 and Joan is facing the harsh realities of what it means to navigate the workplace while female and the difficult, often complicated decisions that come with it.

When she is on maternity leave, for example, she worries about her job security. (Do the men at the agency worry about losing their job after having a baby?) Later in the season, after getting served divorce papers, she’s left to fend for herself and her baby. Now it’s fight or flight for Joan and she agrees to sleep with a potential client to seize a lucrative account while also securing a 5% stake at the ad agency. “Joan finally gets the partnership she’s long deserved but she has to pay an almost unimaginable price to make it happen,” Blake writes.

Peggy, meanwhile, accepts another, more lucrative job after Don, her mentor, throws money at her face during a frustrated fit. Finally, she’ll get paid what she’s worth. And it’s not just any job, but a gig as copy chief at a rival agency. Later, Peggy’s new agency merges with Don’s, and they reunite.

Analyzing the characters, Blake writes: “Joan, a woman whose considerable business savvy will always be secondary to her sex appeal, represents the endgame of the pre-feminist playbook. She’s essential, but she’ll always be devalued because she does ‘women’s work.’ Peggy is every bit as competent as Joan, but she’s a creative and therefore gets ahead by effectively neutering herself—by dressing like a boy and tossing back whiskey like it’s water.”

This season, we also get to better know Megan, possibly the show’s most modern woman. No longer Don’s secretary, she’s now his wife and she’s secured a creative position at the agency. But she has her sights set on an acting career and she fights Don when his controlling tendencies emerge. She also gives us a look at a non-traditional, non-suburban wife with “Zou Bisou Bisou.” 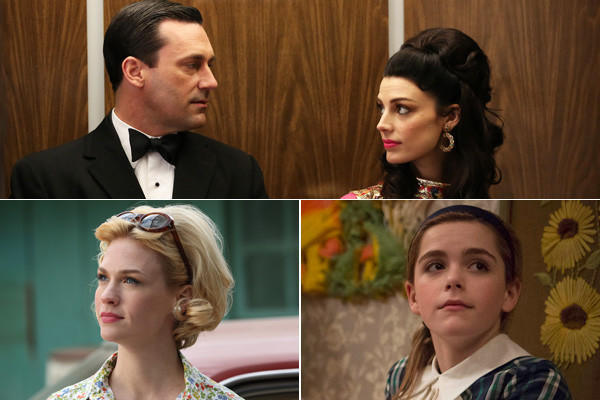 It’s now 1968. Megan’s acting career is on the rise and she keeps at it despite Don’s jealousy over a love scene she films. Never mind that he’s cheating on her with their neighbor and mutual friend.

Betty, too, gets tangled up in Don’s world. They sleep together, which means they are both cheating on their spouses. She is older and wiser now, and it’s only a one-time thing.

Sally, meanwhile, is experimenting with cigarettes and alcohol. But what makes her truly bold is how she confronts her father when she realizes she does not know him, nor does she trust him. She may be just a young woman, but she’s holding him accountable.

And Joan and Peggy go rogue, and pitch for Avon behind their male colleague’s back. As Blake writes: “Desperate to prove her worth as something other than an office tour guide/concubine, she cuts Pete out of the meeting with Andy Hayes. As extraordinarily capable as Joan is, she’s clearly out of her comfort zone, and as the meeting ends, Avon seems anything but a sure bet. Peggy is livid and, back at the office, makes her frustration clear. It’s a fantastic scene, one that works, in part, because the motivations of both women are so clear and so sympathetic. Joan wants to prove she has something to offer other than her body, while Peggy just wants to win the business.” 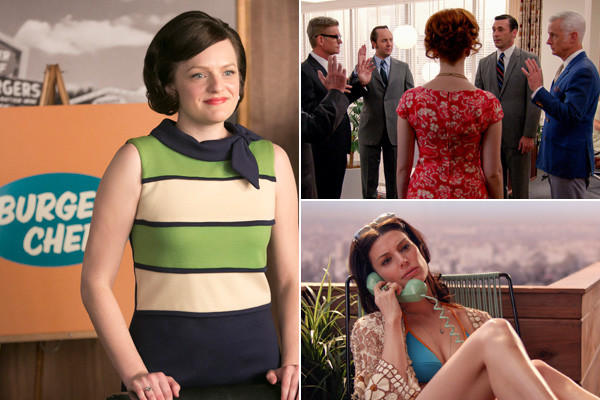 It’s 1969 and Betty, as Blake writes, “has transformed into a monstrous political wife, one a little too thrilled with the reflected glory of her husband’s mildly successful career. ... In some ways, Betty was born to play her current role, which plays both to her vanity and to her insecure dependence on men.” But Betty’s also bored and seemingly jealous of women who have jobs and identities outside their husbands.

Betty’s still as superficial as ever. When Sally breaks her nose, Betty says, “It was a perfect nose, and I gave it to you.” Sally reads between the lines and snaps: “Don’t worry about me finding a man. I already have you to keep me in line.”

Joan gets a promotion, but as Blake points out, it’s “not because the world is a fair, meritocratic place, but because a man in power makes a decision on a whim.”

Peggy has gone from taking assignments from Don to assigning him work. And that’s not the only major shift. When working on a campaign pitch for Burger Chef, “Peggy imagines the many reasons a frazzled mom might find comfort at Burger Chef: ‘She burned the roast, she dented the fender, she backed over the dog, little Katie’s pregnant, Jimmy got drafted but there’s still burgers and fries on the table.’”

“Peggy is speaking off the cuff, but her impromptu speech gets to the heart of the broader social changes underway -- not just the war, but the rapidly shifting relations between the sexes,” writes Blake. “It turns out Peggy’s having so much difficulty with Burger Chef because she’s pitching to a phantom customer -- the idyllic, 1950s family with two perfect children.”

And Megan seizes her independence in California, and decides to move on from Don.

Former Los Angeles Times staffer Alexandra Le Tellier was a senior digital editor in the Entertainment and Features sections. She left The Times in 2016. She was previously web editor for the Opinion pages, where she managed the daily web pages and special digital projects. She also oversaw the section’s blog, editing contributing bloggers and writing posts about social, political and cultural issues. Prior to joining Opinion, she was deputy editor of The Times’ entertainment and lifestyle weekly Brand X. She is a native of Los Angeles.