A long day on life’s menu for chef Josef Centeno

A long day on life's menu for chef Josef Centeno 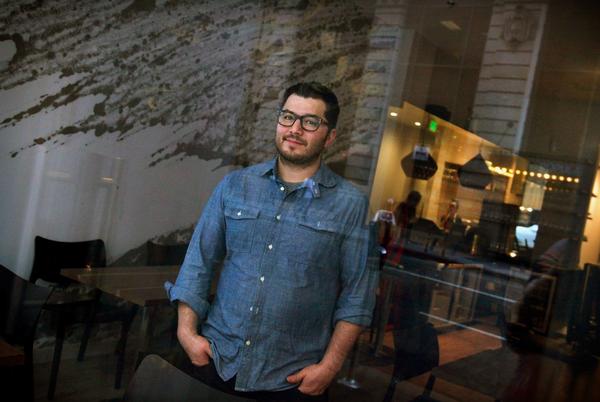 When you own three restaurants, a 16-hour day on your feet is an accepted reality. It's something with which Josef Centeno, chef and owner of restaurants Bäco Mercat, Bar Amá and Orsa & Winston, is all too familiar.

The 39-year-old chef, who previously worked at Lazy Ox, Meson G and Opus, hasn't taken a real vacation in years. It's impossible when your world revolves around three restaurants and your loft, all within a one-block radius of the old bank district centered at Fourth and Main streets in downtown Los Angeles.

Each day, around 7:30 in the morning, Centeno squeezes in a workout at the gym, or at least tries to. Then he's off to the restaurants, where he listens to an endless barrage of questions and concerns from his staff, which has grown from a handful of people to include nearly 150 employees.

Sometimes it can get a little overwhelming, and no one is more surprised by his success than he is.

"I'm actually surprised that people come to the restaurants every day," said Centeno. "When I walk in, I'm like, 'Oh, my God, there are people here."

He wears the hat of a chef, restaurant owner, entrepreneur and general problem solver each day, but he's hungry for more. After opening his three restaurants in the span of three years, he's looking to expand to the Westside, working on a Bäco Mercat cookbook and figuring out how to cook for VIPs at the Coachella Valley Music and Arts Festival. 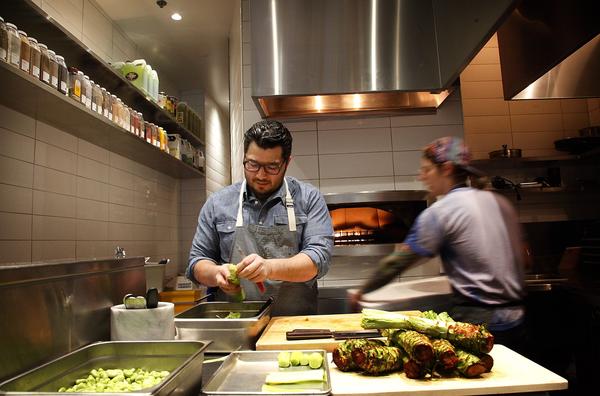 10:05 a.m.: On a recent Wednesday, Centeno is sitting at a corner table at Orsa & Winston, dressed in a midnight blue shirt and jeans, answering questions on the resurgence of Tex-Mex for a Daily Beast article. Classical music is playing, and Centeno's soft voice is barely audible over the notes. His eyes are hidden behind dark gray, thick-rimmed glasses, and a couple of silver hairs pepper his slicked-back, mostly jet-black mane.

10:38 a.m.: He settles into the quiet kitchen to start prepping egg and beef cheek ravioli for dinner at Orsa & Winston. He takes a couple of tools and a knife out of a Home Depot black toolbox, which sits in the corner of the kitchen. Using a dowel, he rolls out the pasta into delicate thin sheets. He dips his hands into a large mixing bowl of egg yolks and carefully scoops up the bright orange globes to put in the middle of each ravioli.

11:03 a.m.: Centeno walks through the back of Orsa & Winston into Bar Amá next door. Loud rock music and the sound of pots clanging fill the room as he enters the main dining area. He pops his head into the kitchen to check on the staff, then reemerges minutes later on his phone, scrolling through the thousands of emails he says he receives a day.

11:14 a.m.: Centeno walks out of the front door of Bar Amá onto Fourth Street and heads around the corner to Bäco Mercat. The Game's "Too Much" is playing loudly, and a man wearing an apron is crouched in the dining room trying to clear the boxes of wine and beer that have to be moved out of the walk-in refrigerator while it was being repaired before lunch service starts.

After a walk-through and ensuring the refrigerator crisis is under control, Centeno takes out his phone to show off a picture of the new T-shirts he's working on for his three restaurants. "It's like a zombie, Judge Dredd/Marvel comic, but more like heavy metal," he says. Elements from all three restaurants are represented with a bäco, Iberico ham, a Bäco Pop bottle (the homemade soda Centeno sells) and, of course, pictures of Bear and Winston, his dogs.

He is in his zone, Zen-like and in control, never raising his voice, never rushing around.

12:01 p.m.: Centeno steps into the lobby of the San Fernando Building, where Bäco Mercat sits on the first floor, to meet with Minh-son Dang, who runs a rooftop garden. He is accompanied by pastry chef Isa Fabro, sous-chef Joel Stovell, and his chef de cuisine, Andy Villaluna. On the rooftop, Centeno, armed with a tape measure, contemplates garden bed sizes and what to plant where. He's hoping to have everything planted soon so that he can use the herbs and other greens at Orsa & Winston by the start of summer.

1 p.m.: Centeno walks back down Fourth Street toward Bar Amá and gives a quick wave to Tom Gilmore of Gilmore Associates, the developer behind the revitalization of the old bank district. Gilmore took a chance on Centeno and gave him the space to open all of his restaurants.

When he walks back into Bar Amá, it's the middle of the lunch rush. He takes a look around, then heads through the back and into Orsa & Winston to finish prepping for dinner. He reaches into a messenger bag and discreetly pulls out a bottle of five-hour energy drink and downs it in seconds. For a man who lives in a world of fine food, his diet resembles more that of a video gamer.

"For me, eating is enjoyment, and I don't want to sit down and do it if I can't be relaxed," Centeno explains. He admits to maybe eating a protein bar or a cucumber salad once in a while. He takes a MacBook Air out of his bag and sits at the chef's counter to go over his inventory to start on the night's menu.

1:34 p.m.: He types up the finished menu with egg yolk smudged and crumbling on his forefingers. "Chef, can we meet at 2 p.m.?" Villaluna asks. "No, I really wanted to walk the dogs," replies Centeno without looking up from the computer. "Let's push it back."

2:05 p.m.: It's time to walk the dogs, the two Brussels Griffons he named the restaurant Orsa ("bear" in Italian) & Winston after. Centeno is naturally serious, but he grins at the sight of the dogs. He walks out into the alley next to Bar Amá and continues down the gravel pathway about half a block to the building where he lives. As soon as he puts the key in his lock, the barking starts. "They actually are a huge stress relief for me," says Centeno as he straps leashes around the dogs' necks. "I mean just dealing with everything, they are like the lighthearted part of my day, and they kind of mellow me out a little." 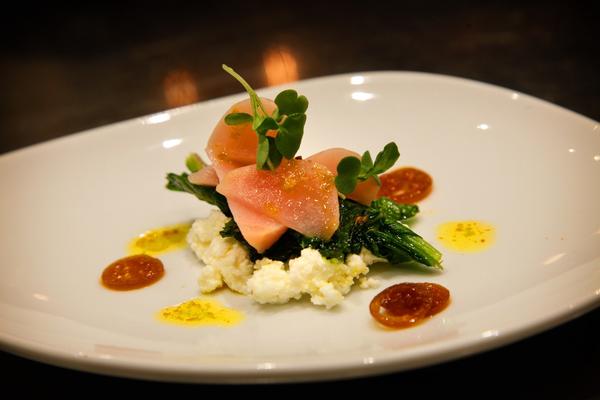 3 p.m.: Centeno sits at a table at Orsa & Winston with Villaluna and Mike Hoagland, his director of operations. Centeno has agreed to cook in the VIP tent for both weekends of the Coachella music festival, and the three men are trying to figure out the best dishes to serve to thousands of music fans in the desert heat. "Maybe a mulita?" suggests Centeno. "Oh, and when we're done with Coachella, we have to figure out how we're going to test 250 recipes for the cookbook."

4:30 p.m.: The meeting is finished, and the three decide to put off their discussion of the employee evaluations until a later time. Centeno returns to the Orsa & Winston kitchen and is looking forward to losing himself in his prep work for the next 90 minutes before his first reservations arrive. "Prepping is therapeutic," says Centeno. "I wish that was a big part of it, but now there are just so many other things to do in between. I miss those days when that was all I had to do."

4:45 p.m.: The shipment of Bäco Pops headed for downtown breaks down. Knowing the bottler won't be able to make it to the restaurants for several days, Centeno has no choice but to drive to Monrovia and pick up 40 cases himself.

5:45 p.m.: Pops rescued, Centeno is back in the Orsa & Winston kitchen, where he will spend the rest of the night cooking, finally. He is in his zone, Zen-like and in control, never raising his voice, never rushing around.

11 p.m.: After dinner service is over and the last customers have left, he stops by Bäco Mercat and Bar Amá to check the numbers. Then he heads home to sleep, only to wake up the next day and do it all over again.

"All I really think about every day is to come in, get the food ready, try to make people happy and try to make sure it's consistent," said Centeno. "The day I don't feel that way, it will be gone."

Your guide to great pizza in Los Angeles 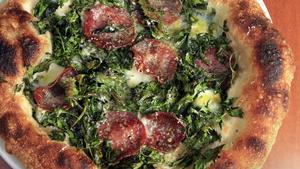 We have a complicated relationship with pizza in Los Angeles. ” 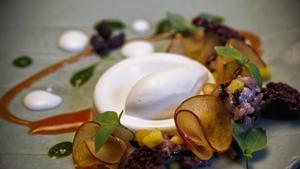 But in a pendulum swing to the fantastical, the pastry chef is ripe for a comeback. ” 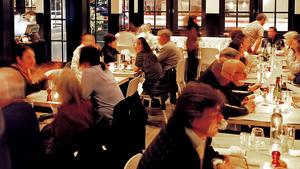 Los Angeles can be one of the most pleasurable places to eat on Earth. ”

Jenn Harris is a columnist for the Food section and host of “The Bucket List” show. She has a BA in literary journalism from UC Irvine and an MA in journalism from USC. Follow her @Jenn_Harris_.