How to relieve stress during a pandemic? #quarantinebaking

Jessica Reed has baked a cake almost every day since the coronavirus crisis upended her daily routine several weeks ago.

Reed, who goes by “The Cake Historian” on Instagram, is known for designing cakes inspired by history, literature and her personal mental health battles. Lately her output has swelled in proportion to her coronavirus-induced stress.

“With something like this, where it feels like the whole world is having an anxiety attack, the way I process my feelings is by baking,” said Reed, 44, a freelance writer and artist who lives in Portland, Ore., with her husband and daughter.

In the past month she has produced several desserts sparked by quarantine-related anxiety, including kitchen-sink “chaos cookies”; a rosemary-lemon applesauce “four thieves cake” inspired by a medieval folk tale about the bubonic plague; and a “self-isolating” chocolate stout cake.

Most of what she bakes is parceled out to friends and neighbors; baking itself, not eating what she’s made, is the palliative.

“A lot of baking that I do is related to mental health. It’s sanity-saving. Particularly right now in this unprecedented landscape we’re living in,” she said.

Four Thieves Cake: Rosemary Lemon Applesauce Cake with Cloves and Cinnamon, topped with Toasted Eucalyptus Meringue. Folklore tells one tale of four former spice merchants in 15th century France who, upon the arrival of the Black Plague, turned to stealing from the bodies of the dead. When captured, the king promised them leniency if they revealed their secret formula used to protect them from contracting the deadly disease. They eagerly shared their combination of cinnamon, cloves, rosemary, lemon, and eucalyptus which came to be called Four Thieves Vinegar. A blend of those essential oils is known today as Thieves Oil (@youngliving holds the patent on that name) or Four Thieves Oil and is still used for a variety of purposes. Recipe going out to Sugar level + Patron subscribers later today 💖. Thanks @oldeways for enlightening me 🖤. #thievesoil #fourthievescake #eucalyptusmeringue #conceptualcake #coronabaking #applesaucecake #anxietybaking

Reed is part of a baking boom that’s driving thousands of homebound Americans into their kitchens to knead dough and bake cookies as a way to cope with life under quarantine.

History shows that people bake in times of distress and uncertainty. In their book “September 11 in Popular Culture,” professors Sara E. Quay and Amy M. Damico note that sales of baking supplies surged in the weeks after the Sept. 11, 2001, terrorist attacks.

“Anxiety baking” — a concept that describes both worry-driven baking and its therapeutic benefits — entered the popular lexicon in 2018, the year the American Psychiatric Assn. reported that Americans experienced a sharp increase in anxiety over their health, safety, finances, relationships and politics.

“A lot of people I know are caught in a web of anxiety right now,” said Lisa Kring, a licensed clinical social worker who also teaches meditation in Los Angeles.

“A physical activity like baking, which grounds us in the direct experience of the body and our senses, is a natural antidote to anxiety,” she said.

“When we bake, the worry gets put on the back burner.”

Baking is different from other forms of cooking because it relies so heavily on measurement and exacting chronology.

“It involves time and a sequence of steps. That creates more absorption into the task. You really have to be present and attentive or you’ll screw it up,” Kring said.

What are people baking? The most-visited recipes on the King Arthur Flour website, which has a compendium of more than 1,000 baking recipes, involve bread or sourdough starter, said Bill Tine, vice president of marketing at the Vermont baking supplier.

“Bread is something that you just need, and it can still be challenging to get at times in grocery stores,” Tine said.

“And there’s a huge group of people that find it a soothing thing to do.”

The renewed interest in bread baking reflects an eagerness to get back to basics, Kring said.

“This time of quiet and stillness is bringing us to a place where we see what is most important and the rest we are letting fall away.”

She was inspired by a friend who shared pictures of his home-baked breads on social media.

Until recently, Lieblein maintained a frenzied TV production schedule that kept her out of the house for most of the day.

With production shut down indefinitely and a statewide directive to stay home, baking has helped her cope with the tedium and time-blurring quality of her new schedule.

“Every day was blurring into the next,” she said.

“Today I got up and knew I had to start proofing the bread. It feels like I’m actually getting something done in the day,” she said.

And with her daughter home from school, baking has become something they can do together.

“It’s extremely rewarding to make bread that I know my boyfriend and daughter can have for dinner,” Lieblein said.

Learning to bake bread has been the easy part, Lieblein added. Finding commercial yeast is another story. She recently hunted for it at various stores before finally ordering it on Amazon.

A surge in pantry stockpiling has triggered a run on flour and sugar, according to the market research firm Nielsen. There’s also a shortage of commercial yeast, according to the Counter, a nonprofit news organization that tracks Americans’ food habits.

Suppliers are scrambling to meet the demand.

There is plenty of wheat in silos and commercial yeast in production, Tine said. But there are bottlenecks in the supply chain, he explained: Currently there’s about a one- to two-month lead time on packaging.

The yeast shortage has inspired some novice bread bakers to make their own sourdough starter for the first time, a process that in its simplest form involves cultivating yeast by combining flour and water and letting it sit for several days until it bubbles and froths.

“My social media feeds are exploding with people doing sourdough starters,” said Irvin Lin, 46, a San Francisco designer and cookbook author who blogs at Eat the Love. “Feeding” starter, like keeping a houseplant alive, requires minimal but consistent attention. Many bakers name their starter as they would a pet.

“I think a lot of people are making starter because it’s something they’ve wanted to do. It’s finally a good time to start that kind of project,” Lin said.

Lin has built an online following by sharing carefully researched recipes and exquisitely lit photographs of his baked goods.

In the age of #coronabaking, he has felt less pressure to exude perfection.

“I think there is a little bit more honesty and vulnerability happening with bakers online. We’re all in a fragile state,” he said.

At the beginning of March, as the severity of the pandemic was coming into brutally sharp focus in the United States, Lin was accompanying his mother, a breast cancer survivor, to her daily radiation therapy sessions.

He stopped going grocery shopping for several weeks to avoid the danger of spreading the virus to his mother.

“I had to dig deep into my pantry. I began baking with ingredients I didn’t even know I had,” Lin said. “Suddenly I found that getting into the kitchen really relaxed me. It was a way for me to be meditative. I didn’t take notes or worry if I should be taking photographs.

“It made me bake more creatively. More for myself as opposed to perfecting recipes for my blog or baking for Instagram,” he said.

A showcase for compelling storytelling from the Los Angeles Times.

The hardest part of baking in a pandemic is not the potential for running out of flour or yeast, Lin said, but finding a way to share the bounty.

Normally, he would bring a tray of cookies or brownies to his ceramic studio, or pack some treats for his husband to share with co-workers.

But a freezer can hold only so many brownies.

“I don’t have the freezer space and I haven’t yet figured out if I can hand out [baked goods] to friends of mine in a socially distant, safe way,” Lin said.

“Maybe I’ll go for a walk and drop some off at their house. You know, maybe ring the doorbell and run away?” he said with a laugh. 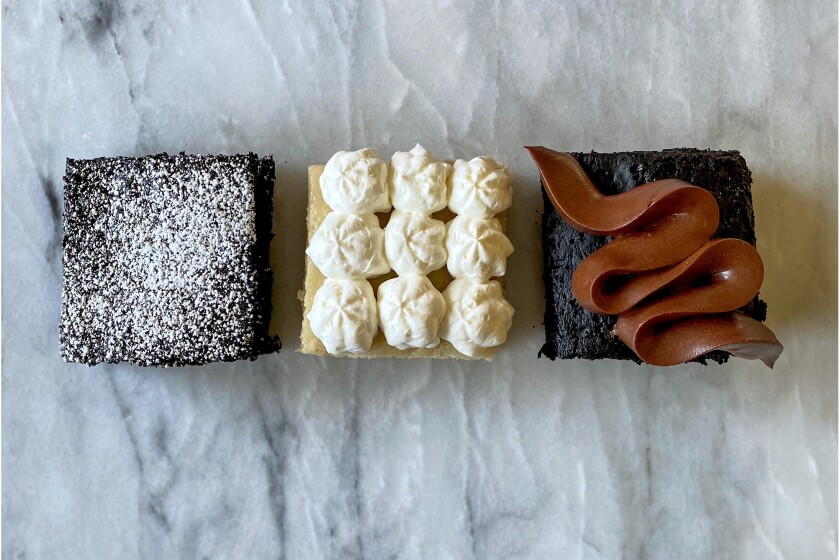 Patricia Escárcega was a restaurant critic at the Los Angeles Times from December 2018 to April 2021. A Southern California native, Escárcega was born in Riverside to a family of naranjeros (citrus pickers).