26.2 survival tips for the L.A. Marathon

At this point, on the eve of the Los Angeles Marathon, you can’t get in better shape. You either trained or you didn’t. But you can survive and thrive if you have a strategy to avoid cramping and injury, and take advantage of the peculiarities of Los Angeles’ hilly, attraction-studded “Stadium to the Sea” course. 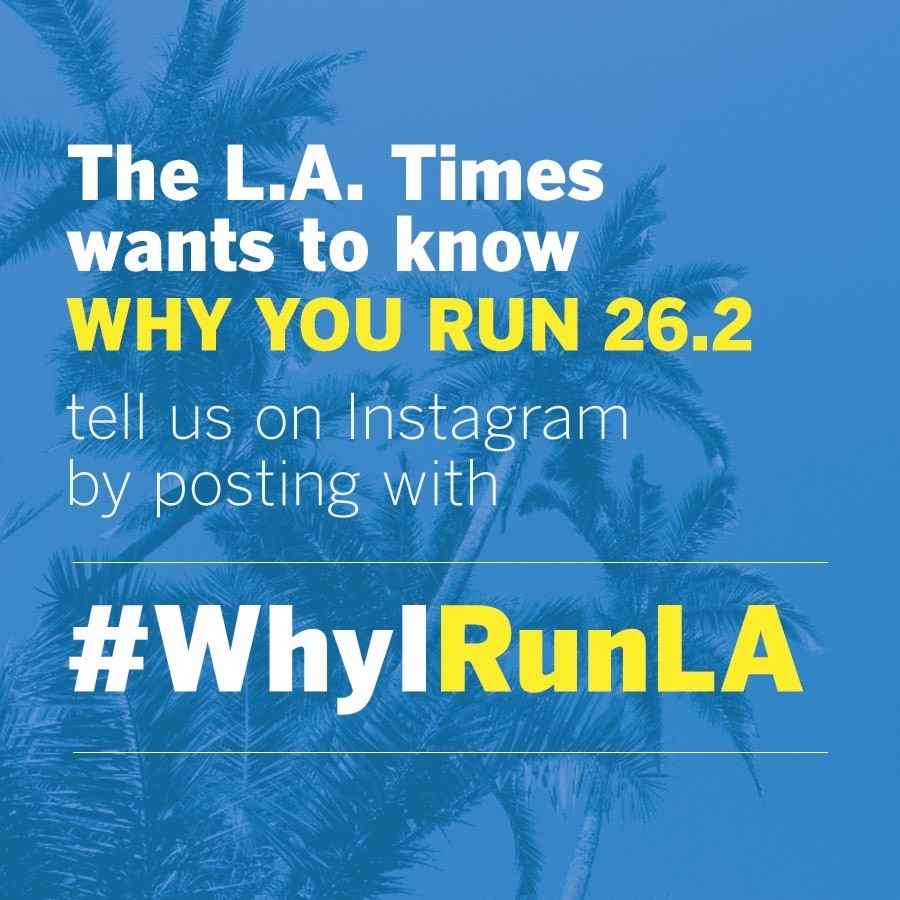 Here are 26.2 nuggets of advice from three guys who should know: Rod Dixon, the 1983 New York Marathon winner who was the longtime director of coaching and training for the L.A. Marathon and now runs the Rod Dixon’s Kids Marathon Foundation; Santa Monica physical therapist Robert Forster, author of “Healthy Running Step by Step,” who has helped train dozens of Olympic runners and will provide massages and food to hundreds of marathon finishers at his 5th Street and Wilshire Boulevard location; and Steve Mackel, who has coached 400 people to run the marathon through his Sole Runners training clinics.

MORE: Get our best stories in your Facebook feed >>

Make time for a Hollywood selfie: “The L.A. Marathon is not about a [personal record]; it’s about seeing the city,” says Mackel. “And no other marathon has the Disney Concert Hall, Hollywood Boulevard’s [TCL] Chinese Theatre and West Hollywood.”
Expect to go slower than normal: “Stadium to the Sea is a hilly course, a thinking man’s course — not a speed course,” says Dixon.
If you’re going for a PR, warm up with at least 20 minutes of stretching, jogging and sprinting before the race, says Forster.
Let your fast friends go: Run at your pace, not your buddy’s.
Draft a training group that runs at your ideal pace. (Groups are identifiable by a pace leader carrying a sign with the group’s target finish time.)
Don’t try to make up for lost time: “In a marathon, you’re an economy car,” says Dixon. “Accelerate too fast and you burn up too much gasoline.”
There’s no shame in walk breaks.
Eat early to allow for digestion.

Carry some salty snacks. “I’d say 90% of the limping, cramped runners with grimacing faces who I see after the race took in little or no salt,” Forster said. Eat early to allow for digestion.
Don’t overdrink: Too much fluid can cause distress (and time-consuming bathroom breaks).
Follow the 10-30-45 Rule, says Mackel: Take a sip of water every 10 minutes (roughly every aid station); nibble something salty every 30 minutes and eat 100 calories every 45 minutes.
Keep yourself cool with what Forster calls the “hydro-squat,” a 45-degree, leaning-forward squat, which allows you to dump a cup of water on your face, head and body while keeping your socks and shoes dry.
Ban the heel strike. Land on your forefoot with a bent leg and take short steps that land under your body, not ahead of it. This method creates less stress on the body.

Interactive: Run the race without ever breaking a sweat >>

Keep arms bent at 80 degrees (just under a right angle), and swing them in a vertical plane alongside your body, not sideways across your chest, which wastes energy. You want all motion directed forward.
Manage the hills. “Lean forward and drive your arms,” says Dixon.
If you start to cramp: Slow down, take in more water and something salty …
… Stop and stretch for three minutes. “It’ll save you 20 minutes,” says Forster.
No new shoes: Fresh shoes might look good, but they may rub you the wrong way on race day.
Choose a comfortably snug-fitting fanny pack for your smartphone and snacks. (You don’t want the pack flopping around.)
Don’t freeze on race morning. Wear an old sweatshirt you don’t need and toss it aside at Mile 3.

Don’t forget your hat and sunscreen.
Men who stay on the course for more than four hours tend to suffer chafed nipples, says Forster, so put Band-Aids over them.
Lube up with Vaseline before the race, hitting nooks and crannies that rub.
If you train with a heart-rate monitor, set it to beep when your heart rate goes above your aerobic zone. (It’ll keep you from running too fast and burning out.)
Designate an emergency contact who will be on standby in case something goes wrong and you need a pickup. And then hope you won’t need the assist.
Involve your family, says Dixon: Station your peeps at spots along the course to give you a banana, some jerky, or, best of all, a high-five and a cheer.

Save a little energy so you can run across the finish line with a big smile on your face. (That’s when your finisher’s photo will be taken!)

The Marathon Goddess is running her 100th in L.A. -- all to raise research funds

Irvine-based Roy M. Wallack writes about health and fitness for various publications. An endurance cyclist and runner, he has competed in some of the world’s toughest athletic challenges, including the Eco-Challenge, the 750-mile Paris-Brest-Paris ride, and the Badwater Ultramarathon. His latest book is “Bike for Life: How to Ride to 100.”