Number of days with temperatures above 95°F to soar in L.A. County

By 2050, parts of Los Angeles County are forecast to experience triple or quadruple the number of days of extreme heat if nothing is done to control greenhouse gas emissions, placing further demand on the region’s drinking water and electricity, according to two new reports by UCLA scientists.

That could mean that by mid-century, downtown Los Angeles could see an average of 22 days of extreme heat — days in which the high temperature exceeds 95 degrees — up from an annual average of six days recorded between 1981 and 2000.

The San Gabriel Valley could see the number of extreme heat days rise from 32 a year to 74. Long Beach? From four days a year to 16.

Below is a map of forecasted increases in extreme heat days by 2050, as analyzed by UCLA scientists by water district, if nothing is done to limit carbon dioxide emissions in the air.

Mouse over areas in L.A. County to see more specific data for every water district. Zoom out to see northern L.A. County.

Proof of rising temperatures is already in the historical record: The annual average in 1878 in downtown Los Angeles was 62 degrees. By 2014, it was 68 degrees.

The forecasted rise in temperatures, published this week in the Journal of Climate, was done by calculating global simulations of climate change to a neighborhood scale if nothing is done to rein in greenhouse gas emissions that cause global warming.

Places in Los Angeles County farther inland, especially the valleys, will feel the pain the worst because of their distance from the Pacific Ocean, which has a moderating effect on extreme temperatures, said Alex Hall, a professor at the UCLA Department of Atmospheric and Oceanic Sciences and co-author of the study.

“Climate change is inevitable in this region,” Hall said. “We have to adapt to climate change.”

In analyzing the forecasted rise in temperatures, researchers at the UCLA Luskin Center for Innovation published a separate analysis Thursday warning that water systems in areas such as the San Gabriel Valley will find their supplies of drinking water heavily taxed by the days of withering heat.

Some of the worst-hit cities will be suburbs where the thirsty lawn is cherished.

Number of days per year with temperatures above 95°F* 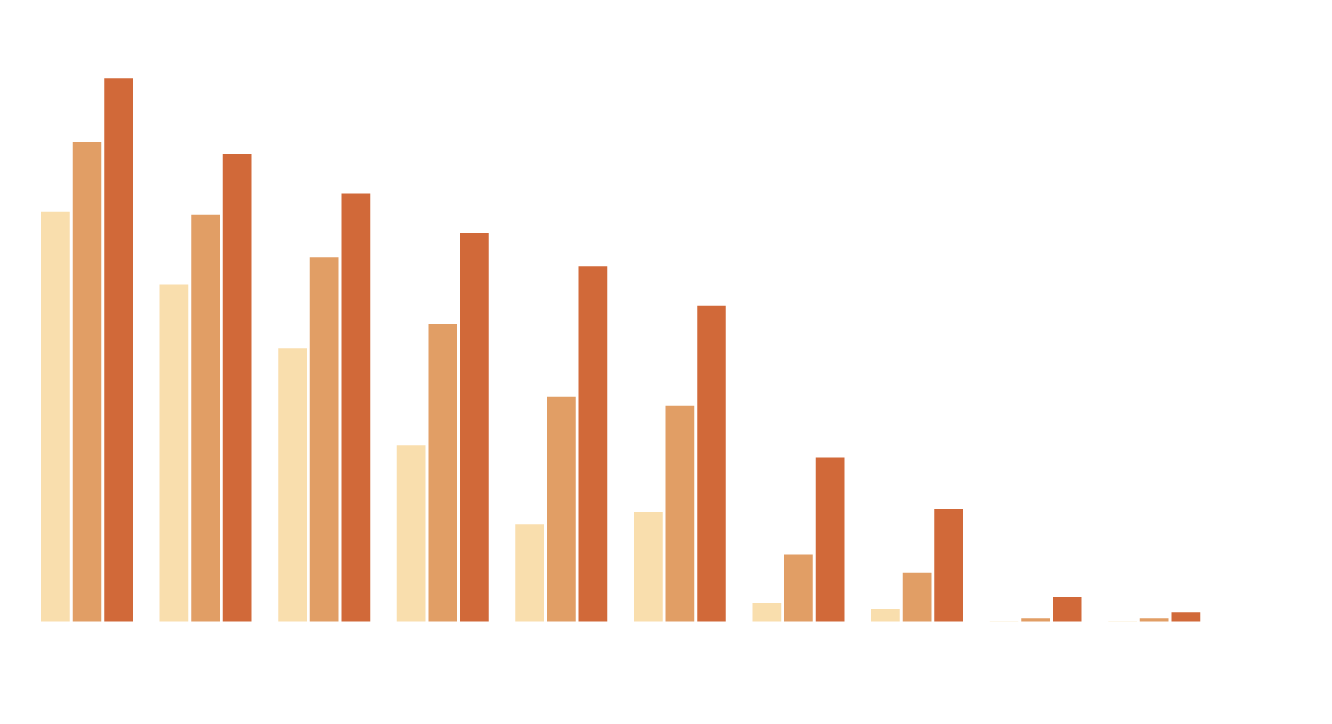 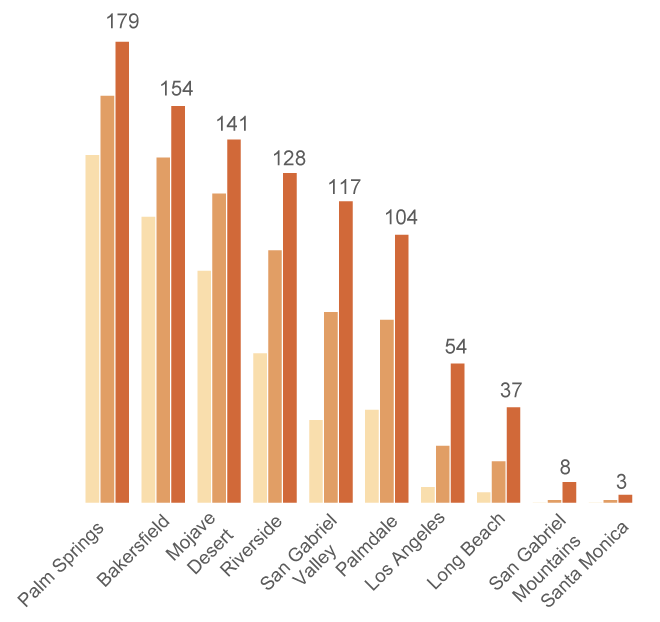 Pasadena might see an additional month of temperatures higher than 95 degrees, according to the UCLA Luskin report. It’s predicted to be worse farther inland: A water system serving Arcadia might see 40 additional days of extreme heat; San Marino could see 41; El Monte, 44; and Baldwin Park, 45 more days of scorching weather.

The situation is even worse by the year 2100. By then, downtown Los Angeles could face a total of 54 days of extreme heat a year, and the San Gabriel Valley, 117 days. By then, Palm Springs could see nearly half a year — 179 days — of soaring temperatures.

“Except for the highest elevations and a narrow swath very near the coast, land locations will likely see 60 to 90 additional extremely hot days per year, effectively adding an entirely new season of extreme heat,” the UCLA study said.

The pain will be especially bad in inland areas where parks, golf courses and cemeteries need lots of water to stay green. 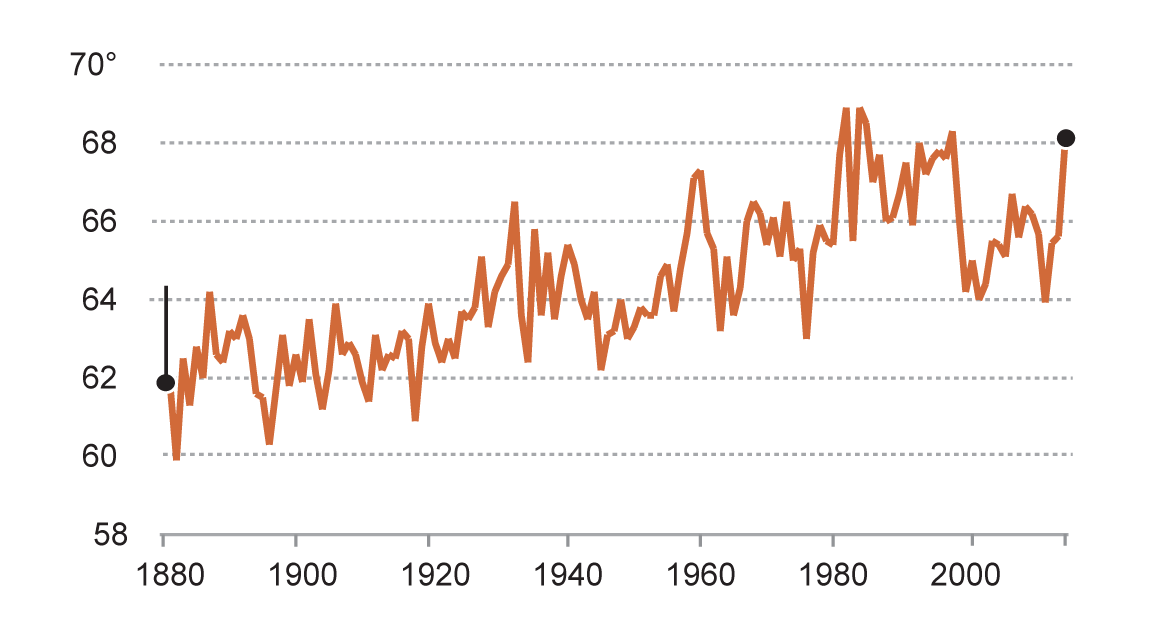 “We know that most residential water use in Southern California is for irrigating landscapes and lawns. During a drought, high temperatures drive up the thirst of plants” used in that landscaping, said Henry McCann, the lead author of the UCLA Luskin report, which is part of a larger report on the vulnerabilities of the drinking water supply system in Los Angeles County.

“Are there going to be more extreme days? There’s no doubt about it,” he said.

“We’re definitely living in a warmer world. At the end of the 19th century, carbon dioxide was 280 parts per million in the atmosphere. And just recently we’ve hit 400 ppm,” Patzert said. “Carbon dioxide hasn’t been this high in 3 million years.”

Exacerbating the issue is the heat effect caused by urbanization — ripping out natural landscape for more shopping centers, streets and black-topped roofs, the perfect color for absorbing more heat into the city, Patzert said.

Even worse, Patzert said, unless efforts are made to control greenhouse gas emissions, the extreme heat will create a vicious cycle: heat causing more demand for air conditioning, drawing electricity coming from coal-fired power plants that spew more heat-trapping gases into the air. And Los Angeles can’t afford to deal with a thirstier landscape, Patzert said, as population grows.

“So you’ve got increasing population, increasing greenhouse gases, more extreme heat days, higher energy demands — so the whole thing snowballs,” he said. “That’s an appropriate term because there’s no snow,” he said, referring the disappearing snowpack in the Sierra Nevada.

Although climate change is inevitable, curbing the use of greenhouse gases will moderate the extreme forecasted heat, according to the study.

For instance, downtown Los Angeles would face only 15 days of extreme heat by 2100 under an aggressive reduction of greenhouse gases, instead of 54 if nothing is done to curb their use.

“The most important message we want to convey is that it really depends on each scenario we choose — whether we keep on putting carbon dioxide in the air,” said Fengpeng Sun, the lead author of the UCLA study published in the Journal of Climate. “We should probably prefer new energy, like solar or wind, and try to be not be so addicted to gasoline.”

Rong-Gong Lin II is a Metro reporter based in San Francisco who specializes in covering statewide earthquake safety issues and the COVID-19 pandemic. The Bay Area native is a graduate of UC Berkeley and started at the Los Angeles Times in 2004.