The death of Kathryn Steinle, who was fatally shot on July 1 while strolling on San Francisco's Embarcadero, was a tragedy. And when the suspect was revealed to be a Mexican national with a criminal record who had been deported several times, it became a flash point in the long-divisive political debate about how to reform the nation's immigration system.

Now Steinle's parents are pushing for changes, and the House of Representatives has passed legislation that would restrict federal funds for cities such as San Francisco that refuse to comply with federal immigration laws.

Here's a look at the situation.

Who was Kathryn Steinle? 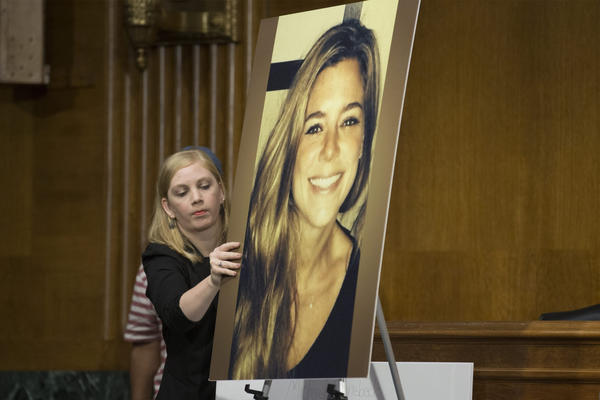 Kathryn Steinle, 32, was thriving in her career in medical sales and had fallen in love with a young lawyer whom she wanted to marry.

Steinle had recently moved in with her boyfriend in San Francisco and had a job with the Mountain View medical device company Medtronic. She was volunteering with an organization called Challenged Athletes Foundation in San Diego, which helps athletes with disabilities reach their goals.

"She was finally at a place where she really had what she wanted," said Rebecca Weinrib, one of her closest friends. "What kills me is that she was just on the cusp of everything she had ever wanted when she was shot."

Steinle grew up in Pleasanton, Calif., and earned a degree in communications from Cal Poly San Luis Obispo. Family and friends described her as an adventurous person who enjoyed traveling and had visited South Africa, Barcelona and Dubai.

Who is Juan Francisco Lopez-Sanchez? 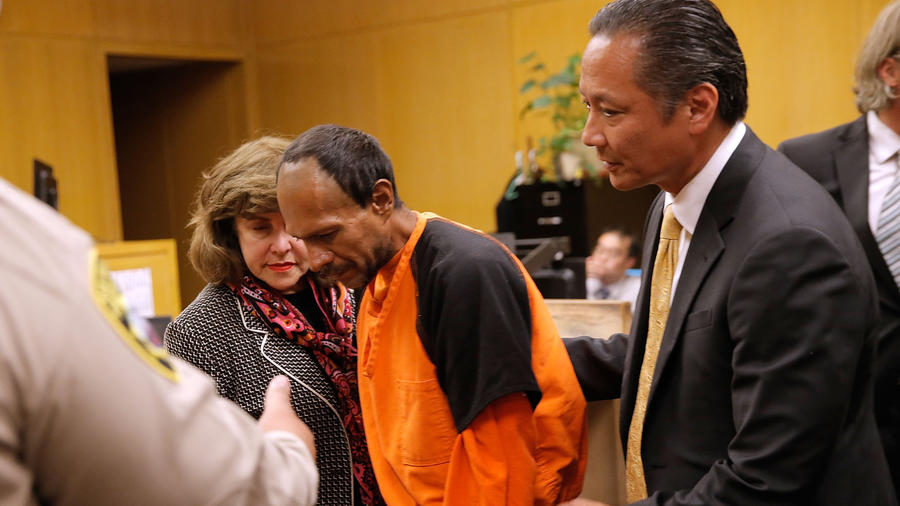 Juan Francisco Lopez-Sanchez is led from a courtroom in San Francisco. (Getty Images)

Lopez-Sanchez, 45, is the man charged with murder in Steinle's death. He has pleaded not guilty.

A Mexican national who is in the country illegally, he has told news media that he was in San Francisco seeking work — a restaurant, landscaping or construction job. In a KGO-TV interview from jail after Steinle's death, he indicated that he went to San Francisco in part because of its liberal laws that made it easier for immigrants without documents to fly under the radar. Read more

Before his arrest, Lopez-Sanchez had been convicted of seven felonies and been deported five times. His felonies and deportations were mostly for narcotics charges, Immigration and Customs Enforcement officials confirmed.

He had no violent crimes on his record, at least in recent years.

What happened on the Embarcadero?

Steinle was strolling arm-in-arm with her father, Jim Steinle, on Pier 14 the evening of July 1. Shots rang out, and a bullet hit her in the back, according to prosecutors. She was pronounced dead at a hospital shortly thereafter.

Lopez-Sanchez told KGO-TV that he found a gun wrapped in a T-shirt on the ground near a bench that evening and that it accidentally fired three times when he touched it. He said he kicked the gun off the pier and walked away, unaware anyone had been shot.

The weapon turned out to have been stolen from a U.S. Bureau of Land Management vehicle.

Lopez-Sanchez is now in custody. He pleaded not guilty July 7 to one count of murder with firearms enhancements. His attorneys contend the shooting was accidental.

How was Lopez-Sanchez walking around freely in the U.S.? 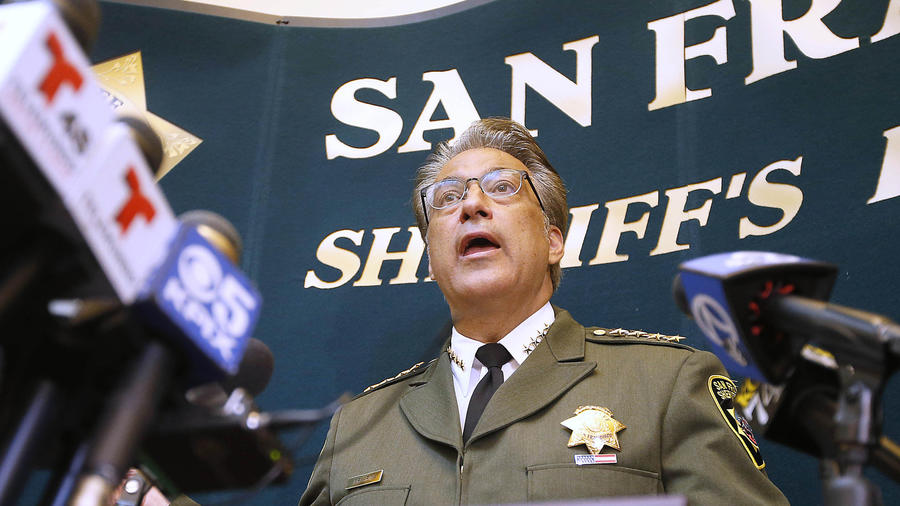 This is where the case gets more complicated, with immigration officials pointing fingers at the San Francisco sheriff and the sheriff pointing right back.

Sanchez was in federal prison for re-entering the country after his fifth deportation. But on March 26, as the date neared for him to be released into ICE custody, prison officials in Victorville shipped him north to the San Francisco Sheriff's Department on an outstanding drug-related warrant despite an immigration detainer. The San Francisco district attorney's office declined to prosecute what authorities said was a decade-old marijuana possession case, and Sanchez was released April 15.

Immigration officials issued another detainer after Lopez-Sanchez arrived in San Francisco, requesting to be notified before his release so arrangements could be made to take custody, ICE spokeswoman Virginia Kice said.

"The detainer was not honored," Kice said in a statement.

San Francisco, as a sanctuary city, honors immigration holds only if the person has a violent record or if a judge had vetted the hold or approved a warrant. In this case, ICE did not seek a court order, Sheriff Ross Mirkarimi said.

Under California's 2014 Trust Act, Lopez-Sanchez could have been held for immigration based on his past felonies.

About 300 cities and counties, including San Francisco, do not honor requests from ICE to keep someone in a local jail until immigration officials can take the person into custody. Recent court decisions have said that such requests violate an individual's constitutional right to due process and that local jurisdictions could be held liable for wrongful imprisonment.

Wait, what is a sanctuary city?

Many cities have scaled back their cooperation with immigration officials, but only about a dozen tout themselves as "sanctuary cities," with the stated intent to shelter people who are in the country illegally.

San Francisco has worn the term as a badge of honor since 1989, but city officials strengthened the stance in 2013 with its Due Process for All ordinance. The ordinance declared local authorities could not hold immigrants for immigration officials if they had no violent felonies on their records or current charges.

"Sanctuary" is a religious term that churches have used throughout history to describe a place of protection and peace. Some churches have also used the term to protect immigrants from deportation.

What are the arguments for sanctuary? 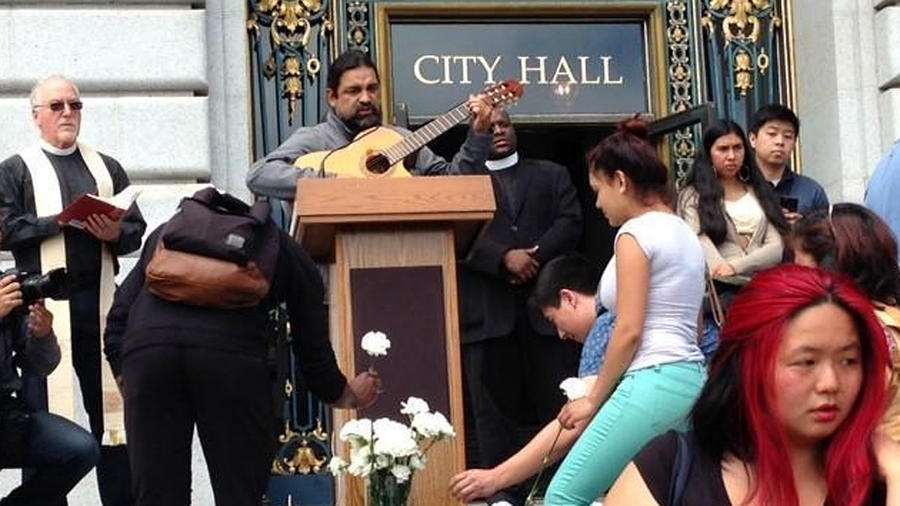 People who are in the U.S. illegally often live in the shadows, fearful of police and other authorities, creating situations where crime, drugs, domestic violence and other problems can run rampant. San Francisco's Sheriff Mirkarimi and Mayor Ed Lee have defended the city's sanctuary laws as a way to fight crime and promote trust, enabling immigrants to cooperate with police, report crimes and serve as witnesses.

Bill Ong Hing, a professor at the University of San Francisco School of Law who specializes in immigration policy, said July 14 that he felt the loss of Steinle, having two daughters himself. But, he said, "San Francisco is a safer place now because of the Due Process for All ordinance. It's safer because the immigrant community trusts the Police Department."

What are the arguments against sanctuary?

Opponents of sanctuary laws argue that by refusing to consider immigration status or to work with federal officials, local authorities are risking letting more felons like Lopez-Sanchez fall through the cracks. They argue that entering the country illegally or overstaying a visa is a crime and that people who commit that crime should be deported.

Some of the biggest proponents of sanctuary are in California. Of the 230,000 detainers that immigration authorities issued over the last 21 months, local law enforcement agencies nationwide failed to honor 17,000 of them. Some 61% of those failures were in California, according to the Associated Press.

What's the response from politicians who favor stricter immigration policies? 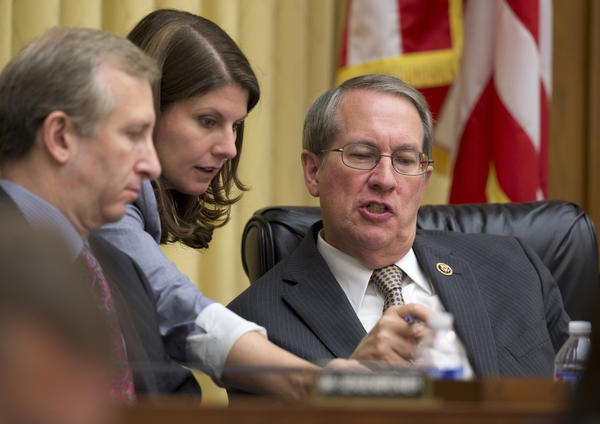 Both Republicans and Democrats criticized San Francisco in the wake of Steinle's death, which reinvigorated calls for stricter immigration enforcement. Several presidential candidates — starting with Republican candidate Donald Trump and then Democratic candidate Hillary Clinton — used the death to take a strong stance.

In the aftermath of Steinle's death, Rep. Bob Goodlatte, the Virginia Republican who chairs the House Judiciary Committee, blamed sanctuary practices and the Obama administration. "The tragic murder of Kate Steinle once again underscores the need to end these reckless policies," he said at a hearing. Read more

Sen. Dianne Feinstein (D-Calif.), who as mayor of San Francisco had supported policies protecting immigrants who were in the country illegally, also issued a rebuke. She said at a hearing that Sanchez's criminal record shows "the failure of the system." Read more 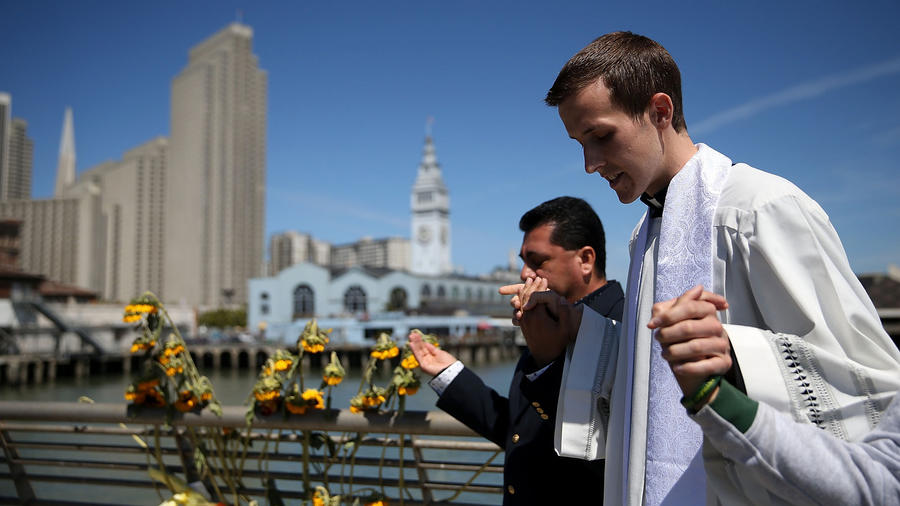 Father Cameron Faller, right, associate pastor at the Church of the Epiphany, and Julio Escobar of the Archdiocese of San Francisco Restorative Justice Ministry, conduct a prayer service at the site where Kathryn Steinle was killed. (Justin Sullivan / Getty Images)

Several prayer vigils have been held on the Embarcadero where Steinle died. Immigration activists have also held events to honor Steinle but have called for "sober" dialogue. Read more

Roman Catholic Archbishop Salvatore J. Cordileone said Steinle's death should not be used as a justification to malign immigrants in the U.S. He urged local and federal officials not to "punish all immigrants for the transgressions of a small minority." Read more

What has happened since Steinle's death?

The House passed the Enforce the Law for Sanctuary Cities Act on Thursday on a largely party-line vote, 241-179. The bill would cut federal funding for local governments that do not comply with federal immigration laws by reporting people in the country illegally or that prohibit law enforcement officials from asking about immigration status. It now goes to the Senate. Read more

Sen. Charles E. Grassley (R-Iowa) has introduced similar legislation targeting sanctuary jurisdictions. His bill also mandates five-year prison terms for those who return to the U.S. illegally after being deported.

Jim Steinle, Kathryn Steinle's father, testified before the Senate and House judiciary committees this week in favor of such laws. Read more

Feinstein has urged San Francisco's mayor to join the Department of Homeland Security's new initiative, the Priority Enforcement Program, which asks local law enforcement to notify ICE officials 48 hours before the release of a person flagged for possible deportation. The program replaces the widely reviled Secure Communities program, under which inmates were routinely held beyond their release date until ICE agents could pick them up.

Given conflicts between federal immigration officials, local laws and 4th Amendment questions over immigration holds, Mirkarimi proposed an administrative law judge might be able to determine the legality of future holds.

Los Angeles County Sheriff Jim McDonnell is weighing his department's cooperation with ICE's requests. He is expected to inform the county Board of Supervisors of his decision in August. 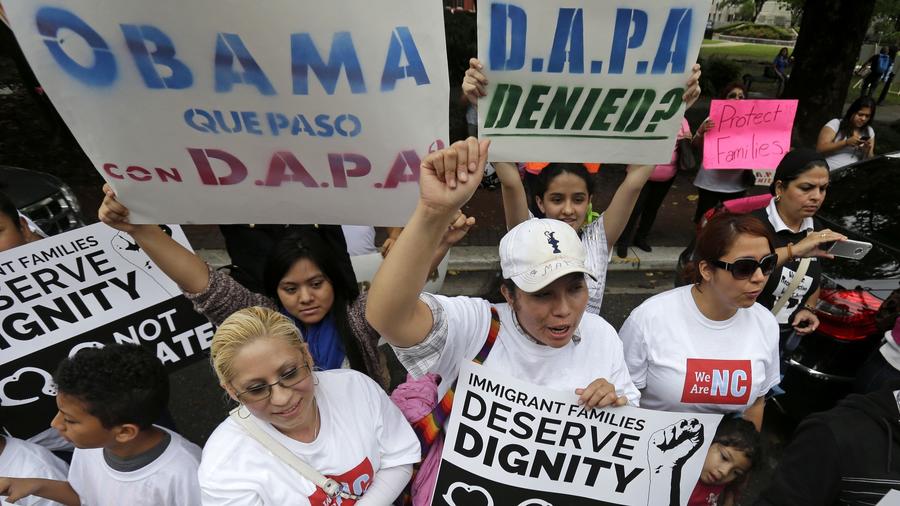 Demonstrators outside the U.S. Court of Appeals in New Orleans show support in April for programs that would shield millions of people from deportation. (Gerald Herbert / Associated Press)

The U.S. Senate, while still under Democratic control, passed a comprehensive immigration reform bill in 2013. The House did not pick it up.

President Obama took executive action in November to shield up to 5 million immigrants from deportation, mostly those who arrived in the United States as children and the parents of U.S. citizens. Texas officials, joined by 25 other states, filed suit in December. The U.S. 5th Circuit Court of Appeals in New Orleans upheld an injunction stalling the executive action in May, and it heard arguments in the case in July. Read more