But California high schools still have a long way to go before they match Iowa, which led the country with a 90.5% graduation rate in 2013-14.

There are a few differences that explain the gap.

One reason is simple: money.

The top 10-15 states on the list, said John Rogers, education professor and director of UCLA’s Institute for Democracy, Education, and Access, spend the most on education — so it would make sense that more of their students graduate. “They tend to be states with low levels of poverty and lower levels of English learners,” Rogers said.

But that doesn’t explain everything, because California also lags behind Texas, a state with a high number of English learners which achieved an 88.3% graduation rate. And the difference in spending per pupil between Iowa and California was just over $1,100 in fiscal year 2013, according to census data.

Some states have been able to better integrate immigrant students — particularly those who move to the U.S. later in their lives — into K-12 classrooms and help them reach college, Rogers said. California schools face several barriers to helping those students as effectively as other states.

For example, California has consistently had one of the highest ratios of students to teachers, particularly at the high school level. And with crowded classrooms, students get less individualized instruction. “With smaller classrooms, there’s more opportunities to interact and use their language,” he said. “You would want to have highly trained teachers that understand how to connect the student’s home language and bridge it into instruction in English.”

Contributing factors to California’s lower graduation rate might occur at a local level, says Tyrone Howard, a UCLA professor of education. “Our biggest districts have gone through different challenges” than those in other states, he said, specifically citing the churn of high-level leaders. 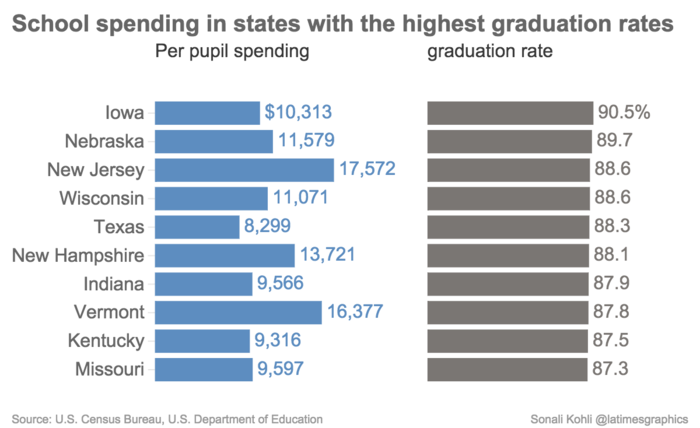 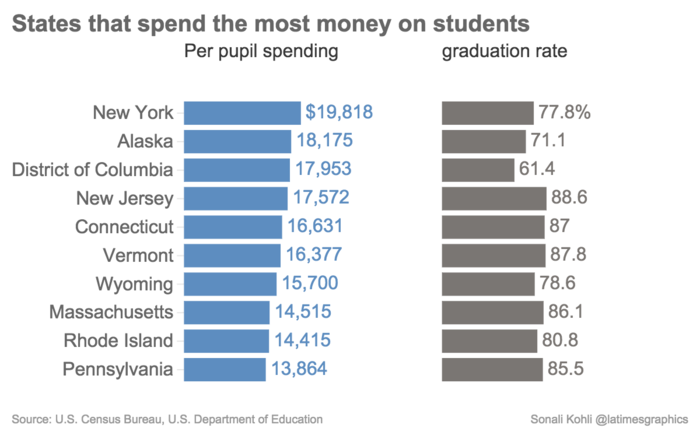 And support for English language learners, Howard said, varies dramatically from one district to the next. “When you add in student mobility within the same state, you find a variability of the quality of programs,” he said.

It’s hard to know exactly what’s going on with the numbers, Howard said. “We gotta dig deep to figure out what’s at play.”

Despite the gap, Tom Torlakson, California’s state superintendent of public instruction, hailed California's upward movement in a statement. "California’s record-high graduation rates are another sign that we are making important progress toward our goal of making all students college and career ready in the 21st century,” he said.

Sonali Kohli is on leave from the L.A. Times until June 2021, completing the Spencer Education Journalism Fellowship at Columbia University. A product of Southern California, she grew up in Diamond Bar and graduated from UCLA. She worked as a metro reporter for the Orange County Register and as a reporter covering education and diversity for Quartz before joining The Times in 2015.

Joy Resmovits is a former staff writer for the Los Angeles Times.