UC Riverside invokes #Mizzou during a march for free tuition

On Thursday at noon, about 100 protesters at UC Riverside joined students at campuses across the nation in a demonstration called the “Million Student March.”

Students held signs reflecting their demands, which were announced in an October article in the Highlander, UCR’s campus newspaper: raise the wage of all campus workers to $15, cancel current student debt and grant free tuition for all students.

But many students also held signs expressing support for students at the University of Missouri, where black students had expressed fear for their safety after threats of violence were posted on social media. One Missouri man was arrested on suspicion of making a terrorist threat. 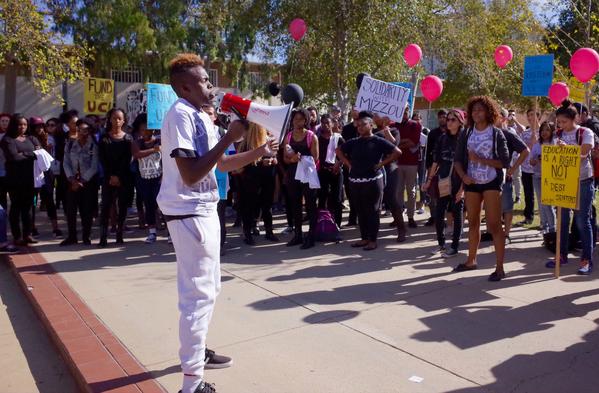 Hussein’s statements echoed the #BlackOnCampus hashtag, which had emerged on Twitter the day before. #BlackOnCampus, which continued to trend during the nationwide protests, anchored a collection of stories similar to Hussein’s: People posted about being forced to show ID to police who thought they were trespassing on campus, or having fellow students assume that they only got into school because of affirmative action.

Democratic presidential candidate Bernie Sanders also tweeted about the hashtag, saying that it is “time to address structural racism on college campuses."

The march made a stop in front of the campus financial aid office, where students held an open conversation about the rising costs of college. The UC Riverside site lists annual tuition and fees as $15,703 for California residents, and nearly $40,000 for nonresidents. “I’m already $10,000 in debt,” one participant said into a megaphone. “And I’m one of the lucky ones.”

Many students also felt that they were being asked to shoulder too much of the burden of school fees. In the past, the state government had provided more funding to schools, but this has changed in recent years. A recent study published in the Chronicle of Higher Education showed that in in 1987, UC Riverside received 66.6% of its revenues from state funding. Twenty-five years later, in 2012, that number had halved to 33%. 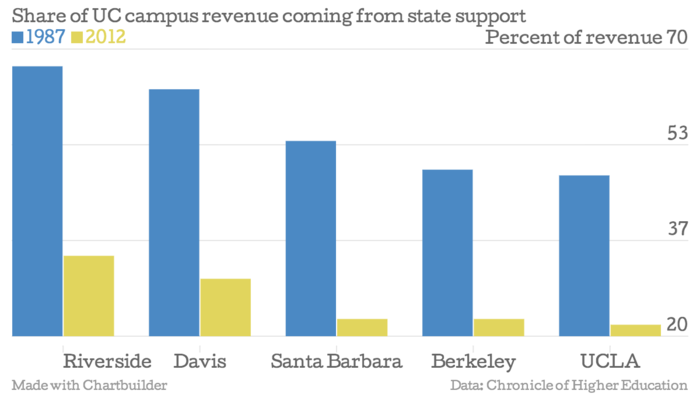 Nov. 13, 11:35 a.m.: In a previous version of this article, a student was quoted as suggesting that tuition was raised this year. The University of California has not increased undergraduate tuition since 2010, and it is not scheduled to increase again until the 2017-2018 academic year.

This spring, Gov. Jerry Brown and University of California President Janet Napolitano came to an agreement that, among other things, raised state funding for UC and froze tuition for another two years. According to UC officials, the tuition hike, in 2017-18, will be “pegged to the inflation rate,” and capped at 5%.

The topics of tuition and student debt were also a concern for community members who were not directly affiliated with the university but joined the march nonetheless.

“Coming back into the school system is such a challenge for veterans,” said Lee Haywood, who served in the U.S. military and hopes to begin school at UC Riverside in September. Haywood said he had attended the protest because he wanted to hear from students about what it’s like to face increasing debts. “I want to know what I’m coming in to,” he said.

The protesters included graduate and undergraduate students, as well as faculty. Other campuses in California also had similar rallies, some with many more participants. At Claremont McKenna College, students protested over racial bias, leading to the dean of students' resignation.

On Twitter, the #MillionStudentMarch hashtag trended almost immediately Thursday morning. Reactions were mixed – many tweets were students livetweeting pictures or quotes from campus. Others mocked the protests, and called participants “overly emotional” or “brainwashed.”

Some negative reactions were stronger. One Twitter user used the #MillionStudentMarch and #Mizzou hashtags to circulate a picture of a Smith & Wesson handgun. “Hey wussies […] here’s my microaggression. My trigger words have real triggers.”

Several students said that watching the events in Missouri, where protesters contributed to university system President Tim Wolfe’s resignation Monday, made the goals of the Million Student March seem more tangible. Hearing the news about the early successes of protesters at in Missouri was “encouraging,” said Harkirat K. Mundi, a first-year psychology major. “If there are no results, it’s discouraging, and nobody knows what to do,” she said.

After an hourlong march, Hussein once again held a megaphone and asked the students to hold hands as he led them in a chant. “It is our duty to fight for our freedom,” he began, pausing to let the other protesters echo him.