Hi there. I'm Kari Howard, and I edit the Great Reads (aka Column Ones) for the Los Angeles Times.

Two of my biggest loves are narrative journalism and music, and I'm lucky that my days are filled with both: When reading the stories, I get inspired by songs I think fit the article's theme — a soundtrack.

Here are some Great Reads of the past week, plus their soundtracks.

What if you combined 'Easy Rider' and 'Argo'?

They were hippie brothers, growing up in Orange County in the 1960s, drifting into drug dealing. When Scott Stevenson was still a teenager, he came up with an outlandish idea: He and his brother Ron would make a film in Morocco as a front to cover up their real business: filling VW buses with hundreds of pounds of hashish, and smuggling it out of the country. And it worked! The caper might seem hard to believe if everyone involved weren't so willing to admit their roles in the caper now, more than 40 years later. "I did what I did, and I'm not ashamed of it," one member of the ring said. "That wasn't no big thing." I absolutely love this Daniel Miller story. Doesn't it read like a movie?

Scott Stevenson in Ketama, Morocco, in 1973, purportedly wrapping hashish in plastic to prepare it for transportation. (Erika Linn)

The soundtrack: "Medina," by Rachid Taha. I'm only a casual fan of rai music, but Rachid Taha is my favorite. (During the Iraq war, I listened to "Barra Barra" all the time while editing stories.)

The art of getting the lower hand

One thing I love about the Great Reads/Column Ones: They can reveal something cool that's right next door, and you never knew about it. A classic example is Sarah Parvini's story about ta'arof, the extreme sport that is the Persian art of etiquette. Who wouldn't want to read a story that starts this way? "The Battle of the $18 Ice Cream Bill had a certain 'Game of Thrones' quality to it." Or the description of the battle over who pays that bill? "With his arm still wrapped around his friend's chest, he presented his own credit card. Take this! But the first man wouldn't yield so easily, and boxed out his rival. Then the two men crashed into the table where the cash register rested, breaking one of its legs." In a culture that emphasizes deference, she writes, ta'arof is a verbal dance — or fight, as the case may be — that circles around respect. 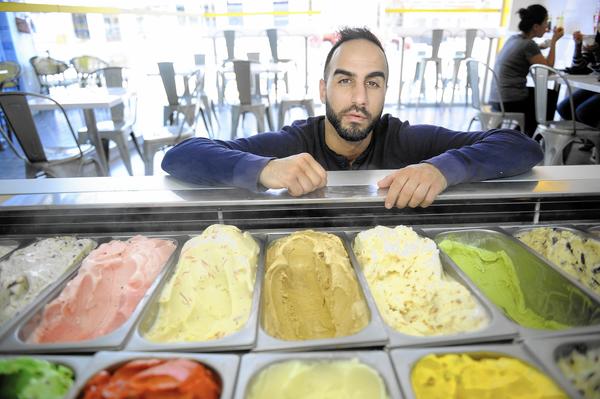 Farbod Papen, owner of Saffron and Rose Ice Cream in Westwood, says he sees ta'arofing all the time in his store. (Christina House / For The Times)

The soundtrack: "A Little Respect," by Erasure. I'm a bigger fan of Vince Clarke's previous band, Yazoo (or Yaz, as we Americans were forced to call them because of a legal issue). But it's a great song.

A bus station for commuters between two hells

It looks like any other dusty satellite bus station in Syria, unremarkable in all outward aspects, a collection of corrugated metal and cinder-block shacks housing various transportation franchises. But every day, the station hosts a behavioral transformation as travelers cross front lines both strategic and social, military and emotional. It's a place where seemingly straightforward conversations veer into the realm of the unfathomable. The psychological horror of the last section of the story, kind of a double-edged "Sophie's Choice," will stay with me for a long time. 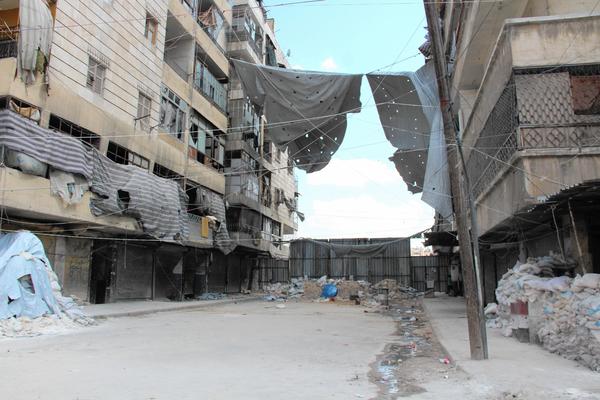 Curtains, meant to deter the ubiquitous snipers along the so-called Passageway of Death, hang between buildings in Aleppo, Syria. (Nabih Bulos / For The Times)

The soundtrack: "A Wolf at the Door," by Radiohead. When the Syrian conflict started and I was editing Raja Abdulrahim's stunning dispatches from the rebel side, I started listening to Radiohead (specifically, the song "Talk Show Host," which fit the story I was reading at the time). Then it became kind of a tradition — a war soundtrack.

Scientists. With Guns. Trying to save the rainforest.

Thought I'd go for the movie-pitch version of the story there. Vincent Bevins went on a "ride-along" with the Brazilian scientists who fan out across that vast country in 4x4 trucks and helicopters. Part detectives, part environmental special forces, they're on the hunt for the ranchers and farmers who illegally destroy almost 2,000 square miles of Brazilian rain forest a year. Bevins really puts us there: "They send the chopper off and head up a road, sweating and panting. Some keep their weapons drawn at all times and remain as quiet as possible. But it's easy to not be heard here because the sounds of birds, insects and other creatures combine into a constant roar. Then they stop. 'Can you hear that?' one of them asks. 'It's a chain saw.' " 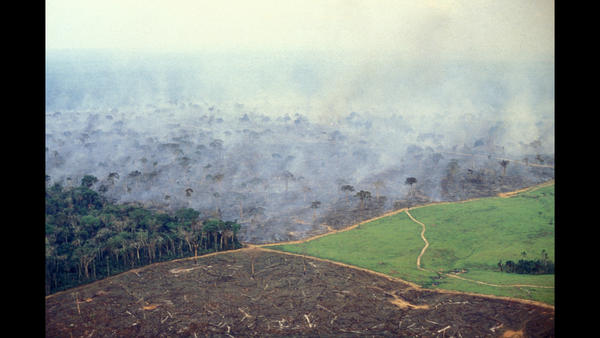 An aerial view shows four stages in land management on a farm in the Amazon: A wedge of natural forest. To its right, a swath of forest being burned. Left foreground, land cleared by burning. Right, a pasture for cattle. (Brazil Photos / LightRocket)

The soundtrack: "The Trees," by Pulp. One of my favorite bands — and one of my biggest music crushes: lead singer Jarvis Cocker. If you haven't seen the documentary about the band, "Pulp: A Film About Life, Death & Supermarkets," I recommend it. At a showing at the glam Ace Theatre in DTLA with Cocker in attendance, I learned that I wasn't alone in my crush.

"LA's most important buildings are its freeways." Not sure I agree with that, but it's a fascinating point of view from the Guardian in its study of the famous four-level interchange near downtown. One UCLA professor likens its iconic status to that of the building in Hollywood and LAX's Theme Building, "mid-century projects that were the physical representations of the emerging southern California industries of entertainment and aerospace. The freeways symbolized another important industrial force: suburbanization."

A friend on Twitter posted about a cool program they have going on in London: Poems on the Underground. They put beautiful poems on the walls of trains to comfort weary commuters. Isn't that great? The one he posted was "When You Are Old," by W.B. Yeats. One of the lines in it has always resonated with me: "But one man loved the pilgrim soul in you/And loved the sorrows of your changing face." Yeats is one of my favorites, so I'm rereading him.

What's on my bedside table

Last weekend at the swap meet, I got a box of letters that a Glendale man sent to his wife from hotels across America in the 1930s and '40s. I was initially drawn in by the hotel logos on the envelopes (Example: "Hotel Del Mar — Southern California's Ideal Paradise for Your Vacation or Weekend," complete with a drawing of a couple lounging at the beach, fluffy clouds and a sailboat on the horizon). But mostly I was hoping I'd eavesdrop on this man and woman, and find out what they meant to each other over the years. (OK, I was hoping for a great love story. Or maybe a mystery: Why all the hotels?)

What's on my turntable

Although I spend most of my time listening with headphones to , sometimes I want to hear the needle touching down on vinyl. That's why I have a turntable in my office — and two at home (one inside, and a battery-powered one outside when the weather's fine — which it usually is in Southern California). This week's vinyl: "I Wish You Love," by Gloria Lynne. I love this album for the cover alone. But her timing on the title track is wonderful.

Want to chat? Have a great idea for a Great Read? I'm @karihow on Twitter and kari.howard@latimes.com on email.