What’s left of Seneca is for sale, but there wasn’t much interest until the ad took off. It’s still waiting for a serious offer. 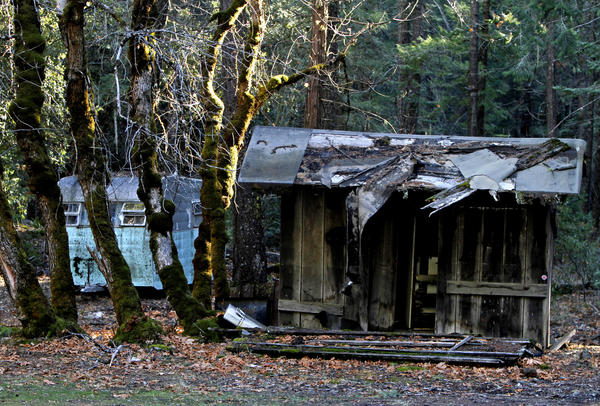 The road to this abandoned gold mining town is six miles long, mostly dirt and gravel, snaking along a ridge hundreds of feet above the north fork of the Feather River.

Bill Davies takes the turns slowly in his pickup; a wrong twist of the wheel has sent less careful drivers sliding off the road. There's no snow or rain, but even clear days require cautious preparation, and Davies has brought a chain saw just in case strong winds have toppled any pines or cedars onto his path.

His dog, a mutt named Tom Tom he found abandoned, runs alongside as his truck passes patches of trees charred in last year's forest fire. Up ahead, a sign warning of rock slides is pocked with bullet holes.

The road ends in a clearing, where a plaque declares that "gold was found in 1851 and a wild mining town was born," with a nearby post office, hotel, blacksmith and a steady supply of gold-hungry miners.

These days, it's home to three dilapidated cabins, some sheds, a few old motor homes and a weathered bar called the Gin Mill, where for nearly six decades a tiny woman named Marie Sabin served up ice-cold beers chilled in a propane-powered refrigerator.

Outside the bar's front door, the wall is blanketed with business cards tacked up by visitors from as far away as Long Beach. A sign in the window says the bar is open, but there's no one around.

Davies, who grew up nearby in Northern California's mining country, loves the Gin Mill as much as any nondrinking man could possibly love a bar.

Now the bar and the surrounding 10 acres are for sale. A catchy Craigslist ad for the property has ricocheted across the Internet, piquing the interest of locals and "flatlanders" far from the Plumas National Forest. Inquiries have poured in from around the state, the country and as far away as Europe.

"Want to buy a ghost town with a bar?" the ad says. "Expand it into a unique getaway!"

Sure, there's also no electricity, no telephone line and no running water. It's more than three hours north of Sacramento. Although the property is listed for $225,000, a new owner would probably have to dump in thousands more to make the cabins habitable.

But what the place lacks in comfort and accessibility, it makes up for with a colorful history stretching from the Gold Rush of the 1850s to the desperate days of the Great Depression to music festivals in the 1970s.

The allure of owning a remote slice of California that's in no rush to shake off its rugged past has attracted all sorts, to the amusement of locals.

Marilyn Morris Quadrio, director of a nearby museum, says she was walking around Seneca with a friend when a man and woman pulled up in a shiny black Chrysler. They were from Sacramento and had seen the Craigslist ad.

The woman wore red velvet flats as she walked along the forest floor.

"It looked like they shopped at Nordstrom's, or at least Macy's," Morris Quadrio recalled. "This is L.L. Bean and Levi country up here."

Two other men managed to tow a camping trailer down to the bar and were surprised to find that Seneca really is a ghost town, and not the tourist-attraction sort. Deciding it was too cold and lonely to spend the night there, they ended up renting a room at the nearby Hideaway Motel and Lodge.

"They were so disappointed," said Bink Huddleston, the lodge's owner. "It was just comical."

Huddleston suspects there's still gold somewhere in Seneca and recalls seeing miners with nuggets in their pockets and pistols on their belts at the bar as recently as the '90s.

"People don't have any business messing around down there," he said.

Seneca has a history of attracting a rougher breed. Hundreds of miners poured into the area after gold was discovered in the 1850s. Years after they cleared out, a new crop arrived during the Great Depression, when hunting for gold was easier than hunting for a job.

Morris Quadrio remembers a childhood teacher telling her that when things didn't work out, miners would sometimes commit suicide with dynamite. The teacher, who moved to the area when his father lost his contracting business in Oakland, said he once found the bones of a miner when he was a boy.

These days the area can fill up in the summer as visitors flock to Lake Almanor, but far fewer people decide to put down roots.

"The people who choose to live up here are making a conscious choice not to keep up with the Joneses," Morris Quadrio said. "They treasure the nature, the peace and quiet."

Today the property is owned by two friends, Tim Ten Brink of Susanville and Jerry Manpearl of Santa Monica, who happened to swing by the bar while on a hunting trip in the 1970s.

They were drinking 35-cent beers and 50-cent bourbon-and-waters when someone mentioned that the place was for sale. They bought it for roughly $60,000.

"Was it the brightest investment we could have made?" Ten Brink said. "Probably not."

Soon after buying the place, they organized music festivals on the property. During the fourth and final year, they said, thousands of people showed up, including hippies who bathed naked in the river.

"The newspapers were calling us 'Woodstock West,'" said Manpearl, 70.

Although Ten Brink and Manpearl own the place, locals consider Seneca to be synonymous with bartender Sabin, who died in 1996.

Less than 5 feet tall, she could barely see over the bar, Davies recalled. She knitted angora Christmas socks for children and faced down a long line of local drunks, including her husband, Don, whom she refused to serve.

"Don would walk in," Davies said. "Marie would give him that look. He would turn around and leave."

Marie is called the "Guardian Angel of Seneca" on the plaque, which is mounted on a rock next to the bar. Many of the plaque's other statements are probably exaggerated, said Morris Quadrio, including claims that 500 Chinese miners once toiled away in Seneca, or that it was home to an opium den.

Manpearl and Ten Brink started talking about selling the place a few years ago but never had any luck. After Sabin died, Ten Brink opened the bar much less frequently, and he hasn't been to Seneca in the last few years as his health has declined.

Jeff Potter, a nephew of Ten Brink who lives in Michigan, said it seemed like "nobody wanted to list it or to promote any listing." So Potter wrote up an ad on Craigslist earlier this year.

The posting languished until this fall, when it suddenly entered the social media bloodstream. News websites including the Huffington Post wrote about Seneca, and Pee-wee Herman tweeted a link to the ad.

"The dam broke," Potter said, and now they're considering holding an online auction.

Late last month, Manpearl and his wife, Jan Goodman, held an open house on the property in an effort to lure potential buyers. They flew from Los Angeles to Reno, rented an RV and drove to Seneca. Fall was threatening to turn to winter as ice crystals clung to fallen leaves, and the Feather River noisily rushed over rocks and under fallen branches.

The couple opened the Gin Mill, chilled some beer and offered nuts in plastic cups. Manpearl, perhaps remembering that he decided to buy the property after a few drinks four decades ago, placed bottles of liquor on the bar and encouraged people to help themselves.

One visitor, Steve Garcia, made the roughly 10-hour drive from Orange County with his fiancee after seeing the online chatter about Seneca.

Garcia, a 46-year-old bar manager in Costa Mesa, said Seneca's remoteness is a perk, not a barrier, and he's discussed making an offer on the property.

"I like the idea of being off the grid," he said. "I'm up for the challenge. I'm not scared of the outdoors."

Garcia added, "It could be the place we've been dreaming about."

As people hung out on the porch and sipped drinks, Chris Cartwright played the out-of-tune piano and wondered if there was still gold to be found in the area.

Cartwright and his wife, Tawnia, own some nearby resort properties and are considering trying to buy Seneca. They joked about putting in a helipad to allow visitors to skip the dirt road.

"There's lots of history and beauty there that's hard to find," Tawnia said. "It's a place you'll never see anywhere else."