Elsa’s Bakery predates the hipster hangouts in the neighborhood. The new owner is trying to respect its past and appeal to the present. 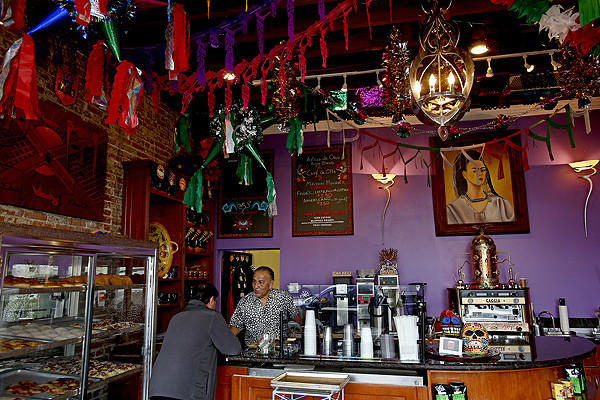 The new owner cleared out the clutter, gave the back wall a coat of lavender paint and hung lithographs by East L.A.-born artist Gronk. But he kept the old name and the old baker -- and the sounds of Spanish in the shop. More photos

Elsa's Bakery predates the hipster hangouts in the neighborhood. The new owner is trying to respect its past and appeal to the present.

A small woman with grocery bags dangling from both forearms peeks through the glass door at Elsa's Bakery in Highland Park. She sees a sign that says "¡Celebrate Pan Dulce!" and a man waving at her from inside.

Edmundo Rodriguez, the bakery's new owner, greets her in Spanish. She squints at a tray of Mexican sweet bread and hums along to Enrique Iglesias' new hit, "Loco." Another song comes on — a popular one by Maná — and she keeps humming.

The bakery's soundtrack is subtle, but it's specific. Spanish only.

When Rodriguez and his son, Mario, took over the York Boulevard bakery from founders Manuel and Elsy Vargas in July, they cleared out the clutter, gave the back wall a coat of lavender paint and hung three black-and-white lithographs by East L.A.-born artist Gronk.

But even as they put their stamp on the bakery, they also wanted to respect its roots, and the couple who built it. So they kept the old name and the old baker, the one who shapes elotitos — the sweet bread named for the ears of corn they resemble — so quickly that it looks like he's dancing.

And they kept the sounds of Spanish.

Like York Boulevard, recently named the coolest street in L.A. by a national magazine, the bakery is caught somewhere between yesterday and tomorrow.

The easy-to-whiz-by strip of auto body shops and mercados has transformed into a mecca of mod. A street of vintage kitsch shops, cute bookstore-adjacent coffeehouses and pedestrian-lifestyle buzzwords like parklet and bike corral. A place where flannel shirt-wearing dads push strollers through a shop that sells a brass flamingo for $295.

For Bob McGibbon, whose auto body shop on the boulevard wears a "Since 1960" sign, this new York means adjusting to the quick turnover among new stores. Mickey Mouse businesses, he calls them. For Cathi Milligan, who runs a glass studio a couple of blocks over, it's hard not to link the declarations of cool with the threat of higher rent.

And for some, the hardest part is adjusting to a different neighborhood — a gentrifying one.

When new businesses open up, a stenciled, spray-painted message occasionally appears on their walls. It reads: "WE ARE NOT A DISPOSABLE COMMUNITY." Some residents use their Wi-Fi Internet log-in names to spotlight the us-versus-them tension. (One that pops up when you log on at coffee shops along York addresses "YOU HIPSTERS," preceded by a four-letter epithet.)

Many newcomers to the area even make nods to the boulevard that once was. The menu at Donut Friend, for example, touts a Gruyere-filled doughnut but also Mexican Coke and Jarritos, a popular Mexican brand of soda. A boutique called Mi Vida sells wood benches that read: "Hecho en Highland Parque." And the neon sign of a scantily clad woman outside craft beer-and-wine bar the Hermosillo is a relic from its cantina days.

But perhaps no place has done more to keep its old customer base than Elsa's. 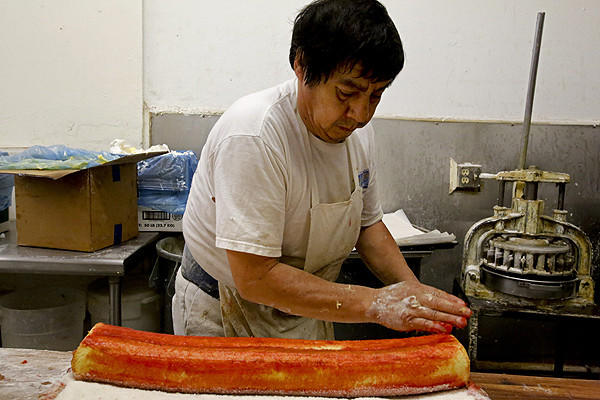 Benjamin Lopez works on pastry in the kitchen. The Vargases hired Lopez more than 30 years ago, and the fact that new owner Edmundo Rodriguez wanted to keep him on was a factor in the couple's decision to sell the business to him. More photos

Keeping the name of the bakery helped, but there was a bigger selling point: Benjamin Lopez, the baker whom Manuel Vargas hired more than three decades ago.

The man who can weigh the perfect amount of salt in his cupped palm. The one who knows to use the bottom of a glass soda bottle to flatten a ball of cookie dough.

See, good pan dulce is a love language. An art. Not a corner worth cutting.

And that's why Highland Park native Julia Ledesma, who worked for the Vargases for more than two decades, has stuck with the bakery through the change.

"It's the same bread," she said. "The same perfect bread."

But still, it's hard for Ledesma not to dwell on what once was — on her first day at the bakery at age 26, on falling in love with a baker she'd later marry, on the way Don Manuel and Doña Elsy became family.

"They were the darlings," she said. "The darlings of the whole neighborhood."

On a recent afternoon, the octogenarians sat down with their eldest daughter, Rosario, and reminisced about the bakery that was their life.

There was the thrill of the bustling wholesale days. The 24-hour operation that trucked bread as far as San Bernardino and helped them land big clients like Albertsons. There were the moms who used Elsa's Bakery as a free baby-sitter and the guy who once sought shelter there when a member of a rival gang was chasing him.

"Oh," Elsy said, a smile spreading across her face. "What about the boy who came back years later to apologize?" 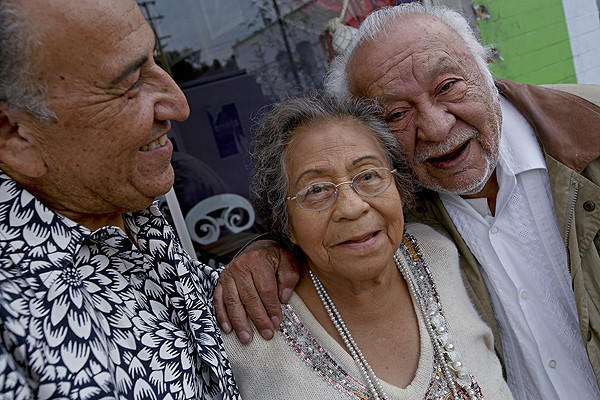 Edmundo Rodriguez, left, new owner of Elsa's Bakery, shares a moment with founders Elsy, 82, and Manuel Vargas, 83. Rodriguez learned about the bakery from the dissertation of one of his students when he was an adjunct professor at UCLA. More photos

The couple showed up one morning, years ago, to a trashed shop. Someone had broken in, eaten some candy, taken a few bites of cake and made off with some coins. They knew who did it, because the little boy had used their label gun to spell out his name. But they never called the police, Manuel said proudly, because he was just a kid.

That was the norm for her parents, Rosario said. They always erred toward grace and generosity.

"People would say, 'Manuel, I don't have money, can I pay you tomorrow?'" she said. "I would even tell him, 'Dad!' Because we knew there was no money coming in."

She took to leaving him notes by the phone reminding him to charge full price.

"Do you think he listened to me?" Rosario said, looking over at her dad. He just smirked and said, "Ayyy, pobrecitos."

The wholesale business was always simple — no computer, no fax, just pencil and paper, she says proudly — but it worked. But then the late '90s came and things got tough. Their big clients ditched them for bigger operations with cheaper prices, and they scrimped by on retail sales. Soon there were fewer familiar faces. New people stuck their heads in sometimes, Rosario said, but they rarely came in.

"We weren't trendy at all," Rosario said. "It's different customers, different people. But they will never have what we had. That era is gone."

Finally, it was time to sell. They weren't ready, but their declining health meant it needed to happen.

They got tons of offers, Rosario said, from people who wanted to open vintage shops and restaurants and other bakeries. But they were all so pushy.

"They came in like, 'I'm gonna do this, I'm gonna do that. You have to rent it to me. York has to improve. Knock this down. Knock that down. Make this that,'" Rosario said, shaking her head.

But Rodriguez, a Mexican immigrant like the elder Vargases, had finesse.

Rodriguez met the Vargases by chance a few years ago when he showed up at the bakery for a fact-checking session of sorts. He was working as an adjunct professor for UCLA's Graduate School of Education & Information Studies, and one of his students who did her doctoral dissertation on pan dulce listed Elsa's pastries as some of the best in L.A. After a taste test, he agreed and started to drop by from time to time for a treat.

So earlier this year, when he realized the Vargases were considering selling the bakery, Rodriguez saw it as an opportunity to open a coffee shop, as he'd long hoped to do, and to keep the bakery alive. He knew balancing the old and the new would be tricky, for the bakery and for the street.

"It's the change of the profile of a community," he said. "While the change is really positive — there is no question — there's a risk to the change. The risk is to lose the identity of the community."

The turning over of keys happened last summer. It was the right decision, the Vargases know, but it still feels like a death of sorts. It's finally getting easier to walk by the renovated bakery — maybe. 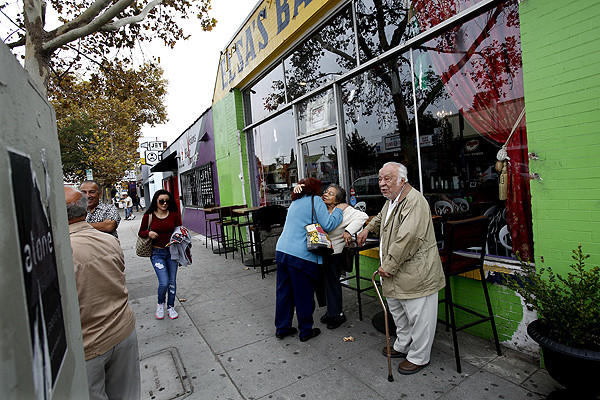 On a recent visit, Elsy and Manuel Vargas greet people outside the bakery they started more than 30 years ago. More photos

When Manuel thinks about it, he throws his head back, closes his eyes and shakes his head.

"All I know," he said, "is that when I die, I want my body to pass through York Boulevard."

For some long-timers, a changing York is a hard swallow. For others, it's exciting.

From his favorite spot on one of the parklet's tiled benches, Raul Gonzalez Rascon, who moved to L.A. in the '70s, takes in a recent morning. He bends down, pulls up the leg of his black slacks and pulls a pack of Marlboro Reds from under his sock. He lights up and watches the wiry woman with an asymmetrical haircut and a pack of American Spirits in hand walk toward him.

"I see different faces now," he says. "People reading and drinking their coffees. And they always have those little computers. I like it."

The woman passes him and smiles and then stops by the piano on the sidewalk in front of 50/50 Art Gallery. She leans down for a closer look at a familiar message stenciled on the wood. This time someone has used a black marker to scribble over two of the words. It now reads:

"WE ARE A COMMUNITY." 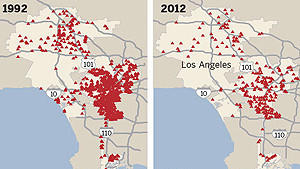 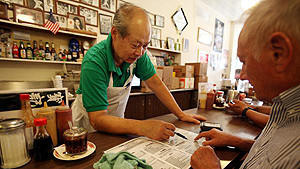 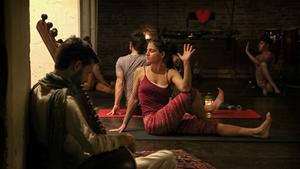