Opinion: Hillary Clinton’s best shot at winning over millennial women? Proving to us she sees the bigger picture.

The New Hampshire primary earlier this week laid bare a potentially damaging weakness for Hillary Clinton – her lack of support among millennial women. In Tuesday’s exit polls, Bernie Sanders won over a stunning 82% of liberal women under 30. That helped him earn 53% of the female vote at large, compared to Clinton’s 46. It also helped him win the primary decisively, by 22 points.

For Clinton, a longtime feminist and the only female candidate left in the presidential race, rejection from young women seems unexpected. Why turn away the one candidate who, by her very identity, represents and advocates for our population?

The Times’ David Horsey suggested in a cartoon and column this week that Clinton is too familiar and not radical enough for young voters:

“These young women adore Bernie because he is honest, idealistic and bravely radical. They are shunning Hillary because, in their eyes, she is devious, boringly pragmatic and as conventional as mom jeans.” 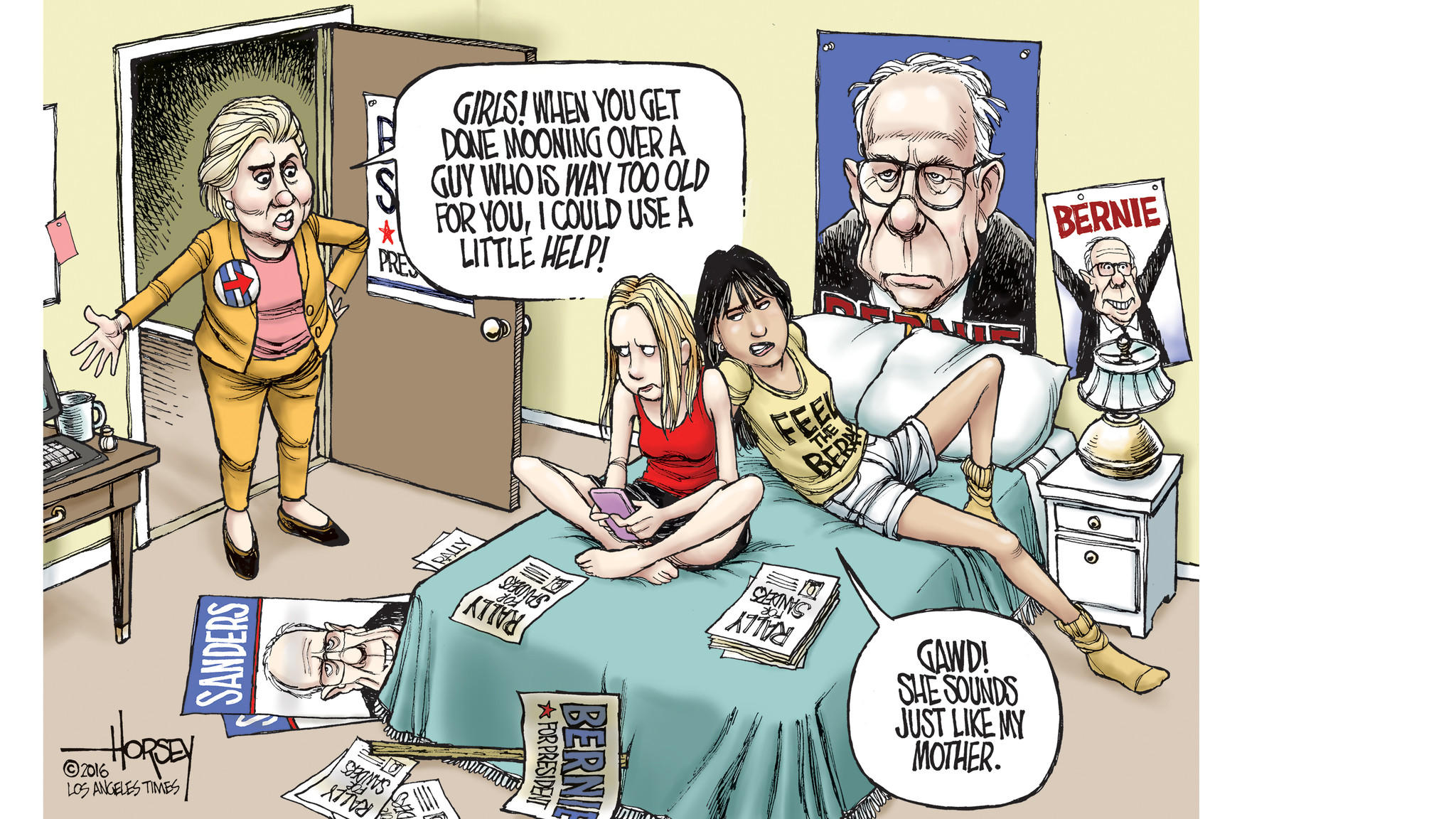 When Politico asked young women to weigh in on Clinton’s problem, many stressed that, increasingly, their demographic isn’t making decisions based on gender:

“To many on the left, then, Clinton’s gender is simply not enough to make her exciting. She doesn’t belong to enough categories of disenfranchised people,” wrote Molly Roberts, a columnist at the Harvard Crimson.

“Women don’t like to be told that they should support Hillary because she’s a woman,” said journalist Elizabeth Drew.

Younger women, who in life have experienced something closer to gender equality than their mothers or grandmothers experienced, arguably don’t see the importance of getting a woman into the White House. As an NPR recap of Thursday’s Democratic debate points out, millennials are put off by Clinton’s tendency to speak with reason rather than vision:

But looking ahead, one strategy Clinton employed in Thursday’s Democratic debate has the potential to be her saving grace: painting Sanders as a one-trick pony. When the two candidates finally dug into a foreign affairs discussion, Clinton stood strong, knocking Sanders for repeatedly nitpicking past issues rather than discussing the bigger picture. When Sanders mentioned Clinton’s Iraq War vote – as he had multiple times previously – Clinton fought back:

"I do not believe a vote in 2002 is a plan to defeat ISIS in 2016," she said. "It's very important we focus on the threats we face today, and that we understand the complicated and dangerous world we are in."

After emphasizing her superior understanding of foreign affairs as a whole, Clinton used her closing statement to make her point even clearer:

Therein lies the argument that could solve Clinton’s problem. Yes, millennials may be disenchanted by Clinton’s pragmatic language. Yes, we are drawn to large-scale changes rather than Clinton’s incremental moves. But, overall, we generally agree with Clinton on one thing: Our country’s issues are complicated, and simplistic solutions won’t cut it.

Clinton is losing the young female vote because she’s viewed as yesterday’s news. Convincing millennials that the world is more complex than Sanders’ enchanting, but ultimately reductive, world-view could be her best shot at showing them (us) she’s relevant.