In Tanzania, a couple joins the animals’ great migration

ARUSHA, Tanzania -- Fire was the last thing my husband, Steve, and I expected on our trip to Tanzania for a 12-day safari. Yet here we were in our Land Cruiser, bouncing along rutted dirt roads through walls of fire.

Our hosts reassuringly explained that these fires were intentionally set by rangers — a necessary evil to keep the Serengeti’s famous grazers nourished and content on land that had been set aside for them. And it worked. In just a few days, the green flash of new grass began to pop through the thin coat of jet-black ashes, enticing the return of wildebeests, zebras, impala and gazelles — and with them, a steady flow of tourism dollars.

Because the animals appeared unfazed by the fires, we set aside our worries and turned our attention to the annual awe-inspiring great migration.

We had decided to limit our travel to Tanzania’s northern circuit and its Tarangire and Lake Manyara national parks, the Ngorongoro Crater and the Serengeti. Every year between June and October, hundreds of thousands of wildebeests and zebras — and wild kingdom hangers-on — traverse the Serengeti and cross the crocodile-infested Grumeti River en route to Kenya in what is known as the great migration. We’ve all seen the National Geographic specials, but there is nothing comparable to witnessing firsthand this incredible spectacle.

Each of our four destinations delivered on the promises of Glendale-based Great Safaris, guidebooks and well-traveled friends. Within 30 minutes of striking out on our first game drive on the fringe of Tarangire National Park, we came within yards of a pride of lions feasting on a freshly killed zebra. We thought the trip couldn’t get any better than that, but time and again it did.

It was a pay-before-you-go vacation, so there were many decisions and details that had to be tended to months in advance: where to go, where to stay, whether to drive or fly or both between destinations and, maybe the most important of all, the budget.

We splurged on an already expensive trip and popped for our own all-in-one driver, naturalist and tracker. It was well worth it. George Killas with Ranger Safaris scooped us up at the Arusha Coffee Lodge, where we had overnighted after our arrival at nearby Kilimanjaro International Airport, and was all ours until we boarded a regional flight for our last destination, the Serengeti, where we made similar arrangements.

It meant we could set our own pace without deferring to others in a group safari. Although most lodges take their guests out twice daily in vans, we often opted to spend the entire day in the bush, our lunch served on a table in the middle of nowhere, alongside the zebras and giraffes. Or we could linger and wait for that precise moment when a cheetah would wake from its nap and jump into or out of a tree or perform some other spellbinding feat.

Finally, it gave George time to explain in depth all the wonders — both animate and inanimate — before us. More time too to talk about his beloved Tanzania, including the history and culture of the hundreds of tribal communities that coexist here. One of the most poignant moments of our trip came during a stopover at an orphanage in Mto wa Mbu, which means Mosquito River. Most were there because their parents had died of HIV, still the largest cause of death in this region, followed by malaria. George led the schoolchildren in singing their national song. Their voices rang out clear and prideful. The singing over, the children surrounded him, everyone admiring his Obama hat, a gift from us.

Although our accommodations were tents — some in treetops, others slightly elevated and positioned to maximize the views — they were not of the roughing-it variety. Hot and cold running water, plush linens, laundry service and four-course meals were all included. And all were built to blend into the environment, as at Tarangire Treetops camp, where limbs from the region’s ubiquitous giant baobab trees protruded through the canvas walls and thatched roofs.

Still, it is Africa, and a visitor is constantly reminded that danger lurks. At Tarangire, the veranda encircling our treehouse was accessed by a ladder and a trap door that was closed at night to prevent wildlife from venturing inside. Forgetting to look up can also have dire consequences. On our first morning we learned that a black mamba — one of the world’s most lethal snakes — was found on the roof of one of the treehouses. On our second night, we were awakened by a roaring lion that sounded too close for comfort.

In addition to George, members of the famed Masai tribe were ever present to protect, advise and make a traveler’s experience more memorable. Throughout the trip they did everything from the pre-dawn lighting of wood-burning water heaters to accompanying jittery travelers on hikes and to and from dinner — always with a weapon and flashlight in hand.

Each place we stayed had unique sights and sounds that served to remind us of where we were. At Lake Manyara Tree Lodge, we could hear the elephants thrashing around outside even when we couldn’t see them. Everyone loves an elephant, but no one would want to have one as a neighbor. We were once surrounded in our Land Cruiser for an hour by a herd that was dismantling its jungle surroundings, a trunk load at a time.

Lake Manyara National Park is known for its large number of baboons. If you’re traveling with young children, beware; the baboon’s public behavior is not exemplary. They fight, they chase, they scream — and they make a birds-and-bees discussion with that young adult in your family unnecessary.

Our lodging at Lake Manyara also had a lovely outdoor shower, but its instructions came with a warning. Whatever you do, we were told, make sure to replace the leather straps that prevent the water taps from being turned on by anyone except paying occupants. It seems that the black-faced monkeys like to take showers too, but are notoriously unconscientious about turning off the water when they finish.

There are no amenities on the floor of the Ngorongoro Crater, but the sights and sounds of animals and the drama of predator and prey sharing the same space are on full display. The crater has one of the densest concentrations of animals in Africa, with 30,000 mammals making it their permanent home. Although animals can move freely in and out of the crater, dense forest and spring lakes are enticements to remain. The downside to this eye-popping natural wonder: There are few roads that traverse the crater, so the numerous vehicles and, therefore, tourists diminish the sense of adventure.

Except this time. We only had to look at the vehicles parked on the side of the road to know that something was afoot. We quickly spotted a stalking lion, keeping low, as it moved along a trench. Nearby was a seemingly unsuspecting herd of grazing wildebeests. Were we going to be lucky enough to see a second lion kill? After nearly half an hour of suspense, the lion slowly emerged from his hiding place. We would quickly have an answer to our question: No. An attentive wildebeest, seeing the lion, quickly rounded up the herd’s stragglers.

At Migration Camp in the Serengeti, it’s a nighttime routine for hippopotamuses to leave the Grumeti River, which runs through the property, and graze near the canvas cottages. Our naturalist explained that hippos, sensitive to sunlight, spend most of the day partially submerged in water, preferring to come out to graze in the cooler part of the day. The Serengeti is sprinkled with “hippo pools,” stagnant water that is unpleasant to see or smell because hippos defecate in the water in which they thrive — even creating foul geysers as they splash themselves to keep cool.

Sadly, the hippo’s worst predator is not the four-legged variety. The ban on ivory has provided some relief for the elephant, but poachers now have turned their attention to hippos and their tusk-like ivory incisors. Poaching here is not the problem it is in Kenya but, nevertheless, it does exist.

A traveler on safari is understandably focused on catching glimpses of the big five. But the beauty of the Serengeti is unparalleled, with vast expanses of grasses, trees seemingly placed strategically throughout the landscape, each sunset the best you will ever see. These are reasons enough to make this journey. It just happens to be an amazing plus to be able to scan the perfectly extended bough of an acacia tree and spot a leopard sprawled on it seeking refuge from an early afternoon sun. We waited, of course, until it finally descended for a close-up photo-op. And just in time. The sun was beginning to set on our last day. Leopard: Check. 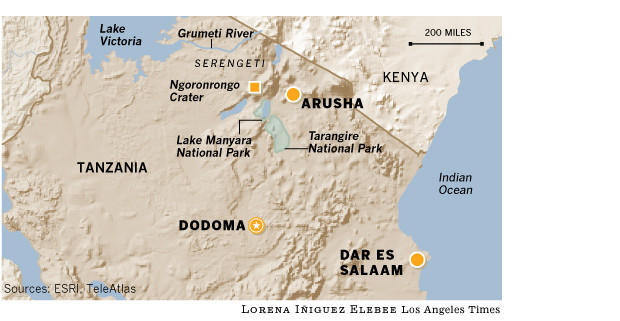