After settling quietly into a $2.5-million, 8,000-square foot home in the Sacramento suburb of Loomis, the man who introduced himself as Jason Wang said nothing to his new neighbors about being connected to the innermost sanctum of Chinese politics and elite business circles.

He and his wife, known to neighbors as Jane, would share meals with their fellow residents on Terracina Court, a cul-de-sac of Mediterranean-style houses. 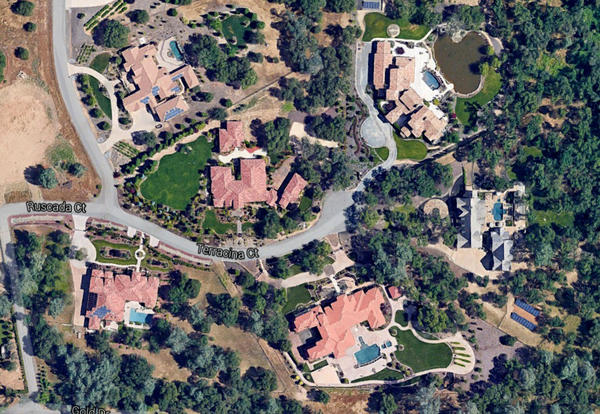 The Terracina Court cul-de-sac in the Sacramento suburb of Loomis. (Google Earth)

Jason Wang was a golf enthusiast, neighbors said. He was memorably friendly — the couple bought the property in 2013 from NBA player Beno Udrih, who once played for the Kings and now is a member of the Memphis Grizzlies, and sometimes, he would send texts asking for advice on home maintenance issues.

“He was a wonderful man; tremendously generous. They would come over for dinner,” said neighbor Sarah Matteson, who recalled that she and her husband received a couple of magnums of Napa wine from their new Chinese acquaintances. “Jason seemed to get along with my husband, who is a good judge of character.”

But several months ago, Matteson said, a van appeared in the neighborhood and a woman and man jumped out, showed Department of Homeland Security badges and asked about the Chinese couple.

“I just hope he is safe,” she said of Jason Wang. “I would have never figured him for a man involved in all this intrigue.”

The “intrigue” is one of the most sensitive corruption cases in recent Chinese history — the pending trial of Ling Jihua, the onetime top aide to ex-President Hu Jintao. 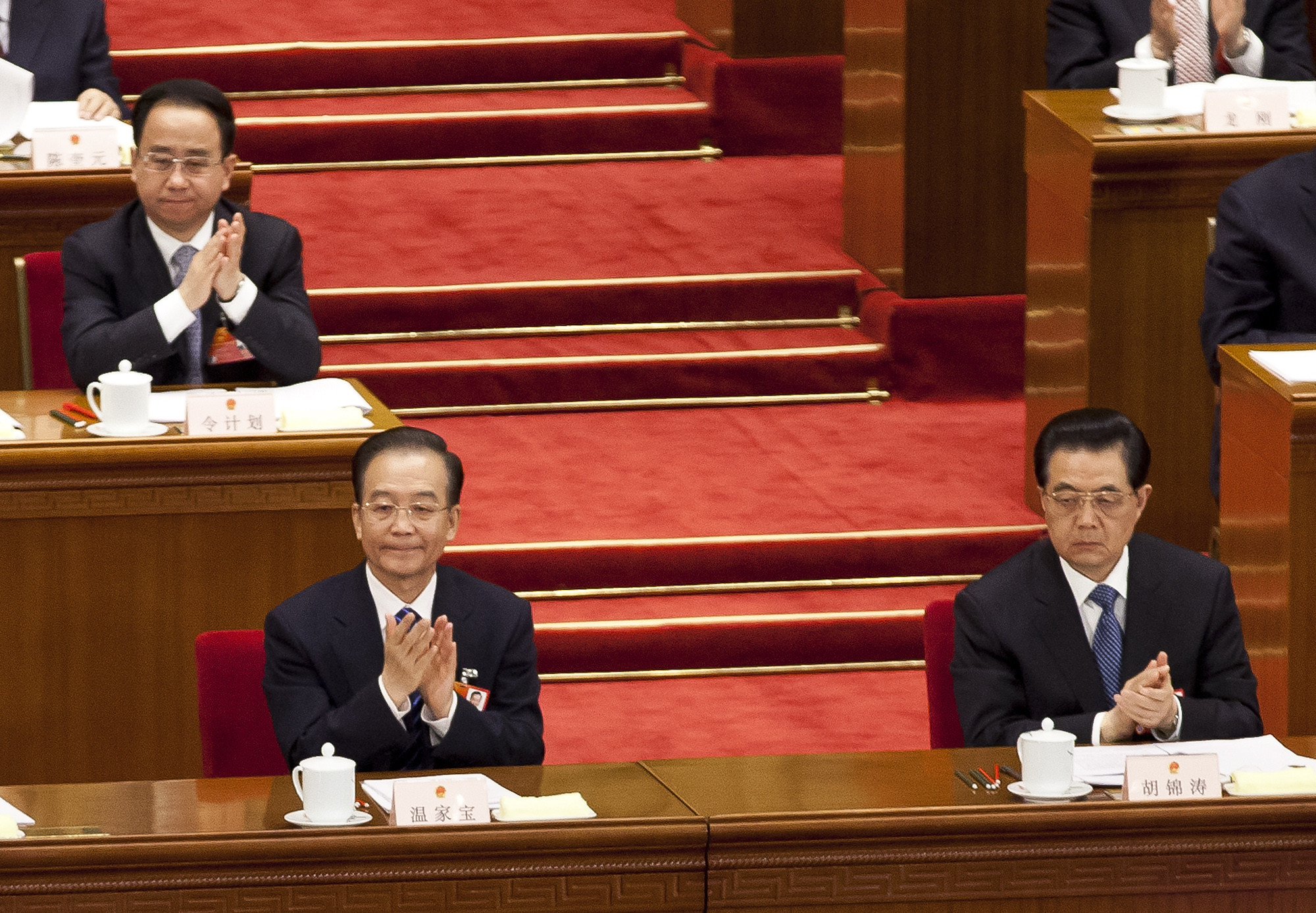 Ling Jihua, top left, an aide and confidant to then-President Hu Jintao, bottom right, attends a plenary session of the National People's Congress at the Great Hall of the People in Beijing on March 11, 2012. (Andy Wong / Associated Press)

Until three years ago, Ling Jihua served in a role akin to White House chief of staff, which gave him access to a wealth of confidential information about China’s top leaders, including current President Xi Jinping.

But when his son died in a fiery Ferrari crash in 2012, Ling’s political rise came to a quick halt. He and his family fell under a cloud of questions about how they had become rich enough to afford such luxuries as a Ferrari. The Communist Party soon formally put Ling under investigation, along with his older brother, state-run media announced last year.

But authorities made no mention of Ling’s younger brother, Ling Wancheng, a onetime journalist for the state-run New China News Agency who later became a wealthy investor and passionate amateur golfer.

Now, though, California property records and other evidence suggest that the golf-loving Jason Wang of Loomis is none other than Ling Wancheng.

Years ago, Ling Wancheng began using the name Wang Cheng in both Beijing business and golfing circles. Property records for the Terracina Court home indicate it is owned by Wang Cheng and someone named Li Ping. (Ling married a Chinese state-run TV host of the same name in the 1990s; specific identifying details of the person on the property record could not be confirmed.)

Matteson, shown a picture of Ling Wancheng, said she was “100% sure” it was the man she knew as Jason Wang.

Today, the whereabouts of Ling Wancheng are unknown, and it is unclear why Homeland Security officers were seeking information about him.

Ling Wancheng’s name does not appear on a roster that Chinese authorities put forward this spring, listing 100 most-wanted fugitives accused of economic crimes, including 40 in the U.S. Among the wanted are a history professor, a newspaper worker, several police officials and numerous employees of banks and other state-run companies.

Even if Ling’s name were included, however, China and the U.S. do not have an extradition treaty.

China’s Foreign Ministry did not respond to a request for comment on whether Beijing has asked U.S. authorities to return Ling Wancheng to China.

Justice Department spokesman Marc Raimondi declined to discuss Ling’s case, but suggested the administration would not provide asylum to a known criminal from abroad.

The Justice Department “has repeatedly shown that it will vigorously pursue prosecutions in the United States where there is alleged money laundering or other criminal activity in this country by fugitives sought by China,” Raimondi said in a statement.

“For these cases to be successful, however, China must provide evidence to the Department of Justice. ... Too often, China has not provided the evidence we have requested. It is not sufficient to simply provide a list of names.”

On the other hand, close observers of the Ling Jihua case suggested that American authorities may be more interested in protecting the former official’s younger brother than aiding a prosecution.

“Because of his brother’s position, Ling Wancheng may have knowledge of more government secrets than anyone who has fled China since 1949,” said Ho Pin, founder of the U.S.-based Chinese language news website Mingjing News, which publishes juicy headlines about the machinations of the Communist Party leadership.

“Not so much military-type secrets, but real details about corruption and information about current leaders that could destroy the image of the Communist Party if revealed,” he said.

Chinese government agents have been known to travel to countries including Canada, the United States and Australia to persuade or pressure fugitives — as well as their friends, family members and business associates — to return to China.

Chris Johnson, a former CIA China analyst who is now with the Center for Strategic and International Studies think tank, said he believes the Chinese badly want Ling back.

Based on his conversations with U.S. officials, Johnson said he understood that the Chinese have asked for his return, now that there is a U.S.-China summit coming up. Xi is expected to visit President Obama in Washington in September.

If the Chinese are trying to keep this discussion below the radar, Johnson said, that may be a sign of how important it is to them. “This is a big deal,” he said.

U.S. authorities, however, are wary of sending any suspects back to China, concerned that the authoritarian regime is asking for the return of people who are really wanted for political reasons. At the same time, they do not want to appear to be inviting Chinese criminals to flock to the United States.

Matteson said she last saw her Chinese neighbors in Loomis in October, but the real estate agent who sold the home to "Jason" and "Jane" told her she saw the husband a couple of months ago.

Boxun, another U.S.-based Chinese language website, quoted one of Ling Wancheng’s Irvine-based business associates, Shuhai Li, as saying he had spoken to Ling by phone on July 25 and he was still in the United States.

Li is an executive of Asian Pacific Group, which was founded in 2012 and owns two golf courses — Darkhorse Golf Club in Auburn, Calif., 11 miles north of Loomis, and Sunridge in Carson, Nev., near Lake Tahoe.

In addition to golf management, the company promotes itself as being involved with real estate and helping wealthy Chinese obtain U.S. investor visas, particularly by putting money into troubled golf courses.

Ling’s unlikely path to the wealthy suburbs of Sacramento

Ling's journey to the grassy links of Northern California began more half a century ago, at the height of Mao Tse-tung’s Great Leap Forward, a radical attempt to modernize China’s agricultural system that led to widespread famine and millions of deaths.

What role, if any, Ling Wancheng will come to play in the case of Ling Jihua remains unclear.

Yet experts say there are certain to be more examples of wealthy relatives of top Chinese officials heading to the U.S. and elsewhere as the anti-graft campaign continues.

“This shows the corruption has penetrated into the core of the Chinese leadership,” said Li Datong, a retired editor at the state-run China Youth Daily. “More and more officials are fleeing China, or they are getting ready to flee.”

Li said that official corruption in China is a systemic problem, and even Xi Jinping's wide-ranging anti-corruption campaign — which has jailed more than 100,000 officials in recent years — has done little to address its root causes.

“The wild grass cannot be burned completely,” Li said, quoting a Chinese proverb. “It’ll grow back with the spring breeze.”

Winton reported from Los Angeles, Makinen and Kaiman from Beijing. Paul Richter and Timothy Phelps in the Times’ Washington bureau and Tommy Wang and Nicole Liu in the Times’ Beijing bureau contributed to this report.

Tibetans lose a haven in Nepal under Chinese pressure

Despite common aims, Russia and U.S. clash on how to fight Islamic State

Richard Winton is an investigative crime writer for the Los Angeles Times and part of the team that won the Pulitzer Prize for public service in 2011. Known as @lacrimes on Twitter, during almost 30 years at The Times he also has been part of the breaking news staff that won Pulitzers in 1998, 2004 and 2016.