From the archives:: 20 years ago today, Rabin assassination changed history

Twenty years ago today, Israeli Prime Minister Yitzhak Rabin was assassinated by a Jewish extremist opposed to his peace deals with the Palestinians, known as the Oslo Accords. The gunman, a 25-year-old law student, shot Rabin in a parking lot at the end of a rally in Tel Aviv.

Below is a compilation of The Times' front-page coverage from Nov. 5, 1995. 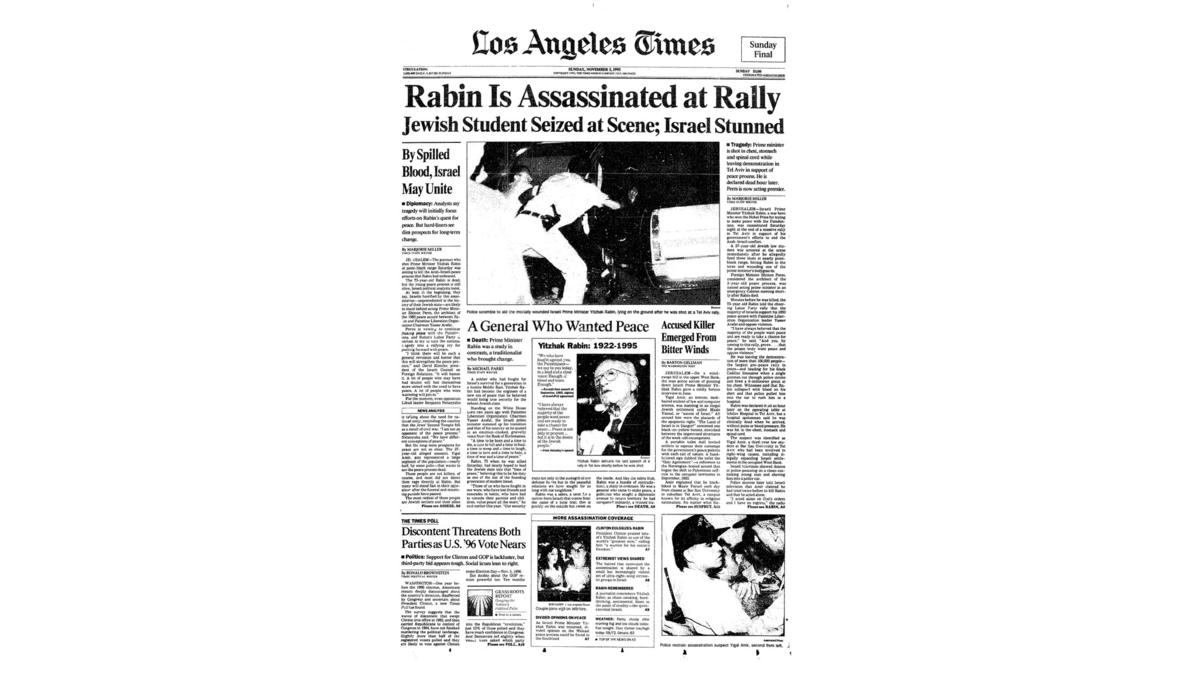 Rabin is assassinated at rally

Israeli Prime Minister Yitzhak Rabin, a war hero who won the Nobel Prize for trying to make peace with the Palestinians, was assassinated Saturday night at the end of a massive rally in Tel Aviv in support of his government's efforts to end the Arab-Israeli conflict.

A 27-year-old Jewish law student was arrested at the scene immediately after he allegedly fired three shots at nearly point-blank range, hitting Rabin in the torso and wounding one of the prime minister's bodyguards.

By spilled blood, Israel may unite 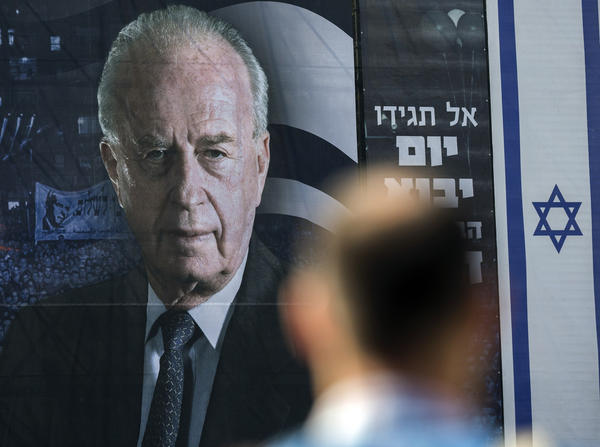 An Israeli man stands in front of a billboard bearing a portrait of late Israeli prime minister Yitzhak Rabin, ahead of a memorial rally marking the 20th anniversary of Rabin's assassination. (Jack Guez / AFP/Getty Images)

The gunman who shot Prime Minister Yitzhak Rabin at point-blank range Saturday was aiming to kill the Arab-Israeli peace process that Rabin had embraced.

A general who wanted peace 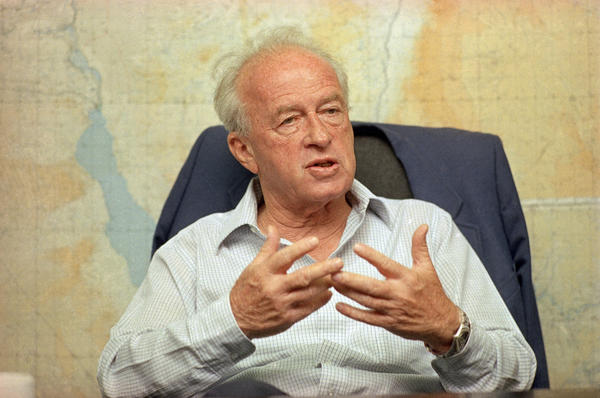 Then Israeli Defense Minister Yitzhak Rabin talks with the Associated Press on May 18, 1989 at the Ministry of Defense office, in Tel Aviv, Israel. (Anat Givon / Associated Press)

A soldier who had fought for Israel's survival for a generation in a hostile Middle East, Yitzhak Rabin had become the engineer of a new era of peace that he believed would bring true security for the reborn Jewish state.

Standing on the White House lawn two years ago with Palestine Liberation Organization Chairman Yasser Arafat, the Israeli prime minister summed up his transition and that of his country as he quoted in an emotion-choked, gravelly voice from the Book of Ecclesiastes:


On a wind-swept hill in the upper West Bank, the man police accuse of gunning down Israeli Prime Minister Yitzhak Rabin gave a coldly furious interview in June.

Yigal Amir, an intense, dark-haired student of law and computer science, was standing in an illegal Jewish settlement called Maale Yisrael, or "ascent of Israel." All around him were the placards of the apoplectic right. "The Land of Israel Is in Danger!" screamed one black-on-yellow banner, stretched between the improvised structures of the week-old encampment.

A portable toilet stall invited settlers to express their contempt for the government's peace policies with each call of nature. A hand-lettered sign dubbed the toilet the "Oslo Agreement"--a reference to the Norwegian-hosted accord that began the shift to Palestinian self-rule in the occupied territories in September, 1993.

What would have happened if Yitzhak Rabin had lived?

How doctors fought to save Israeli Prime Minister Yitzhak Rabin, and lost