Unwrap a mummy, share your art: the digital innovations seven L.A. museums are most excited about

Like most everything else in the the modern world, museums are going digital. Even though their collections often go back hundreds -- even millions -- of years, these visitor-reliant institutions need to stay relevant in the 21st century.

Below are examples of how a variety of museums in Los Angeles are using digital technology as well as thoughts from curators and others about the ways technology can both help and hinder the museum-going experience.

Unwrap a mummy at the Natural History Museum of Los Angeles 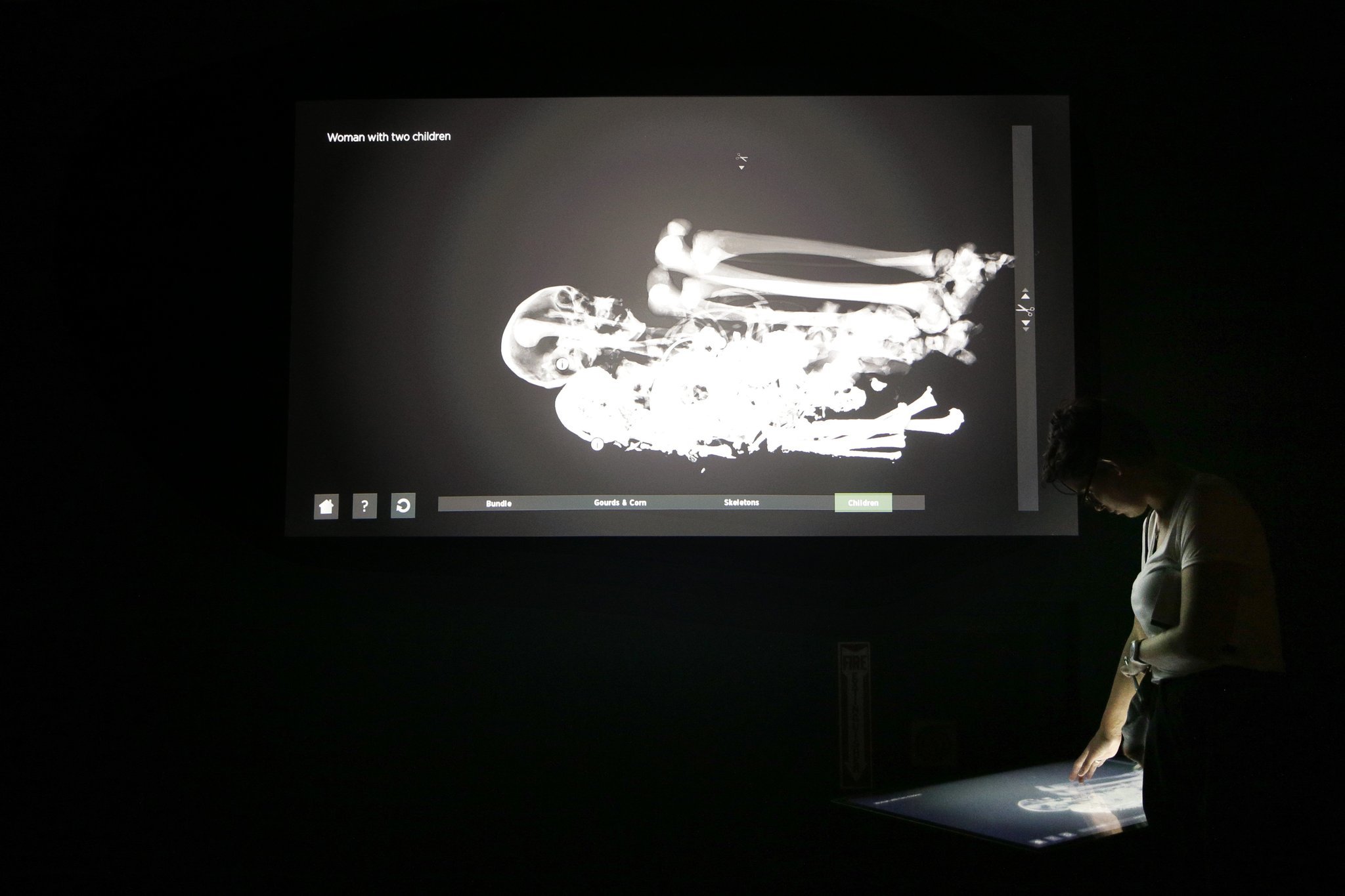 Alexis Hyde, right, looks at an interactive display of a CT scan from a Peruvian mummy of a woman with two children at the Natural History Museum. (Jae C. Hong / Associated Press)

"Digital does not replace real objects, humans are very sophisticated about that, even small kids," says Karen Wise, vice president of education and exhibits at the Natural History Museum.

Nonetheless, sometimes real objects, like the ancient mummies on display in the museum's "Mummies" exhibit, can be better understood, and better accessed, using technology.

Related: How museums are adapting to 'selfie culture' >>

Digital touchscreens throughout the exhibit allow visitors to gain access to actual CT scans of the mummies so that the visitors are in effect unwrapping the mummies themselves in order to discover valuable information about the body underneath, including its age and the ceremonial items it was buried with.

There is a huge amount of maintenance behind the scenes in order to pull these enhanced user experiences off, says Wise. The NHM employs a tablet-based tracking system that makes sure the technology is running as it should be.

Voices of the past speak (digitally) at the Autry National Center 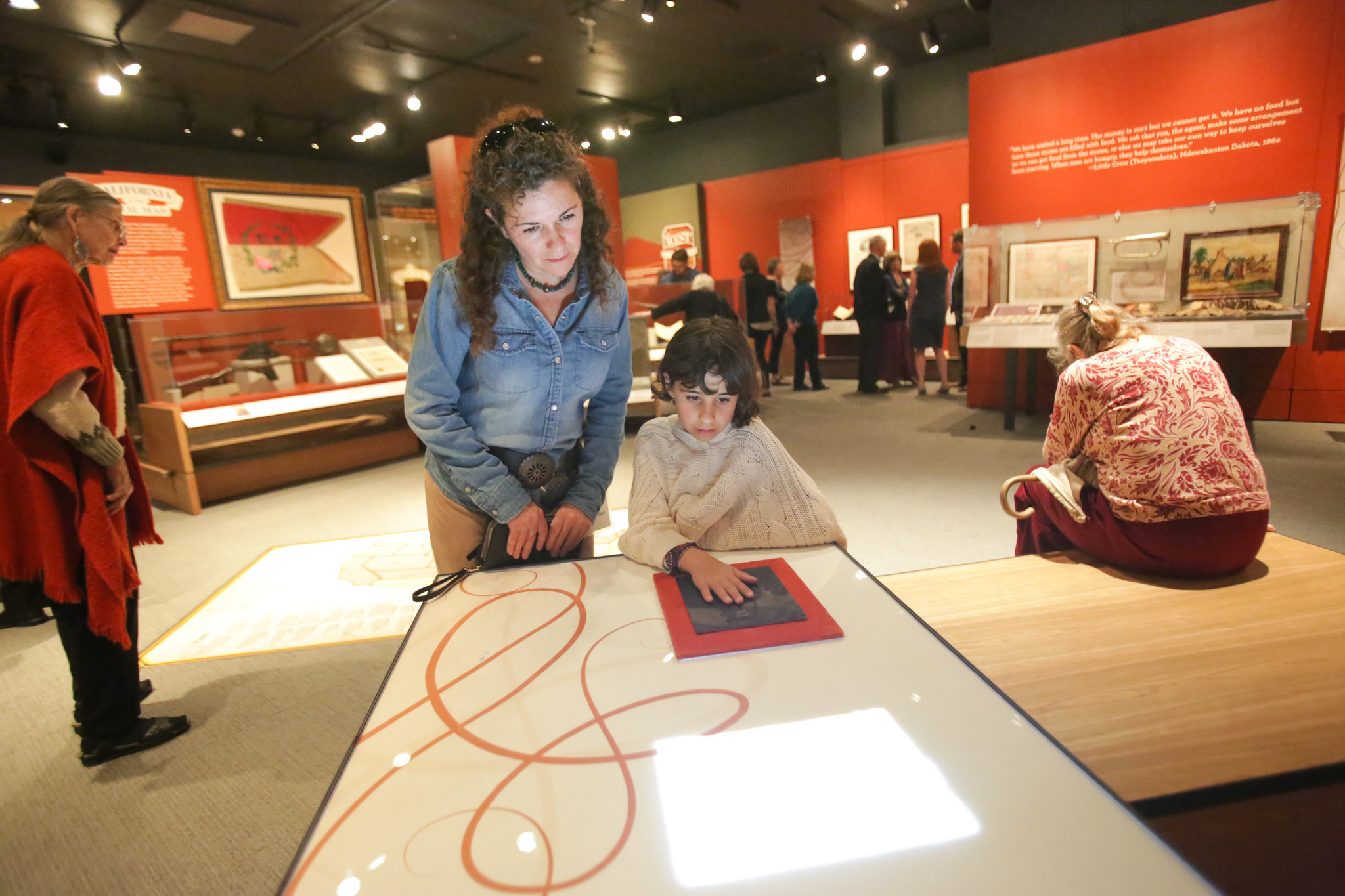 “How do we make sure that when we introduce technology into an exhibit that it brings a meaningful experience?” asks Laura Purdy, senior media producer at the Autry.

That question inspired the Autry in 2012 to adopt a strategic “visitors-first” plan.

“Our focus is on how we can engage visitors and be relevant to them,” says Stacy Lieberman, executive vice president and deputy director. “As a history museum we must deal with the relevance question every day in a way the Broad may not need to.”

In order to answer that question for its "Civil War" exhibit, the Autry created 14 short films featuring the first-person stories of characters typical of the time. The films are played when a user places a hand on various "daguerrotypes" in the exhibit.

"We really wanted the public to engage with the content on a very emotional level," says Purdy. "We wanted it to be an active choice for visitors, so your hand has to remain on the daguerrotype in order to get the whole story."

One thing the Autry learned from this experiment is how differently various generations react to technology.

"The old pictures are so beautiful that people didn't want to touch them," says Purdy of the "daguerrotypes." "Younger people were fine with it, though, so the older people learned from them. But we had to add some extra signage." 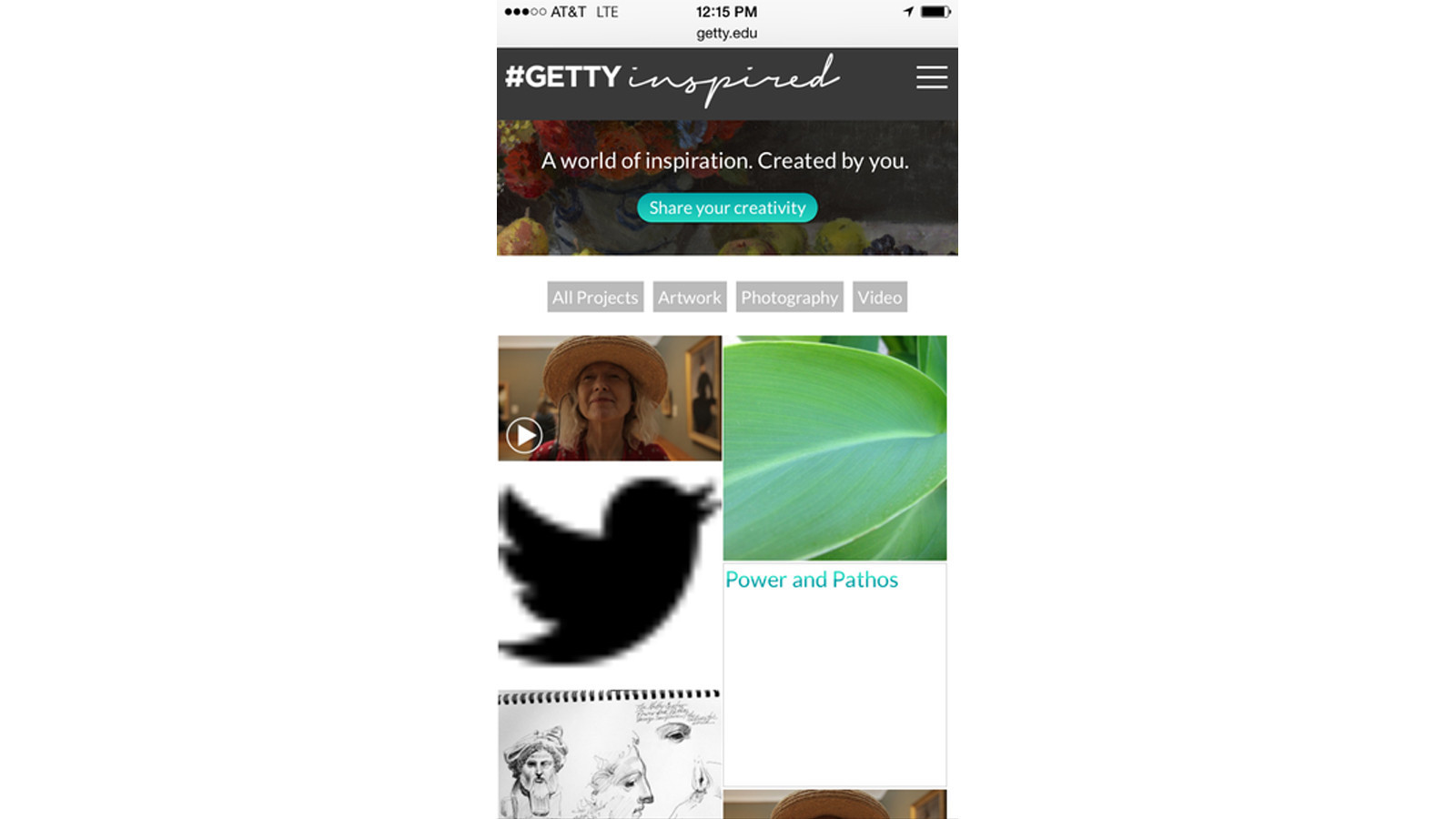 #GettyInspired is a new digital initiative at the Getty, which allows visitors to engage beyond the museum walls. (The Getty)

The Getty Museum is on the forefront globally of digitizing its collections and making those images and valuable collection information available to both the public and scholars. This open content has pushed many other museums to do the same.

In addition, the Getty has launched a digital initiative called #GettyInspired, which encourages users to post about how the Getty has enhanced their creativity.

"One of the reasons that we're doing this is that we've seen that people are using our open content materials in really interesting ways," says Amy Hood, senior communications specialist at the Getty. "They're essentially creating new digital artwork." 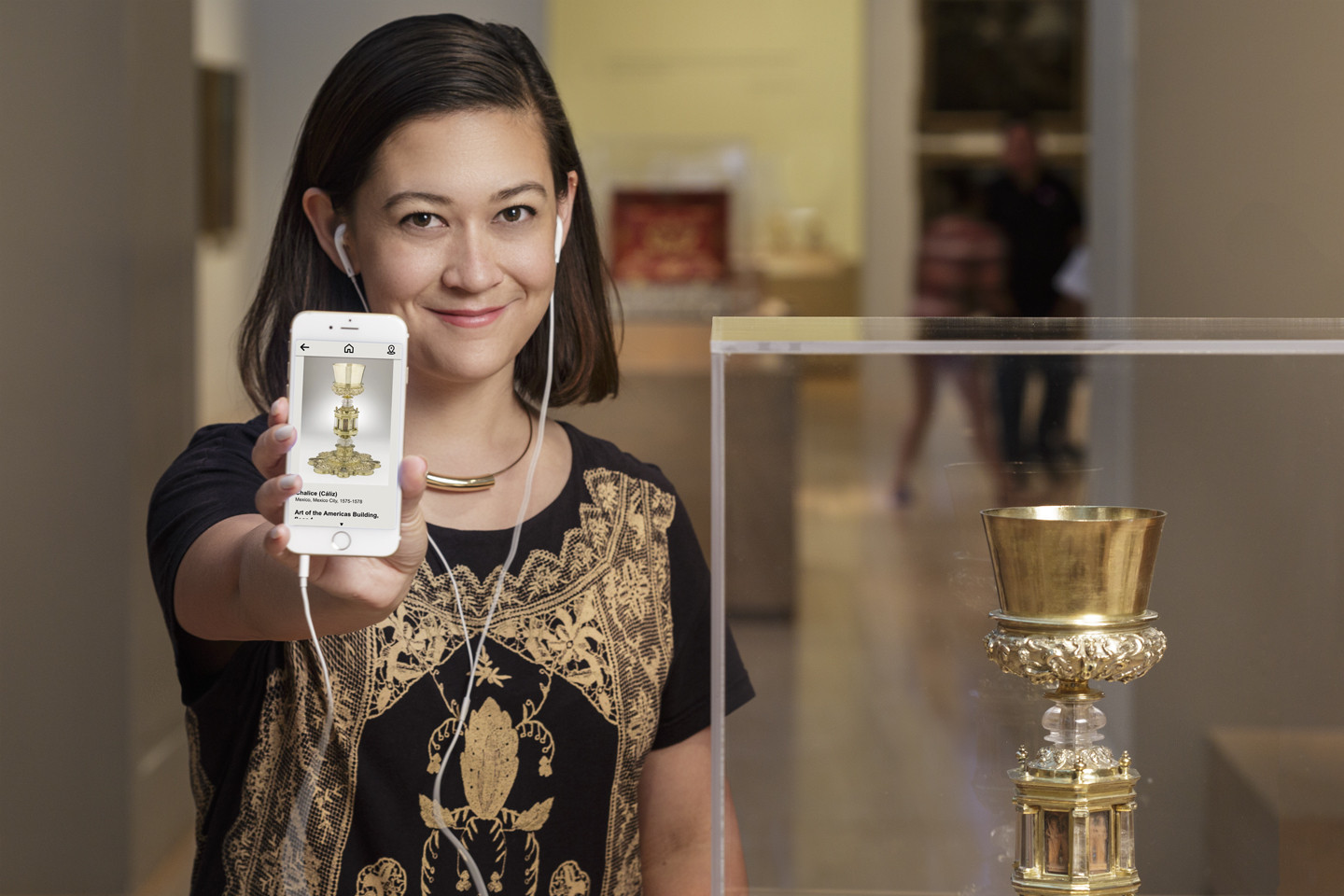 "There's always such a thing as too much information," says Amy Heibel, vice president of technology, Web and digital media at Los Angeles County Museum of Art. "One of the things that museums sometimes get wrong is that they offer too much didactic information."

LACMA sought to avoid that pitfall when creating its new mobile app (its first mobile app was created so long ago that it was made for a BlackBerry) by making the information inside of it extremely conversational in tone.

"We wanted it to feel like you're walking around with a friend who knows a lot about the museum," says Tomas Garcia, a developer in LACMA's digital media department. "When we first described it we called it "Snapple facts" about LACMA."

The museum is also judicious when it comes to its use of Bluetooth beacon alerts. There are only about a dozen beacon messages strategically placed in areas in between art objects. The museum doesn't want to encourage visitors to spend too much time looking at their devices. 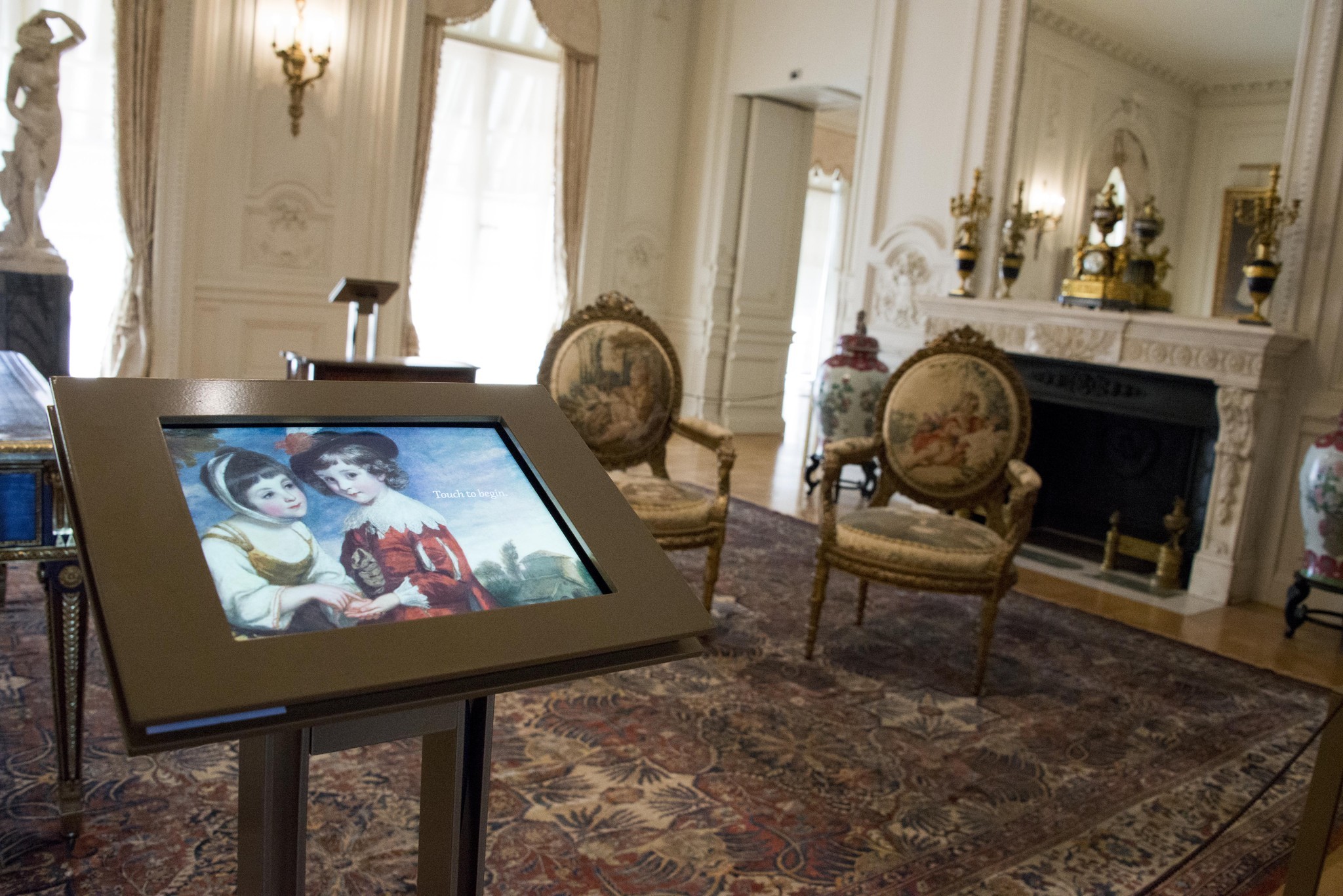 The Huntington features iPads loaded with helpful information in its historic rooms. (The Huntington Library, Art Collections, and Botanical Gardens)

The iPads at the Huntington replace traditional labels called "tombstones" and are, for the time being, placed in strategic places around the museum's historic rooms. They offer up a wealth of information about the objects in those rooms, including furniture, sculptures, books and paintings.

The rooms are meant to reflect the way that Henry and Arabella Huntington once lived, and the museum realized that that was a story more complicated than the information a regular label allowed for.

"It's becoming second nature for people to scroll through an iPad, to find the homepage, and a couple of years ago that wasn't the case," says Catherine Hess, chief curator of European art at the Huntington. "So we tried to be very respectful of the museum's interior while at the same time being modern and useful to people."

Hess says there are about seven iPads located in strategic spots around the galleries and that she has never seen too many people crowded around an iPad at once.

"We have labels that are touchable," she says. "Some people love touching and learn by feeling." 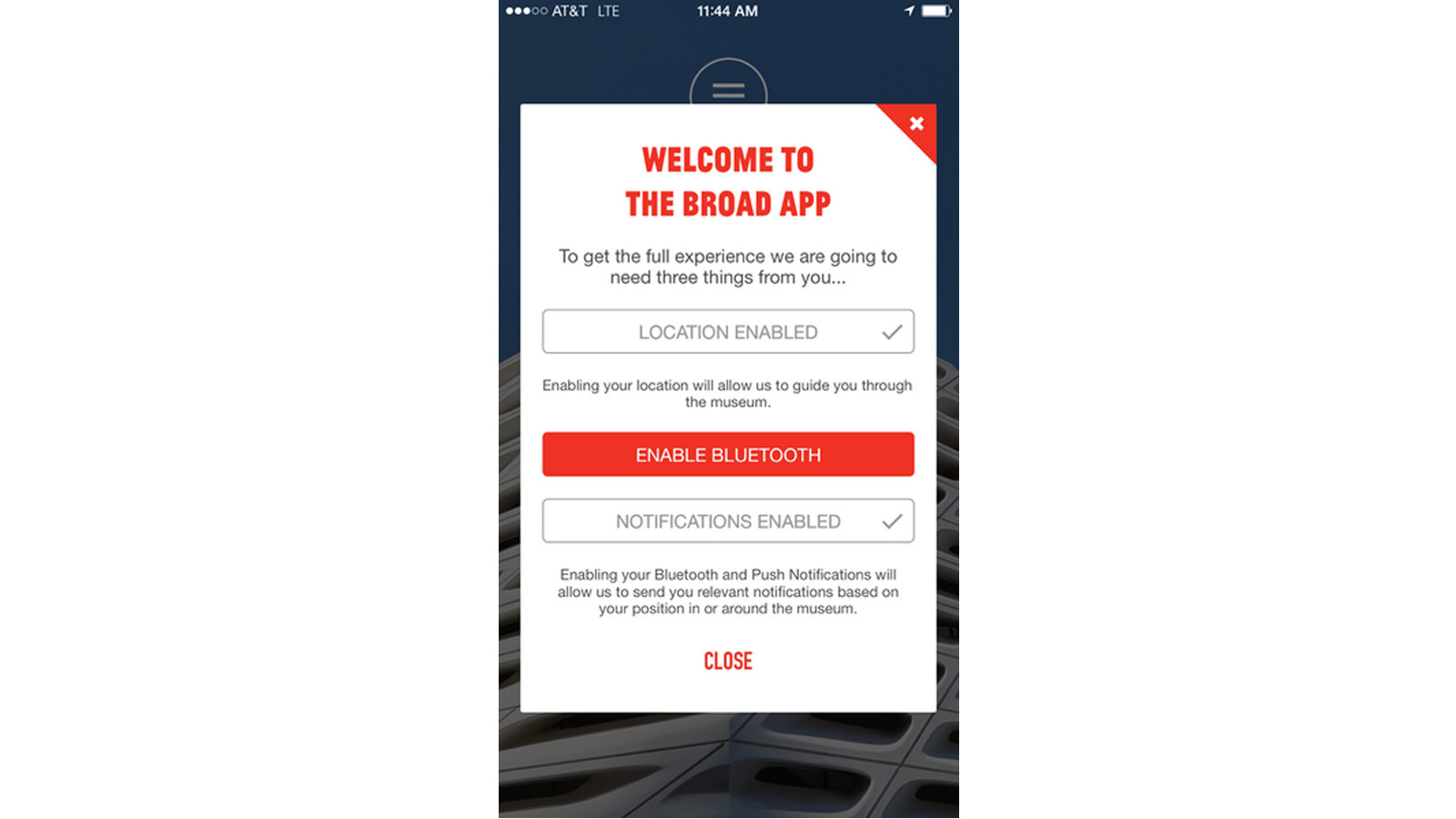 The Broad museum's mobile app uses Bluetooth technology to be location-aware. (The Broad)

Museum apps are currently shining when it comes to the ability to be location aware, says Rich Cherry deputy director of the Broad and co-chair of the annual conference Museums and the Web.

"Audio tours seem to be effective but the new piece is that the app allows us to know where you are in the museum so we can provide you with contextually aware information," he says.

If you happen to be near the museum's archive, which visitors can actually peer inside of, your phone will send you a push notification telling you to stop and check it out. You can then access further information via an audio tour in the app.

Museum apps are also working toward making relational suggestions, much like those made by Amazon or Netflix, says Cherry. For example, if you're interested in a particular Cy Twombly piece at the Broad the app should eventually be able to suggest that you check out a big Twombly exhibition at MOCA across the street.

"In a perfect world I would like to see the wireless network here extending across the street [to MOCA]," says Cherry. "The app just looks different when you go to MOCA." 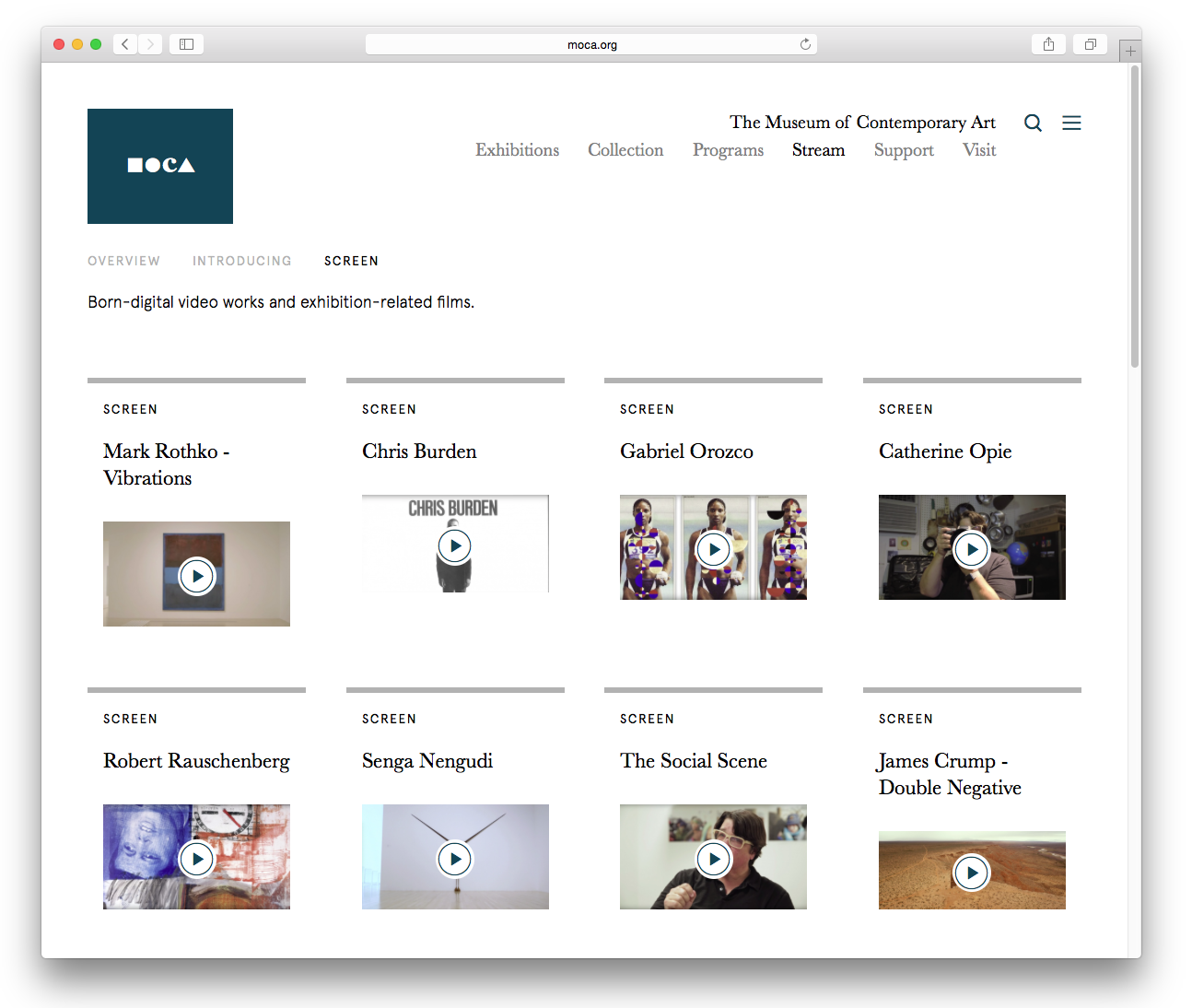 MOCA's new website is packed with valuable information, including videos of artists talking about their work. (LACMA)

MOCA's chief curator Helen Molesworth is not a big fan of the use of digital technology, such as apps, inside the museum. She feels they distract visitors from having a personal, unmediated experience with the art. But that doesn't mean that she -- or MOCA -- is scared of technology.

The museum is instead focusing its efforts on constantly improving upon, and adding to, the robust new mobile-friendly website that it recently launched.

The idea, says Molesworth, is that visitors will want to visit the site while having their morning coffee or while riding the bus to work.

The museum's YouTube channel MOCAtv already has a robust audience and now the museum is introducing a new program called "Screen," which integrates video content into the fabric of the museum via the website. There are videos of artists interviewing other artists, as well as videos of artists talking about their work.

"I don't have a value judgment around technology in the museum," says Molesworth. "I just know that screen culture is a culture of endless diversion, and what we're hoping for as a museum is attention."

How museums are adapting to 'selfie culture'

Jessica Gelt writes about arts and culture for the Los Angeles Times.