Chill out and you’ll make the best biscuits ever

With so many of you having to stay home and cook for the first time — ever or more than you have in a long time — we get that it can be overwhelming to have to cook all your meals from scratch. So we’re here to get you started.

Each day we’re going to post a new skill here and go into detail about how to do it — a resource for cooking basics so you can get food on the table and get through this.

Lesson 17: Buttermilk biscuits
During my 12 ½ years working in food media, I’ve seen a lot of biscuit recipes come and go. Some, developed by test kitchens like the ones I worked in, were aimed at helping the home cook; some were by restaurant chefs who could indulge themselves with wildly complicated formulations.

Some called for grating frozen butter and tossing it with flour instead of pinching the two together with fingers. Some called for folding the just-made dough over on itself an infinite number of times in an effort to re-create the laminated layers of croissant dough that puff to the heavens.

Reader, I’ll admit, these methods produced, well, results! But the results — sometimes the biscuits were extra flaky, sometimes they were just tough — never seemed to outsmart a component of making biscuits that most cooks and chefs, outside those from or living in the South, missed: A truly great biscuit is one eaten piping hot. Once even the best biscuit goes cold, it loses its soul. And, as a Southerner who grew up eating biscuits from birth until I moved to “the North,” I can tell you that all these tricked-out methods never produced a biscuit as effortless or delightful as the one my grandmother churned out every single week of my childhood in Mississippi.

Biscuits, like many of the world’s most delicious things, are peasant food and thus are meant to be made with the cheapest ingredients that, in the hands of a skilled cook, alchemize into edible gold. You don’t need freshly milled flour from a heritage grain silo or the butter with the highest fat percentage on earth; you need only the basic bag of AP (that’s “all-purpose” flour in kitchen-speak) and a few cups of buttermilk. Biscuits also shouldn’t take long to make but be something you can whip up on a weekend morning and have hot and ready to serve in less than an hour. And despite what you might glean from those overly complicated recipes, making biscuits is easy; it just takes a little practice. What better time than now to get in your dough steps?

If there’s one takeaway from making biscuits I want you to remember, it’s this: chill. This applies to the state of your ingredients but also your attitude. If your flour, butter and buttermilk are all cold, and you’re as cool as a cucumber, you’ll have great biscuits. If at any point you think to yourself, “Am I messing this up?!” simply stopand place your ingredients — whether separate or half-formed into dough — in the refrigerator to stay cold while you cool yourself off by taking a few deep breaths. Once you’re calm again, continue on and you’ll do great.

First, clean your kitchen counter and set out a regular dinner fork and your biscuit-cutting implement. This can be an actual round cookie cutter or, sure, the top rim of a drinking glass — the sharper and thinner the edge, the better, but again, don’t stress about it. Now gather your ingredients: Cube your butter and keep it cold in the refrigerator until you need to use it. Same with the buttermilk: Measure it out and chill it in the fridge. Next, mix your flour with baking powder, baking soda and salt in a large bowl. In the South, we’d use White Lily, a brand of flour with less protein, somewhere between all-purpose and cake flour, that produces softer biscuits. It’s not essential in these “make do with what you have” times, but if you have the foresight to order some online, treat yourself.

Now comes the time to “cut” the butter into the flour — meaning break the butter into small bits in the flour — which when the biscuits are formed and placed in the oven will expand into hundreds of little air pockets that give the biscuits their levity and layers. You can use a pastry cutter or two knives, but I like my God-given fingertips. (One caveat: There are, scientifically speaking, people with “hot hands” and those with cold ones. I have cold ones and thus never have problems keeping dough cold while working with it. But my partner’s hands exist as if he has warming gloves on at all times. And since we want to keep everything chill, if you are one of these hot-handed people, go the pastry cutter/two knives method or find someone else to make biscuits for you.)

Scatter the cold butter cubes in the dry ingredients, give them a toss to coat them all in the flour, then a few at a time, pick them up with your fingertips and smash them with your thumbs. You’ll see they transform into sheets; this is what you want. Continue picking up butter cubes and repeating this action until you see no more cubes. As you smash the butter, some pieces you smashed earlier will get caught in the mix again and break down even further. This is what you want: some large pieces mixed with those cliché “pea-size crumbles.”

A truly great biscuit is one eaten piping hot — once it goes cold, it’s lost its soul.

Next, push everything against the side of the bowl, forming a well in the center, and pour in your cold buttermilk. With your flour-caked fingers, pick up the dinner fork and slowly drag its tines around the side of the bowl, pushing the flour over the buttermilk until the flour dam breaks. Then use the fork to scrape along the bottom of the bowl in every direction until the dough forms a shaggy wet mass. You’ll know you’re done stirring when you see no more loose pools of buttermilk. Don’t try to combine the dough into a completely homogeneous specimen in the bowl; that will happen on the kitchen counter next.

Sprinkle a little flour on your counter, then use the fork to place the dough onto it. Using your hands, gently but quickly gather the amorphous edges of the dough and bring them into the center repeatedly until the dough starts sticking together, never picking up or kneading the dough. Then pat the dough into a 1-inch-thick mass (the shape doesn’t matter). If you don’t have a ruler, use the length from the tip of your thumb to its first knuckle as a guide. Now comes a small “chef-y” part that, ironically, my grandmother actually did: Pick up one side of the dough and roll it, jelly roll style, over the rest of the dough, letting it break or crumble freely, into a log. This technique will help create some extra layers but without all the tedious “letter folds” of making croissant dough. Let the log come to rest on its seam, then pat the dough into a 1-inch-thick sheet again.

Pick up your biscuit cutter, dip its edge in some flour to keep it from sticking to the dough and punch out biscuits. Space the cuts right up against each other so you don’t waste any dough. Sure, you could cut them into squares for no waste at all, but their corners always get a little too dark and crunchy for my liking; round biscuits, like round cakes, cook evenly all the way around. As you cut out biscuits, transfer them to a parchment paper-lined baking sheet. Some might lift up with the cutter — I love when that happens — while others might stay stuck to the counter. Don’t sweat it; just keep cutting out biscuits until there’s no more space on the dough, then use a flat metal spatula to free any biscuits from the counter.

Now, here’s where I digress from tradition, but only because I doubt anyone reading this is needing to feed 10 people at once (and remember from before that a hot biscuit is the only good biscuit). You don’t want to bake all these biscuits and have them sitting around, waiting to be, God forbid, reheated; that would be disrespectful to the biscuit. Instead, I put all the biscuits on the baking sheet and freeze them. This has many benefits: Ice-cold biscuits bake up flakier because the frozen butter melts and puffs the dough quickly, producing those flaky layers, instead of melting into the dough. No one wants a greasy biscuit. It also lets you store your biscuits in the freezer, so whenever the weekend comes, you simply toss a few frozen disks in the oven and you’ve got a hassle-free, hot breakfast. They’ll keep in the freezer forever, so all that work you just did will be worth the joy you experience when, months from now, you spy them in the back corner of your freezer.

When it comes time to bake them, I advise at least two per person, which is what I eat — but choose your own portion journey. Whatever the number, place them on a parchment paper-lined baking sheet so their edges touch. When my grandmother baked hers in a cast iron skillet, all the biscuits arranged like a sunflower, they’d all rise together with their joined edges (this has metaphorical meaning too, of course). This formation produces even lighter, pull-apart biscuits with softer edges. If you want crunchy edges, simply keep the biscuits apart. Brush the biscuits with a little more buttermilk for color and flavor — that’s my one and only change to the recipe — and pop them in the oven.

As soon as they come out, split the piping hot biscuits as you would an English muffin — forked around the equator — then place a pat of cold butter between the top and bottom halves. Let the biscuits sit for 1 minute to melt the butter, then serve immediately while they’re still hot enough to burn your fingers, steam rising from their insides. You can spread them with fruit jam or drizzle them with syrup, but I often just eat them plain, savoring how wonderful it is to eat something that tastes so good that comes from so little. 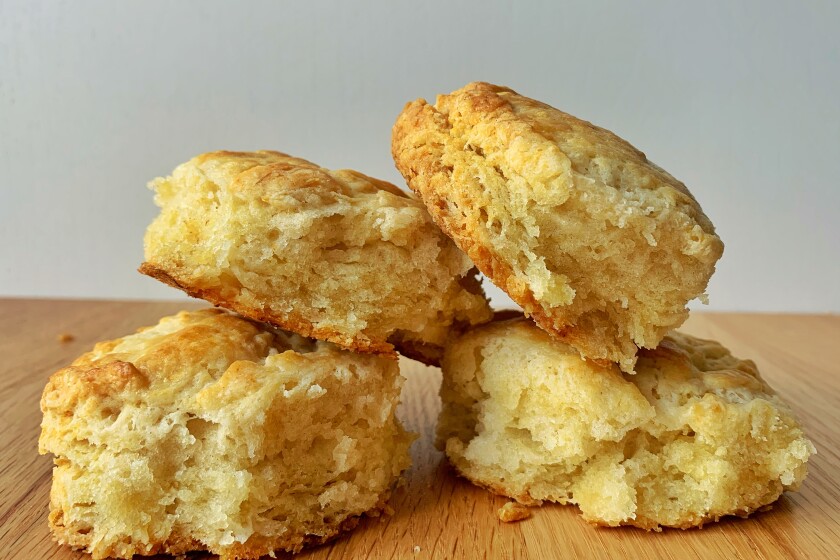