I can make that: The excellent rice pudding at Pasjoli

It is luscious, with a silky whipped cream folded around the kernels of rice. It sings with vanilla. There’s just a hint of cinnamon.

Beran’s pudding is served dolloped on top of candied pecans with slices of pineapple braised in rum and spices and a side of the braising liquid that acts as a sort of pineapple caramel sauce. It’s not too sweet and just a tad salty.

The only rice pudding I’ve ever had like it was Josef Centeno’s at Lazy Ox (and now Baco Mercat, Bar Ama and Amacita). He includes the recipe in his “Baco” cookbook so I know the secret: a huge addition of whipped cream at the end, inspired by the riz au lait at Chez l’Ami Jean in Paris.

So when I set out to replicate Pasjoli’s rice pudding at home, I knew I’d finish it with a restaurant-worthy amount of whipped cream. I didn’t know which variety of rice Beran uses so I tried Arborio, Calrose and basmati before settling on sushi rice because of the short, rounded grains. Turns out, Beran also uses sushi rice.

When I thought I had nailed the recipe, I joined Beran in his kitchen at Pasjoli to make my pudding alongside his. A couple of things I learned during our time in his pristine kitchen:

And although I sliced my pineapple before braising it, Beran cooked a whole pineapple in a combination of rum, butter and spices for hours, and replenished the braising liquid as needed.

Beran and I ended up making our nuts the same way, coated in egg whites and spices and cooked low and slow in the oven.

The final version is something I’m proud of, similar in taste and texture to Beran’s. Would he serve my version in his restaurant? You’ll have to watch the accompanying video to find out.

Please do try it when the restaurant fully reopens (the rice pudding is occasionally offered on Pasjoli’s takeout menu). And in the meantime, here’s a version you can make at home.

**This story and video were reported and shot before the COVID-19 pandemic. 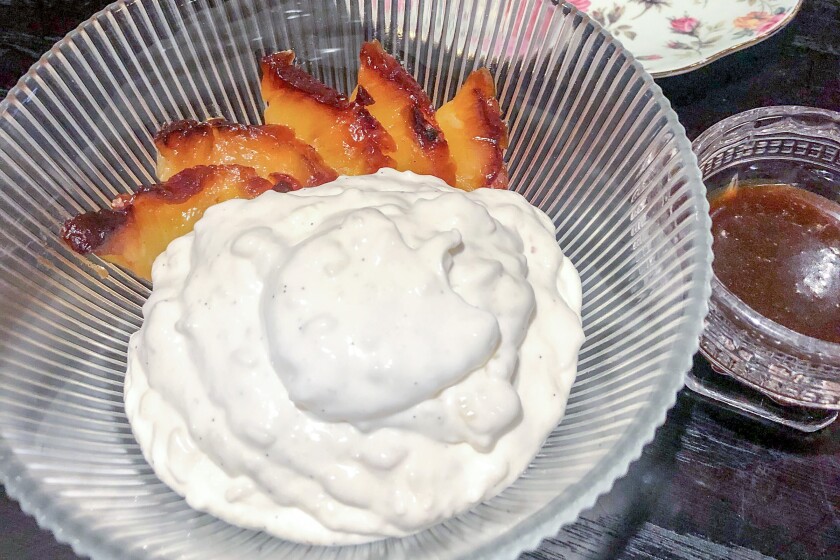