The easiest way to cover candy in chocolate

There are few things in cooking that give me “the dreads” quite like tempering chocolate. It’s a time-intensive, persnickety process that is overwhelming to deal with — and for someone like me, who’s already Type A and exacting, that’s saying a lot. So, you may be asking yourself, “Why recommend a regular home cook do it then?” And the answer is: I won’t. But what I will do is walk you through the process and then give you a passable shortcut that’s not as mind-numbing as the traditional method (and an easy fake-out).

In the most basic terms, tempering is a process by which you melt chocolate to a specific temperature, cool it down to another temperature, then warm it back up slightly to yet another temperature so as to obtain a specific crystallization structure from one or more of the six fats in cocoa butter. This gives the finished product a shiny appearance and a satisfying snap when you break or bite into it.

If you heat chocolate to the wrong temperature or handle it improperly during this process, the wrong fats will crystallize and the chocolate will “bloom,” an occurrence that presents as spots, stripes or splotches on its surface. It doesn’t so much affect the flavor of the chocolate but it does make it look unappealing, not a quality you want in an ingredient whose purpose, among others, is to provide beauty and appeal to the finished candy.

If you’re a chocolatier, you should definitely know how to temper chocolate. I believe that some home cooks will find it worth their time to master the technique.

But there’s an easier shortcut to get a snappy chocolate that, while not as shiny as properly tempered chocolate, gets the job done. I first learned of this method from Dan Souza, now the editor-in-chief of Cook’s Illustrated magazine — an entity that demystifies cooking via obsessive tinkering.

Once it is, you can dip your candies into the chocolate and allow it to fully set just like properly tempered chocolate. In the case of my Homemade Butterfinger Bites, I take further insurance on their look by adding a pinch of flaky sea salt to their tops while the chocolate is still warm. That way, if the chocolate does bloom slightly, the salt will cover up most imperfections on the top.

And if that’s still too much of a deal-breaker, you can use chocolate candy melts. Candy melts are a mix of sugar, oil, cocoa powder and soy lecithin (a stabilizer) that allow you to easily melt and cool them without having to worry about blooming or the coating not setting firm and snappy as you would in dealing with real chocolate. But, I won’t lie to you — the hydrogenated palm oil in candy melts, sometimes also called “almond bark,” is not a great thing to eat from a sustainability standpoint. The production of refined palm oil — not to be confused with red palm oil — has contributed to the exploitation of labor, deforestation and habitat destruction where it’s grown. And then there’s the cloying, fake taste brought on by the oil, stabilizers and the higher amount of sugar used in candy melts versus regular chocolate.

But if you want to use it, I suggest seeking out ChocoMaker Natural’s dark or milk chocolate candy wafers. I found this brand easily at craft stores, and it doesn’t use hydrogenated oils, which have been shown to increase bad cholesterol, a factor that contributes to heart disease. The brand also touts itself as 100% natural and non-GMO. The taste is passable, especially since you’ll be using a relatively tiny amount on each piece of candy. So if you’re too overwhelmed with attempting chocolate tempering and want the reassurance and ease of candy melts, they’re there for you to use at your discretion. 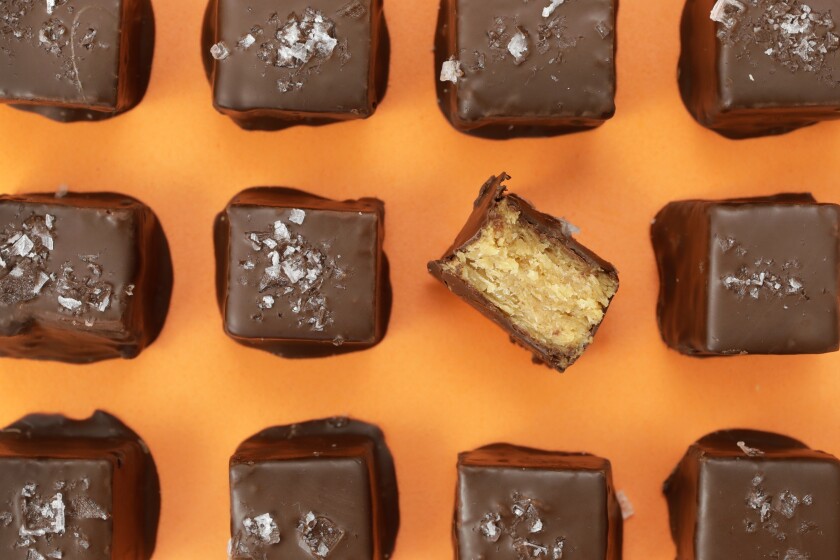