Thanksgiving in 2020 is going to look a lot different this year in more ways than one. So instead of doing things the way they’ve always been done, here are recipes that throw tradition out the window — at least just this once — and play around with the expected holiday tropes. You’ll see that the classic dishes can be much easier — and more fun — when you focus on highlighting the qualities in each that really matter.

Pumpkin pie is, as Martha Stewart would say, a good thing. But I find it’s always hindered by one of its seemingly essential elements: the crust. I’ve been known to scrape the pumpkin filling from a wedge of mediocre crust but never vice versa. So when I wanted to create a pumpkin pie-like dessert for Thanksgiving, free of its pastry shackles, I knew right where to turn.

For my partner’s birthday over the summer, I wanted to make him a different chocolate cake than his typical sheet cake request. While reading through old cookbooks, I came across the “Chocolate Nemesis,” a cake in “The River Cafe Cook Book,” and made it for him. It was a resounding success, the texture halfway between a flourless chocolate cake and chocolate custard. So when discussing the crustless pumpkin pie, we both exclaimed, “pumpkin nemesis!”

But what started out as that simple premise became exceedingly complicated and disastrous once I put it to the test. The first test — simply making the chocolate nemesis by swapping canned pumpkin for the chocolate — was a success and possessed a light and fluffy custard texture. But the ensuing tests where I set about to correct some small issues — a layer of separated custard on the bottom, tearing on the top when unmolding the cake — yielded worse and worse disasters. The cake was quickly becoming my nemesis in more ways than one.

After several trials and incalculable errors — unlike the original, the eggs don’t need to be whipped at all and the consistency of the sugar syrup is the most important aspect — I came to learn more lessons about making this dessert than I ever wanted to know. The endeavor was worthwhile to achieve a light, custardy pumpkin dessert that highlights the real star — the filling. All the sweat and tears made up for the fact that, in the end, the effort resulted in a truly great thing. 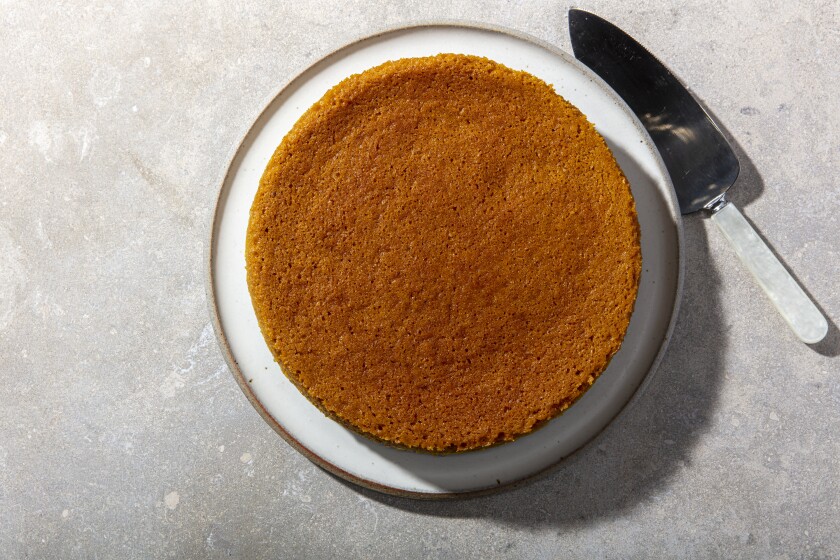