Airbnb wins the vote in San Francisco, but city’s housing debate rages on

Measure F, the San Francisco ballot measure that sought to toughen regulation of short-term rentals, was always seen as being about more than Airbnb and other services.

To many in the city, it was something of a referendum of San Francisco’s housing crisis, which has been fueled by the tech boom.

An influx of tech workers and a lack of housing have driven the median price of a one-bedroom apartment to $4,000 a month. Lower-income residents complain they are being pushed out amid the boom.

Airbnb wins in San Francisco, and so does Mayor Ed Lee

“When people can’t afford to live in the city, it just changes overnight,” Michael Reiner, 24, said. “I think it’s the defining issue for the city.”

Opponents of Measure F said that Airbnb and other short-term rental services were a tiny part of the housing problem and that this aspect of the sharing economy was being scapegoated.

On Tuesday night, they won when the measure was defeated by a wide margin: 55% to 45%.

What was the geographic breakdown of the vote? 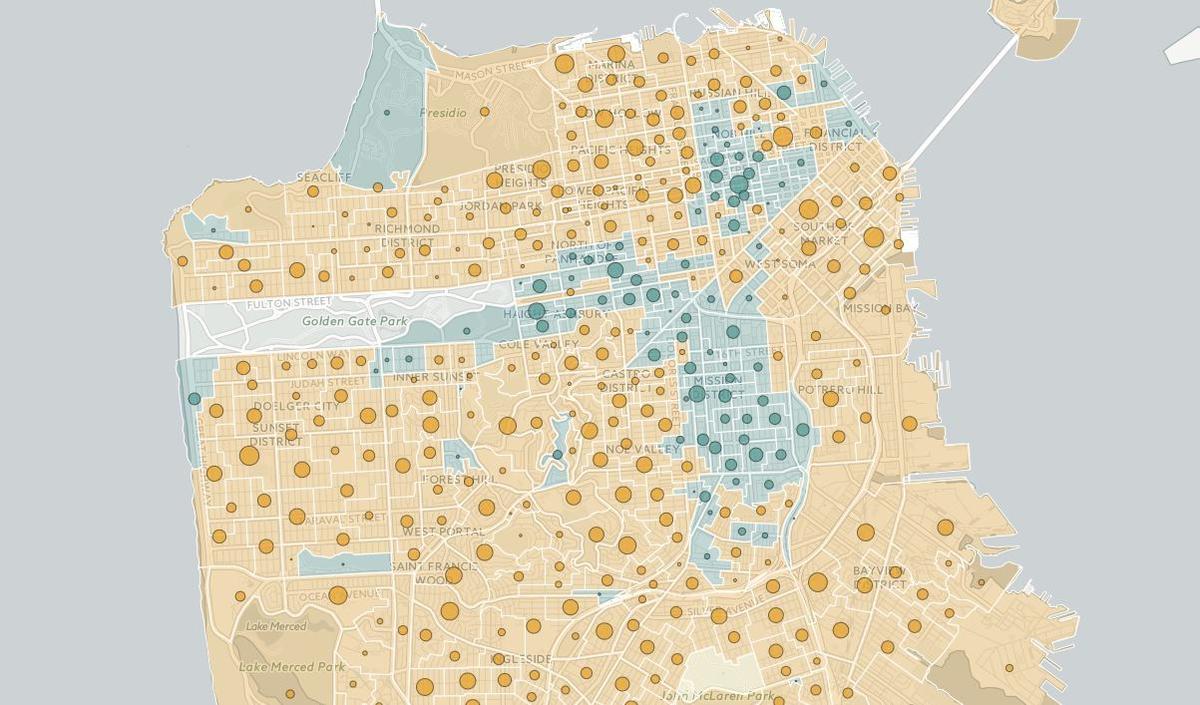 According to a Times map, parts of the city most impacted by the housing crisis — such as the Mission District and surrounding areas — supported Measure F in the greatest numbers. The measure also did well in the Chinatown area.

What would Measure F have done?

The measure would have capped rentals at 75 days a year, regardless of whether they are hosted (meaning that the resident is at home during the renter's stay). Current city law limits rentals to 90 days a year for unhosted rentals, while hosted rentals face no such limit.

Proposition F also would have allowed “interested parties” such as neighbors or landlords to sue short-term rental companies such as VRBO and Airbnb if they violate the new rules.

How much did both sides spend?

Airbnb raised more than $8 million to oppose Proposition F and put up a series of controversial billboards that touted the $12 million the company has generated in city hotel tax revenue. Supporters of the measure raised about $800,000.

What did Measure F supporters say?

To backers, the measure was about more than just rental law; it was about the soul and future of the city.

“I’ve been a resident of San Francisco for 28 years, and I’m a tenant, and the woman [who owns the] building next to me took six vacant apartments and put them all on Airbnb,” said Nob Hill resident Charles Stegiel, 58, who voted in favor of Proposition F. “I just felt that that’s class warfare against me. I’m a tenant. I don’t have staggering sums of money. I have a studio apartment. If I lose my studio, where am I going to go?”

Olivia Xue, a retiree who has lived in San Francisco for 15 years, also voted in favor of Proposition F.

“I accept new things,” she said, noting that she doesn’t have a problem with new platforms and technologies, and is considering using Airbnb for an upcoming trip to China. “But at this time, I think we need to control what’s happening.”

How about Measure F opponents?

Russian Hill resident Gary Hermansen, 59, rents his property to long-term tenants but has previously listed a unit on VRBO. He voted against Proposition F, calling the idea “hollow.”

“Everyone loves using Airbnb, and they’ll say they always use Airbnb no matter where they go — as long as it’s not in their neighborhood,” he said. “I have a problem with that kind of thinking.”

He said he understood the concerns people have about apartment buildings increasingly feeling like hotels, but he criticized the proposed regulation for having a shortsighted view.

Restrictions such as Proposition F cause “unnatural” things to happen, Hermansen said.

How is Los Angeles dealing with short-term rental regulations?

The city is debating a plan that would allow people to rent out a home or apartment for short stays if it is their primary residence, but prohibit such rentals if it is not.

A Times analysis found short-term rentals in the L.A. area tend to be clustered in parts of Silver Lake, Venice, downtown, Hollywood and Westside.

Some residents complain that L.A. is not doing enough to enforce laws against people who are illegally renting out their homes.

Everything you need to know about San Francisco's Airbnb ballot measure

Matt Hamilton is a reporter for the Los Angeles Times. He won the 2019 Pulitzer Prize for investigative reporting with colleagues Harriet Ryan and Paul Pringle and was part of the team of reporters that won a Pulitzer Prize for its coverage of the San Bernardino terrorist attack. A graduate of Boston College and the University of Southern California, he joined The Times in 2013.