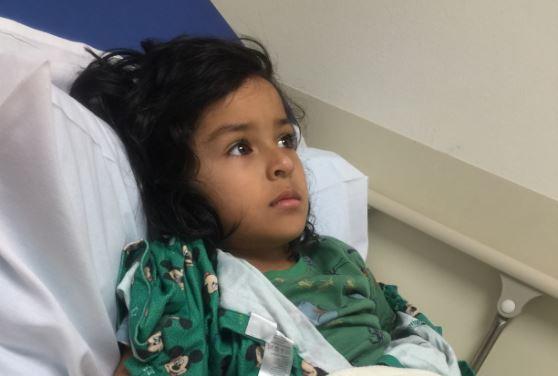 A San Francisco woman credits those three words -- the last words of San Bernardino shooting victim Shannon Johnson -- for helping to comfort her panicked 5-year-old daughter while she underwent an MRI.

Diana Rohini LaVigne found strength in Johnson’s words when her daughter Anoushka became suddenly ill. After 12 hours of testing couldn’t determine what had led to the ongoing bout of sickness and unconsciousness, Anoushka wound up inside an MRI machine. That was when her mother searched for words to calm the child.

“At some point, you pull from whatever you know. And I started thinking, I need to be the hero at this point. I thought of Shannon, and the words came to me,” she said.

“I got you,” she repeated to her daughter.

“This man who is no longer living is still impacting people’s lives. It might seem like a very small thing, because it was just an MRI test. But for me, it was everything,” LaVigne said.

On Dec. 2, as two armed assailants stormed an office holiday party, Johnson wrapped his arm around his co-worker Denise Peraza and comforted her with his final message. Peraza survived the attack, and has since recounted the actions of her hero.

LaVigne says her daughter is healthy, and that the tests did not find any severe problem. But her anecdote illuminates the countless ways that the lives and actions of the San Bernardino shooting victims are resonating with people.

“It gives you a shimmer of light in the grimmest, darkest moments of humanity,” she said.

LaVigne posted a message to her Facebook page shortly after the event. You can read it here.

How has the San Bernardino shooting affected or inspired you? Tell us in the comments below, or email colleen.shalby@latimes.com.