After four parched years, most California voters seem to be taking the drought in stride, saying it has had little to no effect on their daily lives. They oppose sacrificing environmental protections to expand water supplies and generally approve of how Gov. Jerry Brown has handled the crisis, according to a new statewide USC Dornsife/Los Angeles Times poll.

The poll results suggest that California has proved remarkably resilient during one of the worst droughts on record — one that prompted Brown to impose the state’s first-ever mandatory restrictions on urban water use.

The mandate this spring didn’t hurt Brown. Approval ratings of his handling of the drought rose to 50% from 39% in May 2014.

The USC Dornsife College of Letters, Arts and Sciences/Los Angeles Times poll, conducted by telephone Aug. 29-Sept. 8, found that a vast majority of California voters consider the drought a crisis or major problem. Yet despite brown lawns, idled cropland and plummeting reservoir levels, only 35% said their daily lives had been seriously affected.

They spread around the blame for the state’s water supply problems: Foremost, they cited a lack of rain and snow, followed by old delivery systems and insufficient storage, people using too much water, growth, climate change, environmental regulations and agricultural use.

Water and Power is The Times’ guide to the drought. Sign up to get the free newsletter >>

When it comes to solutions, recycling, capturing storm runoff, storing water in aquifers and seawater desalination were the most popular, garnering at least 80% support. Building new dams and reservoirs was backed by 69%. 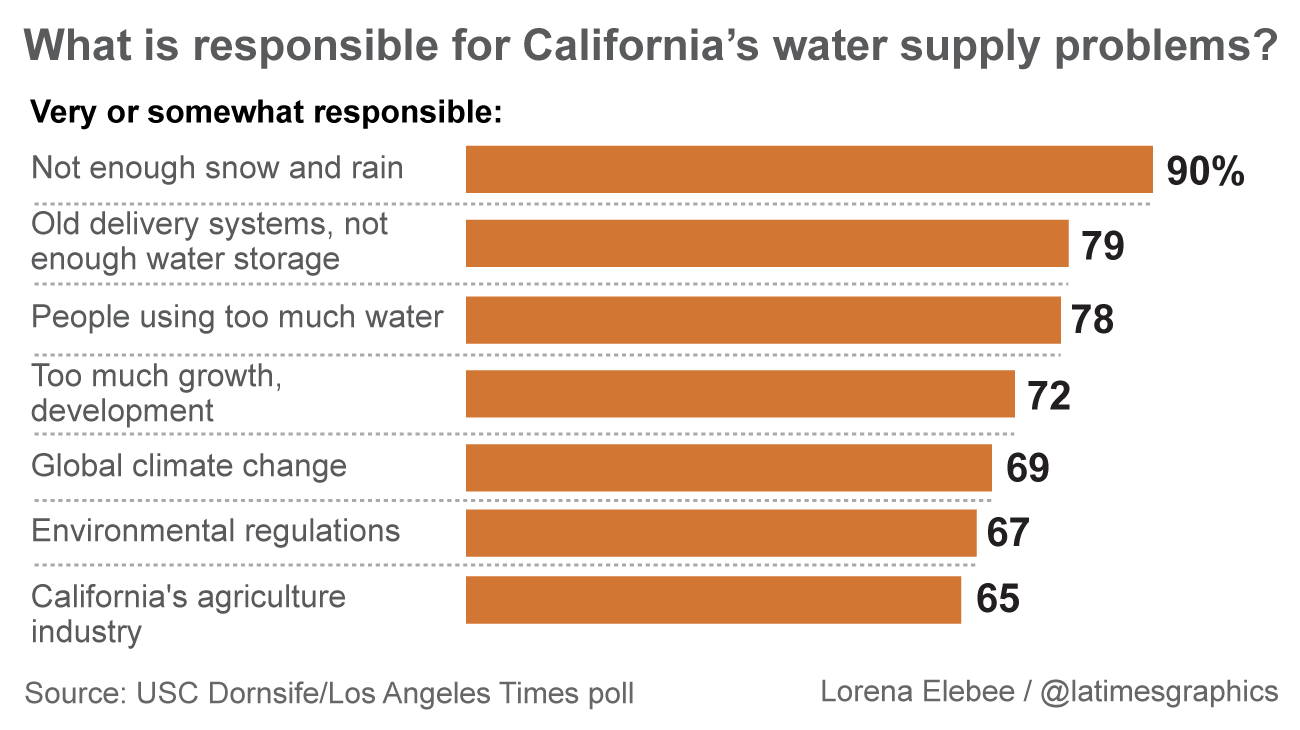 “Voters are looking for all of the above solutions as long as all of the above solutions do not raise costs for them personally,” said Republican pollster David Kanevsky of American Viewpoint, which conducted the bipartisan survey of 1,500 registered state voters with the Democratic firm Greenberg Quinlan Rosner Research. The margin of error is plus or minus 2.8 percentage points, higher for subgroups.

“Given all the investments they want to make to ensure long-term water supply, the job for elected officials is to understand the investments in essence will raise costs,” Kanevsky added.

The prolonged drought has highlighted the fact that roughly three-quarters of Californians’ water use is by agriculture, which also holds many of the oldest water rights in the state.

Criticized by some for leaving agriculture out of the water-use restrictions issued this year, the Brown administration has pointed out that federal irrigation deliveries were slashed to zero in some parts of the Central Valley for two years in a row. Growers also have had to absorb the expense of drilling new and deeper wells to make up for lost deliveries.

But the poll found a growing backlash against agriculture’s enduring thirst. The percentage of voters who said farmers should be required to reduce their water use jumped to 53% from 37% a year ago, a shift that Greenberg pollster Drew Lieberman called “huge.”

“People are now in a place where they look around and say we’re doing our part.… It doesn’t necessarily look like there’s an end in sight, and it’s time for other people to step up,” he said.

Mark Woo, 52, a public policy consultant, was among those survey respondents who support cuts to farmers.

“What can the state sustain between urban use, agricultural use and environmental use?” he wondered.

He isn’t just pointing a finger elsewhere. In the last year, Woo said, he, his wife and two teenage sons have pruned their daily household water use to less than 30 gallons per person.

The family’s small lawn in the Bay Area community of Kensington is dead. Woo keeps his shrubs and trees alive with water from the bathtub and shower.

“I know I’m well below what I’m required and expected to do,” he said. “But I really feel if we can … try and do as much as we can, it’s so important because in the long run, preserving water for the environment is really key as opposed to me watering my yard.”

The percentage of those who said the drought had seriously affected them and their families rose to 35% from 22% a year ago and 16% in May 2014. The percentage who said it had a minor impact remained essentially flat at 50%.

Methodology: The USC Dornsife College of Letters, Arts and Sciences/Los Angeles Times poll of 1,500 registered state voters was done by telephone Aug. 29-Sept. 8. The bipartisan survey was conducted by Greenberg Quinlan Rosner Research, a Democratic company, and American Viewpoint, a Republican firm. The margin of error is plus or minus 2.8 percentage points, and is higher for subgroups.

Almonds are no longer villains — or scapegoats — of the drought

Less water might be plenty for California, experts say, and conservation is only the start

Bettina Boxall covered water and the environment for the Los Angeles Times before retiring in 2021 after 34 years at the paper. She shared the 2009 Pulitzer Prize for explanatory reporting with colleague Julie Cart for their five-part series on the causes and effects of escalating wildfire in the West.