Story So Far: What happened to Sandra Bland before she died in a Texas jail?

On July 9, Sandra Bland was all smiles.

The 28-year-old Illinois native made a series of excited phone calls to friends and family, celebrating what she thought was a successful interview for a job at Prairie View A&M University in Texas, her alma mater.

On July 10, Bland made a very different phone call from inside the Waller County jail in Hempstead, Texas. She’d been “roughed up” by a police officer, she told a close friend.

By July 13, Bland was dead. She’d been found hanged inside her jail cell in what officials described as a suicide.

Bland’s jailhouse death, and the arrest that placed her in a cell in the first place, have come under intense scrutiny as family members and friends have said the woman had no reason to kill herself. The circumstances of her arrest and death — which include a police video that contained mysterious skips and repeats, as well as an autopsy report suggesting Bland may have tried to harm herself in the weeks before she died — have left many scratching their heads.

Who was Sandra Bland, and why was she in Texas?

Bland was born and raised in Naperville, Ill., a suburb of Chicago. A bright-eyed social justice advocate, she studied agriculture at Prairie View A&M, the historically black university where she interviewed for a job this month.

Bland also was a member of the Sigma Gamma Rho sorority and the school’s marching band. Family members said she was extremely excited about the chance to return to her alma mater as an outreach coordinator.

“I know what my purpose is,” Bland had said as she planned to travel to Texas, according to her mother. “My purpose is to go back to Texas and stop all social injustice in the South.”

What happened during Bland’s July 10 arrest? 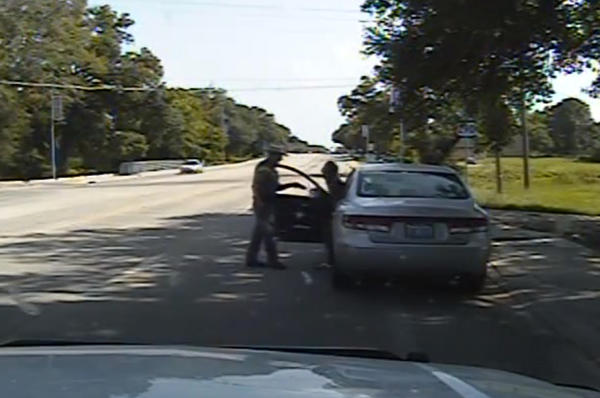 A video, shot from the dashboard camera inside a police cruiser, initially shows a routine traffic stop. Encinia asks for Bland’s license and registration and she complies. But when he returns to Bland’s car and asks her to extinguish her cigarette, the interaction turns into a tense confrontation.

Encinia tells Bland to exit the car when she refuses to put out her cigarette. A verbal tug-of-war ensues as Encinia repeatedly yells for Bland to step out of the car and she refuses, demanding to know why.

As the argument continues, Encinia appears to draw his stun gun.

“I will light you up. Get out. Now. Get out of the car,” he shouts in the video.

Encinia handcuffs Bland mostly off camera, but the recording captured audio of a shouting match between them. Bland can be heard screaming obscenities at Encinia, demanding to know why she is being arrested. A scuffle ensues out of sight, with Bland screaming that Encinia is about to break her wrists. She then cries out that Encinia slammed her to the ground and she hit her head.

In an arrest affidavit, Encinia wrote that Bland kicked him. She was booked on suspicion of assaulting a public servant, a felony, and held in lieu of $5,000 bail.

What do police say happened in the Waller County jail?

Despite her family’s claims to the contrary, Texas investigators have repeatedly described Bland’s death inside the Waller County jail as a suicide.

Medical examiners did find 30 cuts on Bland’s left wrist. The state of healing and scabbing around each wound suggested the cuts may have been inflicted several weeks before Bland was jailed.

What does Bland’s family say happened in the jail?

Bland’s loved ones have repeatedly rejected the idea that the 28-year-old committed suicide. But they have little explanation for what happened.

Family lawyer Cannon Lambert has repeatedly called for an independent investigation. Lambert and Bland’s relatives have noted inconsistencies in several statements released by police, and they have expressed grave concern over a gap in the jailhouse video from the final hours before she was found dead.

Six minutes of footage, from 7:18 a.m. to 7:24 a.m., are missing. The gap came immediately after an officer last checked on Bland. Waller County Dist. Atty. Elton Mathis, who released the video, said the camera’s motion sensor is to blame for the gaps.

LaVaughn Mosley, a 57-year-old Prairie View resident and longtime friend of Bland’s, spoke to her at the jail the day before she died. Bland called Mosley from jail on July 10, saying that she had been “roughed up” by police and that she planned to pursue charges against the officer, he told The Times.

Friends and family said there was no evidence that Bland had been treated for depression or that she had committed suicide. They also pointed to inconsistencies in the booking documents, such as what year she allegedly tried to commit suicide and whether she was on medication for epilepsy.

On July 28, law enforcement officials released several hours of additional video from the jail’s surveillance cameras, meant to dispel rumors that Bland was abused or killed while in police custody.

The new footage shows Bland being processed and interviewed by jailers. Her belt was removed from her possession by jail employees, which is common law enforcement practice. The video also shows Bland making at least six phone calls during that time, though the recording does not provide sound.

The footage also shows Bland being escorted back to her cell, apparently uninjured, the morning of her death.

What is the status of the investigation?

Texas Rangers and the FBI are reviewing Bland’s arrest and death. Mathis, the local district attorney, said evidence could be presented to a Waller County grand jury by August, although it remains unclear what, if any, charges would be pursued.

Mathis also said a panel of attorneys who have no ties to the district attorney’s office will work alongside prosecutors to review evidence and make recommendations regarding what to present to a grand jury.

A toxicology report released July 27 confirmed initial reports that Bland had marijuana in her system when she died. Additional testing will be needed to determine the quantity of marijuana that was in Bland’s body, which could reveal whether she had used a large amount of the drug before her arrest or if she used marijuana while in jail.

The prosecutor said there was no evidence Bland used the drug while in custody.

What has happened to the officer who arrested Bland?

Encinia has been placed on administrative leave for violating department procedures and the Department of Public Safety courtesy policy, officials said. The department has not elaborated on the violations.

Why are people saying the footage of Bland’s arrest was tampered with?

After a year marked by high-profile claims of police brutality against unarmed black men and women, Bland’s case, and the recording of her arrest, have drawn intense scrutiny.

The video of Bland’s arrest was met with immediate skepticism after viewers noted there were multiple instances when the footage seemed to skip or repeat itself but the audio continued smoothly.

Texas officials said the recording was not edited and blamed the problems on trouble uploading the video. They then released a version of the video that is about three minutes shorter than the one they originally posted.

The second video appeared to show a continuous record of the July 10 roadside encounter that preceded Bland’s arrest in Prairie View.

What have experts said about the tactics Encinia used and the decision to arrest Bland?

They all agreed: He had the legal authority to ask her to step out of the car. It was less clear whether he could tell her to extinguish her cigarette. That, they said, depended on whether the cigarette was perceived as a threat.

Most agreed that given Bland’s belligerence and behavior, Encinia could have perceived her as representing a potential danger. But Seth Stoughton, a University of South Carolina law professor and former Florida police officer, said Encinia missed several opportunities to deescalate tension and should have explained in calmer tones what he was doing and why. Encinia’s initial demand for Bland to exit the car after she refused to put out her cigarette may have had more to do with ego than good policing, Stoughton said.

READ MORE: Can a police officer order you out of your car? Experts weigh in on Sandra Bland case