Early in 2015, Los Angeles artist Guadalupe Rosales launched an Instagram account that she began to fill with images from her youth. These included pictures of old friends from Boyle Heights and East Los Angeles, the neighborhoods in which she grew up. It also included mementos of her time in the 1990s party scene on the Eastside.

Rosales featured shots of her old copies of “Street Beat” magazine, which chronicled dance parties and DJs. And she posted photos of neighborhood party crews, groups of friends — bonded by music, often techno and house — who staged dances in warehouses, storefronts and backyards. This included her own crew, Aztek Nation.

In between, she included other images of neighborhood life: glamour shots, prom pictures, gang members throwing hand signs, girlfriends hanging out, moms with their kids. “I didn’t leave anything out,” she says. “I started mixing them and just laid it all out.”

Very quickly, other Angelenos began to supply Rosales with their own images — and “Veteranas and Rucas,” as the account is known, quickly became an Internet sensation. (It now has 115,000 followers and contains almost 3,000 photos, submitted by Latinos from all over Southern California.)

It has also become an all-consuming art project for Rosales — who has been gathering the material into a vast archive of Chicano youth culture that she has installed or presented in galleries and museums across the country (including the Vincent Price Art Museum in Los Angeles and the New Museum of Contemporary Art in New York).

Now the artist will be taking over the Instagram feed at the Los Angeles County Museum of Art, part of a six-week residency that will have her exploring the collection but also the world outside the museum.

“A lot will happen at the museum,” she says. “But I’m also looking at greater L.A. It might be things I see on the street, or something I want to do is studio visits.”

It’s the first time an artist has taken over LACMA’s Instagram feed. (In 2010, actor Rainn Wilson took over the museum’s Twitter feed.) And Rosales says she wants to do it in a way that keeps the art accessible to a wide range of audiences.

“I’m interested in mixing academia, but keeping it conversational,” she says. “I really want to approach this from a personal perspective, to talk about why something is important to me.”

The artist, who received her MFA at the School of the Art Institute of Chicago, was involved with the queer arts collective LTTR during a spell she spent in New York. As a result, she has long been interested in work that is collaborative and multidisciplinary.

During her time at LACMA, she is also interested in highlighting aspects of culture that don’t always get a lot of airtime in the mainstream — an interest that motivated her work with “Veteranas and Rucas,” which has transformed into an important historical record of ’90s Chicano youth.

“Archiving and preserving and talking about these materials,” she explains, “sometimes that can be more important than making a photo.”

In advance of her residency at the museum, which kicks off Wednesday, I met up with Rosales at LACMA, where we wandered around several of the museum’s galleries: Ancient Americas, Latin American art, Japanese art and a temporary exhibition of African sculpture. But rather than chat IRL (in real life), we decided to be totally Internet and exchange text messages and images instead. 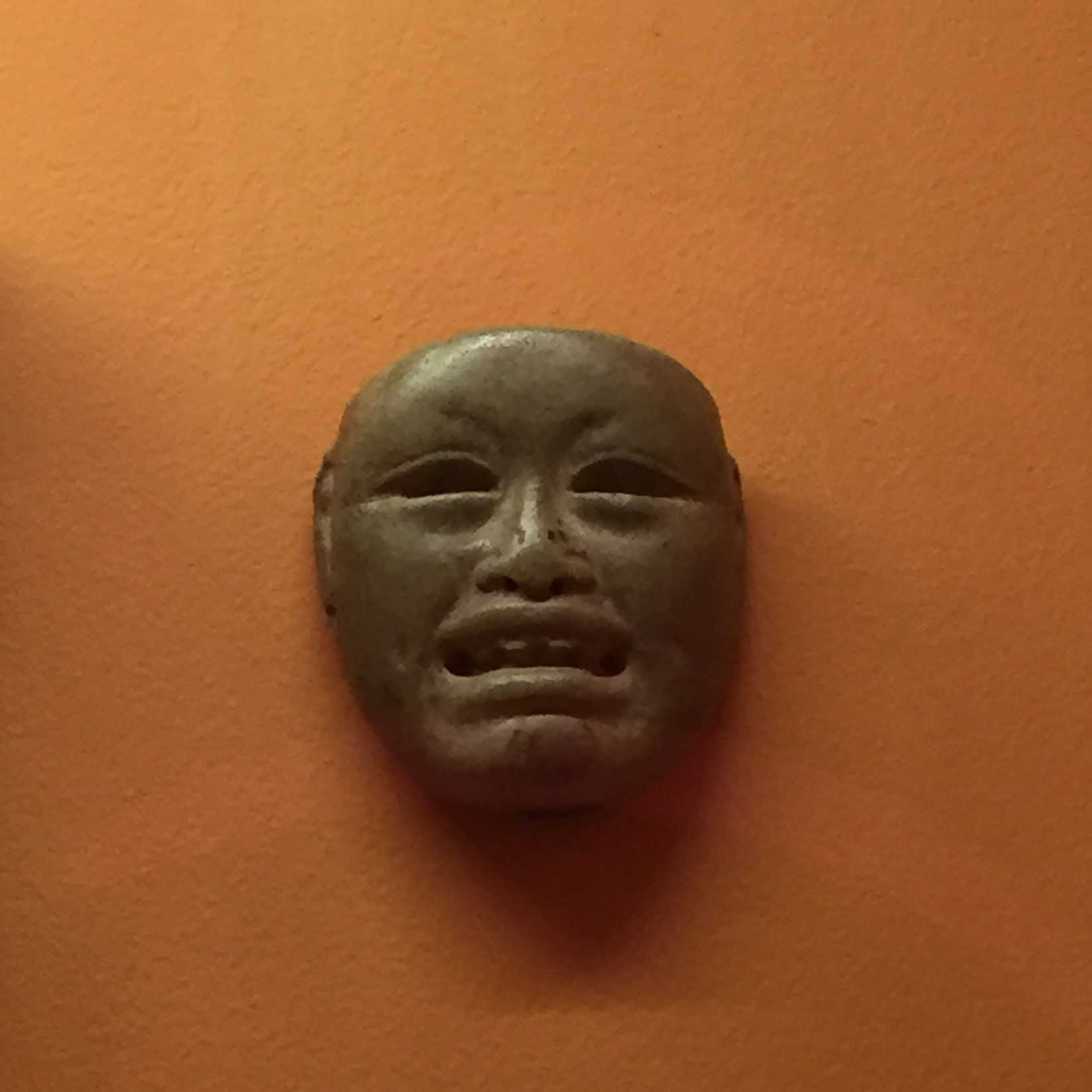 A pectoral of a human face made in the Olmec style in Guerrero, Mexico. 1000 to 600 BCE. (Guadalupe Rosales)

Back at ya with a cherub shruggie. 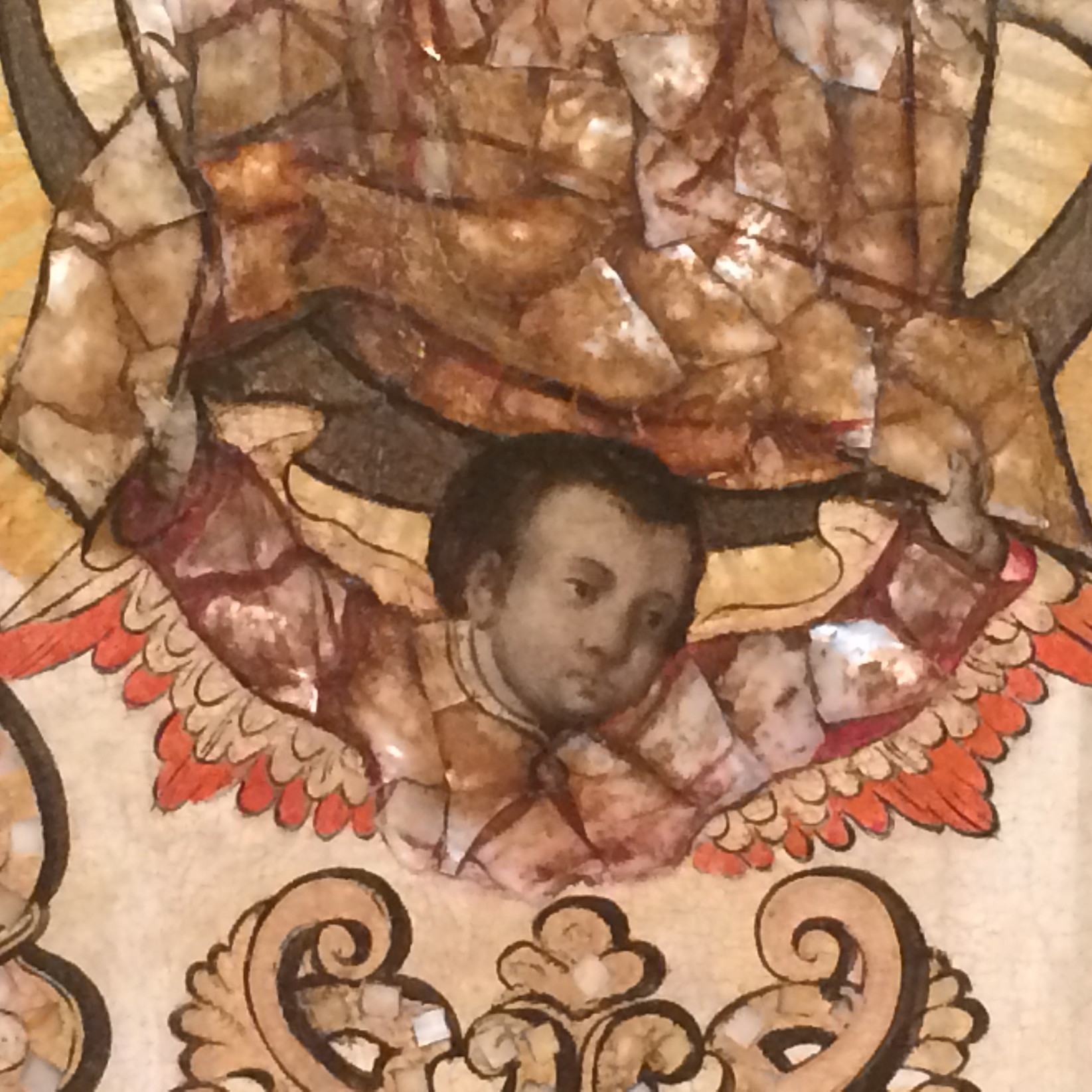 Did someone say house? Like house party or house music? 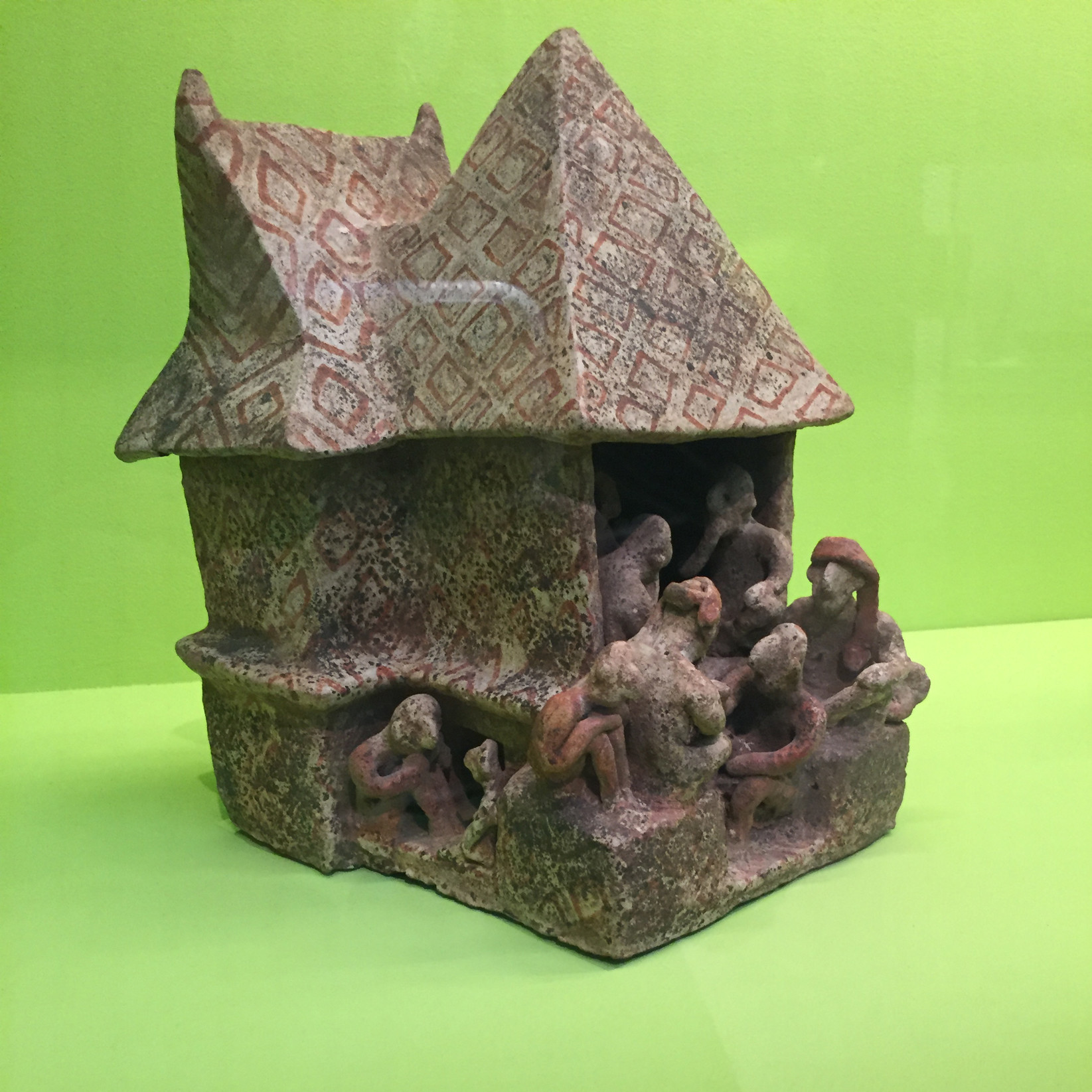 A pre-Columbian ceramic from the Mexican state of Nayarit (200 BCE to 400 CE) shows a house scene. (Guadalupe Rosales)

I gotta house party for you — 17th century Mexican style. 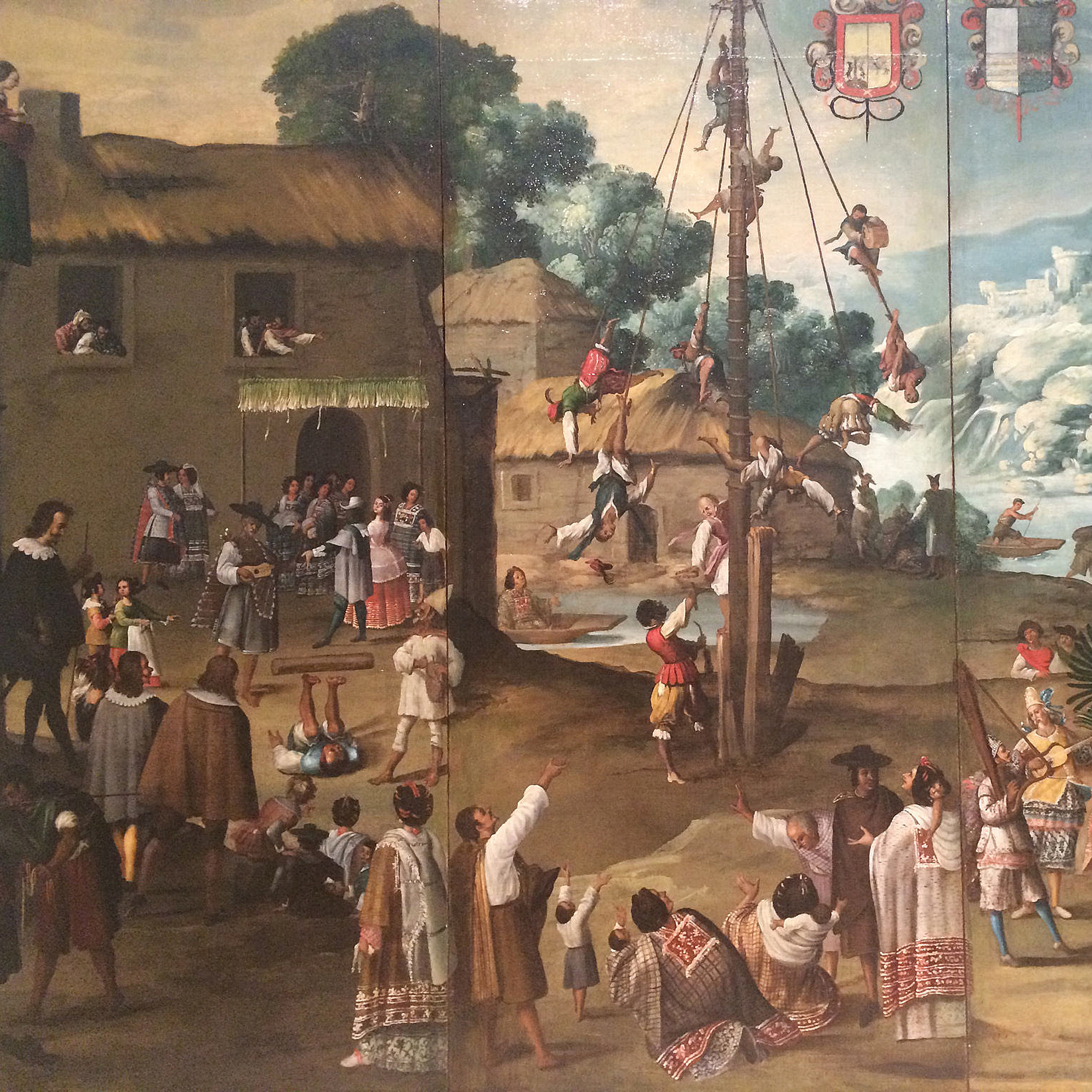 A detail from a Mexican folding screen from c. 1690 depicts an Indian wedding with flying pole. (Carolina A. Miranda / Los Angeles Times)

Woah! Entertaining at the wedding. 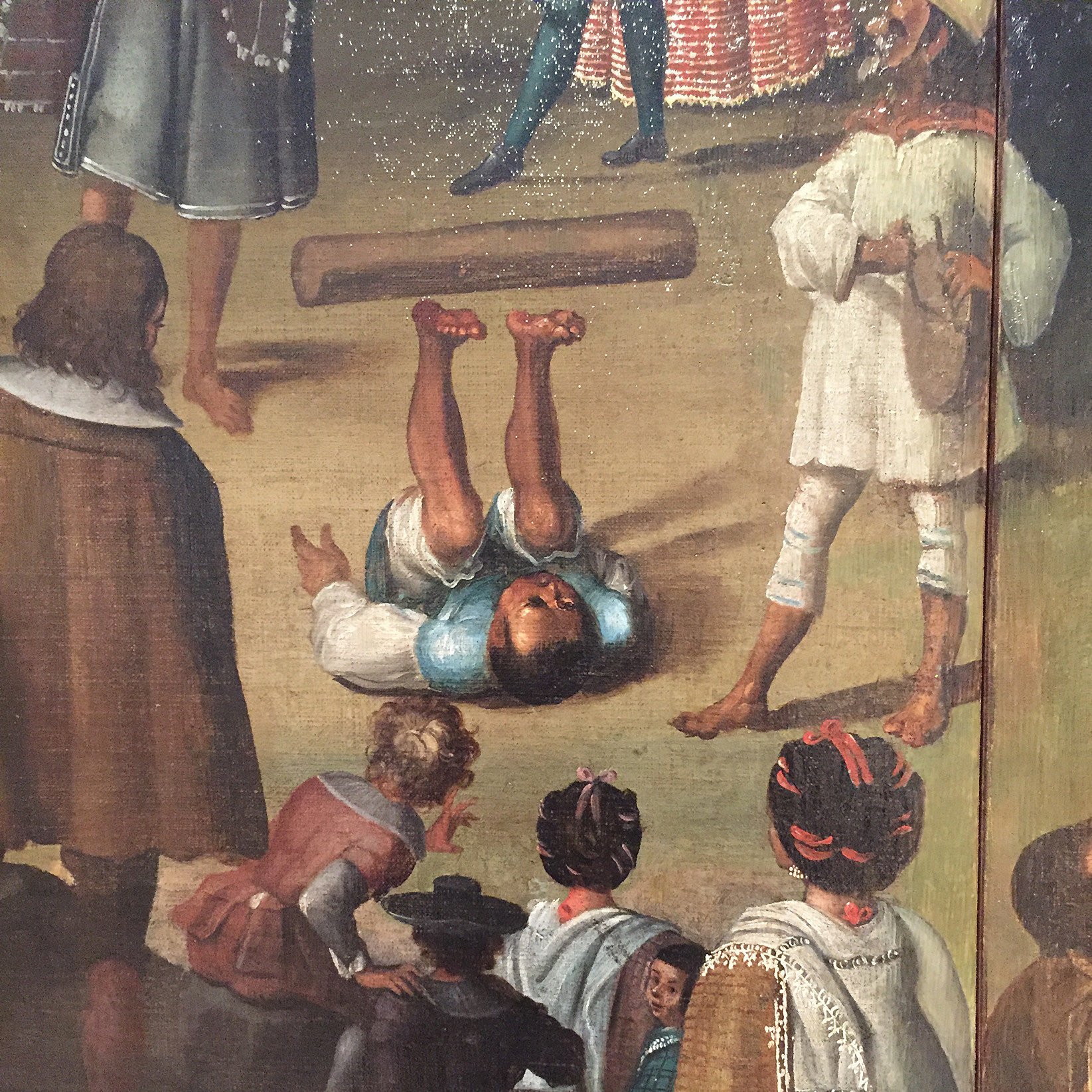 A close-up of the Mexican folding screen reveals a man juggling a log with his feet. (Guadalupe Rosales)

Still stuck on the wedding painting. Seeing lots of colonizers... 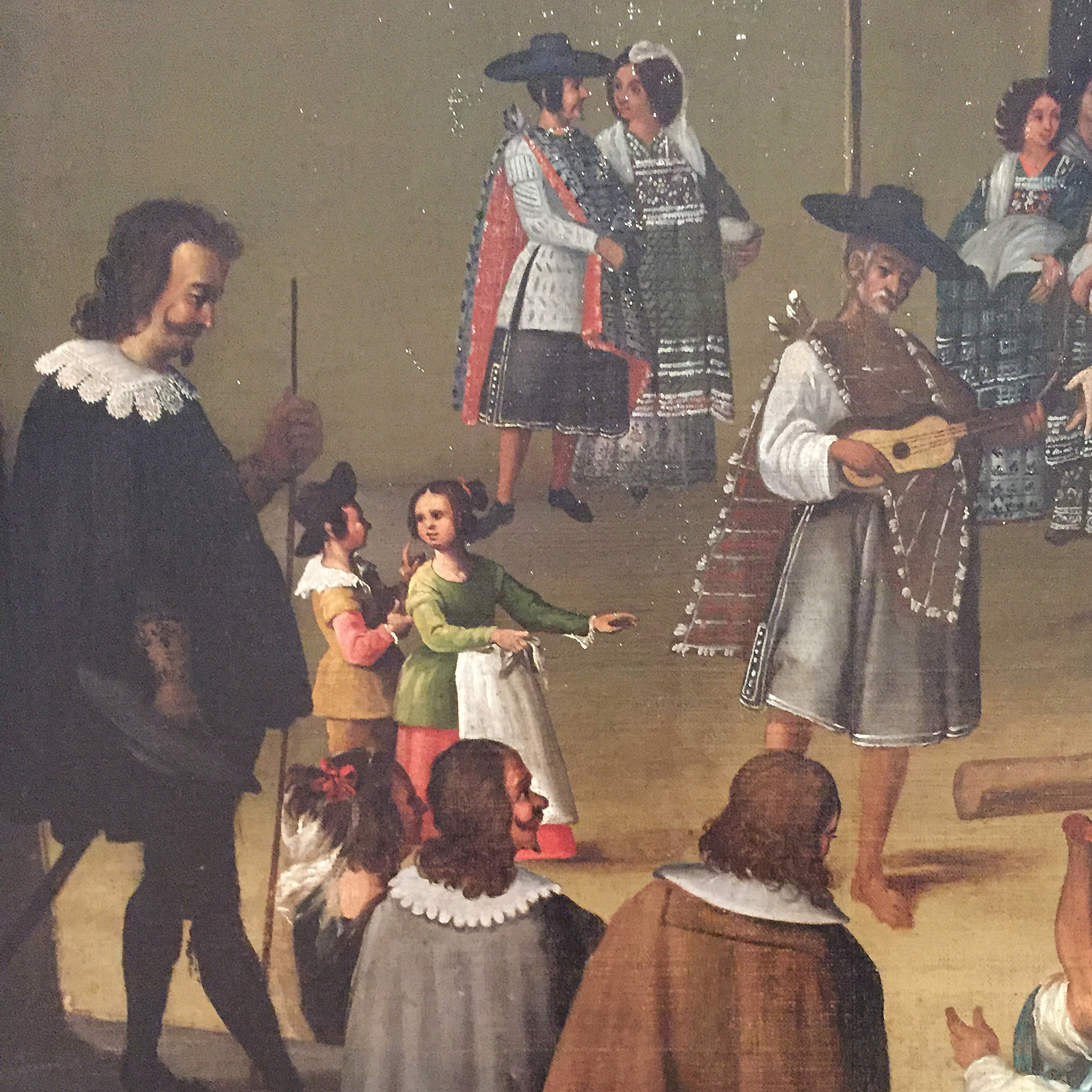 Some penance the day after the party — dude has major hangover, obvi. 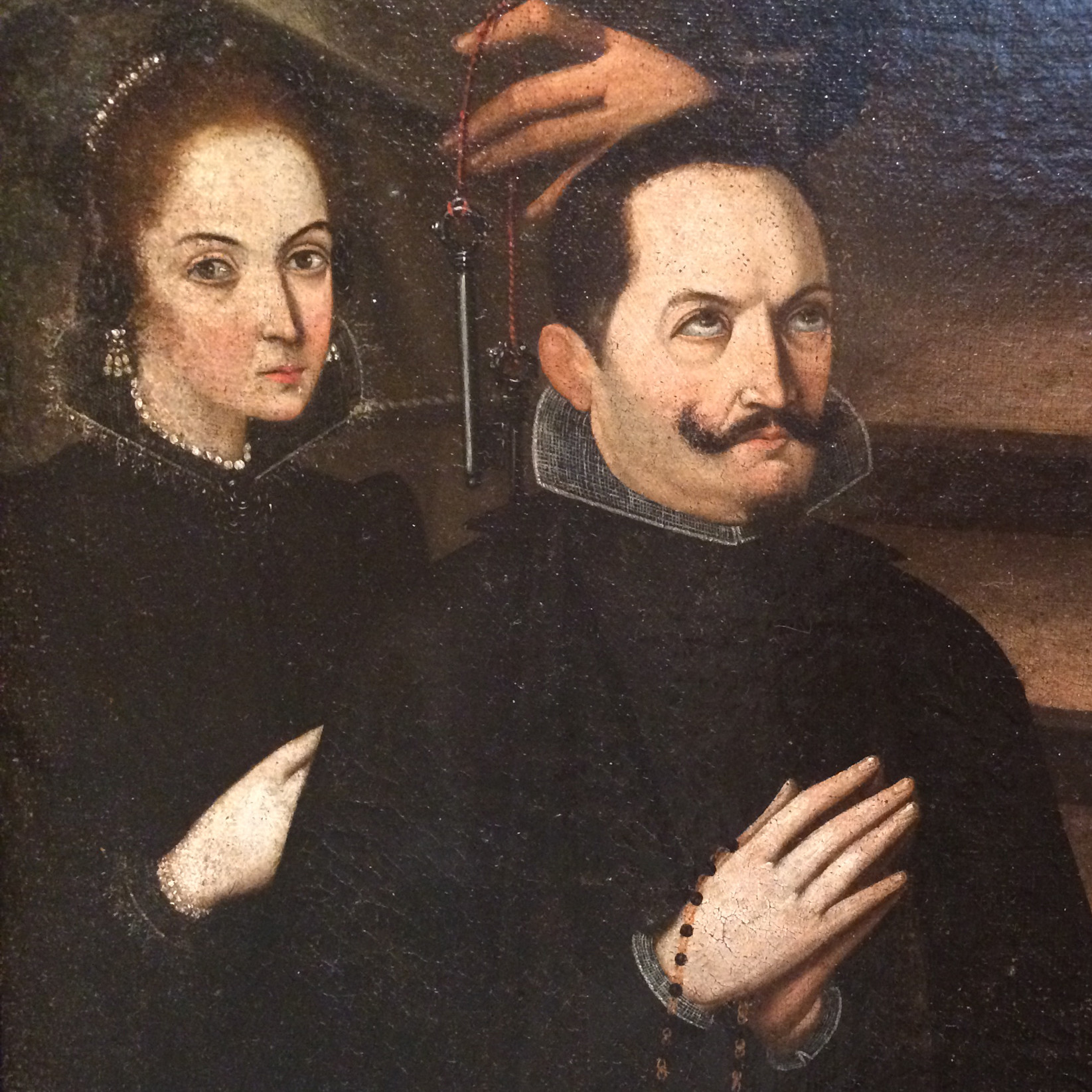 Donors pray before St. Francis of Assisi in a detail from a larger canvas by Antonio Montúfar, 1614-29. (Carolina A. Miranda / Los Angeles Times)

Not this beauty though. 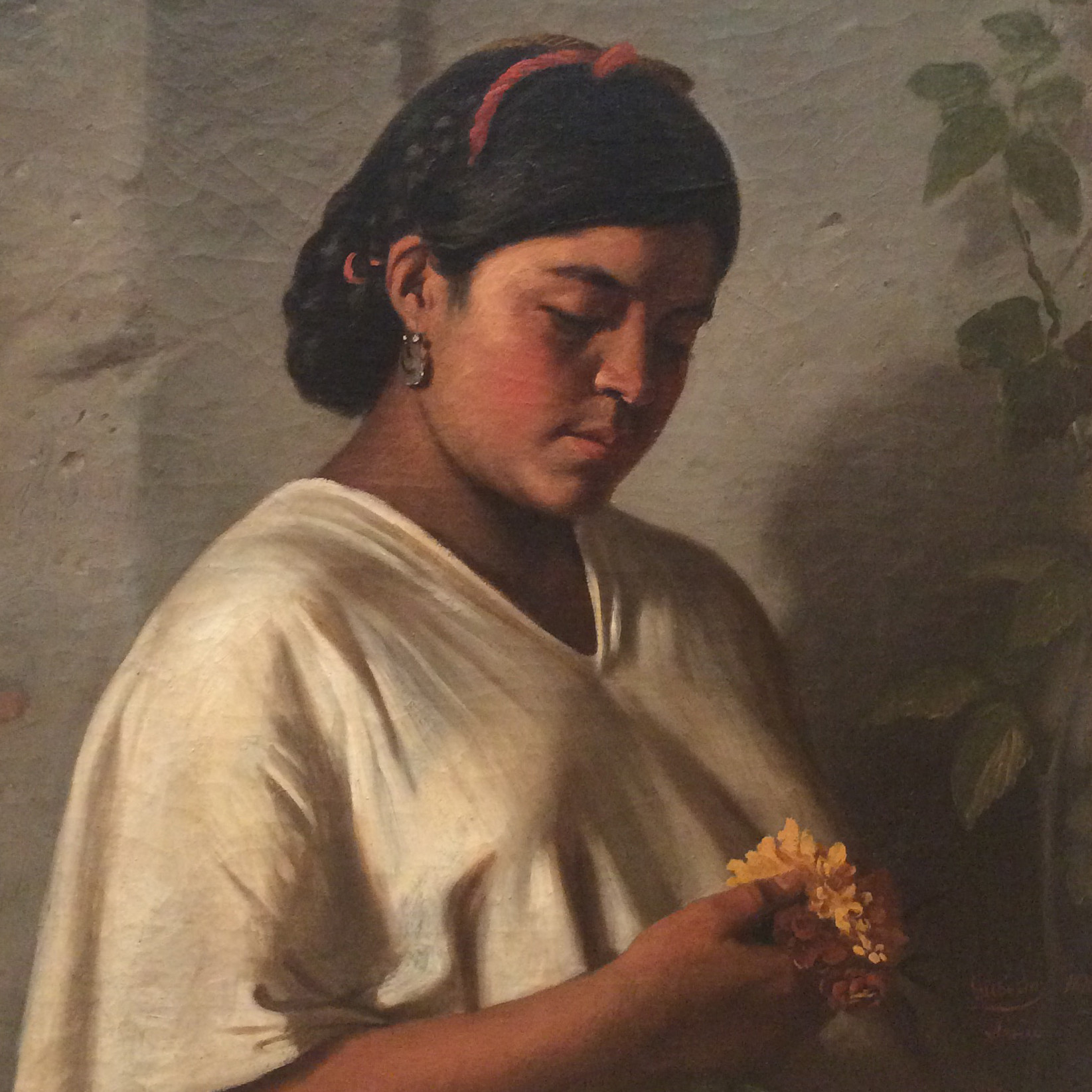 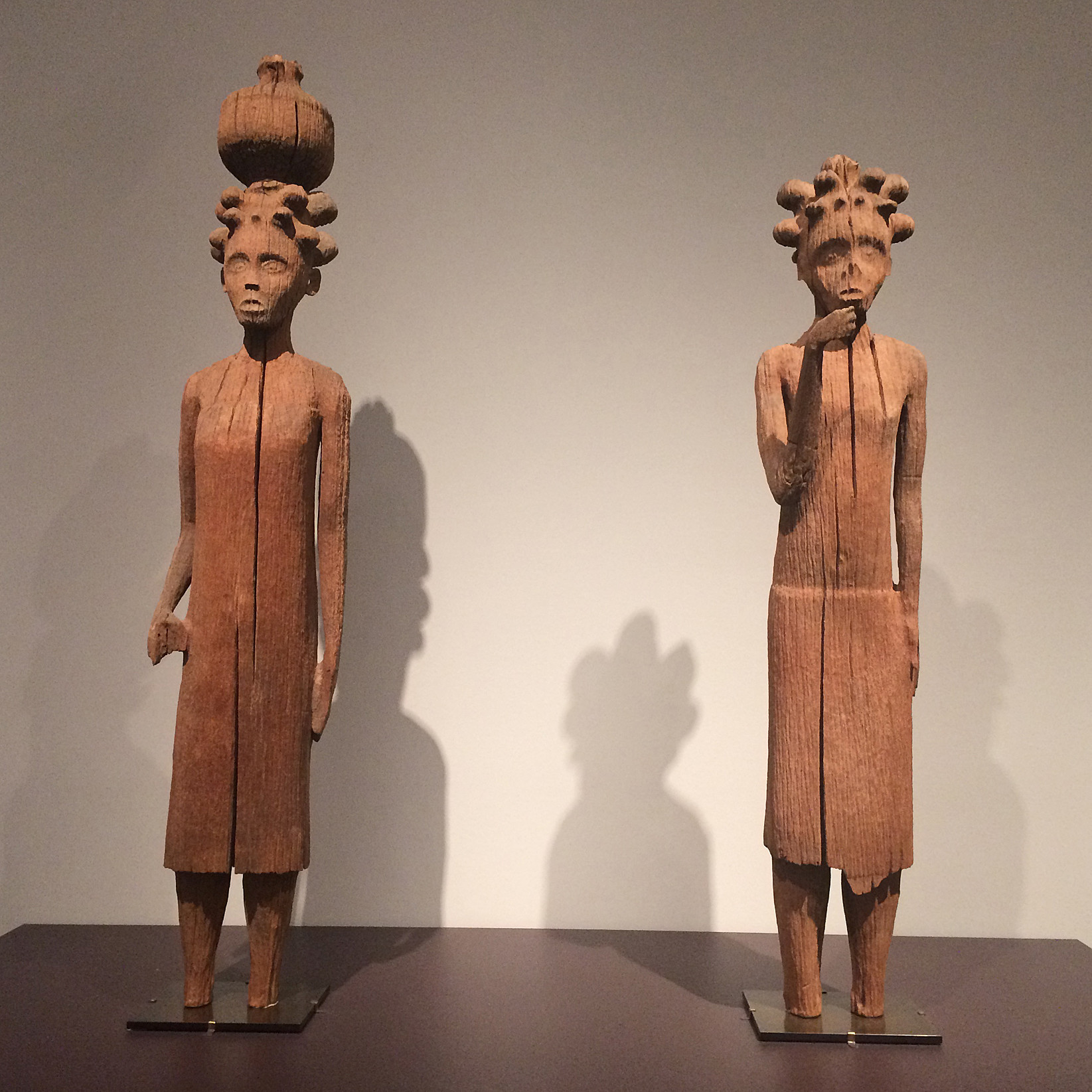 A commemorative female and male pair from the Sakalava culture in Madagascar, c. 1897, from the temporary exhibit "The Inner Eye: Vision and Transcendence in African Arts." (Carolina A. Miranda / Los Angeles Times) 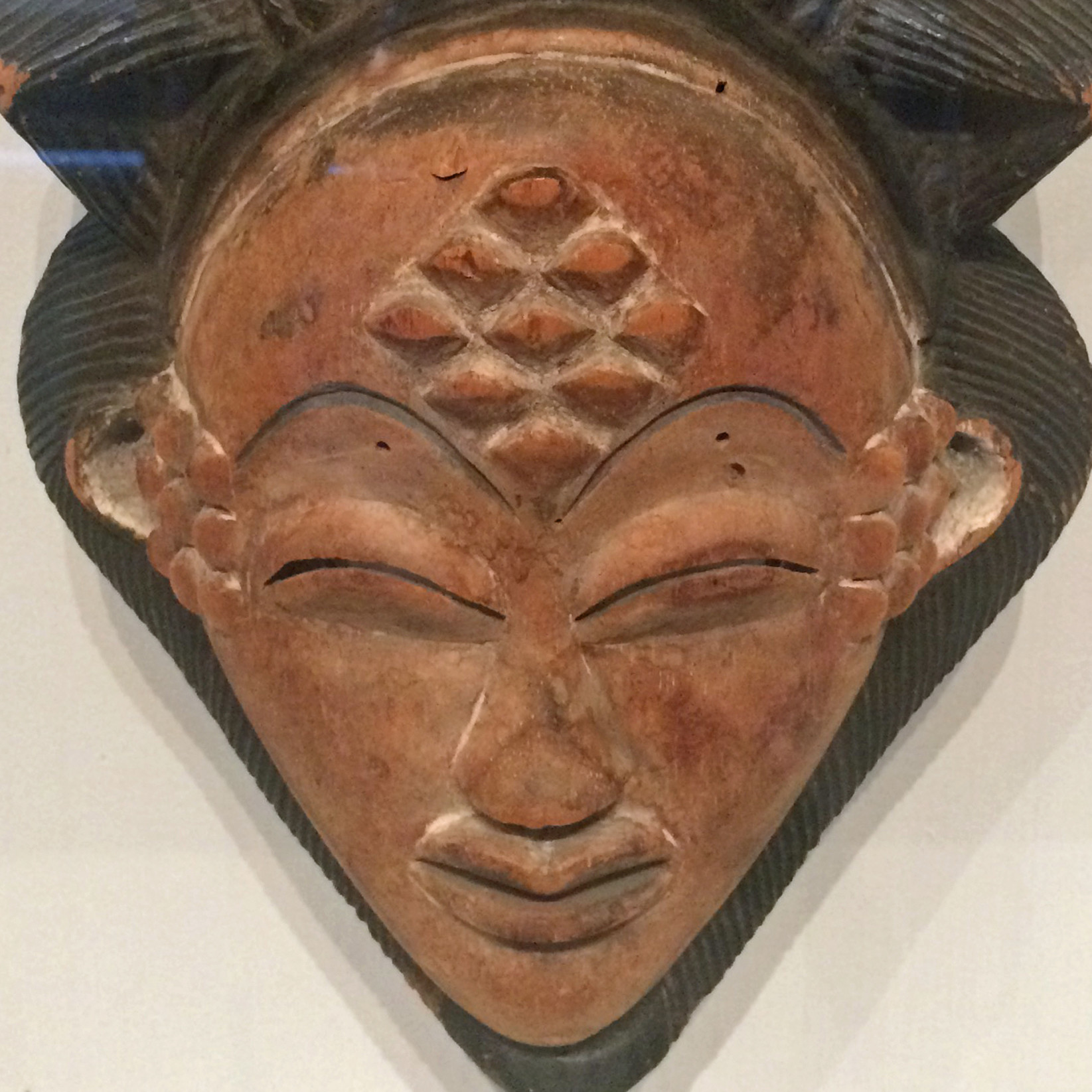 A "mukudj" mask from the Punu culture in Gabon from the 19th century, on view in "The Inner Eye." (Guadalupe Rosales) 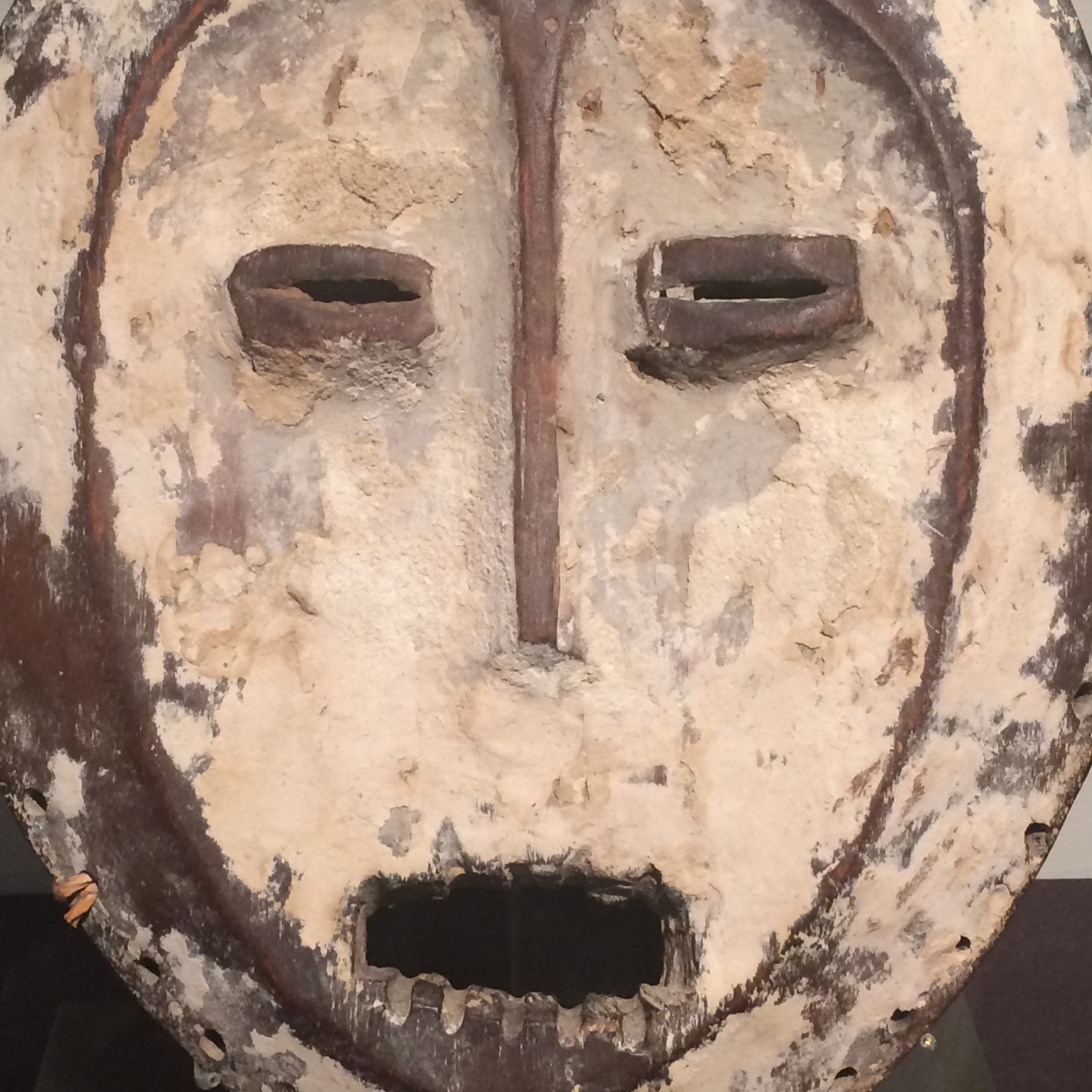 A mask of the Lega culture from the Democratic Republic of Congo, c. 1860, also in "The Inner Eye." (Carolina A. Miranda / Los Angeles Times) 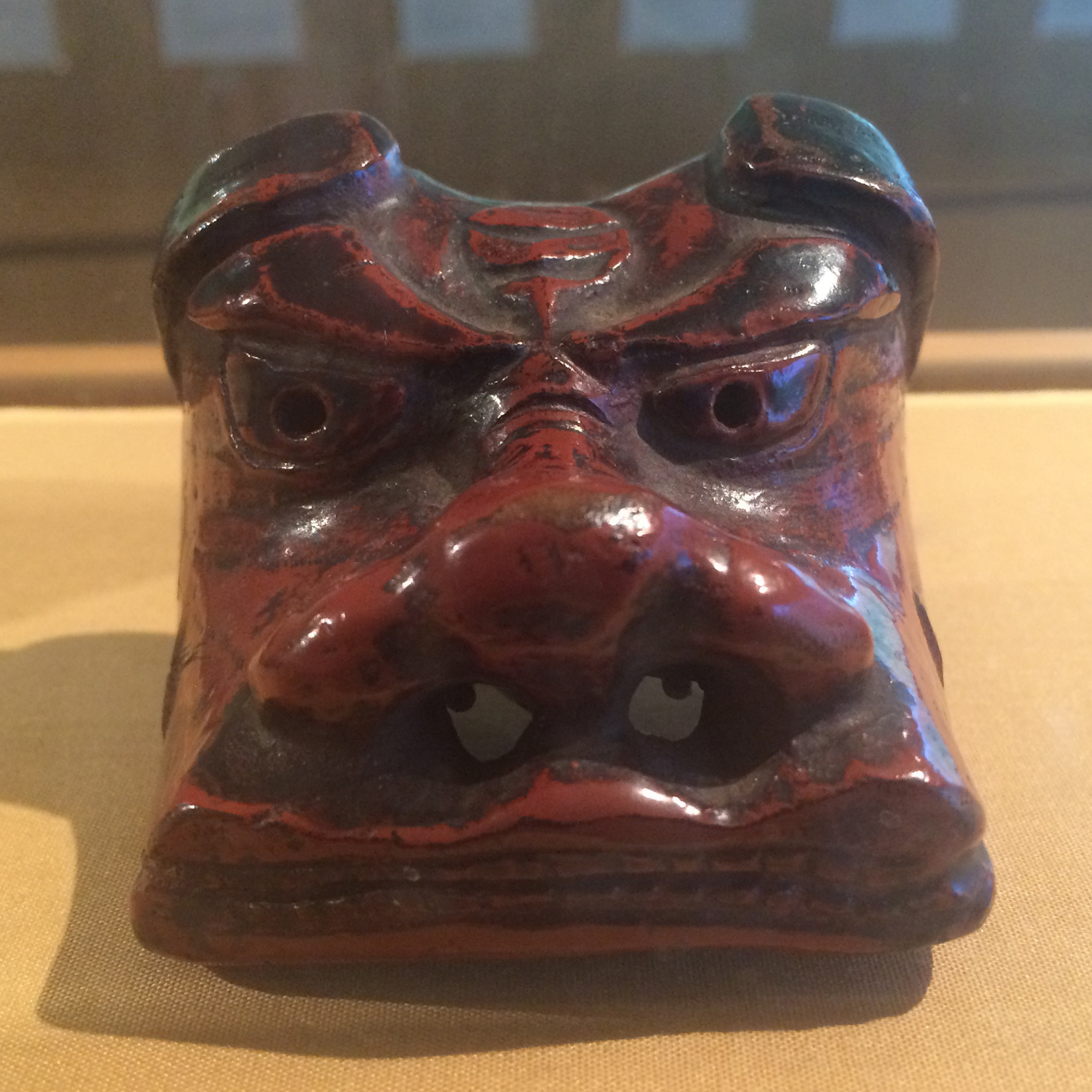 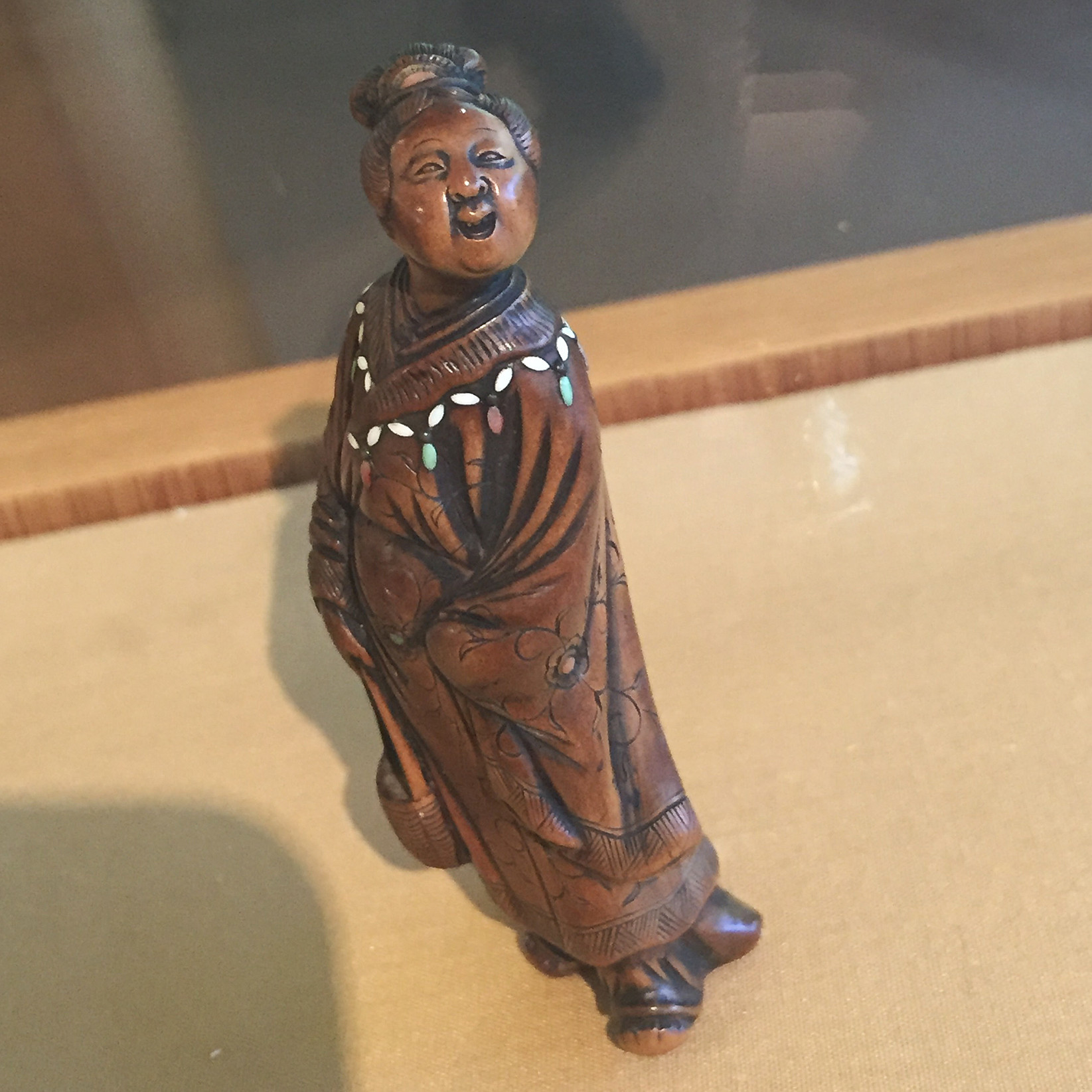 Inside Alejandro Iñárritu's VR border drama at LACMA: What you will see and why you might cry

Warhol, Nico, a naked handstand, a crucifix: The Broad kicks off 'Happenings' with songs and shocks