Zoe Saldana thinks she might raise her kids with another woman one day and is being coy about whether she’s had a relationship with one.

The actress, who plays Starfleet Communications Offiicer Uhura in the upcoming sequel “Star Trek Into Darkness,” revealed more than just her well-toned body for the June Allure. The actress is also unveiling her open-mindedness in the issue, in which she also appears topless and nude.

Uhura, played by Nichelle Nichols in the 1960s series and subsequent movies, is historically noted for having the first interracial TV kiss with William Shatner’s Captain Kirk on the original TV show. Now, in the new film, she’s involved with Kirk’s contentious friend Spock. So it isn’t that surprising that Saldana is brewing up controversy of her own.

The 34-year-old is fresh off a 12-year relationship with entrepreneur Keith Britton and a short-lived romance with Oscar nominee Bradley Cooper. But she said she doesn’t plan to have another celebrity boyfriend and is described as “vigilantly single” by the mag.

“Been there, done that, got the T-shirt,” she said about dating actors. And she’s not the “dithering” type when it comes to her relationships or career.

“If I have something good in front of me — it doesn’t matter if it’s a person or a pair of shoes — I’m not going to test something else,” she said. “It’s insecure, and it’s immature.”

What’s more is that she’s pretty proud of her “androgynous” upbringing, saying one day she might “end up with a woman raising my children... that’s how androgynous I am!”

She said she was “raised that open” to bringing up baby with a woman as her partner. Asked whether she’s has a relationship with a woman, the actress said, “just put three dots as my response. That’s it.”

But Saldana is singing a different tune than the one she had for Latina magazine this year.

“I don’t want to need things,” she then told the mag. “I need water, you know what I’m saying? I need to exercise, I need to eat. To be with a man should be a want. I don’t need anybody. And the people that I do need are just family, tu entiendes? ... But a man is something that I want, I want to be with a partner, because this partner is going to add or I’m going to add to this partner.”

The actress also insists that she’s “always been a somebody” and has that attitude when it comes to detractors of her new role as Nina Simone, the jazz musician and civil rights activist.

“Let me tell you, if Elizabeth Taylor can be Cleopatra, I can be Nina — I’m sorry,” Saldana said, unapologetically, according to the mag. “It doesn’t matter how much backlash I will get for it. I will honor and respect my black community because that’s who I am.”

The part Dominican and part Puerto Rican actress also spoke up about feminism.

“It’s hard enough to be a woman on this earth. So to be an American or black or Latina, it’s arbitrary compared to our battles as women.”

The June issue, in which Saldana exposes her “115 pounds of grit and heartache,” hits newsstands May 21. 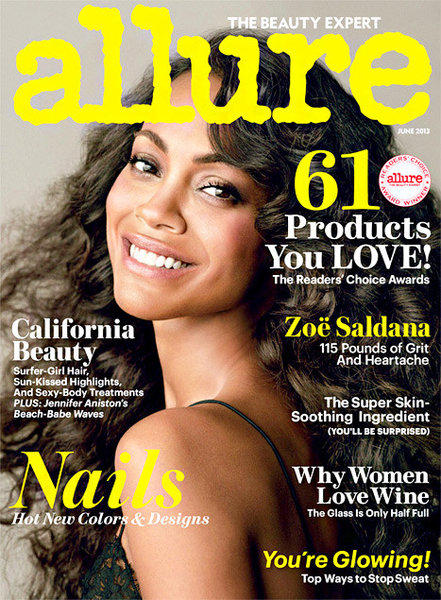