Dalgona Tiramisu is the dessert we all need right now

As the Dalgona coffee trend has taken off in the last couple weeks thanks to home quarantining, many of our readers have commented on how delicious the drink’s magic mousse-like fluff is on its own: good enough to eat with a spoon, in fact. Well, let’s take that one step further, shall we?

Using those comments as inspiration — and an Instagram story from my British friend Edd Kimber, who shared how to make vegan mousse utilizing the thickening properties of instant espresso, a tip picked up from vegan chef Richard Makin — I set about making a full-on dessert from said Dalgona fluff by taking advantage of its strength and sweetness.

First, I took Kimber’s suggestion and used equal parts granulated sugar and light brown sugar to lend a slight molasses edge to the fluff (which consists of granulated sugar, instant espresso and boiling water) that paired well with the coffee flavor. Adding a little vanilla and salt rounded things out.

But there was still the question of stability. As anyone who’s ever dealt with leftover Dalgona fluff can attest, the mixture eventually separates into liquid espresso and airy foam. Instead of folding in melted coconut oil, as Makin does for his vegan mousse, I wanted to use an ingredient that had the necessary stabilizers to keep everything together. Melted bittersweet chocolate chips proved to be the answer I was looking for — the stabilizers in the chips help hold the fluff together — and since I wasn’t bound by making the recipe vegan, I added some whipped cream for softness and to help cut the intensity of the instant coffee. I thought there was no improving it from here.

Then, while texting with a friend about the idea, he suggested making a tiramisu out of the improved fluff. Brilliant! All of the flavorings of the classic pseudo-Italian dish were already in the mousse. So, I set about layering the mousse with packaged ladyfingers (not shockingly, there were plenty left in the grocery store) and let it sit overnight in the fridge. Reader, what a success! The small amount of excess espresso that separates from the mousse absorbs directly into the ladyfingers, eliminating the pesky “Am I doing this long enough?” coffee-soaking step in traditional tiramisu, and allowing the cookies to further help stabilize the dessert.

This recipe is made for one or two people — providing just enough to dig at with spoons from the open fridge for two or three days, or at least until you remember to get back to that at-home workout routine you’ve totally been keeping up with. 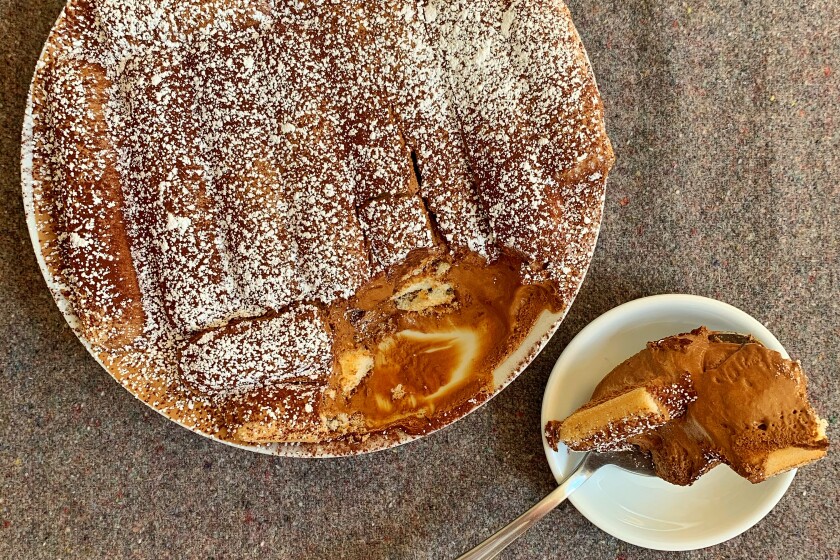