Stop salting steak before you cook it

With so many of you having to stay home and cook for the first time — ever or more than you have in a long time — we get that it can be overwhelming to have to cook all your meals from scratch. So, we’re here to get you started.

Each day we’re going to post a new skill here and go in detail about how to do it — a resource for cooking basics so you can get food on the table and get through this.

Lesson 29: Restaurant-style steaks
Along with every person who’s ever watched a cooking show in America, I was taught that salt equals flavor and to shower my steaks with it before cooking. This, ostensibly, seasons the meat deeply with a thick crust of salt so that when you bite into each piece, the salinity spreads out over the bite evenly in your mouth. We’re told that most of that salt will fall off in the pan and to not worry about over-salting it.

A less existential concern but one many of us have: how to cook a steak at home without setting off the fire alarm.

Fortunately for me, the answer to both is simple: Don’t salt the meat. (Or, at the very least, the first side.)

In the absence of salt, the first side of the steak becomes dark golden and crusty in just 2 minutes and with only a few wisps of smoke to show for it, not the caustic plumes that usually permeate my eyeballs when a salted steak, which needs double the time, has spit hot oil and water all over the kitchen.

While the first side is cooking, season the top side generously with salt. Then flip the steak and put it immediately into a 400-degree oven. That half-salted steak is perfectly seasoned, not overly salty as many restaurant steaks can be. (And you could always have some flaky Maldon salt at the table for anyone who needs that steakhouse effect.)

I replace any missing salt with an umami-packed green sauce. Chimichurri and other herb sauces are my preferred choice for steak because their grassiness and acidity cut through the meat’s richness better than anything else.

Parsley is my go-to green but the one green thing I know most everyone in America has in some shape or form (possibly withering in the crisper?) is kale. I finely chop a few leaves and use them as the base for my sauce, their iron-y essence amplifying the steak and harkening back to the classic steak garnishes of the 1950s.

Once the steak comes out of the oven, I immediately transfer the meat to a plate to let it rest for a few minutes. I pour some olive oil into the steak skillet and sauté capers, garlic and the kale for a couple of minutes until tender and just starting to brown at the edges. Toss in a couple spoonfuls of water to stop the cooking, then stir in a couple tablespoons each of soy or Worcestershire sauce and red wine vinegar. The liquids loosen the crusty bits and salt stuck to the bottom of the skillet, which dissolve into the sauce and season it. I stir in any meat juices that collect on the plate where the steak is resting to further layer on flavor before pouring the whole thing over the sliced meat.

The whole operation takes less than 10 minutes — minus waiting for the oven to heat, of course — and I didn’t have to disable my fire alarm. All that AND a perfectly seasoned steak? I can’t imagine why I didn’t think of this before. 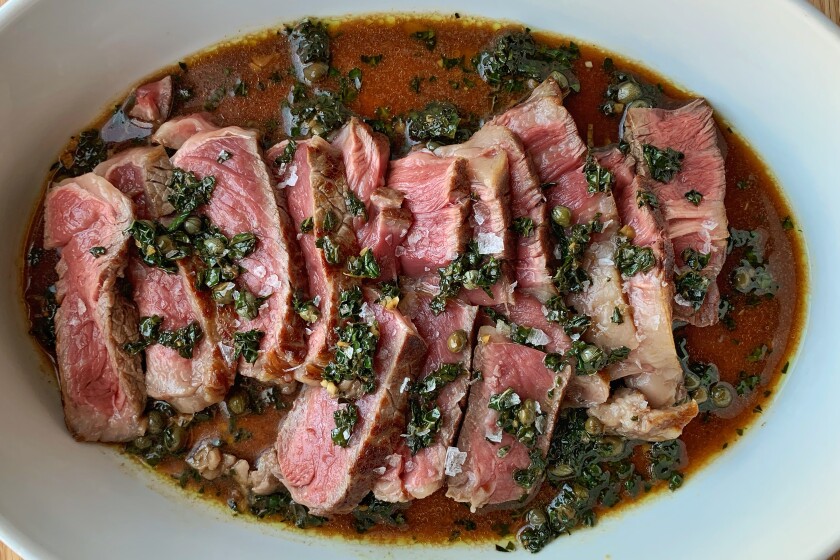