Do try this at home: easy three-ingredient chocolate soufflés

With so many of you having to stay home and cook for the first time — ever or more than you have in a long time — we get that it can be overwhelming to have to cook all your meals from scratch. So we’re here to get you started. Each day we’re going to post a new skill here and go into detail about how to do it — a resource for cooking basics so you can get food on the table and get through this.

A chocolate souffle feels like a win — something we all need right now — and unlike some tricky recipes for this notoriously difficult-to-master dessert, this foolproof three-ingredient quarantine version won’t add to your anxiety. Instead, it will give you a dining-in-a-fancy-restaurant feeling without costing much.

Know this: Even if your soufflé doesn’t tower, it will still taste delicious. Under-puffed, it will be something closer to a molten lava cake, which isn’t a bad thing at all. But it’s not hard to get it right if you follow these tips.

Even before you start making the batter, you can prep your baking dishes to ensure an impressive rise. For the tallest soufflés, you want to use 4-ounce (3 ½-inch diameter) ceramic or glass ramekins with straight sides that don’t flare. Once you’ve buttered the bottom and sides, shake granulated sugar in them to coat the buttered surfaces. As the batter rises, it will cling to the sugar, climbing up the sides of the ramekins as it heats. To ensure the sugar stays in place, chill the prepped ramekins while you make the batter so the butter stiffens.

If you want to splurge on fancy chocolate here, go for it and finely chop a good hunk. But if all you have is chocolate chips, those work great too.

Eggs play the biggest role. Yolks simply stirred with the melted chocolate and condensed milk enrich the dessert. Whites whisked into billowy clouds provide the lift. For surefire success, start by separating the eggs while they’re cold. The whites can’t have even a drop of yolk to whip properly, and cold yolks are less likely to break.

Once the eggs are separated, let them come to room temperature to ensure stable foamy beaten egg whites. Whisking egg whites is easy, especially if you have an electric mixer. The only difficult part for the inexperienced is knowing when to stop. But now, you can find images or tune in anywhere (including our Instagram Live of this dish tonight at 6 p.m. Pacific) to see just what your whites should look like. In this case, you want medium-stiff peaks, which means when you lift the whisk from the whites and turn it upside down, the whites will form a peak and the very tip will curlicue back down.

The final step of folding in the whites requires a gentle touch. To avoid deflating the whites, first stir a third of them into the chocolate. This initial addition does, in fact, deflate while mixing with the thick base. In the process, it loosens the batter to make it easier to fold in the rest. When adding the remaining whites in two batches, gently dollop the whites in the center of the chocolate. Run a large silicone spatula from 12 o’clock to 6 in the bowl, then slide it against the side of the bowl while rotating the bowl and folding the batter back toward the center. You’re now back at 12 o’clock. Repeat this motion while turning the bowl until only a few white streaks remain; do the same when folding in the final batch of whites. By the end, you want the whites to be just incorporated.

Work quickly but with a light touch to scrape and pour the batter into the prepared chilled ramekins. At this point, you can cover them with plastic wrap and chill until you’re ready to bake. If you’re only baking for one or two people, you can refrigerate the others for another night. Otherwise, put all of the ramekins on a rimmed baking sheet to make them easy to slide in and out of the oven. Once they’re in, don’t fuss with them. Leave the oven door closed but turn on the light so you can watch the magic you just created. 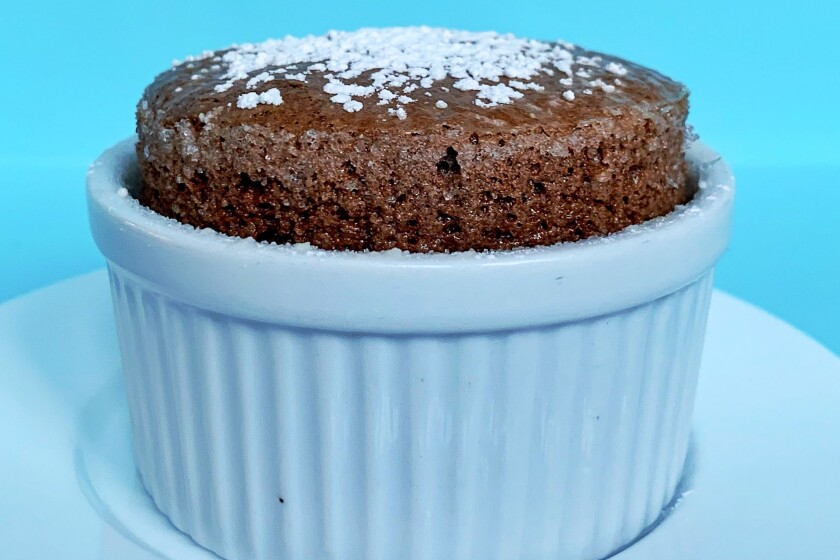