How Newton Nguyen is inspiring a young generation of home chefs

The 21-year-old is the son of Vietnamese immigrants; he lives with his family in a mobile home in San Jose. As a young boy, he used to make Spam musubi with his mom and sell up to 100 per day at school.

“I grew up in a low-income family, so I didn’t feel comfortable taking money from my parents,” he said, noting that his mom is an excellent cook and has worked professionally in restaurants.

It wasn’t until last year that Nguyen taught himself to cook. It was a way to take his mind off things and cope with depression, he said.

He learned the basics watching cooking tutorials on YouTube, where a video might last half an hour — and that’s where he got the idea that he wanted to make his own cooking videos, with unvarnished demos edited to appeal to a short-attention-span generation of watchers like himself.

Using TikTok, YouTube and his Twitter account (@milktpapi), he set out to teach the world to cook, as so many have, except that his fourth video — a narrated version of his take on the mega-popular Popeyes fried chicken sandwich — immediately went viral; it has racked up 3.7 million views and 230,000 likes since November.

His popularity has grown during the pandemic: With shelter-in-place restrictions across the country, Nguyen’s cooking videos have offered some respite for sequestered Americans.

His Twitter following recently surpassed the 1 million mark; on TikTok he has 4 million fans who tune in a few times a week to his videos on how to cook elote, pizza bites and a particularly memorable clip of “synonym roll waffles.” Fans have called him a “whole blessing” and a “national treasure.”

For his family members, Nguyen‘s swift rise to stardom has been stunning. “I never really saw something like this happening to us as a family,” his older sister Yvonne, 23, said. “We came from a family who didn’t have much, you know? Very little, because our parents are immigrants.”

What is it about Nguyen that resonates with so many viewers, particularly younger ones? In the age of ephemerality and fickle viewing habits, how has his cooking content managed to stand out?

Inspired by none other than @milktpapi this mans rly be out here motivating me to start cooking again 🥺😌 https://t.co/OBgNS9Tj2V pic.twitter.com/OSlt67x3lf

The videos are easy to follow — and short. His style is consistent and effective; his recipes have built a microcosm of predominantly young, first-time chefs with a penchant for TikTok-able entertainment.

“I’m just a regular guy, and not a chef at all,” Nguyen said. “I’m genuinely having the time of my life while I’m filming these videos, and I think the viewers can tell when content is coming from a real place.”

Nguyen is resourceful and pragmatic — often pulling ingredients from his garden or swiping lemons from his neighbors. His batterie de cuisine — a portable burner and his pajamas — are relatable, especially now. To keep up with the demand, he quickly taught himself to edit video, so he could make more polished videos, faster.

“People kept making tweets like, ‘You guys put parsley on everything and think it’s a gourmet meal!’ so I thought that was funny, and just started putting parsley on everything.” (See parsley merch — it’s for a good cause.) He takes his originality seriously, admitting he’s even stopped watching other content creators’ cooking videos, for fear he might subconsciously use their jokes.

The night he posted the Popeyes video — in which he ponders the age-old question “fried chicken or golden retrievers?” — he went to sleep with 2,000 followers. The following morning, “I ran out and told my mom, ‘Mom, I got 50,000 followers!’ She was like, ‘What does that even mean? Does it make you any money?’ I was like, ‘No, I got zero money.’ Then she was like, ‘So who cares?’”

Millions of people, it appears. He was dumbfounded that people were drawn to his content.

Since then, Nguyen’s consistency and dedication to his videos have paid dividends, as the shorts routinely amass anywhere from 80,000 to a quarter-million likes. His recipe repertoire is diverse and includes lumpia, lobster garlic noodles, bulgogi, shrimp scampi, tomato vodka pasta, fried rice and cinnamon roll waffles. 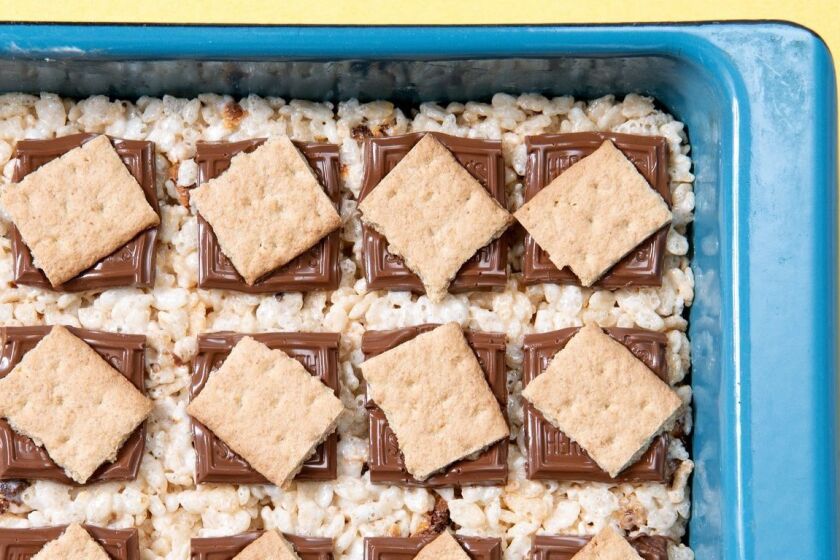 Easy desserts to make during quarantine

Typically, what the Internet sees is both his first and final take.

“Usually [the videos are] one-shot-wonders because I want to keep the process as genuine as possible, so if I messed up, I messed up,” he said. “This is the real world, and messing up is completely normal and OK.”

This is the real world, and messing up is completely normal and OK.

Nguyen’s followers often direct-message him recipe suggestions on Twitter and then re-create his dishes at home, sharing the results online.

“I love the fact that you can get some amazing Italian food, high-quality sushi and award-winning tacos within a 15-minute drive of each other,” he said.

In the coming months he is planning to experiment with an air fryer and hoping to establish himself as a bankable brand.

But, Nguyen said, knowing that he’s able to entertain and make a positive difference in someone’s day means the world. “I just want to emphasize that cooking really is easy, and people should not be intimidated by it.”

Genesia is on the Los Angeles Times Product and Innovation Lab team. Prior to joining the Times, she designed products for the Census Bureau’s Open Innovation Labs, Mapbox, Airbel Impact Lab, International Rescue Committee, and other social impact organizations. She graduated from the University of California, Davis, with a degree in design.