The best romanesco dish is teeming with Sicilian flavors

In my mind, the seasons at the farmers market aren’t really defined by the calendar; they are marked by what I like to obsess over for months at a time. It usually goes something like this: Rhubarb! Strawberries! Cherries! Stone fruit! Apples! Pomegranates! Persimmons! Citrus! And then I catch up on an array of delicious but less lust-inducing green vegetables to balance my diet of fruit until spring’s new berries show up once again.

We’ve just begun that last “season,” so my mind is fixated on all the colorful crucifers and various knobby roots that dominate the winter market. My current obsession is with romanesco and its chartreuse crown of cones. Because it is essentially the more punk cousin of cauliflower, you can treat it just like that vegetable. But I always feel bad breaking up the romanesco’s beautiful spikes, preferring to cook them in a way that maintains their aesthetic identity.

To do that, I cut a head through its core into six large wedges so I have manageable pieces with two flat sides and a third side full of the vegetable’s peaks and valleys. I rub the wedges with olive oil and blister them in a hot oven, which is really the best way to bring flavor to the otherwise mild-tasting vegetable. While the wedges singe, I get on with an assertively flavored sauce to go with it. Any sauce will work, but because of romanesco’s provenance and popularity in Italy, I have my eye on that country’s southernmost region, Sicily.

Inspired by the island’s classic pasta con le sarde, I mix pine nuts, golden raisins and the tiniest pinch of saffron — ingredients that speak to Sicily’s history of trade with nearby North Africa — with browned shallots and sardines into a pungent red gravy. Since the sardines are the focus of the sauce, buy the highest-quality tinned version you can find — La Brujula are my favorite, but Crown Prince’s “natural” sardines packed in olive oil are a great grocery store brand.

I add a touch of tomato paste, which isn’t traditional but helps tie all the aromatic seasonings together into a hearty sauce that gets draped over the burnished romanesco and seeps into all its nooks and crannies. A final showering of crisp breadcrumbs adds a wonderfully crunchy texture to this dish built around a vegetable with such a personality that it has, in my view, earned its own “season” alongside the greats. 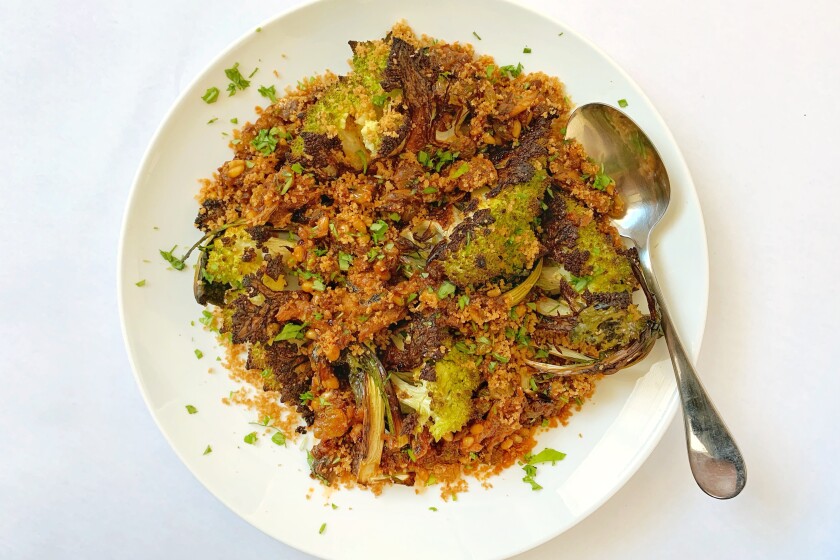