Last spring, I picked up a slice of banana bread at a women-in-food potluck and after one bite, asked, “Who made this?” All fingers pointed to Valerie Gordon, the renowned pastry chef and chocolatier behind Valerie Confections in Echo Park.

Its uniqueness wasn’t just in the delicious flecks of dark chocolate or the surprising sweet-and-salty crunch of the peanut topping, it was the banana bread itself. Full of banananess, the not-too-sweet loaf was neither dense nor fluffy. Instead, it tasted almost creamy like banana pudding but with the fine firm crumb of pound cake.

When I asked Gordon how she did it, she leaned in like she had juicy gossip and said, “It’s vegan.” I think I audibly gasped.

Even though I’m not vegan, I’m pro-vegan (enough to start the Plants column here) and have developed plenty of plant-based dessert recipes. At that moment, I realized that I held onto the notion that a vegan version couldn’t actually taste better than the classic.

This banana bread proves it can. I always prefer oil-based banana breads over butter ones anyway; Gordon’s goes a step further by omitting the eggs.

Unless a dessert relies on eggs for flavor (think custard), the eggs help glue together the other ingredients and give them rise as a leavener. Ripe mashed bananas bind baked goods well on their own and chemical leaveners — baking powder and baking soda — lift the batter enough to prevent it from ending up as heavy as a brick. Without eggs, the resulting loaf develops a more intense banana taste without the risk of drying out.

For the best possible version, use bananas ripened to black. They’ll border on liquid and mash easily while providing the deepest banana flavor. And Gordon’s combination of bittersweet chocolate speckled throughout the loaf with a peanut crumble on top makes this truly special. 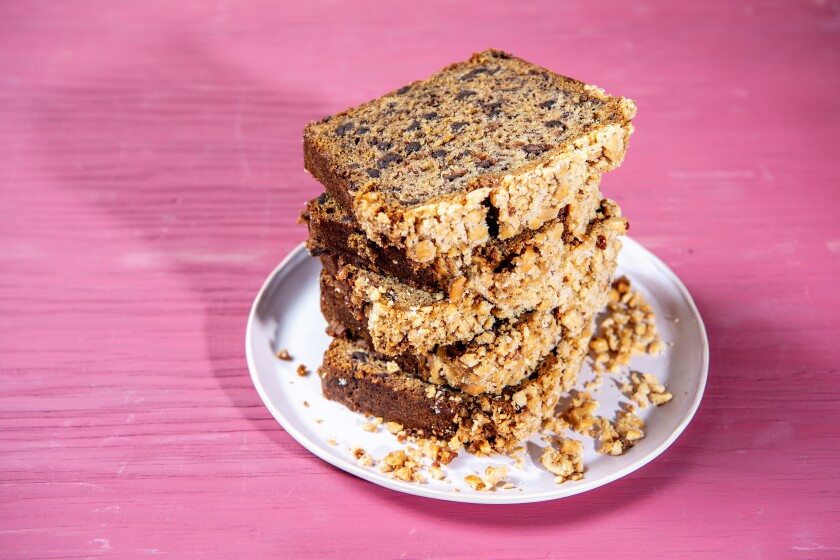