With so many of you having to stay home and cook for the first time — ever or more than you have in a long time — we get that it can be overwhelming to have to cook all your meals from scratch. So, we’re here to get you started.

Each day we’re going to post a new skill here and go into detail about how to do it — a resource for cooking basics so you can get food on the table and get through this.

A little less than 7 ½ years ago, I moved to San Francisco with $20 to my name. The night I landed, the San Francisco Giants had just won the World Series, causing, ironically, apocalyptic rioting in the streets. After spending $8 to get from the airport to Bernal Heights on the train, I set my bags down in my friend’s living room, where I’d live for free for the next six weeks, and walked out into that eerie atmosphere to the corner bodega for food. I bought the cheapest thing I could live off of with my remaining cash: a box of dried spaghetti for 99 cents and a jar of Ragu marinara for $1.99.

By skipping breakfast each day, I made those provisions last for four days’ worth of meals, buying two more boxes and jars over the next two weeks before I was given $60 in cash for one day’s work rolling croissants at a commercial bakery in Emeryville, which I walked to in order to avoid paying for the train ticket to get there (it took a little over three hours and cost $3 for the unavoidable one-stop train ride across the Bay from the Embarcadero to West Oakland). In that desperate time, those tiny bowls of cheap pasta with a couple spoonfuls of tomato sauce were the only thing that kept me going.

These past two weeks have created equally desperate times for a lot of people who’ve lost their jobs due to COVID-19-related business closures, and right now, a bowl of pasta with tomato sauce is probably what many of us are needing to eat to keep going. The dish nourishes with limited resources, so I want to show you how to make it with minimal effort. However, unlike my bare bowls of sustenance, you can make a satisfying pot of tomato sauce with a few added ingredients that you more than likely already have at home to serve over whatever pasta you managed to get at the grocery store. Here’s how I do it:

First, heat up a couple tablespoons of olive oil in the largest pot you have (this detail will come in handy later) over medium heat (basically, get the heat to the halfway point between full blast and “Is the flame even on?”). Add a handful of chopped onion — it can be fresh from a whole onion, a leftover chunk in your fridge or the prechopped kind from Trader Joe’s — and let it cook, stirring it here and there, until it gets soft and is lightly browned at the edges. Next, stir in some chopped garlic. Again, this can be a clove or two or a spoonful of the minced stuff from the jar; no judgment! Let that cook for about a minute, until it’s fragrant but not browned.

Then, add some tomato paste. This isn’t absolutely necessary but it will add a stronger depth of tomato flavor to the sauce. I like to keep tubes of the double-concentrated stuff on hand because I can squeeze in a blob and then cap it to keep everything clean. But if you have a can, use it. Let that cook for at least 2 minutes, stirring often, to cook out the raw flavor of the paste and caramelize it slightly in the oil.

Next, stir in your tomatoes. Ideally, this is a 28-ounce can of whole peeled tomatoes, but if all you have are canned tomatoes of the chopped/crushed/puréed variety, use those. Whatever you use, fill the can with about 1/2 cup of water from the tap, swish it around to remove all the tomato bits clinging to the side of the can and pour it in the pot. Have an errant pint of cherry tomatoes or a couple vine-ripe tomatoes? Stir those in too; just make sure to roughly chop them first.

If you used whole peeled tomatoes, crush them with a wooden spoon or potato masher so they blend into the sauce. Now you can flavor the sauce more, if you want. If you happen to have fresh basil, toss in a branch or two, but I keep dried basil and dried oregano on hand for my marinara, so I add them; 1 teaspoon of each will do. Same with crushed red chile flakes, if you want a little heat to your sauce. Give everything a stir to combine, then adjust the heat to allow the sauce to come to a bare simmer; you should have steady, gentle bubbles breaking the surface of the sauce. That big pot you’re using is coming in handy now, preventing any napalm-like splatters of sauce from jumping outside of the pot and onto your counter or, worse, your hand. Cover the pot and let the sauce simmer for 10 to 15 minutes, stirring it once or twice to prevent any sauce sticking to the bottom. You’ll know when it’s ready because it’ll look like, well, tomato sauce.

While the sauce is simmering, bring a pot of water to a boil. Stir in a handful of kosher salt, then add your pasta. Half the box (about 8 ounces) will suffice to handle the amount of sauce you’re making. Give it a stir as soon as you add it to the water (pasta releases most of its starch in this first minute, so stirring immediately prevents the pasta pieces from sticking to each other), then let it hang out, stirring every couple of minutes, until it’s cooked to al dente according to whatever time the box says. Don’t blindly trust the timing on the box, though; the only way to truly check the doneness is to take a piece out and taste it. Use tongs for strand-style pasta like spaghetti or a spoon for short, stubby shapes like penne or fusilli; set it on a plate or cutting board for a second to cool, then eat it and see how it chews. If it yields gently to your bite, it’s done. If you feel any resistance in it whatsoever, it still needs a little time.

Once the pasta is done, dunk a liquid measuring cup in the water to scoop out about 1/2 cup of the cooking water and set it to the side. Drain the pasta in a colander and let it hang out there until the marinara sauce is finished cooking. Once the sauce is ready, add the pasta to it and give it a stir to coat. If you want your sauce a little looser, pour in some of that cooking water to loosen it. And because the cooking water has starch from the pasta in it, it will help the tomato sauce cling to the pasta sauce even better.

Use tongs or a big spoon to hastily get your pasta on a plate. Shower it with some freshly grated Parm or a couple shakes from the plastic tub — again, we’re working with what the grocery store shelves are giving us these days — and dig in to probably one of the simplest, best meals you’ll have eaten in weeks.

Once you’ve tackled marinara with spaghetti, try these other simple pastas: 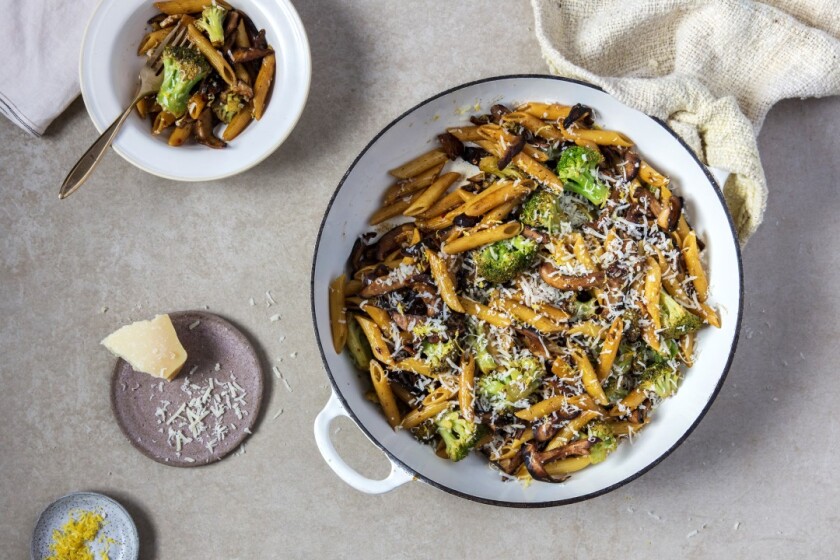 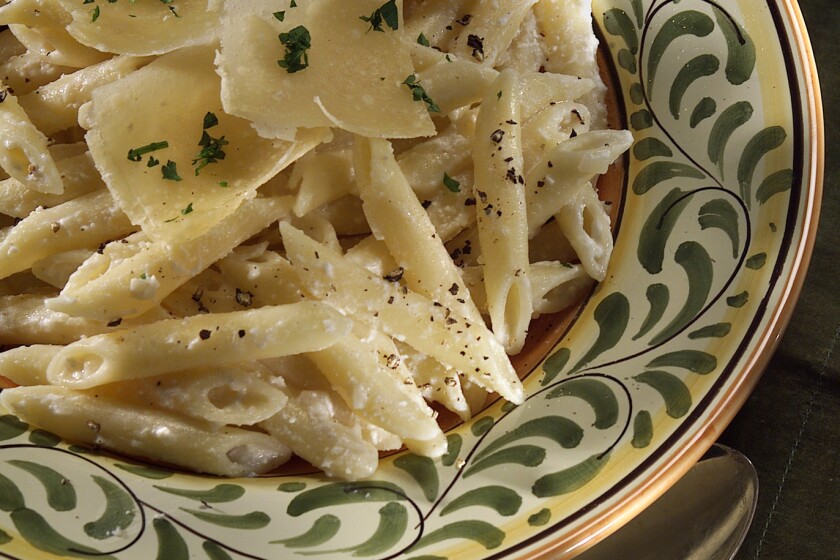 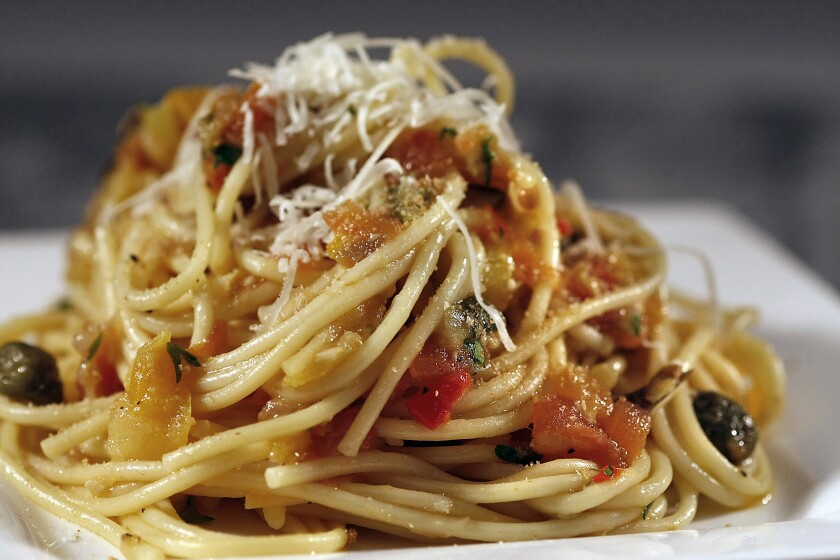 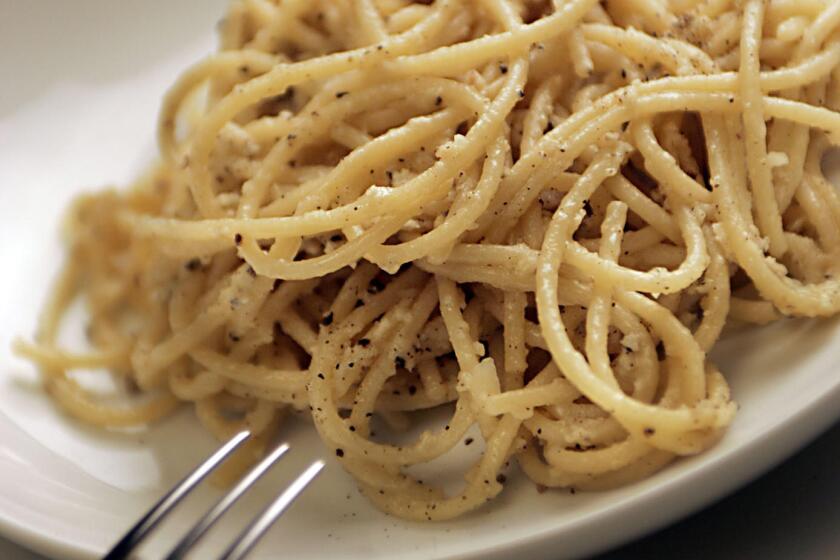 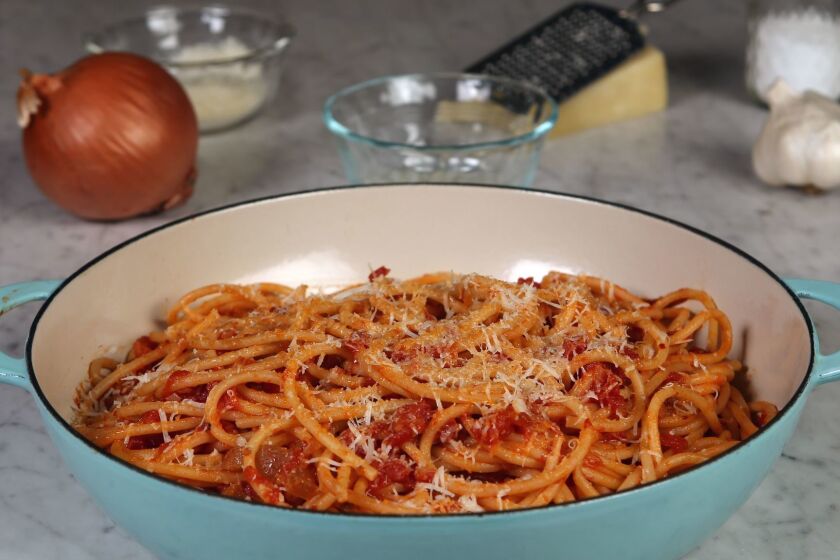 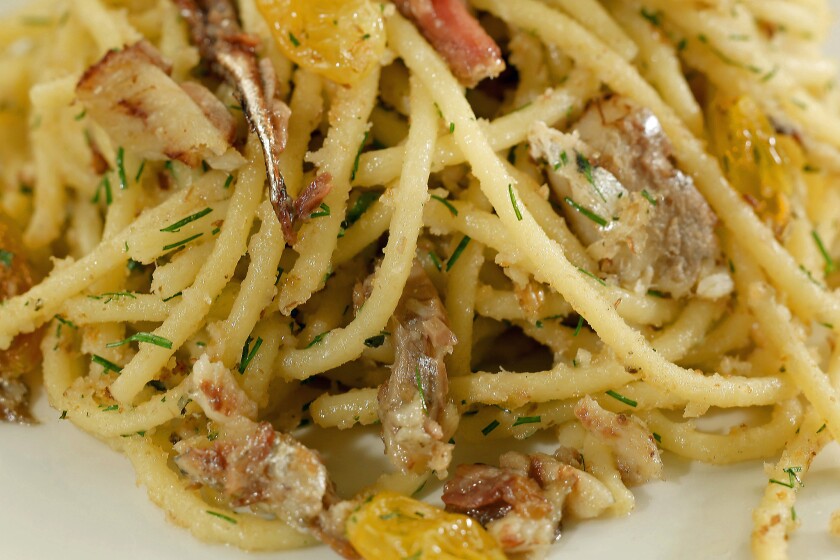 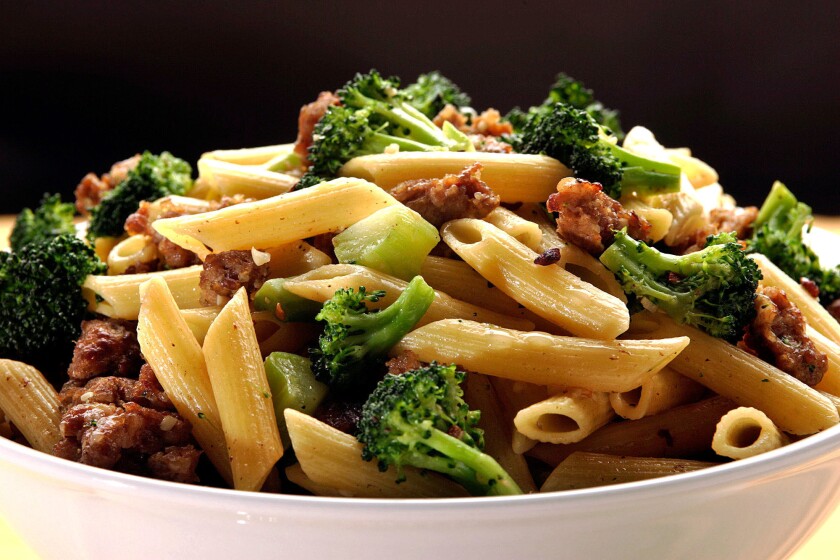 Pasta with Italian sausage and broccoli