Make your own pickled jalapeños for tacos and so much more

Chef Claudette Zepeda doesn’t just like verduras encurtidas — she needs them. The pickled vegetables were a staple of her childhood, a jar of them anchoring the kitchen table on a big round plate alongside the salsa and salt.

“I always have to have acid and salt with my food, even if what I’m cooking has nothing to do with Mexican cuisine,” she says.

Zepeda’s version of verduras encurtidas is inspired as much by Mexico as it is by San Diego, where she now lives. Her family has roots in Tijuana, Guadalajara and Nayarit, Mexico, and she has traveled through all seven regions of Mexico to taste the cuisine’s full range, including its pickles, known as both curtidos and escabeche.

She created her own pickle condiment for El Jardín Cantina in San Diego when she was the executive chef. “Everyone knows the flavor of taco-shop pickled jalapeños with carrots, so I didn’t want to mess it up or reinvent the wheel. I just wanted to put the garden into it,” Zepeda said. To highlight the crunch of the vegetables, she slices them very thinly and steeps them like tea in a brine spicy with chiles.

Zepeda pickles whatever is in season, which means cucumbers and chiles in the summer, breakfast radishes and asparagus in the spring, romanesco and potatoes come fall. To avoid food waste, she tosses in items that most people would consider scraps, such as broccoli stems, squash vines and cilantro and epazote stems. 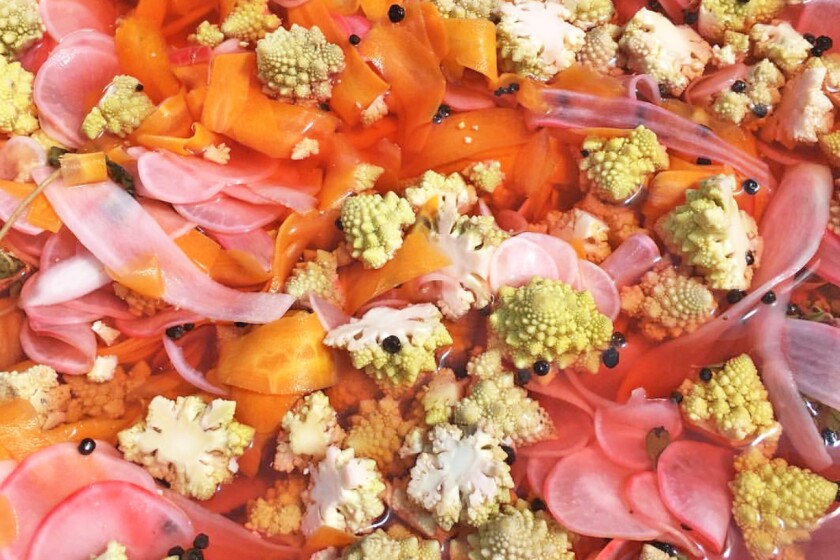 When I first tasted Zepeda’s verduras encurtidas — mild in spiciness and bold in sharpness — at her former restaurant, I was blown away by how its complexity matched that of the main dish. Another reflection of her modern, refined cooking, her verduras easy to make and pair especially well with fatty grilled meat.

Along with Zepeda’s recipe for crisp, bracing verduras encurtidas, here is my take on the taqueria pickled jalapeños of my beloved East L.A. haunts from my childhood. The quartet of chiles, carrots, onion and garlic in a flip-top jar was ever present and offered a little sweetness along with its spicy tartness. This take resembles my favorites in that the vegetables are still a little crisp but not crunchy. In fact, they’re almost juicy — though never mushy — and rich from a quick sizzle in oil, prepickling.

That initial sauté tames the bite of raw onion and garlic, heightens the sweetness of carrots and brings out the green pepper side of the jalapeños. The resulting mellow yet spicy condiment combines a comforting warmth along with a refreshing tang that’s great in tacos or on grilled fish and vegetables. 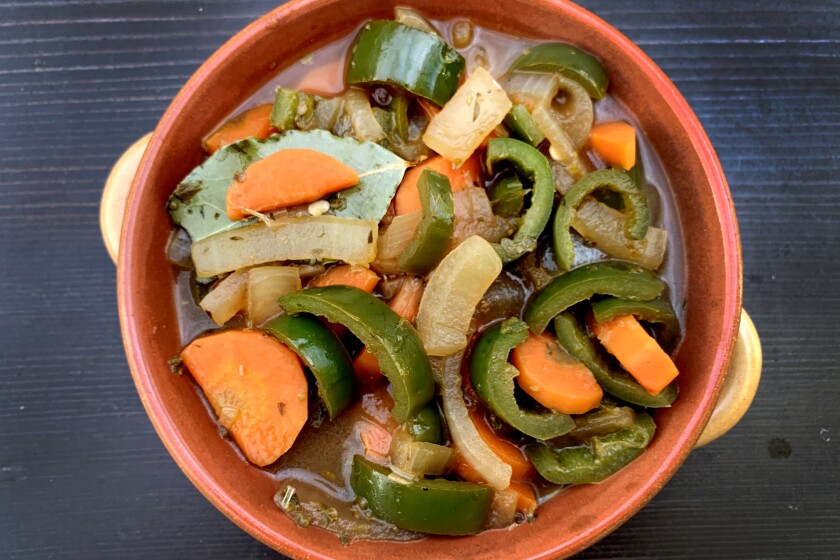 Genevieve Ko is the cooking editor for the Los Angeles Times. She is a cookbook author and has been a food writer, editor and recipe developer for national food media outlets. Ko graduated from Yale after a childhood in Monterey Park.