Want to experience the magic of the L.A. County Fair? Make this funnel cake

The L.A. County Fair isn’t happening this year — it’s closed for only the second time in its nearly 100-year history — so you can’t get funnel cake from a stand, but you can, and should, still have funnel cake. It’s one of those sweets you wouldn’t think to make at home, but it actually comes together more quickly than cookies. Plus, swirling the batter into hot oil and watching it puff into edible art is simultaneously thrilling and soothing, two feelings we need in equal measure right now.

Half a year into this COVID-changed life, I’m learning that I can’t manufacture the setting around iconic dishes, whether they’re from Dodger Stadium or vacation spots. So with this funnel cake, I’m bringing some fair magic to the food itself. (If you want a little carnival ambience, don’t turn on your hood or open any windows while frying and you can get that oily dough smell all over your clothes and kitchen.)

The funnel cake batter is vanilla-basic and the fried dough gets the usual blizzard of powdered sugar followed by big mounds of whipped cream — freshly whisked or shot out of a Reddi-Wip can. It’s the final topping, however, that takes this treat beyond COVID-silver-lining to anytime-best-thing-ever: Lucky Charms marshmallows.

The cereal company is now selling “Just Magical Marshmallows” in shiny pouches that threaten “Limited Edition.” I’m one of those terrible people who says I don’t like artificial food coloring or sugary breakfast cereal; apparently, I’m a liar. Because right here, right now, these marshmallows are all I want. And sure, you can pick through a box of Lucky Charms to collect the marshmallows like prizes in a county-fair game, but I can’t at this moment. There’s already too much and not enough to do during COVID. Just give me the marshmallows.

I want to be able to grab a handful of these magically crunchy marshmallows and crush them all over the whipped cream clouds on the funnel cake, showering on the rainbow bits like pixie dust. Then I want another huge handful of whole ones to throw on top of that.

It turns out that the marshmallows taste like county-fair cotton candy, so a single bite of this funnel cake gives you that feeling of eating another carnival treat while you still have some cotton candy stuck to the roof of your mouth. The technicolor sprinkles dissolve into the cream while the whole rainbows, horseshoes and clovers stay crisp, giving you a multilayered sugar rush. It’s not like going to the fair or better than going to the fair, but it’s pretty great. 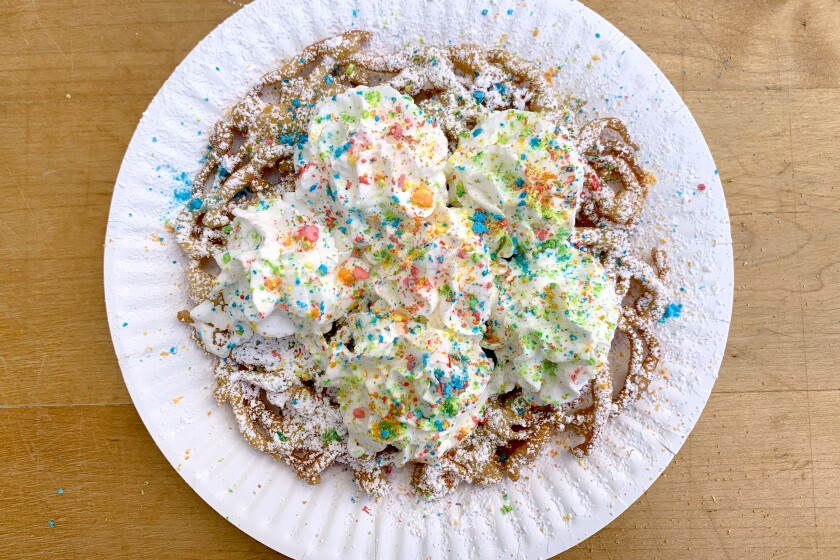