Always in the mood for chocolate

I understand that millions of people believe Feb. 14 is something that should be acknowledged with hearts and flowers. However, the only good aspect of Valentine’s Day for me is that it’s a reminder that chocolate is wonderful, no matter the occasion. And while at my most celebratory, I’d usually buy a heart-shaped box and bite into the bonbons with my partner in an edible game of Guess Who? until we both groan with stomach aches, I figure this year I’ll make a dessert that plays off his and my favorite chocolate flavor pairings instead. There are three that top the list: hazelnut, orange and mint.

For chocolate-hazelnut, or gianduja (i.e., what Nutella tastes like), there’s my Chocolate Chunk-Hazelnut Tart. It’s a chewy, rich tart that eats more like a bougie chocolate chip cookie or a refined Great American Cookies cake from the mall. Toasted and ground hazelnuts are mixed with brown sugar, eggs and butter to create a butterscotch-like filling mottled with chopped chocolate that is then baked in an egg yolk-enriched pastry dough.

One oddity of the tart, I came to find out after several tests, is how dramatically its texture improves after resting overnight. Just like a good chocolate chip cookie, once the tart rests overnight, its filling texture transforms into a chewy, melded confection with a delicately snapping shell of sugar on top. The hazelnut flavor becomes much more pronounced too. I know some science writer out there can explain the phenomenon, but it needs none — just know it’s a result worth waiting for.

The second combination — chocolate and orange — has never really been a big deal in the U.S., despite being wildly popular across the pond and elsewhere around the world. In the U.K. and Ireland, the combo is called “jaffa,” named after a popular treat there that is itself named for the old city of Jaffa in Israel (now labeled “Yafa” and situated as a neighborhood in southern Tel Aviv) famous for growing particularly aromatic sweet oranges that have been exported throughout Europe for the past two centuries. Orange brings out the floral notes in chocolate and, in turn, the chocolate makes the orange taste more appealingly bitter — it’s my favorite of the three.

For my jaffa cake, which is almost fudge-like, I nod to a coffee drink popular in many “nice” coffee shops — an espresso tonic — to help combine the two flavors even better. As the name suggests, the drink combines espresso and tonic water over ice and is often garnished with dried or fresh orange peel to tie together all that bitterness with a hit of floral brightness. I use strong brewed coffee (or watered-down espresso) to marry the chocolate — both melted bittersweet and Dutch-processed cocoa powder — with the orange in three forms: zest and liqueur in the cake and juice as the conduit for an assertively sharp ganache glaze on top.

And finally, there’s chocolate and mint. This is a hard sell to those who don’t like the pairing, but I’m assured by knowing those who love it will stan. I’ve never met a chocolate and mint-flavored food I didn’t love: mint-chocolate chip ice cream, mint-flavored Oreos and, especially, frozen Girl Scout Thin Mints — IYKYK. Instead of cookies, though, I combine the two flavors into a silky pudding based on one I made when I was a pastry chef many years ago. My trials with getting fresh mint to come through in a cooked chocolate pudding, however, have led to more than my fair share of tribulations.

No matter if you blanch the mint leaves or not, or steep them in hot milk or cold milk, there’s a chlorophyll-y greenness that I can’t reconcile in the finished product — this is supposed to be a pure-pleasure dessert, not a chocolate-flavored salad. So, instead of fresh mint, I turn to chocolate-covered mint candies — often easier to procure than mint extract — to give me the necessary hit of mint I need. After performing a blind taste test among several popular mint candies, I found York peppermint patties to have the best flavor here. Andes mints came in second place, so if you love their different mint flavor, use those instead.

I eschew an egg-thickened cooked custard in favor of a simple gelatin-set pudding to keep the mint flavor at its most potent, unadulterated by the masking fattiness of egg yolks. To elevate it beyond a candy pudding, though, I finish it off with a splash of absinthe. The liquor’s licorice-like, resiny flavor doesn’t really come through as much as it simply balances the candy-sweetness of the mint patties, grounding the flavor in a more sophisticated realm.

All three desserts highlight their respective flavor pairings to the fullest extent and bring maximum pleasure to those who would enjoy them. On a day when chocolate is, ostensibly, as important as love, that’s cause enough to celebrate. 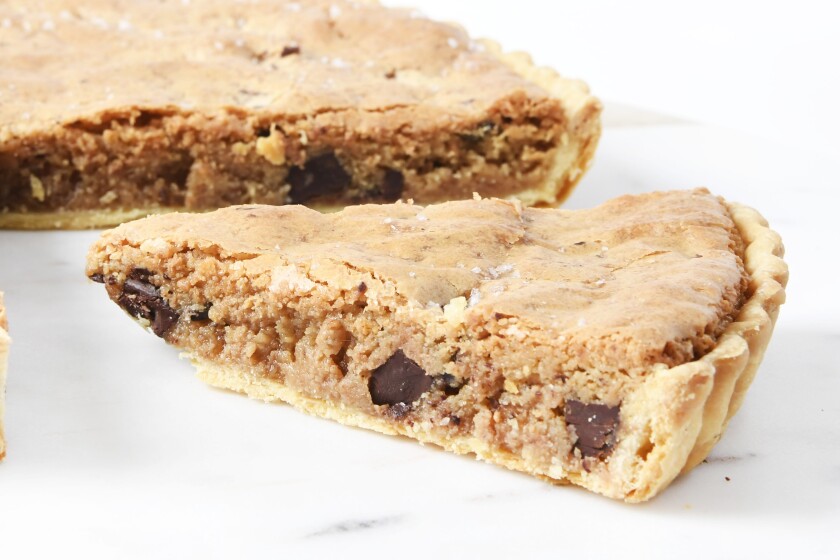 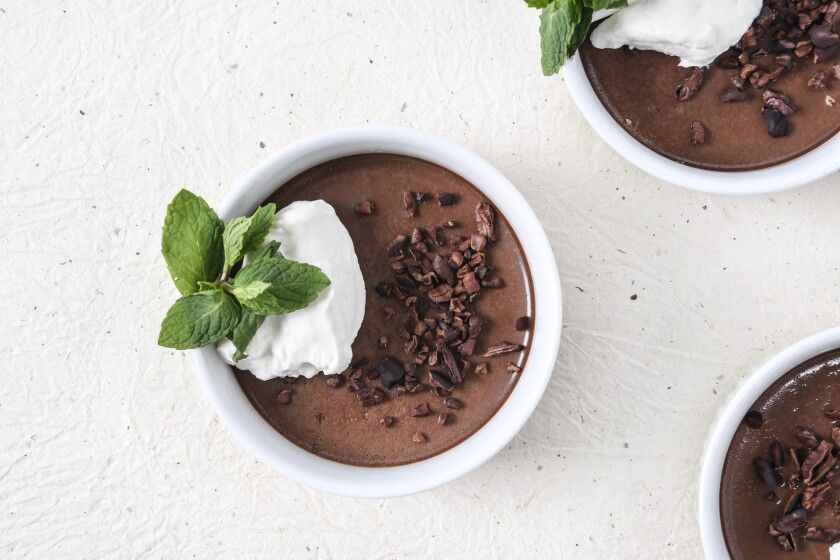