The Chicago Cubs are not happy with how a cake created in honor of Wrigley Field’s 100th anniversary was disposed of following a charity event on Wednesday.

A 400-pound replica of the century-old ballpark, created by the bakery made famous on the reality TV show “Cake Boss,” was on display at the Cubs-Tampa Bay Rays game Wednesday before being transported to the Cubs Charities Bricks & Ivy Ball fundraiser at the Field Museum that night.

At some point, the (wise) decision was made by the team not to serve a cake that had been sitting outside all day. Most of it wasn’t edible anyway.

So the museum got rid of it -- although someone forgot to tell the guy who was in charge of taking the monstrosity by forklift down to the dumpster not to document the whole process on Reddit.

So, naturally, he did just that. And the Cubs weren’t happy with what they saw. 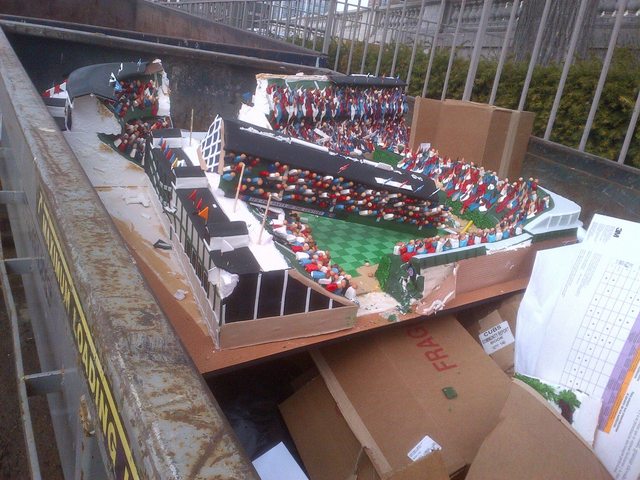 The team said in a statement: “The Chicago Cubs are disappointed in how our Wrigley Field display cake was disposed of by the Field Museum following our successful charity event. The team made a decision not to serve the edible portion after the cake was on display outside Wrigley Field for most of the day. Though the cake was mostly made up of non-edible material, it certainly does not excuse how a celebratory cake artfully created by Buddy Valastro and Carlo’s Bakery was handled.”

Field Museum spokesperson Nancy O’Shea said in a statement Thursday afternoon: “We value our relationship with the Chicago Cubs. We regret what happened and are taking steps to ensure that nothing like it happens again.”

Yes, it has come to this. A professional sports team complaining about the disrespect shown to cake -- and the responsible party actually offering an apology.

No word on when the Cubs are going to apologize to fans for what already appears to be yet another season in the dumpster.

Chuck Schilken is a multiplatform editor and sports writer for the Los Angeles Times.